Canadian growth companies face a $4-billion funding shortfall compared to U.S. rivals that should be filled by tapping the country's pension plans, banks and insurers, according to a study due to be released Tuesday and backed by TMX Group Ltd.

A roundtable made up of Canadian venture capitalists, bankers and executives from the country's largest pension funds found that domestic entrepreneurs are good at launching leading-edge companies but struggle to scale up the businesses compared to peers in the United States and Britain, in part due to a lack of capital.

The study found that over the past decade, the capital available to Canadian growth companies has declined and domestic companies are now only able to access approximately a third as much money as their U.S. counterparts, with the gap growing as businesses get larger. The roundtable estimates $1-billion is needed to fund growth at early stage Canadian companies to match the financing available to U.S. and British businesses, and a further $3-billion is needed to boost more mature innovation companies, which are currently not growing as quickly as they should due to a lack of money for investment.

This money could be found by creating a private-sector "innovation growth fund" backed by pension plans and large financial institutions and renewal of the government-led Venture Capital Action Plan, which sees private-sector capital blended with government money to fund growth companies.

"This is a call to action for institutional investors, for financial institutions, for government and for exchanges," said Salil Munjal, chairman of the Advancing Innovation Roundtable and managing partner at Vancouver-based venture-capital firm Yaletown Partners. He added: "We are not trying to say that every innovation company should be funded. This must be a returns-driven discussion."

The roundtable recommends Canadian pension funds allocate 0.1 per cent of their assets under management, to a ceiling of $100-million, to innovative Canadian companies. The eight largest Canadian public-pension plans have more than $1-trillion of assets and executives at three of those funds – the Caisse de dépôt et placement du Québec, OPTrust and Alberta Investment Management Corp. – are members of the roundtable.

It also suggests banks, credit unions and insurers each allocate up to $100-million to investments in the sector, based on the size of their business. Executives from CIBC, Royal Bank of Canada, Power Financial Capital Corp., Vancity Credit Union and the Business Development Bank of Canada worked on the study. Combined, the pension plans and banks would put up to $2-billion of new financing for innovation companies, which are found across all sectors, including manufacturing, finance and resources, and currently employ 850,000 Canadians.

The federal Liberals are pushing the concept of an innovation growth fund, backed by the banks and insurers, and are in the process of creating the Canada Infrastructure Bank to help fund billions of dollars in projects. The roundtable recommends making digital communications technology part of the new infrastructure bank's mandate and Mr. Munjal said: "Digital infrastructure technology is as important as physical infrastructure."

The roundtable also said Canadian universities and colleges should put more focus on developing managers for innovation companies through measures such as increasing their emphasis on developing sales skills. Mr. Munjal noted that 90 business schools in the Unite States and 15 universities in Europe have programs dedicated to marketing and sales, while similar courses exist at only two Canadian schools. 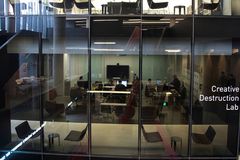