A Toronto information technology company has announced a $160-million cash injection to feed its growth in the expanding market for environmental, health and safety monitoring software.

Mark Jaine, chief executive officer of Intelex Technologies Inc., said the money will go to almost every part of the operation founded in 1992, which he said until now has never taken a dollar from institutional investors.

Intelex software helps companies track everything from pollution and emissions to workplace safety hazards. The company has more than 1,000 clients, including Campbell's, Toyota and Virgin Atlantic Airlines.

"We should finish the fiscal year with 40– or 50-per-cent revenue growth – we've been averaging 40 per cent for the last five years," Mr. Jaine said.

He attributed some of that strong growth to the trend where ever-larger companies have embraced tenets of corporate social responsibility and increasingly force their supply chains to do the same.

The deal is the largest funding raised by a Canadian technology company this year – and one of the largest in recent memory, topping Ottawa-based Shopify Inc.'s initial public offering, which raised about $130-million in May.

The size of the deal immediately puts Intelex into the company of some of the best-known high-growth Canadian tech companies that appear to be on track for an IPO, such as Desire2Learn, BuildDirect or Hootsuite. Those companies and a few others have raised between $60-million and $100-million in recent years.

Deals of this size are not typical in Canada, although in the United States there were 40 such $100-million-plus megadeals in 2014, according to the U.S. National Venture Capital Association.

Mike Woollatt, CEO of the Canadian Venture Capital & Private Equity Association (CVCA), noted that private equity in Canada does not typically spend its dollars on IT companies.

Private equity deals in Canada typically trend toward some form of buyout or add-on spending (which is using PE cash to fund a merger or acquisition). In 2014, about 50 per cent of deals were either for buyout or add-on funding, versus 34 per cent for growth investing.

According to the CVCA, PE deals were tilted toward oil, energy, mining and real estate in the first half of 2015 (about 70 per cent of PE spending). So far, only 2 per cent of the $7.8-billion in private capital spent in 2015 went to IT companies.

"Oil and gas is still about one-third of PE activity. It is to PE what IT is in venture capital," said Mr. Woollatt, who believes that PE growth capital investors have started to look at more industries in recent years as they seek better returns. "IT has so much opportunity. It's different than before. Before [the dot-com crash], it was betting on a market that didn't exist yet. … Now you've got a huge market there."

Both JMI Equity and HarbourVest Partners have been active in Canada before.

JMI Equity is a growth investing firm that has previously backed Eloqua Corp. (acquired by Oracle Corp. in 2013 for $1-billion) and Gemcom Software International (which Dassault Systèmes paid $360-million (U.S.) to buy in 2012).

Boston-based HarbourVest Partners has set up a venture fund in Canada that is one of the institutions chosen to get federal funds as part of the Conservative government's Venture Capital Action Plan. It was an investor in Ottawa-based Kinaxis Corp., which went public in 2014.

Intelex's compliance and tracking software is oriented toward mobile devices, offering enterprises 100 apps for all situations. The company also makes available a software development kit, so a client such as Johnson & Johnson can customize 130 apps specific to its needs and run them on Intelex's software-as-a-service platform.

"In a lot of places, we are replacing spreadsheets – a lot of the data is human interaction being collected in real time," Mr. Jaine said. "If an incident occurs or a spill occurs, they will pull out a Web app and report it right away." Executives can monitor all of this data with custom data visualization dashboards on mobile or desktop devices.

Mr. Jaine, 38, is not a software engineer, but he learned a little bit of every part of the business as he cajoled the company to expand from desktop PC software to Web-based and now mobile-oriented.

The son of one of the company's founders, he grew up in California, and studied business at the University of California's San Luis Obispo campus. He started working at Intelex in sales basically as a summer job (he spent his first year in Canada living in Brampton, Ont.) in 1999, when the company was in debt and flailing with fewer than five employees.

"Ninety per cent of our business is outside of Canada," he said. "So we see blue sky to become one of the larger software companies in the world."

A tale of two IPOs: Shopify and Mogo face opposite reactions from investors Subscriber content
May 15, 2018 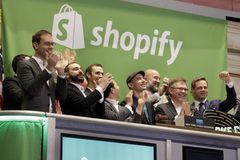 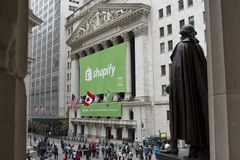