The Vancouver-based telecommunications provider said Thursday it spent $305-million in the last quarter of 2016 on one-time payments to employees in exchange for wage freezes and lower overtime costs, all to free up more flexibility to keep up the pace of its capital expenditure program.

The company has been spending heavily on its landline and wireless networks – upgrading its older infrastructure to faster fibre-optic cable – while Shaw has made an aggressive push to sell more high-speed Internet services and introduced a new premium television product to better compete with Telus's Optik TV.

Telus spent $2.97-billion on capital expenditures in 2016 and plans to invest a further $2.9-billion this year; chief executive officer Darren Entwistle said he hopes that will give it an edge, particularly due to the strength of its wireless network, which is far ahead of Shaw's still-new Freedom Mobile division. He said he's confident Telus's television product has features plus a "road map" to upgraded versions that will compare favourably with Shaw's new BlueSky TV service.

He told analysts Thursday he sees it as "healthy" that the "developing competition is based on product innovation and value for money rather than purely price discounting."

Telus's profit was down sharply in the fourth quarter, falling 67 per cent to $87-million or 14 cents a share, largely due to the $305-million paid to employees through a combination of cash and shares. Salaries across the company's Canadian work force – including both union and management employees – will not increase until 2019.

The company also negotiated a reduction in overtime payments from double time to time and a half, less vacation time and an end to premiums paid for working on Sundays.

"During this period of competitive intensity, the economic downturn in Alberta and the generational investments we've made on fibre, we need all hands on deck," Mr. Entwistle said, noting that overtime work has become "more of a fact of life" amid Telus's push to make its fibre upgrades.

Telus reached a new collective agreement with its largest union – the Telecommunications Workers Union, which covers 10,500 workers – in November and agreements with two separate Quebec unions the following month. The new deals included the one-time payouts.

It has been under some pressure from investors to prove it can continue to make its large-scale investments while still returning cash to shareholders through regular dividend increases and share buybacks. Telus said it is targeting dividend increases in the range of 7 per cent to 10 per cent for 2017.

Telus reported fourth-quarter revenue of $3.3-billion, up 2.7 per cent from the same period a year earlier and roughly in line with analyst estimates.

On an adjusted basis, its profit was 53 cents a share, down 1.9 per cent and missing average analyst projections of 58 cents. Its shares were down 2.3 per cent on Thursday, closing at $43.14.

The company's financial results – including its forecast of 2.5 per cent to 3.5 per cent revenue growth in 2017 – were roughly in line with expectations while it outperformed on subscriber growth, said Desjardins Securities Inc. analyst Maher Yaghi.

On the land line side of its business, revenue was up 1.3 per cent to $1.5-billion and Telus reported solid growth in Internet services, with 24,000 new customers in the quarter, ahead of expectations. That alleviated the concerns of some analysts that Shaw had stolen market share after the Calgary-based company added 17,000 new Internet subscribers in its fiscal first quarter that ended in November.

But Internet and television subscriptions are often tied together and, while Telus met expectations with 16,000 new TV customers in the period, that was a bit lower than expected, said Macquarie Capital Markets analyst Greg MacDonald, "highlighting the competitive pressure from Shaw."

Telus outpaced analyst expectations for new wireless customers in the quarter, but with 87,000 new contract subscribers in the period, it still came in third out of the three national carriers. BCE Inc. and Rogers Communications Inc. added 112,000 and 93,000 new contract customers, respectively, in a quarter that saw more overall subscriber growth than analysts expected.

Telus had wireless revenue of $1.7-billion, up 5.4 per cent from last year, boosted by growth in average revenue per user (ARPU), which increased by 3.9 per cent to $66.24 a month as customer data use continued to grow. It posted another quarter of churn – the rate of customer turnover – well below industry norms at 0.98 per cent.

Three years in, CRTC to review code of conduct for wireless industry
May 17, 2018 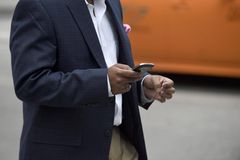