There was no shortage of surprising business news in 2016. From captivating deals to colourful lawsuits, here's some of what set tongues wagging on Bay Street this year.

David Baazov's $4.1-billion (U.S.) proposal to privatize Amaya Inc., announced on Nov. 14, was "unusual" from the get-go. A Globe and Mail investigation raised questions about the financial wherewithal of the four overseas equity sponsors initially named as backers of his bid. The head of KBC Aldini Capital Ltd., one of those firms, told this newspaper he "never even heard of Amaya" and filed complaint letters with U.S. and Canadian regulators over "fraudulent use" of his firm's name. Another backer, Ferdyne Advisory Inc., didn't appear to be a going concern. The Globe further revealed that another investor only had about $59-million under management, as of earlier this year. Then on Dec. 20, Mr. Baazov abruptly announced his bid was dead, noting that "certain shareholders" of Amaya wanted more money than he and his investors were willing to pay.

The first rule of investment banking is don't mess with bonuses. But Canaccord Genuity Group Inc's management did just that. In May, The Globe and Mail reported that certain Canaccord bankers were told that they would not receive their year-end bonuses unless they committed to staying with the firm for a year. One disgruntled banker likened the policy to "being held hostage." After a brief impasse, a truce was worked out whereby bankers were paid a smaller bonus, with the balance to be paid in stock due to vest over a number of years. The stipulation to commit to staying a year was dropped. A number of Canaccord's top bankers left the firm soon after the kerfuffle.

Financier and television personality Michael Wekerle is no stranger to legal spats. In September, the founder and chairman of Difference Capital Financial Inc. sued Porsche AG, Porsche Cars Canada Inc., a Toronto-area luxury car dealership, and two fuel pump manufacturers for $9.4-million (Canadian). The suit came two years after the former star trader's 2015 Porsche 918 Spyder – retail value $1-million – was incinerated in a Caledon, Ont., gas station after a "refueling incident." Mr. Wekerle, who also stars on Dragons' Den, alleged that the fuel nozzle failed to shut off, causing gasoline to spill all over the Porsche. He further alleged that a spark from the sports car then caused a fire. Mr. Wekerle claims he suffered "permanent scarring" and "emotional and behavioural changes." None of the allegations, which are contested by the defendants, have been proven in court.

Bought deals always carry an element of risk for investment banks. Underwriters typically buy shares from an issuer at a discount, but they are under pressure to flip that stock quickly to third-party investors. If a deal is priced too aggressively, investor demand could dry up. Fairfax Financial Holdings Ltd.'s $735-million offering, launched on March, 2 was in trouble almost right away. By the next morning, a syndicate of banks including BMO Nesbitt Burns Inc., CIBC World Markets Inc. and RBC Dominion Securities Inc. was caught holding about half of the offering. A few days later, underwriters blew out the remaining portion at a 6.5 per cent discount. And with that, much of the profits went up in smoke.

It was a deal that few saw coming. In August, GMP Capital announced it was buying FirstEnergy Capital Corp. for $99-million. On paper, the deal made sense. GMP got to reinvigorate its drastically weakened Calgary energy practice, and the folks at FirstEnergy got to cash out. What people will watch over time, though, is how the distinct cultures meld. Investment banking mergers are tough to get right. As veteran Scotia Capital Markets analyst Sumit Malhotra wrote in a note to clients the day after the deal was announced, the math on i-bank mergers tends to be something like "1+1 = 1.5." 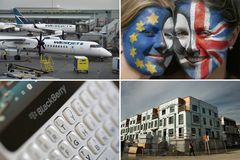