The people of Quebec City and Edmonton are falling prey to one of the oldest con games – the notion that spending public money on pro sports venues is a sound investment.

Facts don't seem to matter in this game. And your city could be fleeced next.

Stacks of independent research over many decades have shown that building a stadium or luring a new franchise does little for a city's economy. They typically don't generate significant new tax dollars, jobs or growth. In most cases, the money would be more wisely spent on badly needed public infrastructure, such as roads, transit or schools.

And yet, governments serially ignore the evidence and continue to shower subsidies on team owners and their media partners.

In Quebec City and Edmonton, governments are currently sinking hundreds of millions of dollars into new arenas. In Quebec City's case, the aim is to attract an NHL franchise. The rationale in Edmonton is to keep its team, the Oilers, from leaving.

Gobs of taxpayer cash will similarly be needed if Montreal Mayor Denis Coderre gets his wish of bringing professional baseball back to the city. The price tag for buying a franchise and building a new baseball stadium – presumably, a domed one – will top $1-billion. And it won't happen unless taxpayers pick up a big chunk of the tab.

So why are governments so gullible?

The simple answer is that sport subsidies are a political winner.

They're sold as investments in the economy. But it's really about civic pride, the thrill of the game and cheering for the home team.

Montrealers, for example, overwhelmingly support the idea of bringing baseball back to their city more than decade after the Expos left for Washington, D.C., according to a recent Abacus Data poll. Nearly 90 per cent of 500 residents surveyed expressed varying levels of support, ranging from lukewarm to strong. Just 12 per cent are against it. Roughly eight out of 10 respondents said Major League Baseball would be good for the economy and generate more taxes for the city.

The reality is quite the opposite, according to numerous independent economic studies conducted over several decades in North America.

"The weight of economic evidence … shows that taxpayers spend a lot of money and ultimately don't get much back," according to a 2001 study, "Should Cities Pay for Sports Facilities?" for the Federal Reserve Bank of St. Louis. "And when this paltry return is compared with other potential uses of the funds, the investment, almost always, seems unwise."

The subsidies rarely stop once the venues are up and running. Billions of dollars a year in hidden subsidies flow to existing sport venues, according to a 2012 book by Judith Grant Long, now an associate professor of sports management at the University of Michigan. In her book, Public-Private Partnerships for Major League Sports Facilities, Ms. Grant Long found that taxpayers are subsidizing 78 per cent of the average professional sports facility in Canada and the U.S.

Earlier this year, U.S. President Barack Obama moved in his budget to close down one financial vehicle that has encouraged subsidies by barring the use of tax-exempt bonds to finance professional sports facilities. In Canada, governments often fund the projects directly from their own coffers, tapping into lower government borrowing costs.

The real story, however, may be that the main beneficiaries of government largesse are team owners.

Quebec City's $400-million Centre Vidéotron was built with a combination of municipal and provincial government money. It's slated to open this fall, a lure for an eventual NHL franchise sought by Videotron owner Quebecor Inc., controlled by Parti Québécois Leader Pierre Karl Péladeau.

The cost of Edmonton's $480-million Rogers Place arena, due to open in time for the 2016-17 NHL season, is being split between the city and wealthy team owner Daryl Katz, who had earlier threatened to move the Oilers to Seattle.

Mr. Katz, who also owns the Rexall pharmacy chain, is now poised to cash in with a massive mixed-used residential, office and entertainment development he's planning for the surrounding area, dubbed "The Ice District." The $2-billion project will include 1,000 residential units, 1.3 million square feet of office space in skyscrapers that will rank among the tallest buildings in Western Canada, a luxury hotel and a public plaza with an outdoor skating rink, casino, restaurants and stores.

The private development wouldn't make much sense without the subsidized Rogers Place as its anchor. And businesses elsewhere will lose as customers inevitably migrate to the new entertainment area, making the deal a wash on the city's tax ledger.

This losing scenario will play out in your city too unless someone stands up and says, enough.

Liberals say talk of provincial stake in a Montreal baseball stadium project is premature
May 29, 2015 Have Your Say: How can global sporting events have positive social impacts?
July 16, 2015 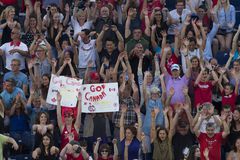