Who will feed us?

That was the question asked on Friday in Rome at a United Nations panel on Big Agriculture as mega-mergers reshape the industry. Even as the panelists were speaking about the potential threats of massive consolidation, Germany's BASF, the world's top chemicals company, announced a deal to pay $7-billion (U.S.) for big chunks of rival Bayer's seeds and herbicide business.

The question was valid because it is "smallholder" farmers who feed the world. Various estimates say that 70 per cent of the world's 7.5-billion people rely on small farms for their daily nutrition. Many farmers are afraid that Big Ag will deprive them of choice in seeds and pesticides, raise prices and use their farming data without paying for it.

Big Ag plays a significant role in the farm-to-fork food chain and is bulking up at an astonishing rate. Earlier this year, Bayer agreed to pay $66-billion (U.S.) for Monsanto, the leading American seeds and agricultural chemicals company (the proposed merger is being probed by the European Union's competition commissioner, Margrethe Vestager). The Bayer-Monsanto deal followed Dow Chemical's $130-billion merger with DuPont and ChemChina's $44-billion takeover of Switzerland's Syngenta, which is Monsanto's nearest equivalent in Europe.

Tally them up, and Big Ag has seen some $240-billion of deal-making in the last couple of years, more than any other industry. The end is not in sight, even though the Big Six will have turned into the Big Three if competition and anti-trust commissioners do not block the latest takeover attempts. The commodity trading companies may be next. Glencore Agriculture, which is half-owned by the British Columbia and Canada pension plans, has approached American grain trading giant Bunge, though no formal buyout attempt has been made. The union of the two companies would create one of the world's largest agricultural trading merchants, especially in wheat and soybeans.

Mergers beget mergers. While the trading companies mull marriages, all eyes are on BASF – market value €82-billion – the one biggie left out of the game of musical chairs. Who might BASF go after?

Here's where things get interesting, and your first hint is this: Big Data.

Agricultural data and how to monetize it is the name of the game in the tech-savvy agribusiness world. The leading companies are in a dash to collect and weave together data from clients and independent sources that ranges from weather patterns and farm yield statistics to soil moisture levels and fertilizer usage.

The data can come from satellite and drone imagery and from "smart" tractors and harvesting equipment that can zap information wirelessly to the manufacturers. Big Ag says the data collection can make farms more productive and efficient by, say, telling farmers what to plant and when, based on soil and weather conditions. Smallholder farmers worry that vast power comes with vast knowledge, and the information being collected (perhaps without their permission) will allow Big Ag companies to put pressure on farmers to, say, buy their own brands of herbicide-tolerant genetically modified plant seeds.

Speaking at the UN's civil society panel on the UN's Committee on World Food Security, Pat Mooney, the Canadian executive director of ETC Group, a global organization that examines the effects of new technologies and industry consolidation on farmers and their local ecosystems, said he has little doubt that "Big Data is the driving force" behind the recent mergers.

John Deere, the world's largest maker of tractors and combines, and one of the largest providers of loans for seeds, pesticides and fertilizer, is a master of using electronic sensors for on-the-ground farm data collection, Mr. Mooney said. As a result, he said, John Deere would be a hugely attractive merger partner.

How about putting BASF and John Deere together? That scenario – an example of vertical integration that would join a chemicals company with an equipment maker – is not out of the question, Mr. Mooney said.

Already, John Deere is figuring out the benefits of collaboration with Big Ag. Two years ago, the company agreed to buy Monsanto's line of high-speed precision planting equipment. The idea was to make it easier for owners of John Deere machinery to connect to Monsanto's Climate Corp. division, which crunches data on crop performance. While the deal was ultimately blocked by the U.S. Department of Justice, it reveals the importance of Big Data to the largest agricultural companies.

Driven by the desire to control Big Data, the agriculture industry may see another merger wave that will concentrate power among fewer companies. Already, more than half of the seed market is controlled by just three companies – Monsanto, DuPont and Syngenta – while Syngenta, BASF and Bayer control at least half of the market for pesticides targeted at genetically modified crops, according to ETC Group. If all the mergers go through, their market dominance will intensify.

Mergers in agribusiness need to be closely examined by competition regulators. A merger in the car industry or among department stores will have virtually no effect on your everyday life. Agriculture mergers that could exert enormous influence on the supply, price, health, and variety of the food on your plate matter a lot. 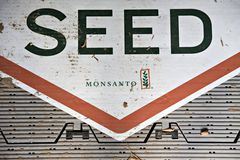