Bonnie Brooks is brimming with pride as she shows off the latest fashions to arrive at the Bay: a $21,000 sequined royal-blue Balmain cocktail dress; a Proenza Schouler school satchel-style purple suede handbag for $3,295.

This is the new face of the Bay, but not all Bay stores are created equally.

Today, Ms. Brooks relaunches The Room, formerly known by the stodgier St. Regis Room moniker, as a vastly expanded space in the downtown Toronto flagship. But it's just part of the CEO's vision to revive the storied but tired department store chain.

She needs more than the high-fashion shopper to fulfill her mission. The majority of her shoppers are "pragmatists" who watch their budgets in these tough times but are ready to spend an average of $1,900 a year on clothing.

And so, Ms. Brooks, who arrived at the Bay just over a year ago, is borrowing a leaf from the book of U.S.-based Bloomingdale's with plans to roll out The Room as a luxury showcase at its key flagship stores - in this case Toronto, Montreal and Vancouver. Like her U.S. department-store counterparts, she will launch three other types of Bay stores with merchandise for "pragmatic" and even more cost-conscious "value" shoppers.

"That's the key to the work we're doing here - you can't paint Canada with one brush," said Ms. Brooks, dressed in fall-chic of an Antonio Berardi outfit (at The Room for $3,490).

"What works in Toronto isn't necessarily going to work in London or in Kitchener ... Before, we didn't have a range of products to differentiate our stores. Now that's changing."

Her task of transforming the Bay is daunting: Its productivity, an important measure in retail measured in sales per square foot, now stands at $165 and lags that of U.S.-based Bloomingdale's and Nordstrom - two of her models which generate close to $400 sales per square foot.

Now she thinks she can almost double the Bay's productivity to $300 per square foot in less than five years. Her blueprint for change includes focusing more than ever on fashion; replacing most of the brands with updated lines; creating different department-store models in different parts of the country; and dramatically scaling back - by half - the number of promotional sales at the stores.

The adjustments will bolster the Bay's $2.5-billion of annual sales by more than 30 per cent over five years, she predicted.

Elizabeth Evans is typical of the kind of customer that Ms. Brooks is trying to woo. Ms. Evans, in her 50s, shops mostly at specialty stores even though her office is close to the Bay and its main rival, Sears Canada. When she does head to the department stores, it's mainly to pick up cosmetics on their main floor.

"The challenge for the Bay is getting customers back into the stores," said Ms. Evans, director of Ryerson University's Ted Rogers School of Retail Management. "It's difficult when you're in the middle part of the market, which is where department stores traditionally have been."

The department stores have been losing business to specialty and discount chains for more than a decade, she said. According to market researcher NPD Group, department stores' sales in the $19.1-billion Canadian apparel industry dropped to 15.6 per cent in the year ended in June, 2009, from 17.6 per cent in 2007.

Ms. Brooks said she is already making headway at the Bay. The average customer purchase rose by $5 to $70 this year from 2008, she said. Sales in the key sections of women's wear, handbags and footwear gained 2 per cent to 5 per cent this fall from a year earlier, she said.

"We still have a lot of work to do," she added.

Part of the work is the $5.3-million refashioning of The Room by star design firm Yabu Pushelbelg: expanding its space by more than five-fold to 21,500 square feet and stocking 70 upscale brands, from about a dozen previously. She has tripled the number of staff to 25 and added a full-time concierge and VIP lounge. In the first year alone, she expects that The Room's sales will triple to $15-million. "It sends a new signal to our customers and to the marketplace."

But beyond adding The Room at two other flagships in the next two years, Ms. Brooks will focus on adding more moderately priced fashion lines to the stores. She has been helped by design houses that, during the recession, launched less expensive lines such as T Tahari by Elie Tahari and BCBGeneration by BCBG.

She has in mind four different types of stores to cater to various markets. They are the three urban flagships which will house The Room; three other flagships in Calgary, Ottawa and Winnipeg; high end suburban stores in such cities as Toronto, Calgary and Vancouver; and older stores.

"What we're building is a hybrid of the major brand dominance that Macy's has ... and the excitement of a Bloomingdale's," she said. 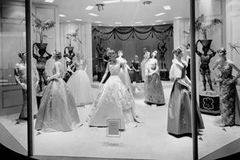