What's in a name? For sports fans, the front row would smell as sweet no matter what you call it, but for sports franchises, the moniker on the marquee of the stadium is a big deal.

The Calgary Flames, for example, are deep in negotiations with the city to build a new arena to replace the aging Scotiabank Saddledome – formerly the Pengrowth Saddledome, formerly simply the Saddledome.

With the price tag for a prospective new facility and surrounding development estimated as high as $1.8-billion, getting good money for naming rights will be an important factor in the deal.

The Edmonton Oilers, meanwhile, have been playing in the $425-million Rogers Place, not to be mistaken for the Vancouver Canucks' Rogers Arena or the Toronto Blue Jays' Rogers Centre, formerly the SkyDome.

The corporate naming of sports and entertainment facilities, ranging from stately pleasure domes to small-town community centres, is a growing business, experts say.

"Naming sponsorships have changed from being a branding component to providing all kinds of leveraging opportunities for companies to sell their goods and services," says Bernie Colterman, managing partner of the Centre of Excellence for Public Sector Marketing in Ottawa.

For example, think of Rogers-named facilities – all three of them – whose names remind viewers of whose networks and on whose cable systems they might be watching the game.

"I guess it's a sign of the times," says Sammy Redlick, corporate lawyer and partner at Torkin Manes LLP in Toronto, who has analyzed a number of naming rights deals.

He explains that as recently as 25 years ago, most major sports facilities had "legacy" names. Usually they were named after the team, such as Maple Leaf Gardens, an area, such as Boston's Fenway Park or a local dignitary, such as New York's now-demolished Shea Stadium.

"What happened since then is that people had to start diversifying their revenue streams," Mr. Redlick says.

Teams couldn't count on selling tickets or hot dogs as steady revenues, especially if their team was bad, and the cost of new facilities kept escalating, so additional pools of money were needed for financing.

"Names began to develop a reputation as a money generator," Mr. Redlick says.

It's almost quaint, now, he notes, that in 1999 Air Canada paid just $30-million for a 20-year deal to name the new home of the Maple Leafs the Air Canada Centre.

In retrospect, this was a great deal – it provided the airline with constant, national visibility, generated additional nicknames (the ACC, the Hangar) and the name gets mentioned every time the Leafs play.

Air Canada will likely want to renew its naming rights when the deal comes up for renegotiation in two years, Mr. Redlick believes. "But it will be competitive," he adds.

The trend in naming rights is for deals now to trickle down to smaller cities and facilities, Mr. Colterman says.

"It's a way for developers, local companies that grew in the community to maintain their presence," he says.

But it doesn't always work.

The Mady Centre for the Performing Arts, in Barrie, Ont., named after a developer who paid up to $500,000, lost its name on Dec. 31 when two of the developer's projects stalled. The rights are now for sale again.

Other names have flopped because, well, they're simply terrible. In Florida, the 1-800-ASK GARY Amphitheater (named after a medical and legal referral service) has changed names several times.

The Houston Astros used to play in Enron Field, until Enron went bust and its chief executive officer went to jail. And even the biggest fans of Colonel Sanders must wince at the KFC Yum! Center in Louisville, Ky. – a name that's arguably finger lickin' bad.

"The dilemma for stadium builders and cities is that once you open naming rights up you have to be available to anyone who's affordable," Mr. Colterman says.

"A $50,000-per-year naming opportunity may seem reasonable in one municipality and too high in another."

The price can vary according to a number of factors, he adds. These include:

– Whether it's a new building or a name change.

– The local competition for naming – is it the only site or are a bunch of names up for grabs?

– Programming – is it year-round with different types of attractions.

– Potential for local media coverage and additional sales of the company's product or service.

The quality of the name also has some bearing. If you don't believe this … just ASK GARY.

Naming rights about more than handing over a big cheque
March 10, 2017 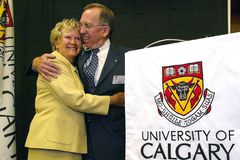 Canada’s top charities for high-net-worth donors
May 15, 2017
Real estate bubble? The wealthy see it differently
March 17, 2017
Follow us on Twitter @globebusiness Opens in a new window
Report an error Editorial code of conduct
Due to technical reasons, we have temporarily removed commenting from our articles. We hope to have this fixed soon. Thank you for your patience. If you are looking to give feedback on our new site, please send it along to feedback@globeandmail.com. If you want to write a letter to the editor, please forward to letters@globeandmail.com.
Comments