Thomson Reuters Corp. is undertaking a major expansion to its Canadian operation with a plan to build a technology hub that will add 400 high-tech jobs in downtown Toronto over the next two years.

The blueprints for the news and information giant's new Toronto Technology Centre, to be unveiled Friday, will increase its Canadian head count by a third in the short term. The company expects to add 1,500 jobs in the longer term, mostly by hiring from the local market.

Executives at Thomson Reuters, which has deep roots in Toronto dating back to 1934, were drawn to the city as a key access point to talent in the technology sector, at one end of a corridor that stretches to Waterloo, Ont. The company has developers in 43 countries, but only five large hubs, stretching from Bangalore to Dallas. Toronto will be its sixth, and the city's young, diverse work force was a major selling point, pitched by politicians who are keen to sell Canada as a place where global companies can set up shop.

"We can't create enough innovation inside our company alone in order to survive. So we need those labs, we need a network and ecosystem of outside developers," Jim Smith, chief executive officer of Thomson Reuters, said in an interview. "Frankly, the multicultural aspect of Toronto is attractive to us. It's an environment that looks like our client base around the world."

The company expects to start hiring within weeks, and as a signal of its renewed corporate presence in Canada, Mr. Smith and chief financial officer Stephane Bello will both move to Toronto next year.

Thomson Reuters is already incorporated in Ontario, but most of its top executives live near the company's office in Stamford, Conn., in New York or in Europe. Several years ago, it became clear that the company's connection to Canada had waned, but Mr. Smith made plain his desire to "push back into Canada."

The infusion of new jobs is also the result of a concerted diplomatic effort by all levels of government. In an interview, Prime Minister Justin Trudeau described the announcement as "a good day that's been a long time coming."

"This is a big proof point around what we're focused on doing," he said.

Mr. Trudeau first met Mr. Smith at the World Economic Forum in Davos, Switzerland, where the Prime Minister and International Trade Minister Chrystia Freeland tried to pitch Canada as a country worth investing in. The two men met again in New York for a more granular discussion and hit it off.

"Jim surprised me with having a high level of sensitivity and nostalgia about the fact that Thomson Reuters is a Canadian company," Mr. Trudeau said.

The next step was ironing out the friction points. The Canadian government offered no financial incentives, but provided assurances that red tape issues, such as immigration paperwork, would be handled smoothly, tapping "the right bureaucrats to lean in on the file," Mr. Trudeau said, although he added: "We weren't making big exceptions for Thomson Reuters, either."

"It's not about incentives, but it is about concierge service," Ms. Freeland said, adding: "This is a lot of jobs coming to Canada."

Ontario's government has also worked on giving companies an easy "entry point," Premier Kathleen Wynne said in an interview. But the province's primary role is nurturing the talent pool that companies such as Thomson Reuters hope to tap, starting with colleges, universities and startup incubators.

"Having that critical mass of talent, we know, is what is going to bring businesses here," Ms. Wynne said. "So we have to continue to pay attention to people like Jim and the needs he's going to have so that we work with our educational institutions."

Thomson Reuters is keen to build bridges with tech startups, but a company of its size can't do it all with "one-off relationships," Mr. Smith said. Three early stage incubators – Ryerson University's Digital Media Zone and the MaRS Discovery District in Toronto, and Communitech in Waterloo – offer a way to plug into the energy of emerging talent.

"What we asked for was just access and introductions to the right people so that we would have access to talent," Mr. Smith said.

Over the past year, Thomson Reuters has moved more senior staff into Canada, where the company currently has 1,200 workers, before the new Toronto investment. The goal was to make better connections with major Canadian clients and to find opportunities to land government clients.

A year ago, Thomson Reuters launched an innovation lab at Communitech, seeking to create a pipeline of collaborative ventures. And late last month, Thomson Reuters announced a five-year, $20-million partnership with the University of Waterloo to create a research chair in data cleaning, provide nearly 700 of its Eikon desktops, and create co-op and internship in its Waterloo lab.

The Toronto Technology Centre will initially be housed in Bremner Tower, east of the CN Tower, and will focus on areas such as cognitive computing, visualization and cloud development.

"They'll be development jobs, software engineers designing and building products," Mr. Smith said. "This will be where we build stuff." 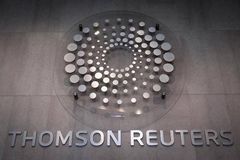