How much is a porcelain mug worth to Tim Hortons?

The coffee-and-doughnut chain is putting the matter to a test.

Tim Hortons, which was acquired late last year by the cost-cutting-obsessed 3G Capital Partners LP of Brazil, has been quietly piloting the removal of china cups and plates from a smattering of its cafes, offering only disposable alternatives. It has posted notices in test restaurants to thank "valued guests" for "joining our efforts to reduce water usage and improve our recycling program."

The test probably is part of the 3G efficiency model, suggested Douglas Fisher, president of food-service consultancy FHG International. "Anything that is a cost saving is something they're willing to do," he said.

And the move goes against the grain of a growing array of "fast casual" restaurant chains that are using chinaware to serve what is touted as better quality food in a higher-end fast-food milieu, said Robert Carter, executive director of market researcher NPD Group.

Restaurants are using porcelain plates partly to draw customers at supper time when business is suffering, he said. Supper traffic in eateries in Canada fell 2 per cent in the year ended Sept. 30, outpacing the 1-per-cent drop in overall traffic to restaurants, NPD data show.

Michelle Robichaud, spokeswoman for Tim Hortons whose new parent is Restaurant Brands International Inc., confirmed the pilot but said it is only at a "small handful of locations" including in the Kitchener-Waterloo area.

The pilot is primarily at "non-traditional" sites where in-restaurant dining is less common, she said. (Non-traditional locations include universities and hospitals.)

"I also want to emphasize that we are not considering removal of china chain-wide," she said in an e-mail. "In fact our guests have told us that they appreciate the fact that they are able to use china when they do dine-in with us, that it differentiates the Tim Hortons experience."

Restaurant Brands has been racing to slash costs at the company, which was formed by merging 3G's Burger King chain with Tim Hortons of Oakville, Ont. In its third quarter, Restaurant Brands sliced selling, general and administrative expenses to $18.5-million (U.S.) from $43.1-million a year earlier while generating a better-than-expected profit.

In the United States, fast-food and fast-casual restaurants, such as Chipotle Mexican Grill Inc., tend to use disposable dishes, partly because a growing number of orders is take-out fare, said Joe Pawlak, managing principal at foodservices consultancy Technomic in Chicago.

But recycling the cups can be tricky, especially because plastic linings and lids have to be separated from the paper garbage, he said. And he wasn't sure that disposables are cheaper in the long run than their porcelain counterparts.

Restaurant chains such as Starbucks Canada and Tim Hortons have come under scrutiny by critics for offering recyclable cups but allowing customers to toss them in the regular garbage.

Some customers haven't been pleased with Tim Hortons' trial. Charles Stuart was dismayed a week ago when he tried to order a mug of coffee at a Tim Hortons in Kitchener and was told that china ware had been discontinued.

He watched as many patrons pitched their finished paper cups in the waste rather than the paper garbage bin, pointing out the environmental risk. "I'm taking my business exclusively to the funky independent café with the mismatched reusable cups a couple of blocks away," said Mr. Stuart, a Kitchener resident.

Ms. Robichaud referred to the chain's sustainability report, including that hot beverage cups are made with paper fibres that are sourced from "responsibly managed forests" and milled using "an elemental chlorine-free process." It says the cups are printed with water-based inks and have no added heavy metals. 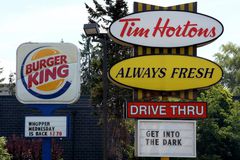 Opinion
A popular brand like Tims undermines trust at its peril
August 17, 2015 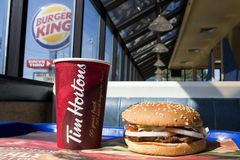 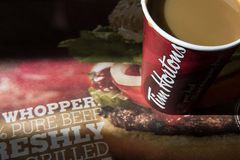