Chart of the day: Bupkis 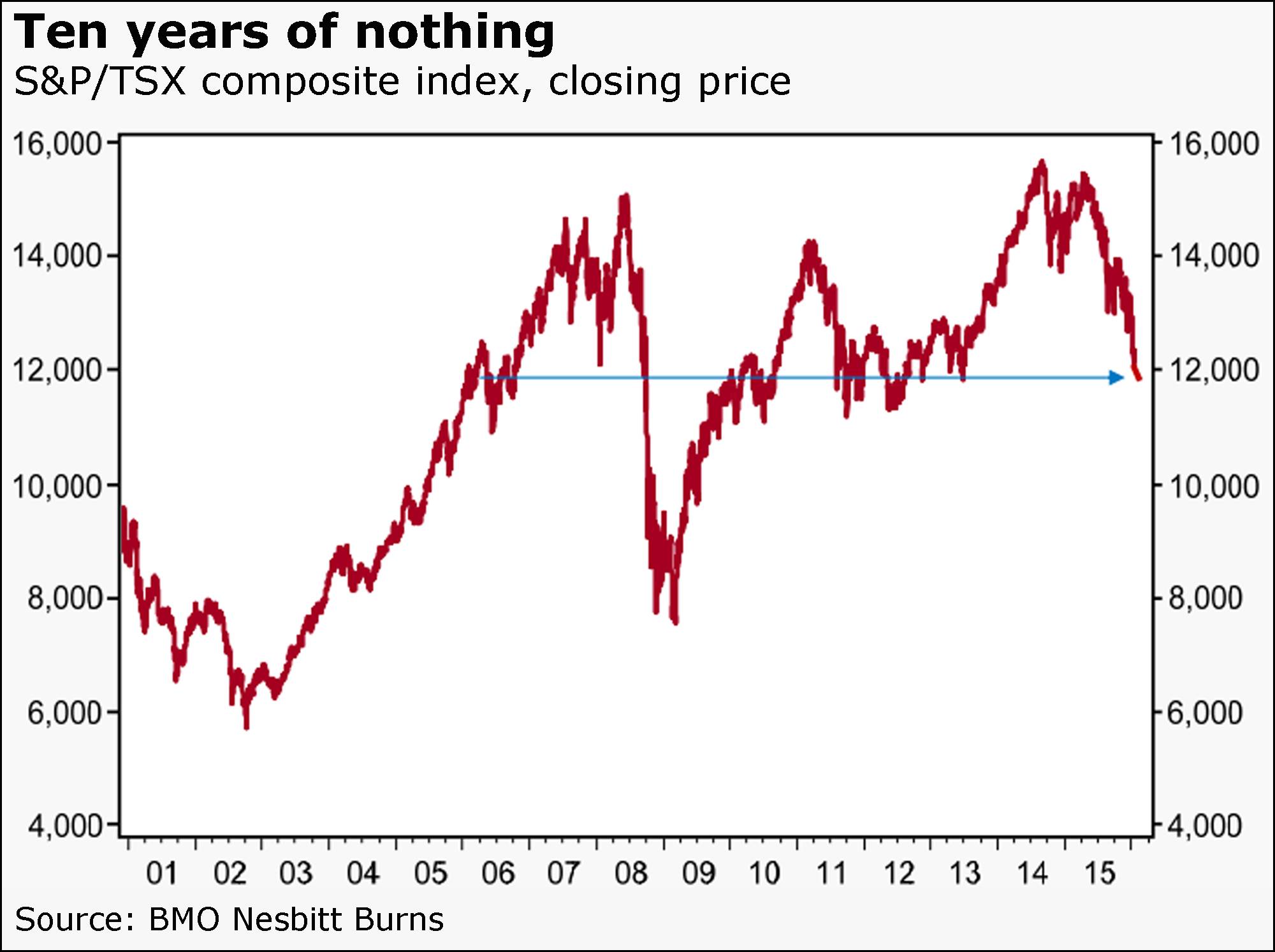 “That said, when dividends are brought into the mix, the 10-year annualized total return on Canadian stocks is still running around 4 per cent,” he added.

“But, that is among the weakest such periods of the past 50 years, and it has been outperformed slightly by short-term bonds.”

Over the same period, Mr. Kavcic noted, the S&P 500 shows a total return of almost 8 per cent, which would be 9 per cent on a Canadian-dollar basis.

“Talk about paying to be diversified.”

Stocks are climbing across the globe so far today, however, with China’s weaker economic reading raising the hopes of stimulus from Beijing.

And, at least one analyst said, today’s numbers from China its softer growth prospects may not really be the issue.

Beijing released several data points, among them figures on gross domestic product that showed year-over-year economic growth of 6.9 per cent.

“This morning’s data confirm that it’s not really the Chinese economy that has sent the FTSE 100 to its lowest close in three years,” said CMC Markets analyst Jasper Lawler, referring to the hit that the London market has been taking.

“At the heart of it, earnings appear to have topped out, central banks are either at maximum quantitative easing or winding it back, so China is the excuse for a timely pullback in equity benchmarks with overstretched [price-earnings] ratios.”

Scenes from the Suncor-COS bargaining table

Potash Corp. of Saskatchewan is shutting down a New Brunswick operation, throwing up to 430 employees out of work, in a move it says will boost its competitiveness.

The indefinite suspension of the Picadilly operation will also cut costs by up to $50-million this year, though severance and other issues will eat into that.

“The Picadilly mine will be placed in care-and-maintenance mode at an estimated annual cost of $20-million in 2016 and $15-million in subsequent years,” the company said.

“Should the company decide to resume operations at Picadilly, it would require a period of about one year.”

The International Monetary Fund isn’t changing its already weak outlook for Canada’s economy this year, but it is taking a dimmer view of 2017.

In an economic outlook released today, the IMF still sees economic growth this year of 1.7 per cent. But the group shaved its 2017 projection to just 2.1 per cent from an earlier forecast of 2.4 per cent.

Another interest rate cut from the Bank of Canada this week could fan the flames in some already frothy housing markets, economists warn.

It’s not a sure thing that the central bank will trim its benchmark rate from 0.5 per cent on Wednesday, but many market players are betting on it.

And it’s not just the obvious, that even lower rates would spur home sales, but also the impact a rate cut could have on an already troubled Canadian dollar.

Foreign buyers of Canadian real estate already enjoy a hefty discount, which could be even higher should the loonie tumble further in the wake of a rate cut.

“While we have tended to downplay fears about record household debt ratios, we are concerned that the soaring Vancouver and Toronto housing markets have moved into risky terrain,” BMO Nesbitt Burns chief economist Douglas Porter and senior economist Benjamin Reitzes said in a report.

“Another rate cut could fan a market with one hand that policy makers are trying to slowly tamp down with the other,” they added, referring to Finance Minister Bill Morneau’s recent measures.

Of course, they noted, one could also argue that those measures mean “Ottawa has already taken steps to ensure that the housing market doesn’t respond with exuberance to any further rate relief.”

The BMO economists weren’t saying that the central bank should cut rates for a third time – indeed, they “remain skeptical” – but they do expect it will.

They’re not alone. Several other economists also believe Bank of Canada Governor Stephen Poloz and his colleagues will act amid the worsening oil rout, rather than wait to see what the federal government offers in terms of stimulus.

But some housing markets, notably those of Vancouver and Toronto, have long been the source of bubble worry, although economists don’t believe they will crash.

Then there’s an issue already sparking much debate, that of foreign money in Canadian real estate.

“That’s good in terms of support for housing and for those who already own homes,” he said.

“But the concern is that by cutting, we build higher peaks in housing markets that on average are already very inflated – and then have more limited policy flexibility down the road should we come off such peaks.”