Whither the oil patch

Red flags are being thrown up across Alberta.

Already, unemployment has spiked and the housing market has tanked. Prospects for the latter have actually grown bleaker, with fears that Calgary and Edmonton could become collateral damage in Ottawa’s attempts to hold down property values in Vancouver and Toronto.

And now, the Bank of Canada is warning that there are uncomfortably high numbers of Albertans juggling oversized debts.

Which is exactly what’s playing out in the home of Canada’s oil industry.

In its review of the financial system this week, the Bank of Canada took a deep look at highly indebted families in the country, finding they were concentrated in British Columbia, Alberta and Ontario.

Indeed, Alberta saw the biggest jump among the provinces in that highly-indebted category in 2012-14 compared to 2005-07, to almost 11 per cent of families with debts, from just about 4 per cent.

And to put that in perspective, highly indebted means a debt-to-income ratio above 350 per cent.

British Columbia topped the list, at 13.6 per cent, and Ontario was third at 8.5 per cent. But those are the two provinces expected to lead the country in economic growth.

Alberta’s economy, in contrast, is expected to have contracted by about 1.5 per cent this year, with slow growth forecast for 2016.

“The situation remains fluid, however, as the recovery in growth conditions in 2016 and into 2017 is premised on a modest strengthening in crude oil prices, in the absence of which the anemic economic environment could persist,” Royal Bank of Canada economist Laura Cooper said in a recent economic forecast.

One need only look to the labour market, where unemployment has jumped sharply to 7 per cent and, according to new data from Statistics Canada today, the number of recipients of jobless benefits more than doubled in October from a year earlier.

The housing market has taken it on the chin, too.

Home sales in Calgary fell about 28 per cent this year through November, and average prices 2.9 per cent. In November alone, prices were down more than 5 per cent from a year earlier, the Calgary Real Estate Board says.

In Edmonton, prices are up 1.5 per cent so far this year, but down 3.1 per cent in November alone from a year earlier, according to the local real estate board.

Those markets are also now threatened by new rules aimed at cooling down Vancouver and Toronto. As The Globe and Mail’s Tamsin McMahon reports, Ottawa is raising the minimum down payment to 10 per cent from 5 per cent on new government-insured mortgages for the portion of a property’s value between $500,000 and $1-million.

“These price categories represent fairly big chunks of activity in both markets,” RBC senior economist Robert Hogue said in a report on the changes, referring to Toronto and Vancouver.

“Unfortunately, these price categories also represent a substantial share of Calgary’s market,” he added. “... While the rule change is unlikely to be a shock that would derail housing activity over all, it might have more significant adverse consequences in Calgary. We will continue to monitor the situation very closely in this market for signs of significant weakness.” 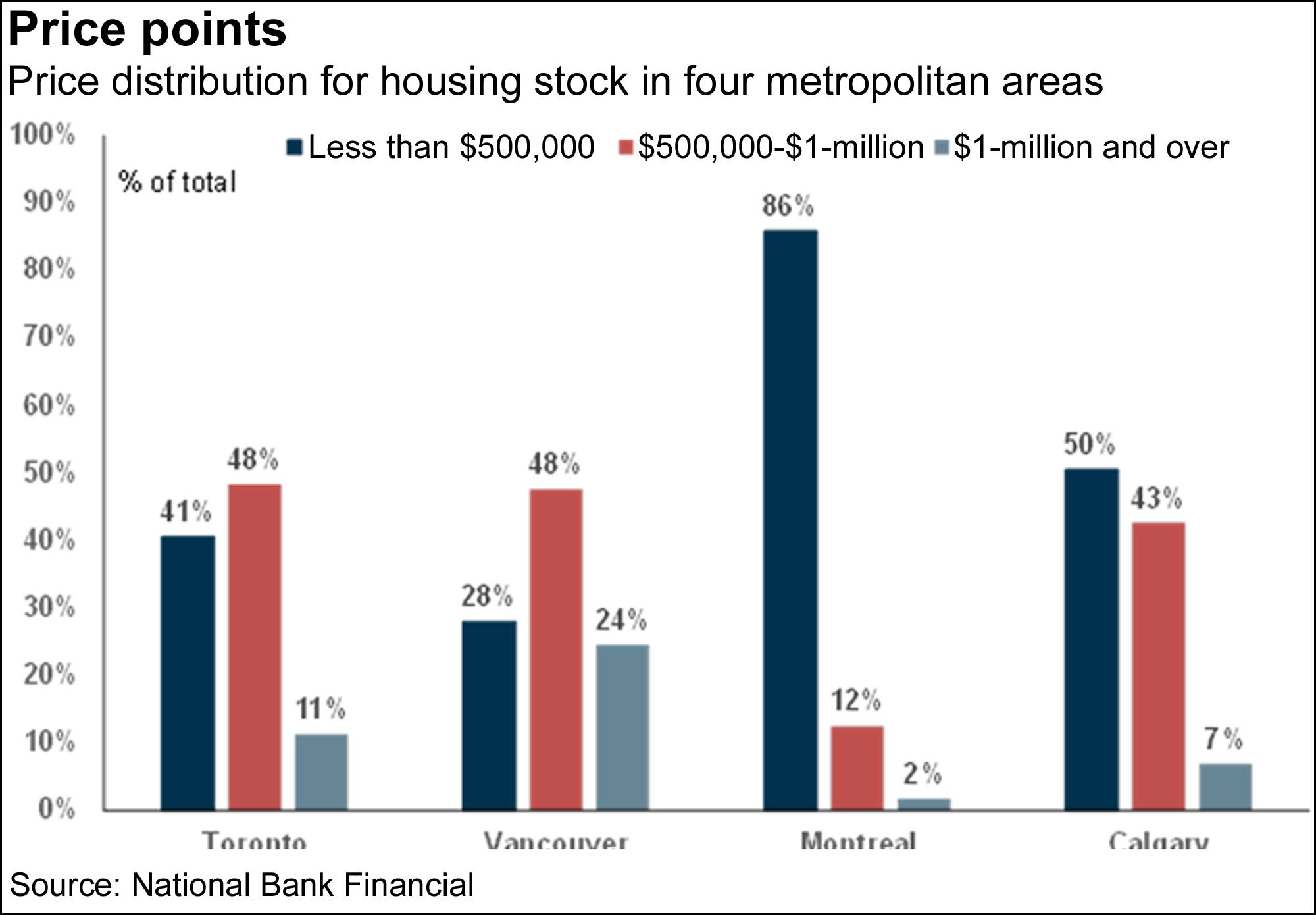 The Realtors Association of Edmonton and the Canadian Real Estate Association also cited the threat.

“With oil prices slumping to lower levels, the economic fallout in Calgary and Edmonton has likely only just begun,” said David Madani of Capital Economics.

A plunge in sales and surge in listings, Mr. Madani said, typically signals falling prices, although with a delay of several months.

Active listings in Calgary are up almost 34 per cent this year. Listings in Edmonton were up almost 55 per cent by the end of November from a year earlier.

“During the initial months, prospective sellers refuse to drop their asking prices and prospective buyers don’t raise their offers,” he said.

“This standoff leads to a sharp drop in sales but without the big price declines. As time passes and weak sales persist, prospective sellers realize that the market has softened permanently and eventually accept lower price offers.”

BMO Nesbitt Burns senior economist attempted to answer that with what he called a “very crude” example based based on $100,00 in gross income and a mortgage of $350,000 at 3 per cent.

“Note that the debt service ratio is less than 30 per cent - well within what is considered manageable,” Mr. Kavic said.

The second half of his graphic shows a rising share of payments being used for principle, which means “Canadians, despite all of their wrong doings, are building equity must faster than in the past.”

Video: What's the impact of Fed rate hike on Canada?