If you needed more evidence of where the action is, the latest reading of Canadian home prices spells it out.

Values rose in Vancouver by 0.6 per cent in October from September, and in Toronto by 0.3 per cent, according to the Teranet-National Bank home price index released today.

But it’s the year-over-year figures that are eye-popping: 9.8 per cent in Vancouver and 9.3 per cent in Toronto and nearby Hamilton.

Those are the three cities that have seen prices surge repeatedly, and in the case of Vancouver and Toronto have led to warnings about the froth in the markets. 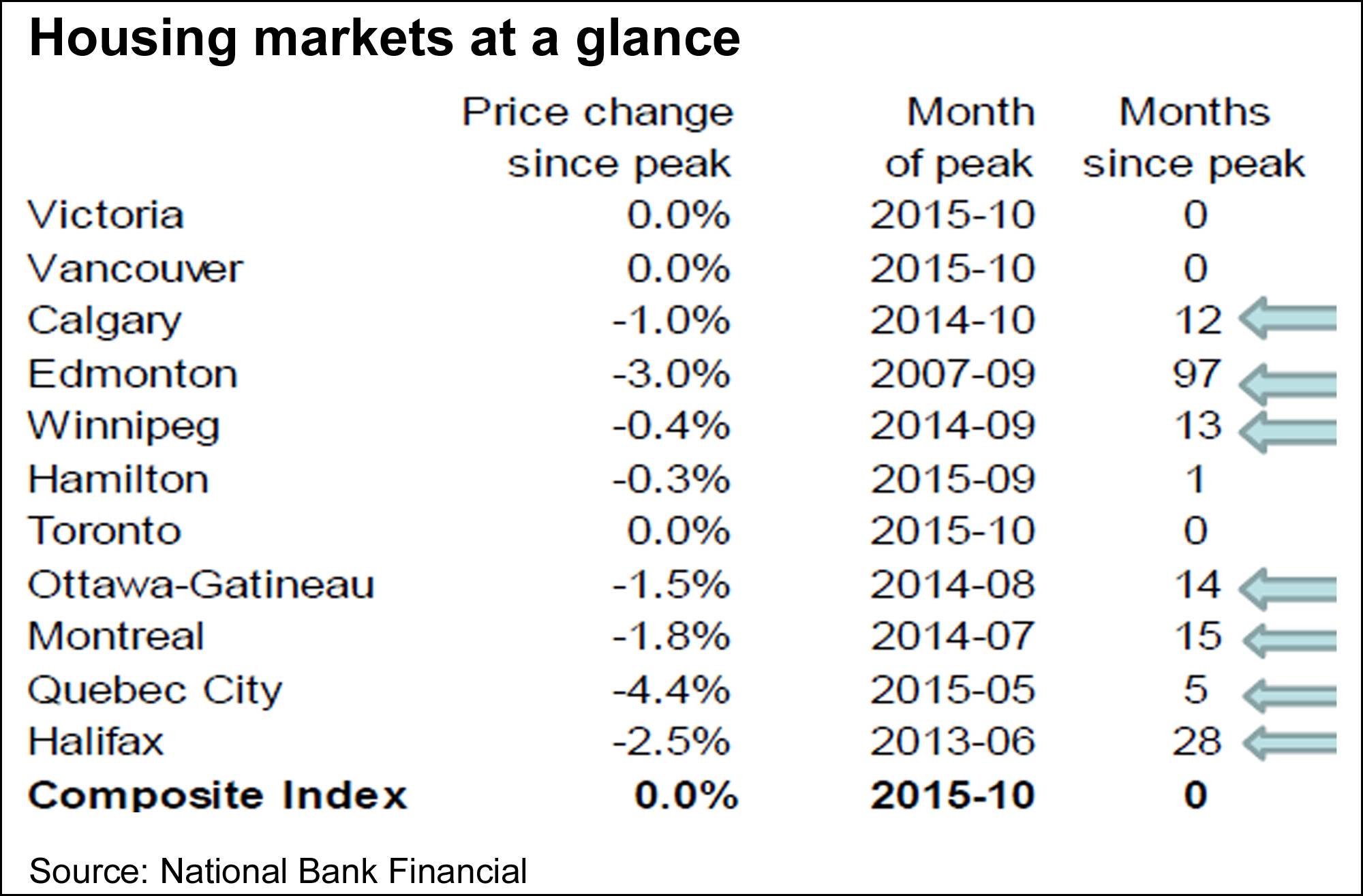 “The regional dichotomy in the Canadian housing market is more obvious than ever,” said National Bank senior economist Marc Pinsonneault.

“The 12-month composite price increase, the largest since May 2012 ... was driven by only four markets (Toronto, Hamilton, Vancouver and Victoria) where home resale market conditions are known to be rather tight.”

Across Canada, prices rose 0.1 per cent from September, marking the 10th consecutive month of gains. On a yearly basis, prices climbed 5.6 per cent.

The Calgary market, which has been hit by the oil shock, saw an annual decline of 1 per cent, though a monthly rise of 1.7 per cent.

When you strip out the really hot markets, average gains in other areas were flat, said Mr. Pinsonneault and his National Bank colleague Krishen Rangasamy, calling October’s showing the worst diffusion in six years” in Canada.

“The number of metropolitan areas seeing rising home prices in October was the lowest in six years,” they said in a research note.

“The widely anticipated moderation in Canadian real estate seems to have arrived.”

There’s more evidence today of how the oil shock is hurting and spreading.

You can see it in the quarterly earnings reports from two major Canadian companies, Encana and Manulife.

Encana posted a third-quarter loss of $1.2-billion, or $1.47 a share, hampered by an impairment of $1.1-billion, but chief executive officer Doug Suttles said in a statement that “we are capturing the benefits of an increasingly focused portfolio and disciplined capital program, as well as significant reductions in our cost structures, debt and interest expense.”

Manulife, in turn, posted a dip in third-quarter profit that was driven down by its oil and gas investments.

Manulife took a charge of $200-million related largely to its oil gas investments.

Barrick Gold Corp. has sold several of its non-core Nevada mines for $720-mlliion (U.S.) in cash, putting it on track to meet its ambitious target for reducing its mountain of debt, The Globe and Mail’s Ian McGugan reports.

Authorities have been poking into the Facebook accounts of hundreds of Canadians.

In its latest report on government requests, the social network said this week that the total requests made by authorities in Canada numbered 410 in the first six months of the year.

Information was handed over in almost 79 per cent of the cases.

“Over all, we continue to see an increase in content restrictions and government requests for data globally,” Facebook said, noting that requests around the world climbed 18 per cent to 41,214 in the six-month period from a year earlier.

Content “restricted for violating local law” also rose, by 112 per cent from the last half of 2014,.

“As we have emphasized before, Facebook does not provide any government with ‘back doors’ or direct access to people’s data,” it added.

“We scrutinize each request we receive for legal sufficiency, whether from an authority in the U.S., Europe or elsewhere. If a request appears to be deficient or overly broad, we push back hard and will fight in court, if necessary.”

I ran across a nifty online calculator that tells you where you rank in the grand scheme of things (and played around with it until it told me I was richer than I thought.)

Jokes aside, it’s actually a useful tool because it underscores the extreme income inequality in the world today. It also highlights the relative wealth of Canadians.

And if you try it out, you just might be surprised.

The income calculator is on the Pew Research Center website. I ran across it in a World Economic Forum post this week that looked at the Pew data and determined that “if you live in the West, you are more than likely part of the middle-income bracket or higher by global standards.”

The Pew calculator looks at daily income for each person in a household as of 2014, adjusts it for inflation and then converts it based on purchasing power parity. The answer you get estimates where you stood in 2011 in your country and worldwide.

Fifty-six per cent of people on the planet are deemed to be low income, and 15 per cent poor. Just 9 per cent are in the upper-middle-class bracket and 7 per cent are high income.

(I played around with it by reducing the number of kids I have, kicking one or two out of the house in an attempt to make the daily income higher.)

Graphic of the day

Alberta was a high flier last year, leading Canada’s provinces in economic growth. This year and next, not so much.

As the latest forecasts from BMO Nesbitt Burns show, British Columbia will be the hot spot, followed by Ontario. 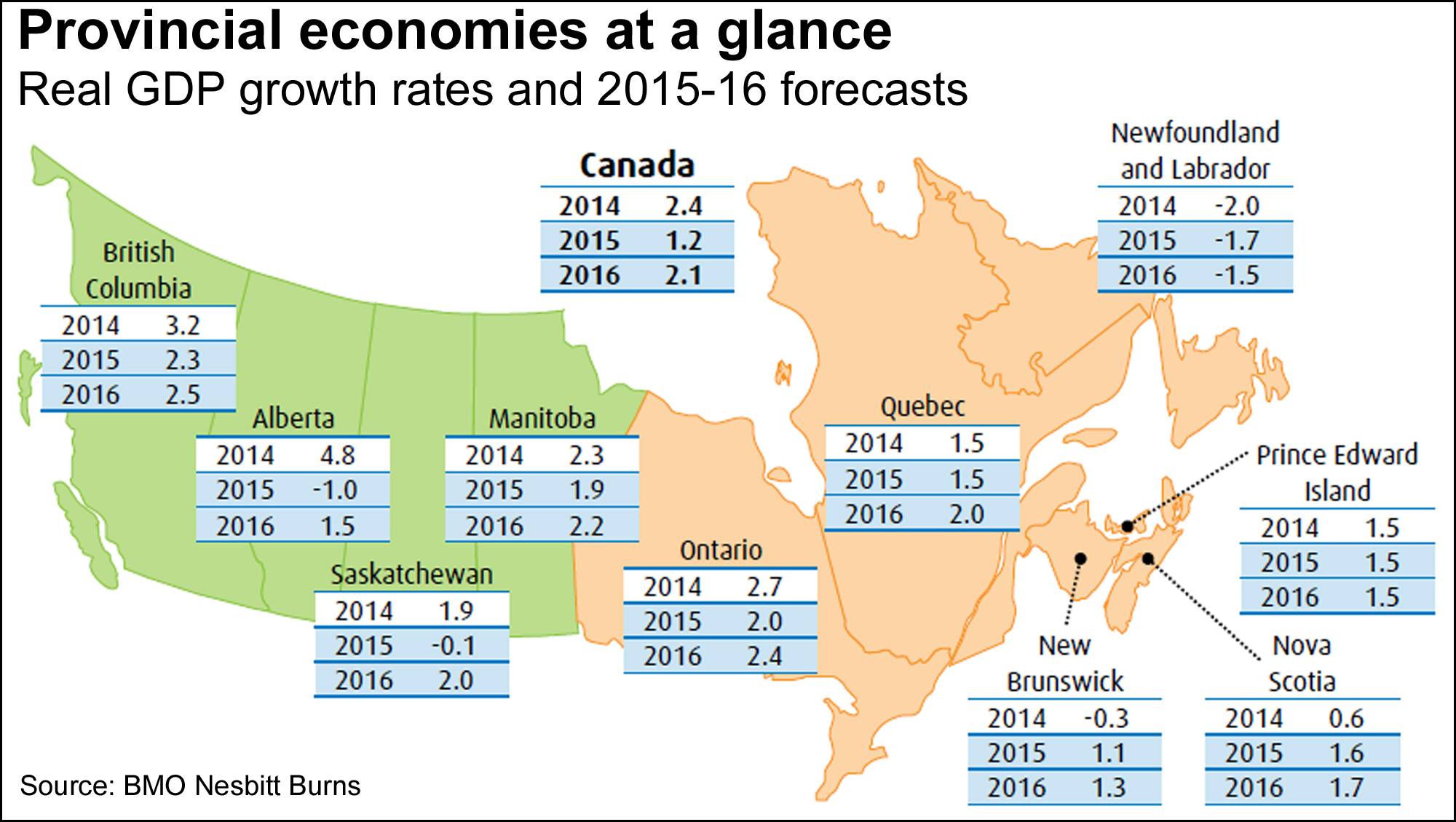 “While growth is expected to continue through 2016, the regional landscape has been dramatically reshaped, with previously high-flying oil-producing provinces slowing while some past laggards take on a leadership role,” said BMO senior economist Robert Kavcic.

Video: Knowing when it's time to just shut up