The Canadian dollar tumbled again today, hit by the market fallout from the Brexit referendum.

“That’s kryptonite for the Canadian dollar,” Mr. Osborne said, though he noted that the loonie is holding up better than some other currencies.

Like other observers, Mr. Osborne expects the currency to sink further, possibly to about 74 cents (U.S.) in the next three months amid the turmoil.

Having said that, the forecast isn’t all that much different from his pre-Brexit projection.

“Markets don’t like uncertainty,” Mr. Osborne said, noting the obvious uncertainty after Britain voted to quite the European Union, a move that sent markets into a tailspin Friday and has led to fresh concerns today.

Senior market analyst Ipek Ozkardeskaya of London Capital Group believes the loonie could settle at the 75-76-cent level “given that once the panic is over, investors will be chasing opportunities to enter the market at dips.”

Which means there could be an “opportunity” for the Canadian dollar.

“First, the Brexit decision will have a minor impact, if any, on Canada's trade relations with the U.K.,” Ms. Ozkardeskaya said, adding it may be even better than it looks down the road should Britain attempt to tighten trade ties with North America.

Not only that, the suggestion that the Federal Reserve may push back its timeline for raising interest rates could narrow the “policy divergence” between the U.S. central bank and the Bank of Canada.

“This is positive for the loonie,” she said.

Britain’s pound was also whacked again, as were stocks in European and North America.

“The selling pressures continued with the weekly opening bell as the political atmosphere has turned sour after a weekend of discomfort across the United Kingdom,” Ms. Ozkardeskaya said.

The S&P 500, Dow Jones industrial average and the S&P/TSX composite were also all down by late afternoon.

“What we really need is some form of decisive action, as financial markets seek reassurance that things will be okay,” IG market analyst Joshua Mahony said of the events in Britain.

“What we look likely to get is two months of political infighting, followed by another 20 months of uncertainty as the new leader somehow attempts to secure a deal which appeals to the many facets of the Leave campaign,” he added.

“This will all take time and, in the meanwhile, investors and businesses are left to ponder what the potential impact will be of this monumental decision.” 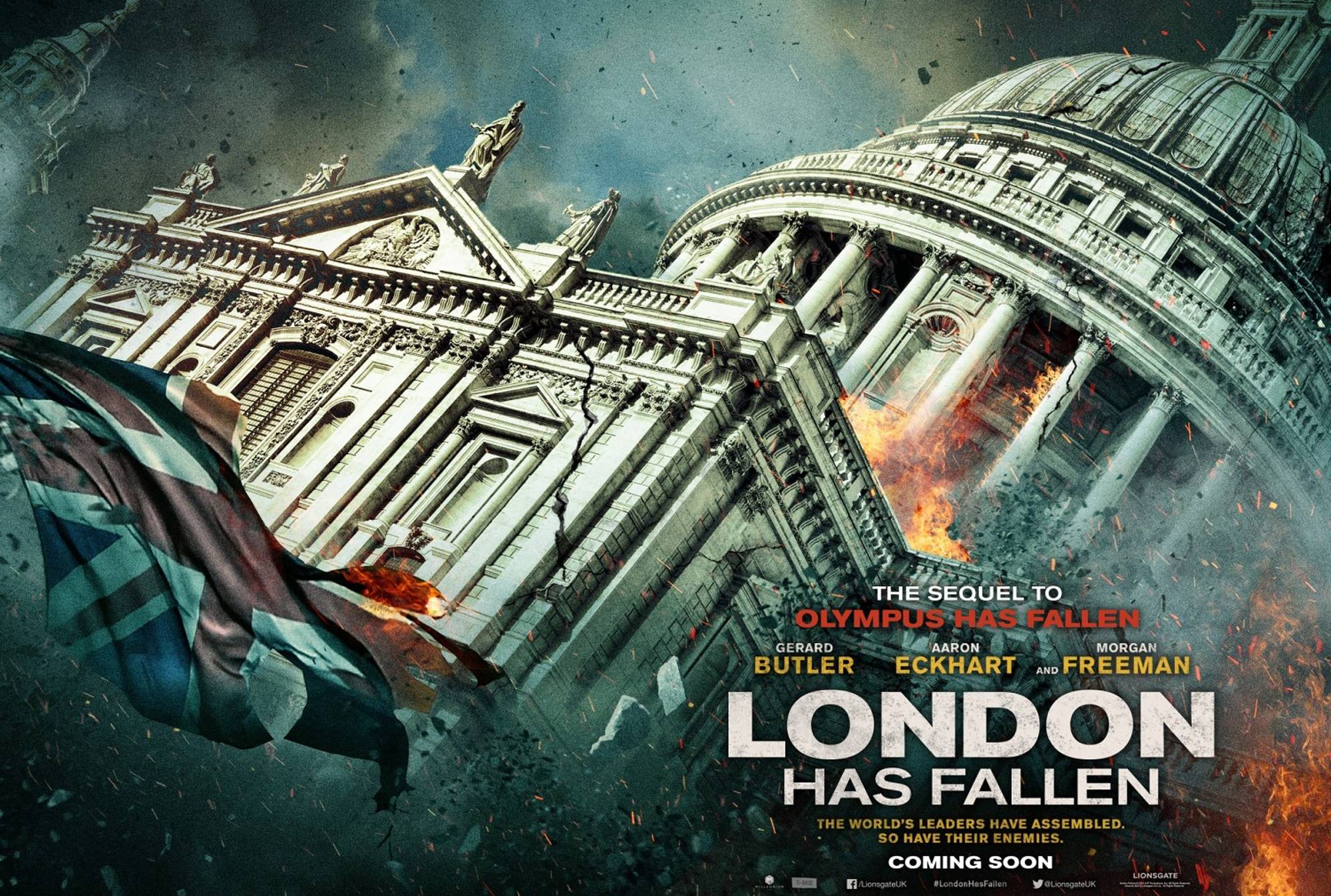 Standard & Poor’s has cut the U.K.s credit rating to double-A from triple-A in the wake of the Brexit vote.

The decision to leave the European Union is a “seminal event, and will lead to a less predictable, stable, and effective policy framework in the U.K., the credit rating agency warned today.

“We have reassessed our view of the U.K.’s institutional assessment and now no longer consider it a strength in our assessment of the rating,” the group said.

“The vote for Remain in Scotland and Northern Ireland also creates wider constitutional issues for the country as a whole.”

The Canadian dollar tumbled again today, hit by the market fallout from the Brexit referendum.

“That’s kryptonite for the Canadian dollar,” Mr. Osborne said, though he noted that the loonie is holding up better than some other currencies.

Like other observers, Mr. Osborne expects the currency to sink further, possibly to about 74 cents (U.S.) in the next three months amid the turmoil.

Having said that, the forecast isn’t all that much different from his pre-Brexit projection.

“Markets don’t like uncertainty,” Mr. Osborne said, noting the obvious uncertainty after Britain voted to quite the European Union, a move that sent markets into a tailspin Friday and has led to fresh concerns today.

Britain’s Chancellor of the Exchequer acknowledged today that the country’s economy will be impacted by the decision to pull out of the European Union, but indicated he will remain in place to help mitigate the fallout.

“Britain is ready to confront what the futures holds for us from a position of strength,” George Osborne said.

Mr. Osborne’s comments came as the British pound fell about 2 per cent against the U.S. dollar and investors braced for more market turmoil, The Globe and Mail’s Paul Waldie reports.

Economists, stock analysts and currency strategists are fast changing their view of the world as we head into yet another round of market uncertainty in the wake of the Brexit vote.

Britain’s decision to quit the European Union will ripple through Canada in several ways, though what we’re seeing now is the immediate aftermath, with much still in play.

“It is still early days, but should financial conditions deteriorate, the economic outlook for the global economy, and Canada in turn, are at risk for a downgrade,” she added.

“A deterioration in stock market wealth and greater economic uncertainty are generally negative for economic growth.”

Here’s how it could play out:

The impact could come through trade and turmoil, in terms of confidence.

While trade with Britain is small, as an overall share, it could still be felt. So a weaker appetite in Britain could hit us in terms of reduced demand for Canadian exports.

There’s also the issue of a further hit to commodity prices on which so much of Canada depends.

Bank of America now expects a mild U.K. recession that could trim imports to Britain by 5 per cent, in turn trimming economic growth in Canada by 0.06 per cent.

“This ’uncertainty’ drag is harder to measure, and will likely be larger than the direct trade drag,” she said in trimming her forecast for economic growth in Canada next year by 0.2 of a percentage point to 1.7 per cent.

Then there are investments back and forth.

“Based on our model simulations, we estimate that confidence and financial spillovers from a Leave result could shave about 0.5 to 1 percentage point off GDP growth for the U.S. and Canada in the second half of 2016, driven mainly by an expected reduction in business investment growth as a result of a rise in global economic uncertainty,” the TD economists said in a report.

“The negative impact on real GDP growth for Canada would be amplified if [last week’s] events foreshadow a prolonged slump in commodity price growth and any further drag from slower foreign demand.”

Yes, Friday was bad in the aftermath of the vote. And investors are bailing out again today.

But remember that stocks had run up earlier last week in anticipation of a Remain victory.

“Looking back to the 2011-12 European crisis, North American equities were struck by some volatility, but at the end of the day ran according to their own domestic script,” Mr. Kavcic said in a report titled “Brexit wounds,” citing some differences between then and now.

“All told, North American equities may hold up just fine, but there’s less wiggle room to deal with shocks at this stage of the cycle.”

Canadian banks aren’t all that exposed, he said, but will still probably be hit for two reasons.

“2. Fears over financial contagion and potentially further exits from the euro zone could take hold for a time.” 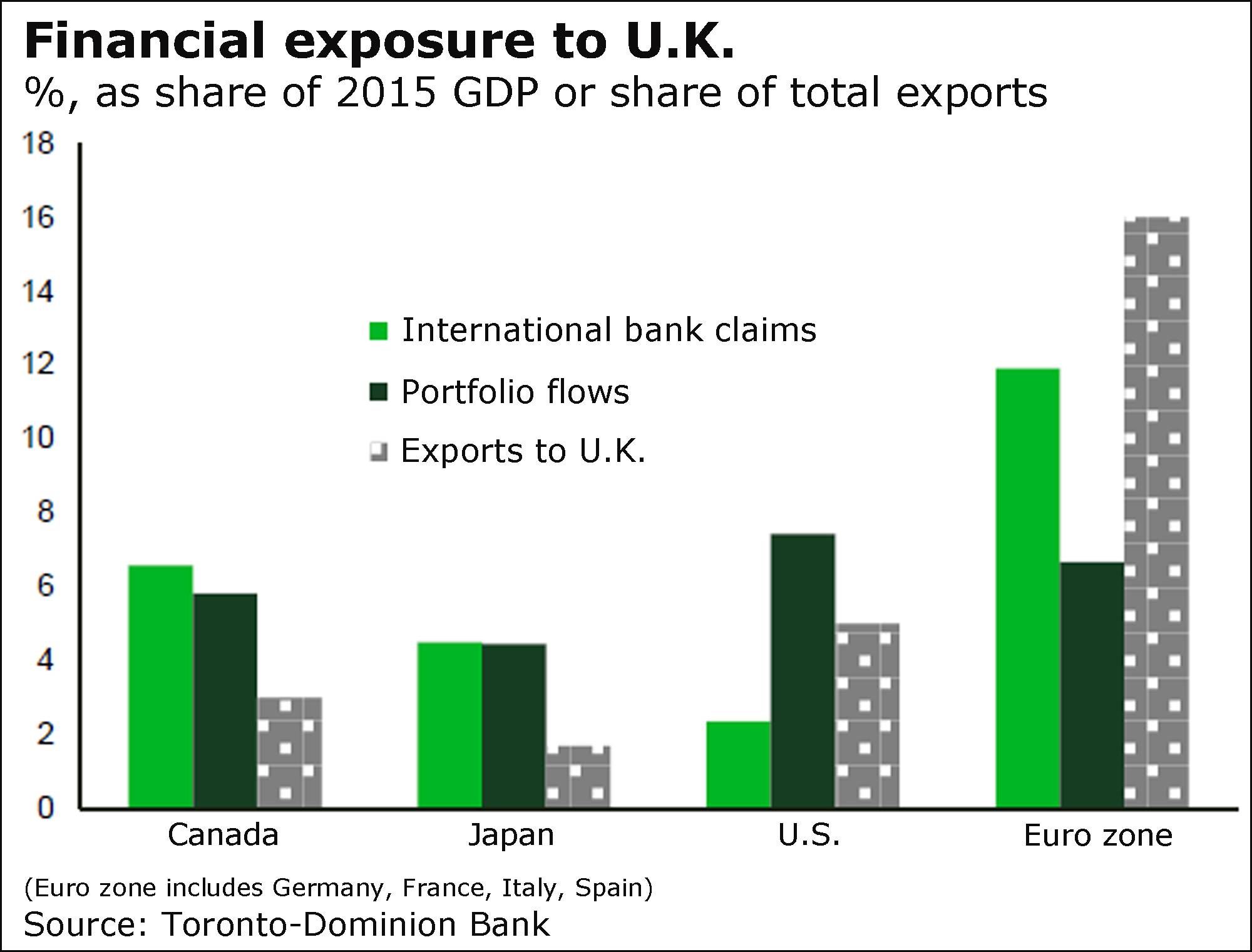 While energy companies are not directly exposed to the region, the “stronger U.S. dollar and potential concerns over global growth are likely to weigh on commodities at least in the near term,” Mr. Barasch said.

A couple of auto parts companies – Magna International and Linamar – are actually directly exposed, so watch what could happen there.

And while Canadian railways aren’t, they could be affected by the global economy, said Mr. Barasch, adding that RBC expects growth in Britain to ease by between 2 per cent and 4 per cent in the next three years.

Some sectors could benefit, though, including utilities, real estate investment trusts, and telecom and consumer staples companies.

“Lower rates should help flows into the more rate-sensitive sectors, while consumer staples have become the go-to defensive group for Canadian portfolios over the past few years.

The uncomfortable situation in Vancouver and Toronto could become that much thornier in three ways.

Already, policy makers are trying to come to grips with the surge in prices that has put home ownership out of reach for so many, and sparked widespread concerns over record household debt levels.

Cheap borrowing has, of course, been a culprit here. But undocumented purchases of Canadian real estate by foreign buyers are also believed to be playing a role.

Remember, those foreign buyers get an automatic discount because of the weak Canadian dollar.

“Also, with the Canadian dollar falling in a risk-off environment, housing becomes cheaper to some foreign buyers,” said Bank of America’s Ms. Enenajor.

Add to that the many questions about London’s future as a global financial hub.