The death of the golden goose in British Columbia and Ontario threatens to ripple through the economies of Canada’s strongest provinces.

Economists are already redoing their forecasts in the wake of policy moves aimed at taming the Vancouver and Toronto housing markets.

This is not to suggest policy makers are wrong in trying to cool things down - God knows, someone had to do something - only that there will be an impact on the economy and provincial revenues.

Which, of course, is arguably better than a burst bubble.

The frothy Vancouver market was already cooling, even before the federal government’s new measures this week and the recently introduced provincial tax on foreign buyers of area properties. And Toronto was forecast to cool at some point next year.

Both B.C. and Ontario now have to come to grips with how a slowdown in housing will affect their broader economies.

“While both provinces are expected to continue performing well over the coming years, they, too, have a new reality to deal with - increased scrutiny on the housing market,” Canadian Imperial Bank of Commerce economists Andrew Grantham and Nick Exarhos said in a new study this week. 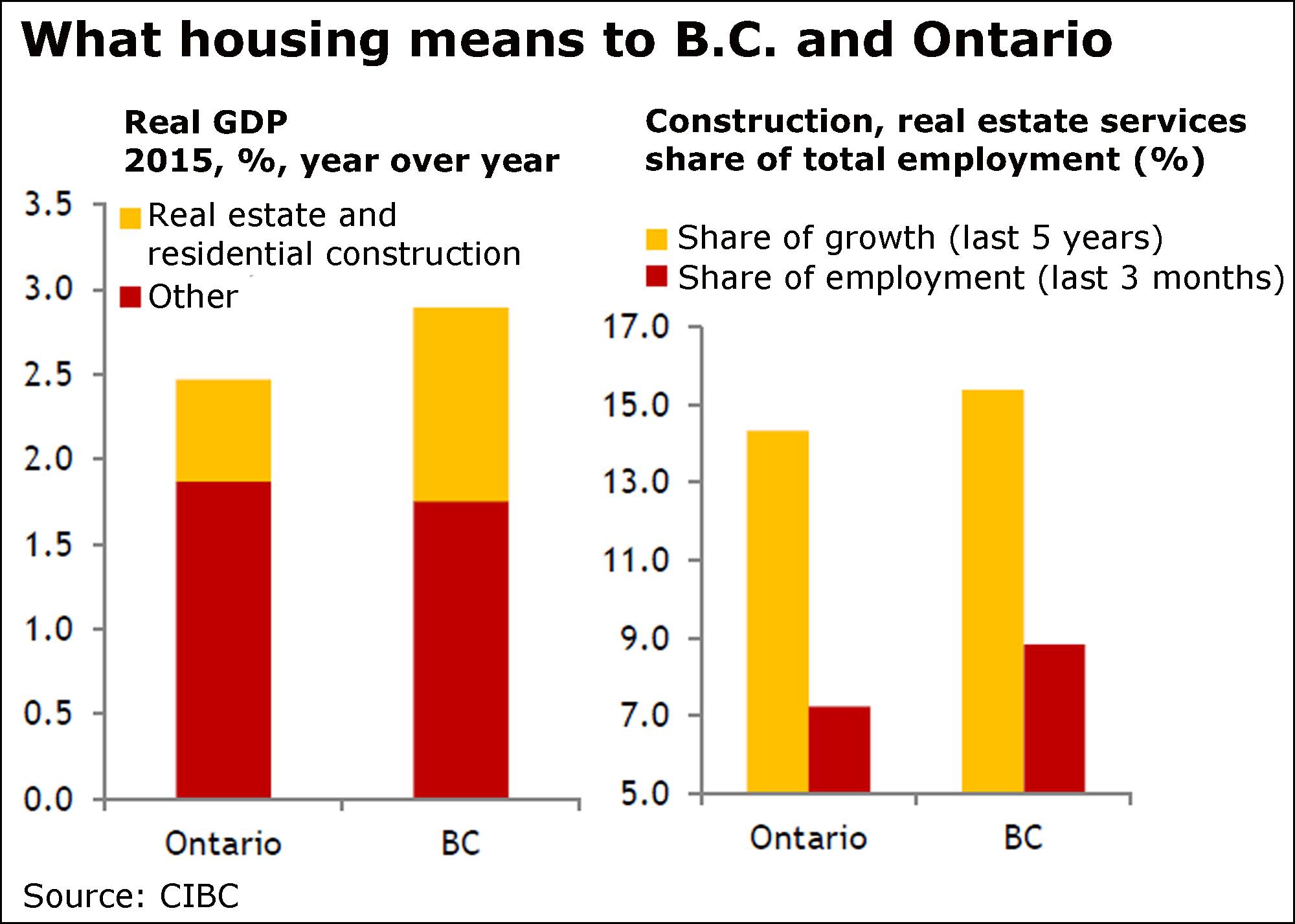 The slowdown in housing is expected to hit B.C. harder given the impact the industry has had on both the economy and the province’s finances.

The economies of the two provinces, the strongest in the country, have expanded at paces that top 2 per cent, with much of that strength coming from the housing sector, said Mr. Grantham and Mr. Exarhos.

“While housing-related activities don’t make up an outsized share of the labour market, construction and real estate services have disproportionately contributed to employment growth over the last decade,” they noted.

“And these only measure the direct impact of housing on the economy, failing to take into account indirect impacts such as retail sales for household goods and furnishings,” the CIBC economists added.

Notable, too, is that the province’s last budget didn’t factor in a “significant retrenchment” in revenues tied to housing.

B.C. has been in a strong fiscal position, but that would have looked far different absent the housing boom.

“Keeping a balanced budget without that windfall may have meant less growth in government spending, which in itself would impact GDP growth,” Mr. Grantham and Mr. Exarhos said, though land transfer taxes aren’t as important to Ontario.

Both provinces will “likely see somewhat softer growth” as the boom fades.

TD had downgraded the B.C. and Ontario economies even before the new federal measures, projecting growth will ease in B.C. to just 2 per cent next year and 1.8 per cent in 2018. Ontario is expected to also see a slower pace, of 2 per cent and 1.7 per cent.

If you want a sense of the Vancouver market after just two months of the new 15-per-cent tax, take a look at this chart from BMO Nesbitt Burns senior economist Sal Guatieri. 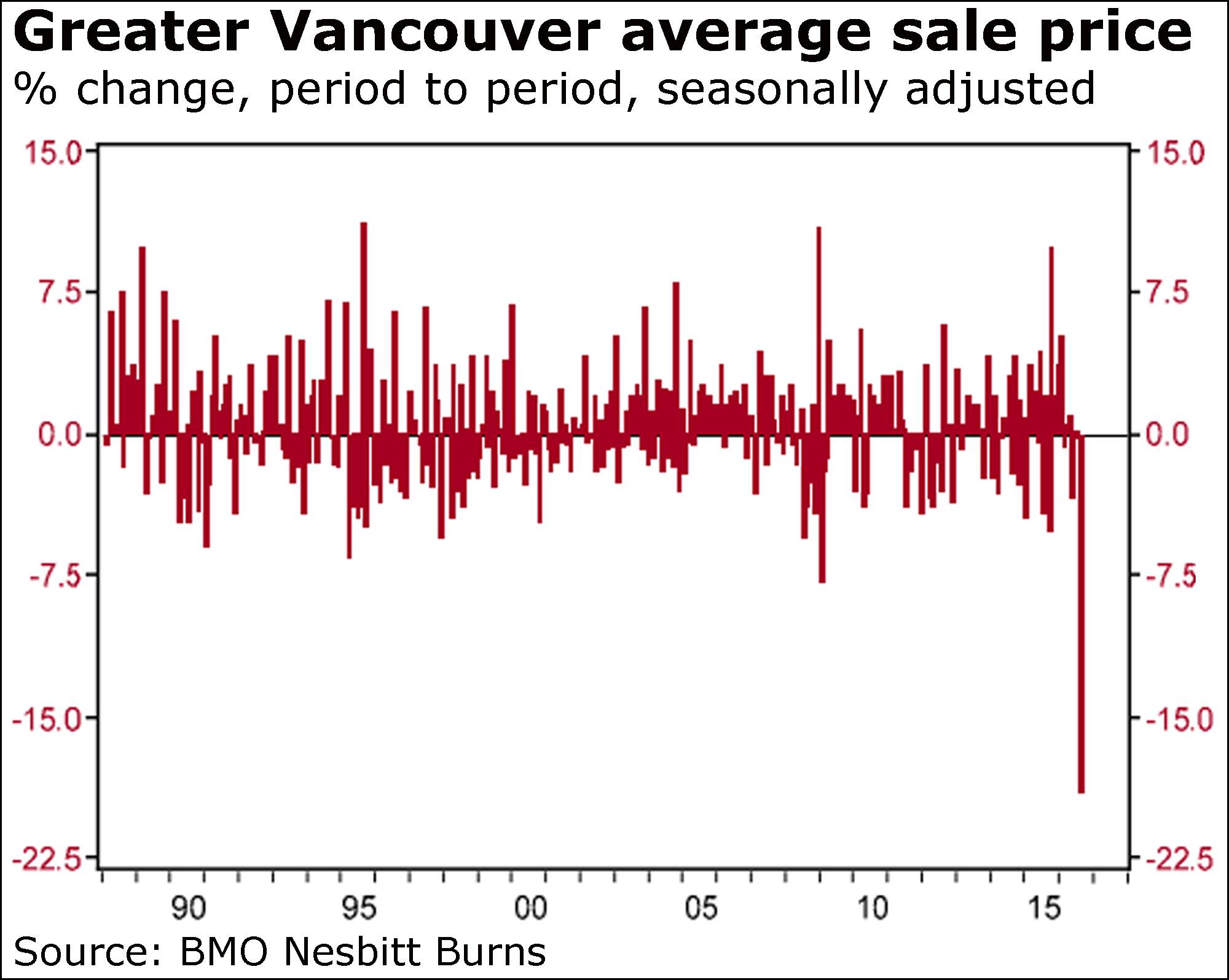 While Vancouver’s benchmark price is still up hugely, Mr. Guatieri pointed to the average sales value.

“The monthly drop was more than double the second-worst one on record,” he said.

“The collapse was almost entirely in detached homes, i.e., the segment prized by wealthy foreign buyers.”

And that was before Finance Minister Bill Morneau’s new measures. So as Mr. Guatieri put it, “stay tuned.”

We’re getting used to the extreme fluctuations in monthly jobs reports, and the September numbers certainly stick to that trend: Statistics Canada says the economy churned out 67,000 new jobs, with the unemployment rate holding at 7 per cent.

Note that the bulk of the September gains were part-time positions, as The Globe and Mail’s Rachelle Younglai reports.

Employment is now up by 139,000 from a year ago, again primarily because of part-time work.

There are still almost 1.4 million Canadians who can’t find a job.