If you plan to buy a home in Toronto or Vancouver, you’ll be paying what Toronto-Dominion Bank says are St. James Place prices for Baltic Avenue properties, feeding into “buyer gridlock” in Canada’s two hottest housing markets.

TD’s chief economist, Beata Caranci, has done a unique study of what observers believe are the frothiest markets, and how things might look on a Monopoly board.

And they sure look different than when we were playing the game as kids.

“Baltic Avenue, once considered one of the most affordable, is now fetching the price of St. James Place,” Ms. Caranci said in her recent report. “Ultimately, Toronto and Vancouver are moving the way of many international cities, where land constraints and population growth forces residents out and up. Out into suburbs and up into condominiums, be it ownership or rental.”

Which leads to “buyer gridlock” among trade-up purchasers in Toronto and Vancouver. 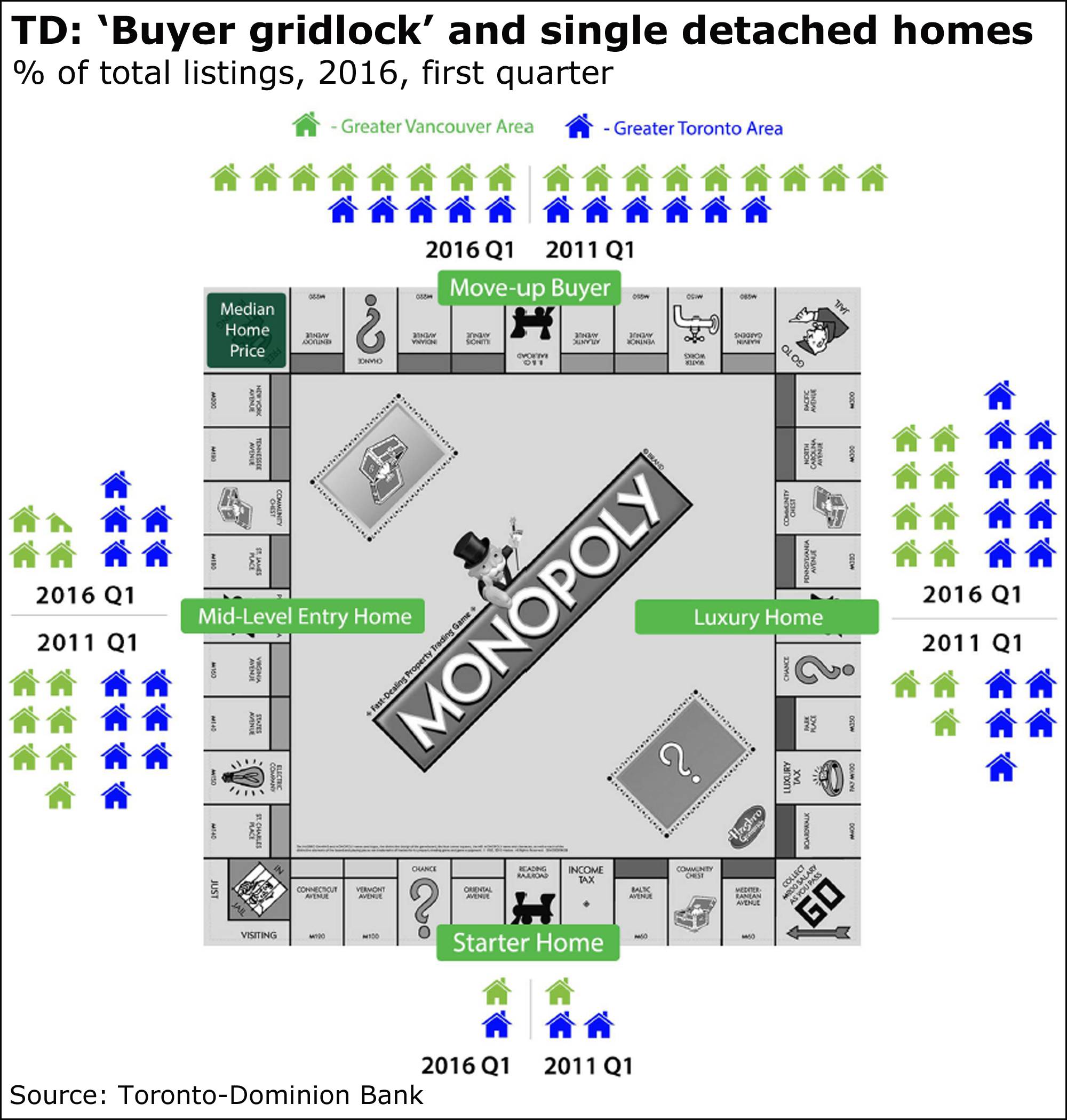 (Price levels in this TD graphic are relative to median sales prices, and each home symbol represents about 5 per cent of single detached listings. A starter home is half the median price, a move-up buyer is up to two times the median, and luxury is two times the median or greater. A mid-level entry home is everything else up to the median.)

Ms. Caranci noted that Monopoly players might normally buy something cheap like Connecticut Avenue on “the first time around the board,” but they’ll still have enough to buy, say, Marvin Gardens, which is a goal.

“If the game changes such that Connecticut Avenue fetches the price of Marvin Gardens, would this alter the selection of your first purchase?”

Buyers, she said, will often purchase an entry-level home with plans to trade up later in life. But given rising prices, making the move can come with a big mortgage or lower savings, even given the increase in the value of the entry-level property.

“In doing so, you’ll likely receive only a modestly better home or neighbourhood,” Ms. Caranci said. “Taking into account other costs associated with selling, financially it makes more sense to stay put and/or renovate. If this sounds familiar, you have a case of buyer’s gridlock.”

Entry-level properties have appreciated at a slower pace, she added, citing the cost differences between condos and detached homes in Toronto and, to an even greater extent, Vancouver.

“The widening price gap between an entry-level home and a trade-up home becomes a ‘barrier to entry’ for existing homeowners,” Ms. Caranci said. “This reduces churn in the market, elevating prices and scaling back the selection of choices. This buyer gridlock effect is made worse as homeowners respond by renovating their entry-level homes.”

As in, an entry-level property then becomes a trade-up because of the renovation.

There are fewer single homes for sale in the two cities, Ms. Caranci said. And fewer owners are asking below the median price of those that are listed.

“So as existing home buyers try to move along the Monopoly board, there are fewer buying opportunities until you cross Kentucky Avenue, and for Vancouver homeowners it’s more like Pacific Avenue.”

Where your piece sits on the board has big consequences, according to Ms. Caranci: First-time buyers are squeezed into condos, while trading up is ever more difficult.

“As a result, demand for a detached home is being fulfilled by an outword push into adjacent metros, inflating prices in markets that are further afield to their first-choice destination for live, work and play.” 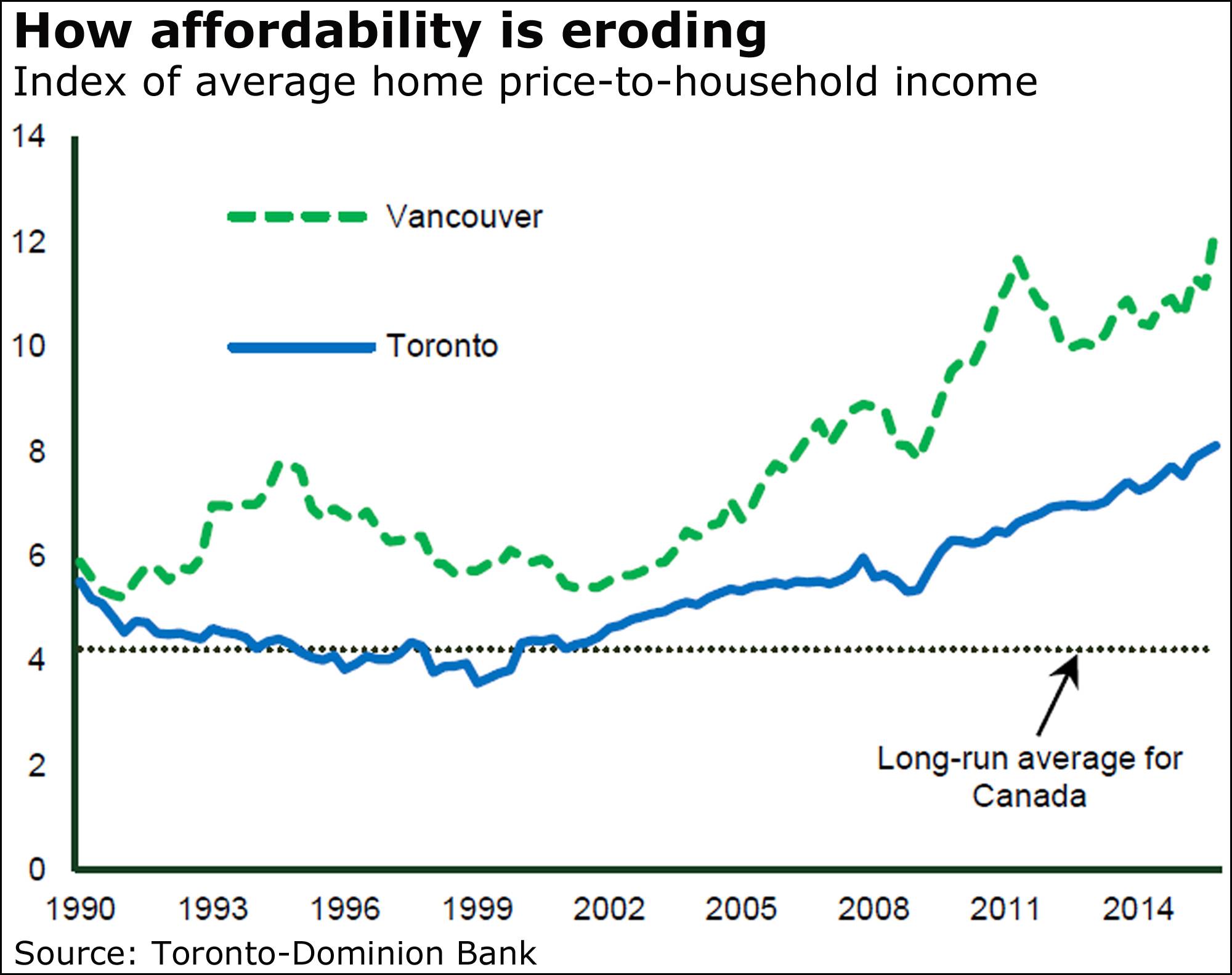 “There’s no get-out-of-jail-free card on this board,” she said.