How job losses stack up

Canada has been losing high-paying jobs for the first time since the recession.

David Madani of Capital Economics crunched the latest Statistics Canada numbers and found that “employment and income trends have worsened,” with a slowdown in the rise of lower-paying jobs and an outright loss of higher-income positions largely because of the oil shock. 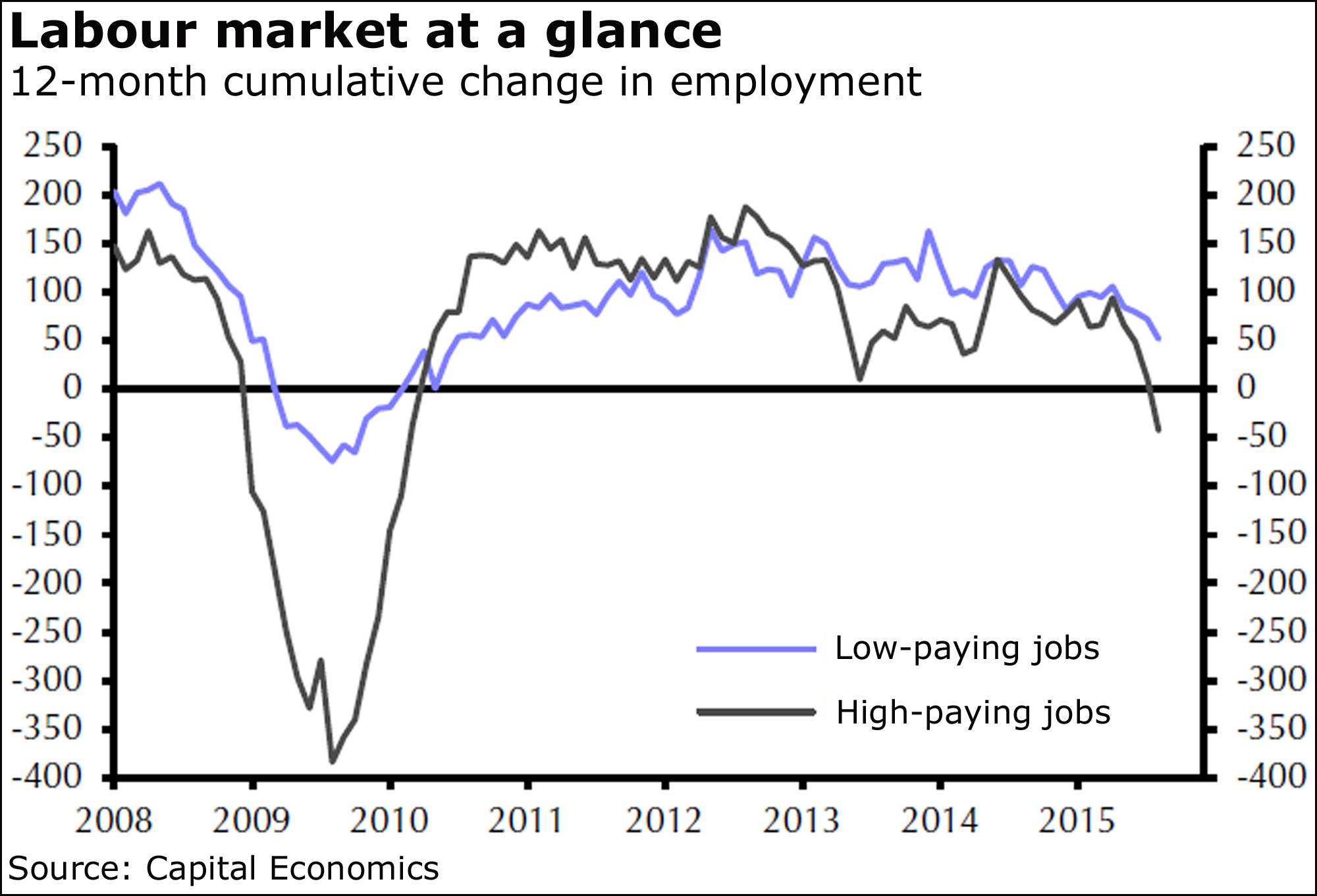 Mr. Madani’s chart, above, illustrates how higher-paying positions have dwindled over 12 months, cumulatively, to the end of August.

“Since oil prices first began to slump more than a year ago, the 12-month cumulative change in non-farm employment has declined steadily, with the number of higher-paying jobs contracting for the first time since the severe 2008-09 recession,” said Mr. Madani, the firm’s Canada economist.

“With non-energy exporters still struggling and energy producers slashing investment and hiring, we expect net job creation to be modest in the coming year, with the unemployment rate rising to 7.5 per cent by the end of 2016.”

Using Statistics Canada’s report on employment earnings and hours, Mr. Madani looked at pay levels for industries that are above and below the average to come to his conclusions.

Higher-income positions include those in certain professions, management, education and the public sector. Lower-paying jobs are those in retailing, administration support, accommodation and food services.

Much is related to the plunge in crude prices since mid-2014.

“The largest job losses have been in mining, where hourly and weekly earnings are among the highest of any sector in the economy,” Mr. Madani said.

“There has also been a marked slowdown in the high-paying construction sector. Meanwhile, there hasn’t been any positive offset from the high-export export-driven manufacturing sector. It still looks to be going sideways.”

On the services side, Mr. Madani added, Canada has seen a “big slowdown” in high-paying areas of professional, scientific and technical services. 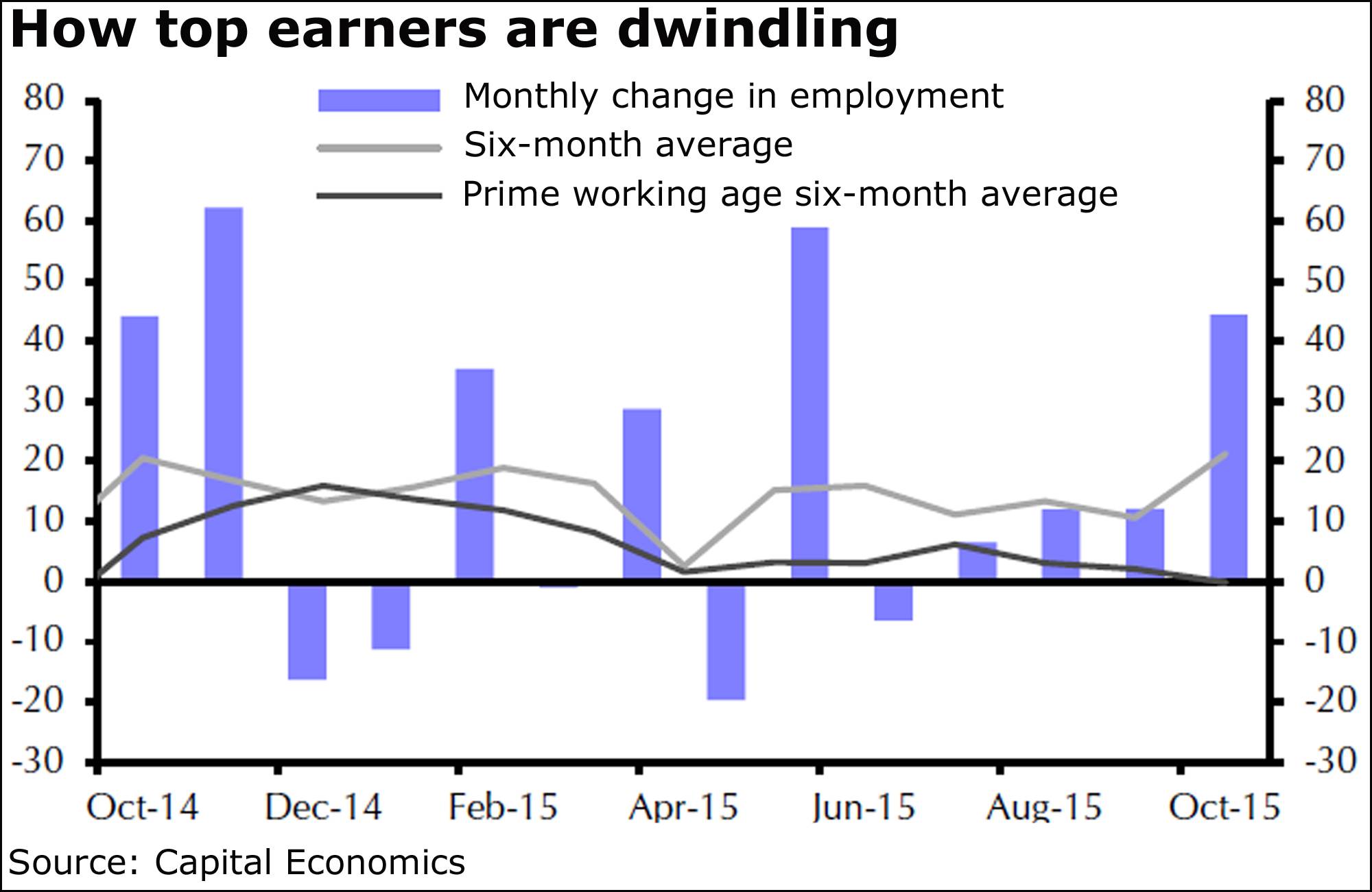 Look, too, at this chart that shows how unemployment among “prime working-age individuals,” who Mr. Madani said are often top earners, and you see it moving higher. That was based on a separate Statistics Canada labour force survey.

While Mr. Madani’s forecasts may differ somewhat from others, economists still see Canada’s jobless rate hovering at about the 7-per-cent mark for some time.

Of course, the situation is improving in some regions, while growing more dire in others. In Alberta, for example, the oil shock has pushed unemployment up sharply to 6.6 per cent, marking the province’s worst showing in five years.

This deal's for you

As the names of the companies involved suggest, the brewing industry has consolidated over the decades.

Today marks another chapter, with the proposed acquisition of SABMiller by Anheuser-Busch InBev for almost €70-billion ($106-billion U.S.).

At the same time, to get past regulatory hurdles, SABMiller is selling a stake in its joint venture with Molson Coors to its partner. The takeover was formalized this morning.

The first part of the deal would combine the already No. 1 and No. 2 beer companies, creating what InBev chief executive officer Carlos Brito dubbed “the world’s first truly global brewer” and putting brands such as Budweiser, Stella Artois, Peroni and Grolsch under one roof.

“This is likely to trigger a merry-go-round of asset stripping and reorganization by AB InBev as it raises financing and pre-empts competition requirements,” said IG market analyst Alastair McCaig.

“Considering the strength of the U.S. dollar especially as speculation over interest rate rises intensifies, we could well see this being the first of many cross-Atlantic shopping trips from U.S. firms.”

The Nov. 11 online buying frenzy in China has become a retail ritual as important as Black Friday in the U.S.

But this year, fears of a wobbling Chinese economy gave it a special importance. Would tough times in the country’s industrial sector keep Chinese consumers from taking out their wallets?

The answer took roughly 12 minutes and 28 second to confirm, The Globe and Mail’s Nathan VanderKlippe reports from Beijing. Moments after midnight, shoppers on properties run by online giant Alibaba had already poured out 10 billion yuan ($2.09-billion) on purchases.