Canada-U.S. trade tensions have moved quickly from “tweaks to teats,” as Bank of Montreal puts it.

Next up, and long contentious, is softwood lumber.

Indeed, the decision by the U.S. Commerce Department on preliminary countervailing duties Tuesday promises to raise the temperature to the point where milk boils.

Which is where we left off last week as President Donald Trump, first in America’s dairy heartland of Wisconsin and then later at the White House, unleashed a scathing attack on Canada’s dairy industry and its supply management regime.

He also cited energy and lumber, leading observers to warn that Canada will face tough negotiations when the North American free-trade agreement is opened for discussion again. His comments also suggested he wants more than just the “tweak” to the Canada-U.S. relationship that he initially suggested.

“A recent Canadian decision to apply restrictions on a milk product ingredient, that was previously unrestricted, provided a convenient focus for the president, so it’s unclear whether he had issue with this one recent decision or the system in general,” said BMO deputy chief economist Michael Gregory.

“It’s noteworthy that nothing was said about poultry and eggs,” he added in a report titled “From tweaks to teats.”

“However, this did serve notice that, potentially, Canada’s dairy and other supply management systems, currently excluded from NAFTA, could find their way back on the negotiation table later this year.”

Then there are Canadian softwood lumber exports, which hold more than 30 per cent of the U.S. market.

As The Globe and Mail’s Brent Jang reports, the Commerce Department is expected Tuesday to detail preliminary countervailing duties on those exports.

Expect levies of 20 to 30 per cent, according to BMO, with a final decision next year and a second finding on anti-dumping duties in June.

“Though prices have ebbed slightly, they still remain over 15 per cent above their January levels as holdout U.S. buyers were finally forced to bite.”

Canada is the U.S. administration’s latest target. Remember Mr. Trump’s earlier trade threats against Mexico and China, though he backed off his vow to label Beijing a currency manipulator in exchange for help against North Korea. Though there is the steel probe launched last week.

“Elements in the White House want to keep the protectionist drum beating, so if not China this week and having beaten the Mexican case to death, it might have simply been Canada’s turn,” Mr. Gregory said.

Mr. Trump has been moving methodically to advance his trade agenda, noted Angelo Katsoras, geopolitical analyst at National Bank of Canada, adding there’s a lot the president can do on his own while skirting Congress.

Perhaps Beijing, having been let off the hook for now, should take note of how Mr. Trump has moved from tweaks to teats where Canada’s concerned.

Of course, maybe Ottawa should take some solace from his about-face on China. As in, maybe there’s something Canada has that Mr. Trump wants. Like oil.

Indeed, if you remove energy from the equation, the Americans would be running a trade surplus with Canada of $28-billion (U.S.), rather than the small $11-billion deficit, noted BMO’s Mr. Gregory.

“As America’s largest source of energy imports, any U.S.-based trade restrictions (there is a buzz in Washington about a potential energy import tax to help pay for tax reform and cuts elsewhere) will almost immediately hurt consumers (voters) via pump prices.”

Bets against the Canadian dollar are rising by the week.

The latest report from the U.S. Commodity Futures Trading Commission, measured as of last Tuesday and released Friday, show the net short position against the loonie now at $2.5-billion.

That’s the highest since February, 2016, foreign exchange strategists Shaun Osborne and Eric Theoret said in a research note on the CFTC report. 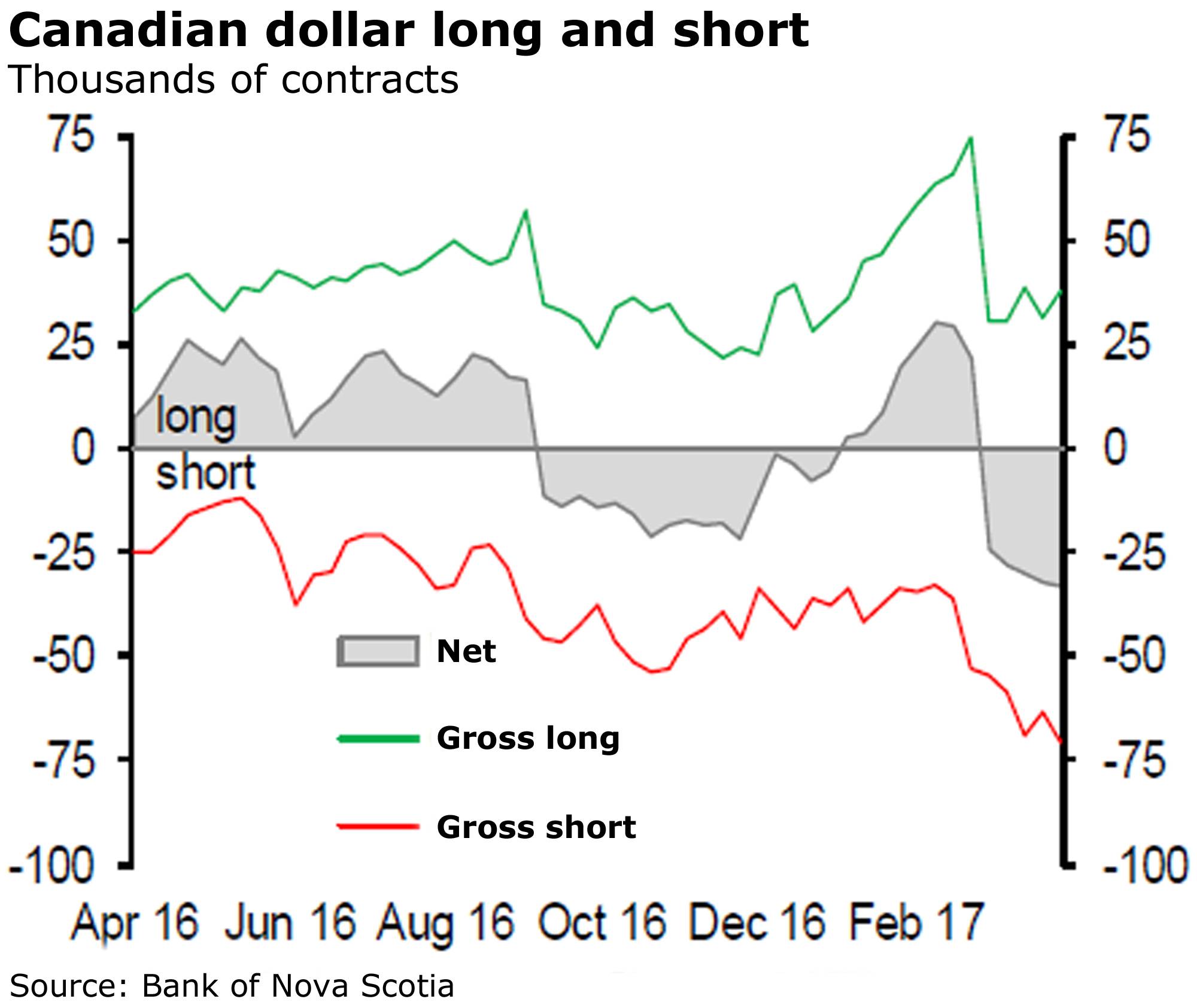 “Shorts are in control and continue to build, as longs remain relatively muted following the record liquidation from March,” they said.

It's the economy, stupid

Pity the poor president who has to acknowledge that economic growth slowed markedly as he took the helm.

The real facts, to be released Friday, are expected to show that the U.S. economy expanded in the first quarter at an annual pace of 1.2 or 1.3 per cent, slower than the 2.1 per cent of the last three months of 2016.

“As has happened in a number of years since the crisis, Q1 data are set to show a deceleration in economic growth,” said Royce Mendes of CIBC World Markets.

“Although jobs and incomes have continued to march forward, household spending appears to have cooled down, taking the overall growth rate along for the ride,” he added.

“That said, there is evidence to suggest that this is simply an issue with the seasonal adjustment that the [U.S. Bureau of Economic Analysis] is making to the raw data. As a result, we’re willing to overlook much of the recent soft patch.”

The British government, now in the midst of an election campaign, will also report first-quarter growth numbers Friday.

And the same day, Statistics Canada will tell us how our economy fared in February.

What else to watch for this week

There are some lesser economic reports beyond those biggies, and what’s likely to be a not-very-exciting policy decision from the European Central Bank.

And the Ontario budget, though the province stole the limelight last week with its 16-point plan to cool the housing market.

Corporate earnings, though, will be coming in fast and furious over the next several days. Included are some forestry companies, so we’ll see what they might have to say about the U.S. duties, and energy concerns that will give us the latest on oil prices.

The S&P Case-Shiller home price index is expected to show a rise of 5.7 per cent from a year earlier.

“Underlying sales are expected to see a decent gain, consistent with the persistent strength in employment and improving consumer sentiment. With goods prices seeing a small decline in the month, look for volumes to see a similar-sized increase.”

First up is the ECB, which is expected to hold the line on everything, though markets will be listening closely for what central bank chief Mario Draghi has to say.

“After the market’s ‘hawkish’ interpretation of the March meeting we expect that President Draghi will purposely look to strike a more dovish tone in his post-meeting press conference along the lines of his recent speech to the annual ‘ECB and its Watchers’ conference earlier this month, at which he emphasized that, despite an improving growth backdrop, the conditions under which the ECB could begin to consider tightening policy had yet to be met, meaning that that there was no cause to deviate from the current policy path and forward guidance, including what it implied about the sequencing of policy changes,” said observers at Royal Bank of Canada.

The Bank of Japan is also up with a policy decision, and also expected to hold the line.

Later in the day, we’ll get the Ontario and Nova Scotia budgets.

The Ontario fiscal plan, said CIBC chief economist Avery Shenfeld, will be “helped by revenues associated with solid growth in the province.”

The needle isn’t expected to move much when Statistics Canada reports on economic growth in February, after January’s nice bounce.

Having said that, economists could change their forecast for Friday’s reading after they see the retail sales report earlier in the week.

In Britain, the surprise June 8 election called last week by Prime Minister Theresa May is all about Brexit, not the economy.

Still, RBC expects the preliminary estimate to be first-quarter growth of 0.4 per cent.

“This expectation is based on a bounce-back in activity in some of the more erratic parts of industrial production in March (where we don’t yet have the figures) following a weak start to the year,” RBC said.

“Even with the expectation of activity recovering in March, the broader narrative remains that we look for GDP growth to slow in 2017,” the bank said.