Canada’s economy is on life support from the federal government and, still, the Bank of Canada. The question being asked now is whether it needs another jolt from the Trudeau Liberals.

Does the economy really need it? Should the Liberals do it? And can Ottawa afford it?

“In fact, growth is so sluggish, there is now open talk that Ottawa may try to juice the economy in the coming fall economic and fiscal statement,” said BMO Nesbitt Burns chief economist Douglas Porter.

Do we need it?

And he’s not likely to go any further, having already cut interest rates twice, lest he drive record household debt levels even higher – meaning the ball is in Ottawa’s court. 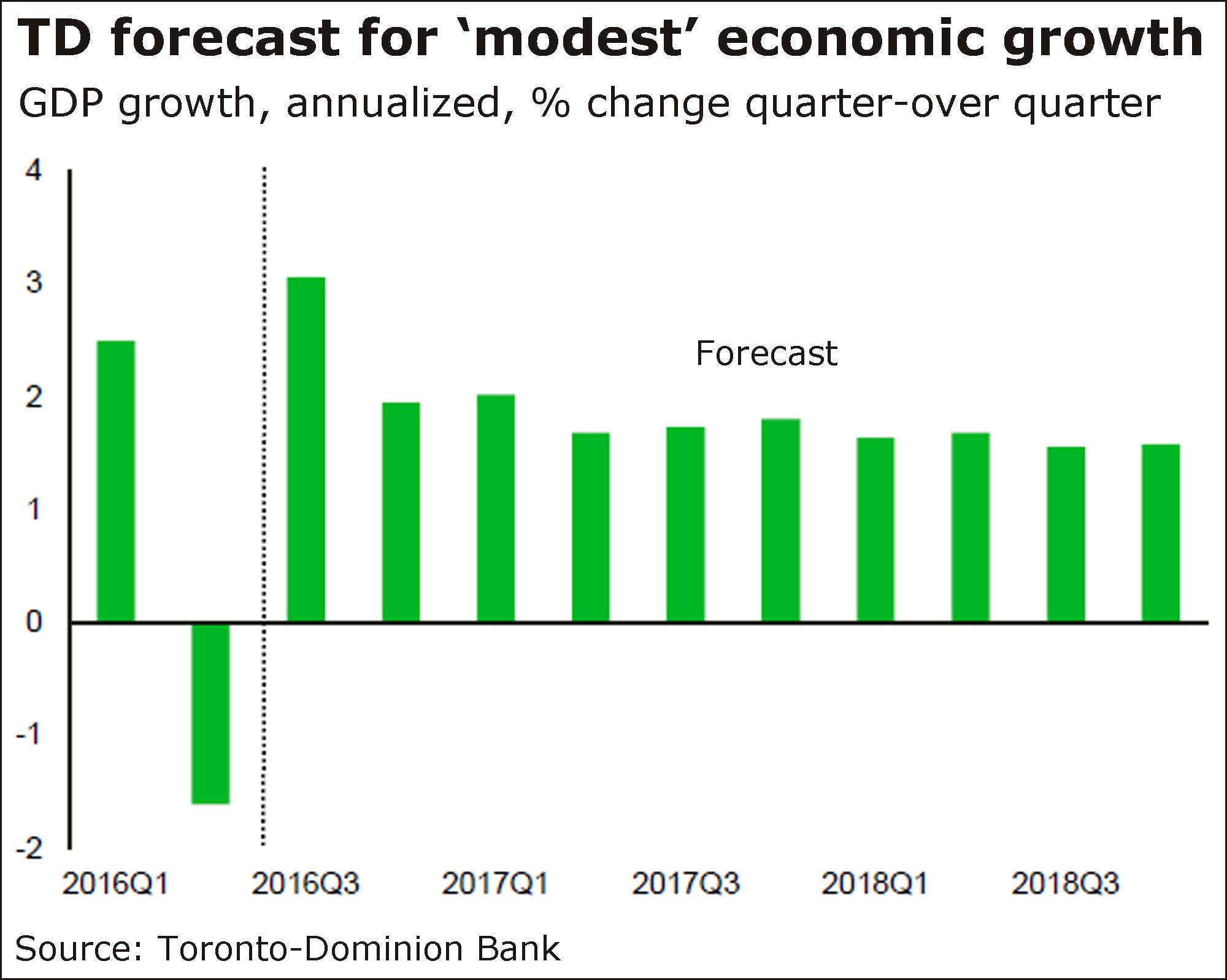 The economy has done little over the past 18 months, expanding by just “a meagre” 0.5 per cent, as Toronto-Dominion Bank pointed out in a recent forecast that calls for real growth this year of only 1.1 per cent despite what’s expected to be a stronger showing in the quarter now winding down.

Canada has been hit by the oil shock and the Alberta wildfires, and TD projects growth will perk up over the next couple of years but still fall shy of 2 per cent, even with federal stimulus measures.

Remember, too, that unemployment remains stubbornly high, and little improvement is expected.

Should the Liberals do it?

The Bank of Canada won’t remove its life support by raising interest rates, probably for a couple of years yet.

But its hands are arguably tied from doing more because of how low interest rates have already fuelled consumer borrowing. Which means ...

“Considering Canada’s ever-growing mountain of household debt, overheated housing markets in Vancouver and Toronto, and the unintended (some might say perverse) consequences of low/negative rates observed in other advanced countries, it might take additional fiscal stimulus to put our economy on a stronger glide path,” said Warren Lovely, National Bank of Canada’s chief of public-sector research and strategy.

“This is one of the key questions the federal government will need to grapple with as it prepares for the 2017 budget.” 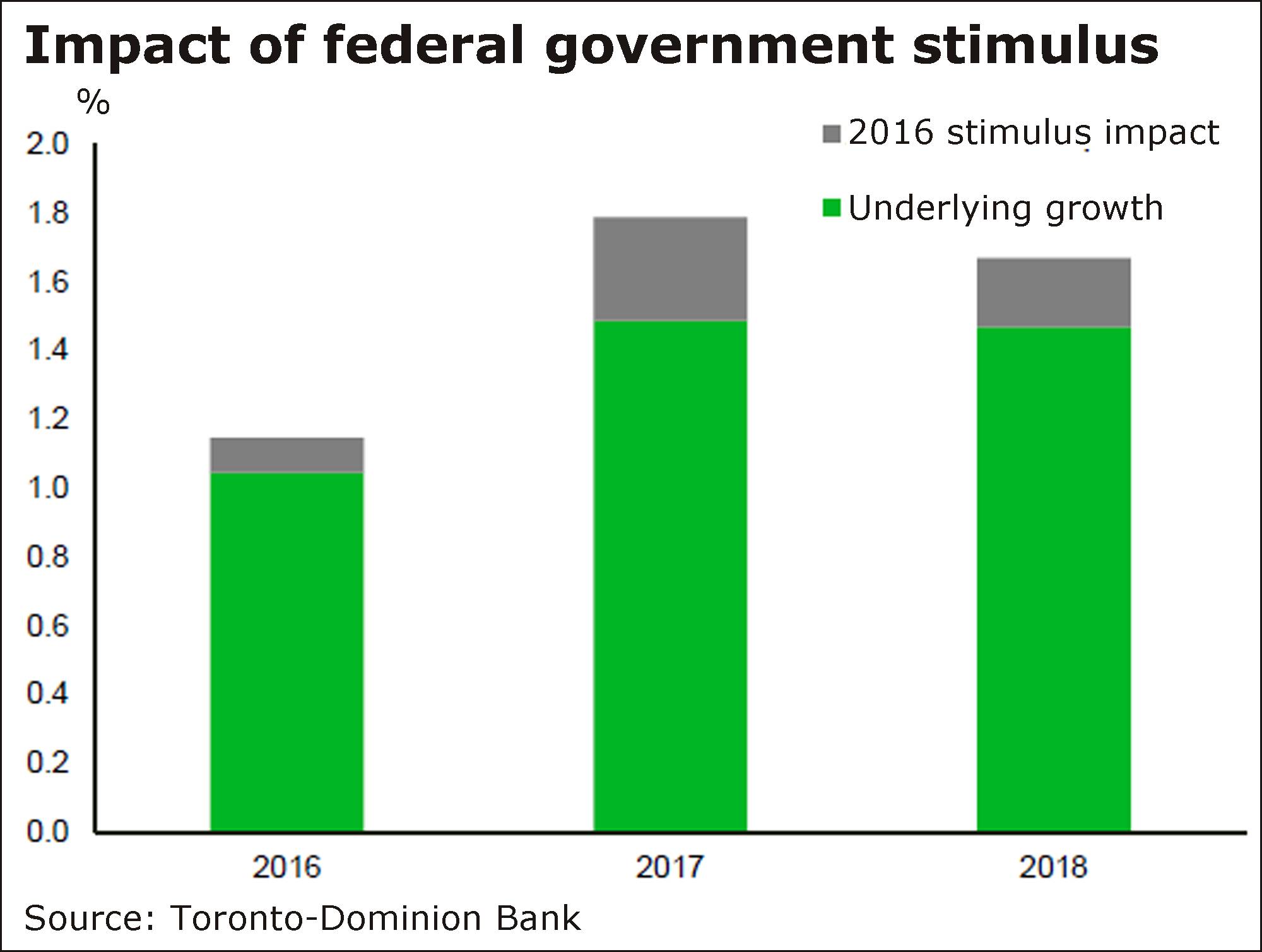 Government stimulus takes time to filter through the economy, and, according to TD chief economist Beata Caranci, the Liberal effort should really make its mark in 2017 and 2018, adding to economic growth by 0.3 and 0.2 of a percentage point, respectively.

BMO’s Mr. Porter, for one, doesn’t think the government should act at this point.

“I don’t see the urgency – they already have a fiscal spending plan in place, which is quite substantial, and they should first see if that ultimately works, Mr. Porter said.

“And if it doesn’t, one has to ask, why should we believe even more spending will do the job?” he added.

“I would (almost) never argue against tax cuts – especially anything that improves incentives (i.e. lower income taxes) – so that would be welcome. But I doubt they are considering that angle.”

Which brings us back to the outlook for an embattled economy.

“Optimists will point to existing fiscal stimulus that’s in the pipeline, alongside hopes for a pickup in stateside demand,” Mr. Lovely said in a recent analysis.

“Oh yes, there’s that cheapish loonie too,” he added, noting that National Bank is “fundamentally more cautious on Canadian growth … not just in 2017 but further out.”

Can Ottawa afford it?

It’s complicated, and again may depend on who you ask.

The Conservatives who were driven from power would of course say no. As may some economists. And whether the Liberals can afford it goes some way to answering whether they should.

We’ll see what Mr. Morneau has to say on the subject. But remember, there are his favoured people, the middle class, to worry about. 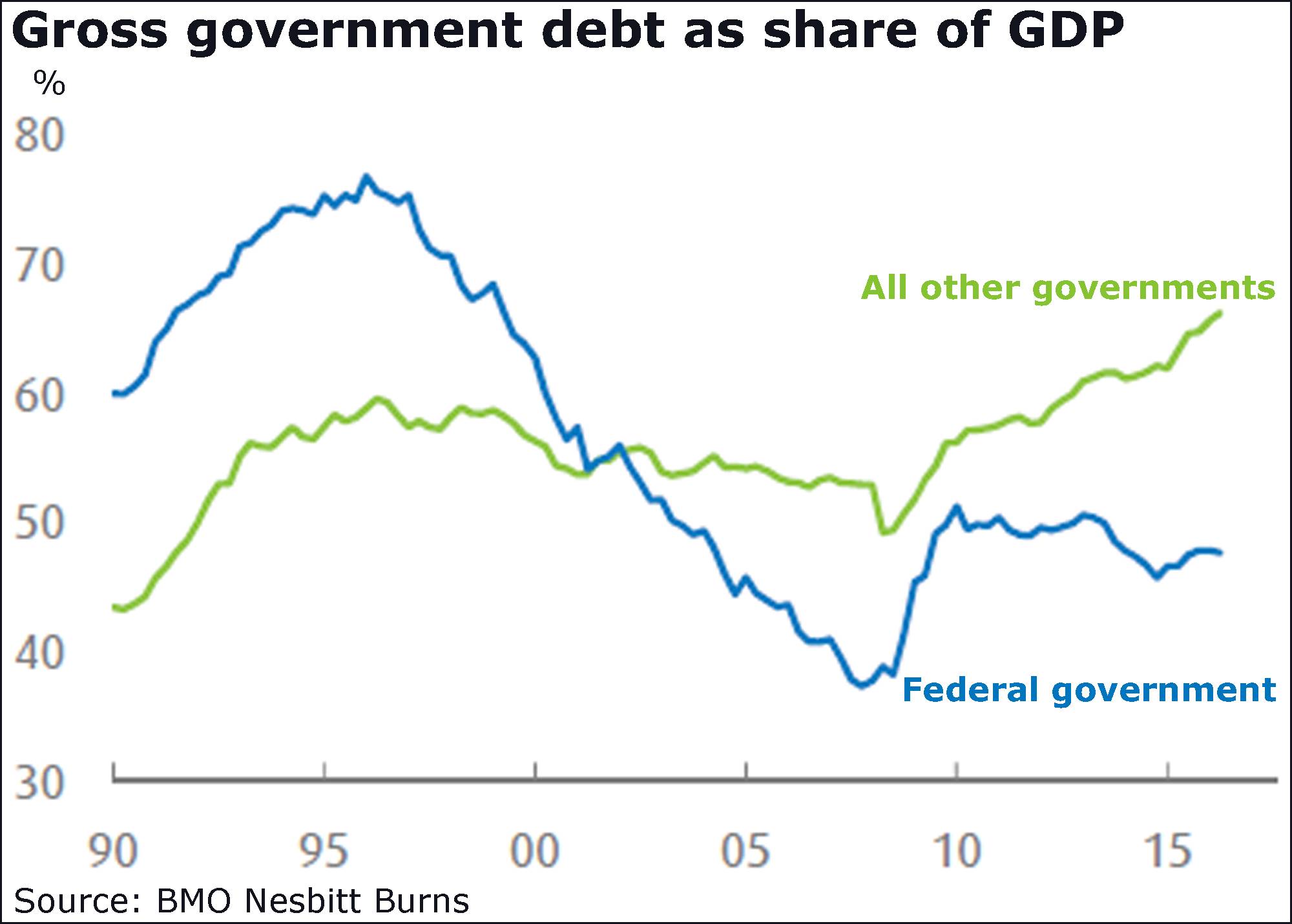 While that can be “modest” to begin with, shortfalls in revenue “can multiply quickly.”

And when all is said and done, the government could see $45-billion “evaporate” between now and the 2020-21 fiscal year.

That’s based on the difference between economic-growth projections in the last budget and how National Bank expects it will actually play out.

But slower growth would also mean lower-for longer interest rates that could save $15-billion over the same timeframe.

Do the simple math, and Ottawa then faces $30-billion less in revenue than what Mr. Morneau’s last budget assumed.

That just happens to be the size of the buffer, so the government need not be offside.

Mr. Lovely lauded the Liberals for that buffer, noting that Ottawa may use “every cent of it” to meet its targets.

All eyes are on Algiers, where major oil players meet this week amid speculation of a production deal among OPEC members.

Don’t expect much, though. As always.

Suggestions last week that Iran could support a deal buoyed oil prices last week, though Saudi Arabia soon put the kibosh on that idea, saying it didn’t expect an agreement that would bolster crude.

“Reports from the Algerian oil minister over the weekend that claimed that Saudi Arabia had offered to cut its output to January levels has stabilized prices in Asia but also reinforces how difficult any agreement is likely to be,” said CMC Markets chief analyst Michael Hewson.

“It is therefore not unrealistic to expect that the outcome of this week’s meeting could well act as a significant factor on the direction of markets this week, and given that OPEC has failed to agree much of anything in the last 12 months, it seems unlikely that it will start now, though it could kick the oil barrel towards the November meeting.”