Canada is struggling with what Moody’s Analytics calls a “loonie predicament.”

What that means is that the energy provinces are in deep trouble from the collapse in crude prices, while the industrial regions are on a roll as lower oil prices depress the value of the Canadian dollar, thus helping to boost exports.

So for Ontario to prosper because of the currency, Alberta must suffer.

“The drop in oil prices and the cheaper loonie offer the promise of increased cost competitiveness for Canada’s major industrial centres across Ontario and Quebec, even while it represents a threat to major energy-producing provinces such as Alberta, Saskatchewan, and Newfoundland and Labrador,” said Paul Matsiras, an economist at Moody’s Analytics, a sister company to the ratings agency. 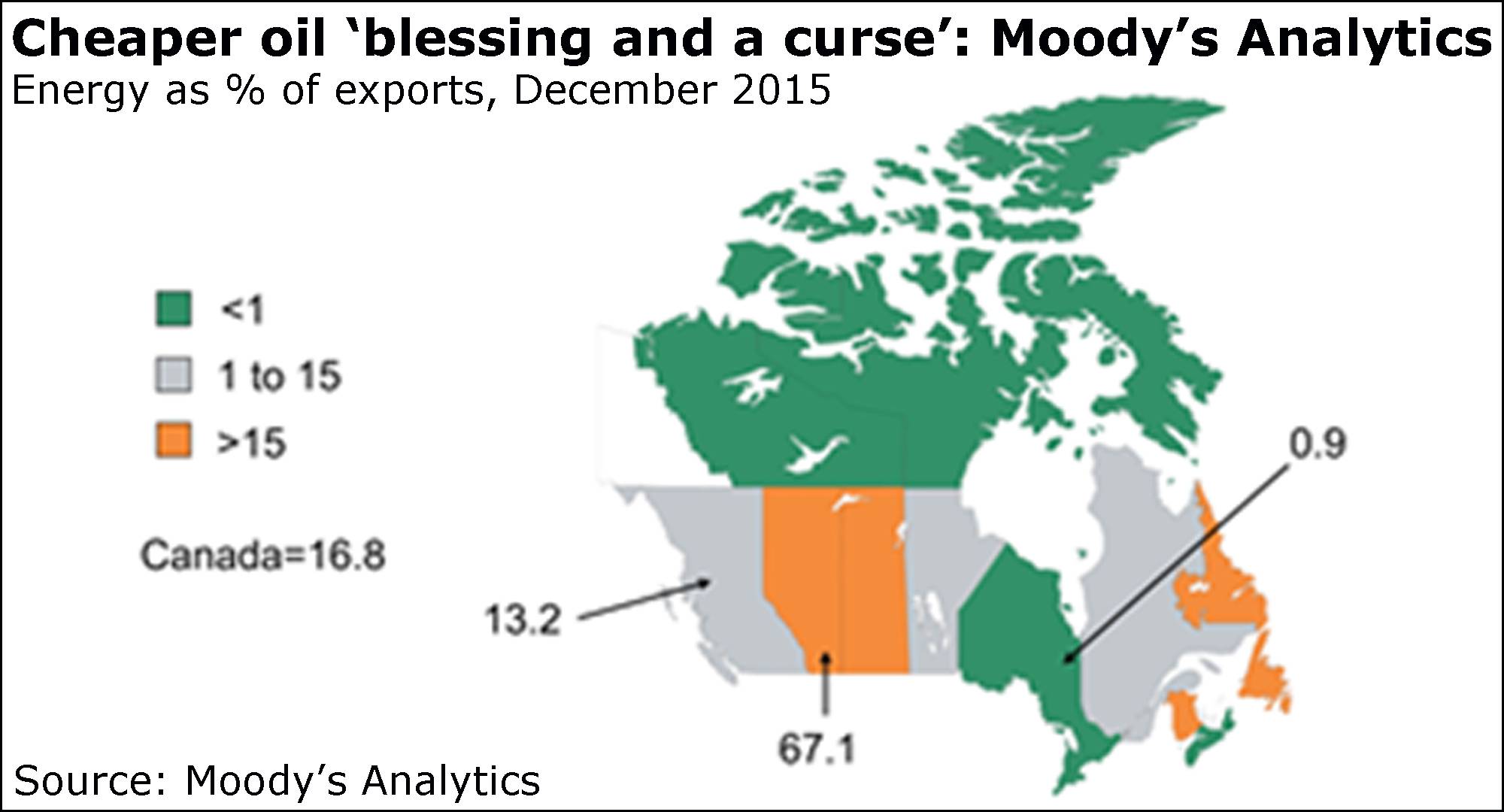 Mr. Matsiras cited two recent reports, one showing the spike in unemployment in Alberta, which is home to Canada’s oil patch, the other highlighting a surge in exports.

As The Globe andMail’s Rachelle Younglai reports, Alberta’s jobless rate now stands at 7.4 per cent, above the national average for the first time in almost 30 years.

And as David Parkinson reports, Canadian exports surged by almost 4 per cent in December from a month earlier, according to the latest reading.

But here’s the thing: All exports don’t react the same way to shifts in currency. So while cars and other consumer products have been buoyed both by the low loonie and a pickup in U.S. demand, said Mr. Matsiras, Canada’s energy exports have been hit by stronger oil production in America.

“Consequently, the collapse in oil has shifted the regional balance of economic performance in Canada,” Mr. Matsiras said.

“Moody’s Analytics expects oil prices to start to firm later in 2016, but prices below $80 through the foreseeable future will continue to undermine the Alberta and Saskatchewan economies.” 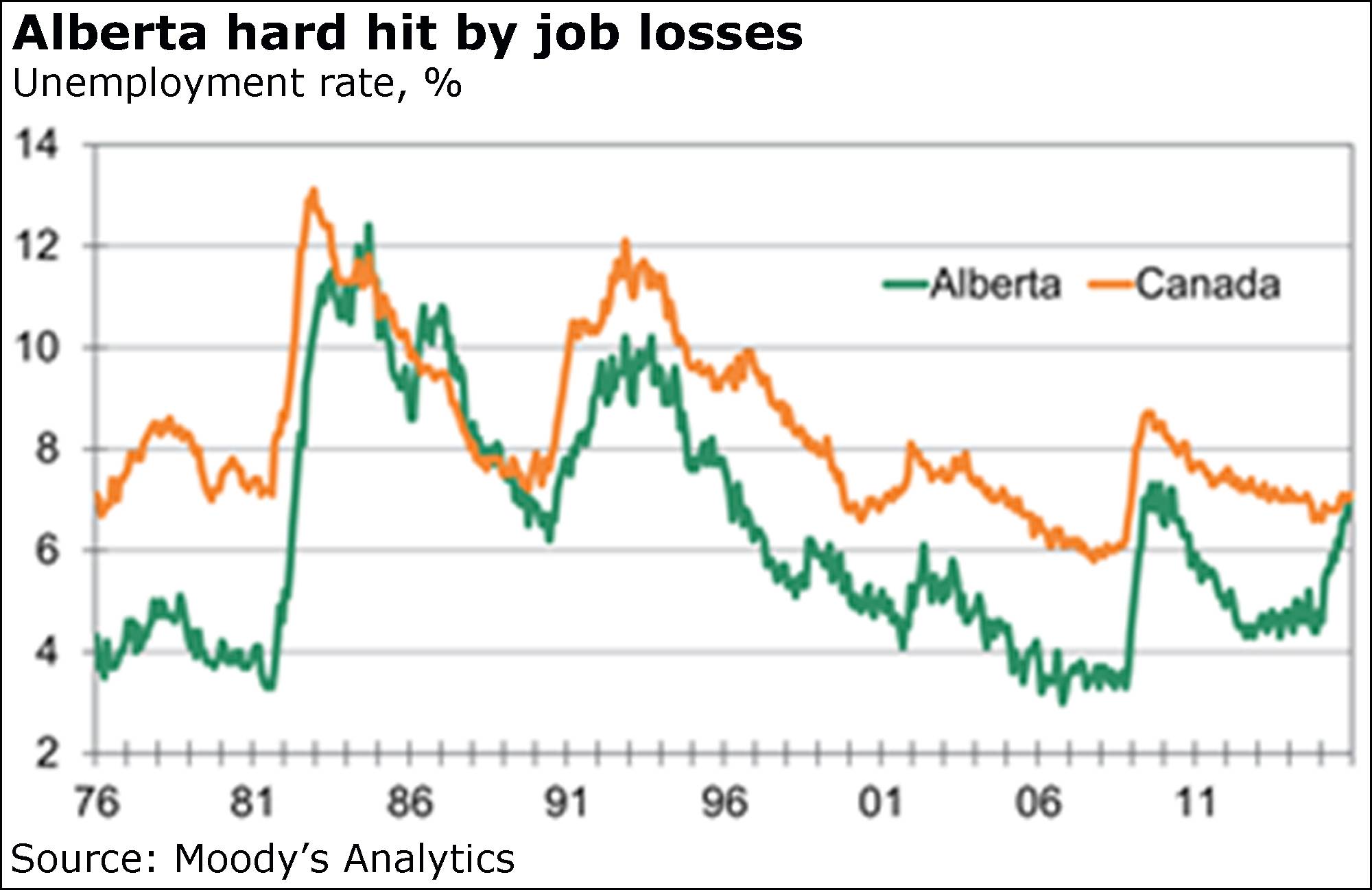 Many forecasters believe Alberta is in its second year of recession, while Ontario and British Columbia are leading the provinces in economic growth.

The Canadian dollar has rallied somewhat over the past several days, but it remains low, and analysts don’t see much of a bounce in the offing.

Even in the wake of the recent mini-rally, BMO Nesbitt Burns, for example, still sees the loonie tumbling to just below 68.5 cents U.S. by the second quarter.

There are other factors at play, of course, though oil is the main one affecting the loonie, which is back down to below 72-cent level today.

If both oil and the currency remain depressed, don’t expect a reversal in the reversal of fortune.

Stocks are sinking around the world this morning as investors await the latest pronouncements of the Federal Reserve later this week.

Tokyo’s Nikkei gained 1.1 per cent, while Hong Kong and Chinese markets were closed.

“While equity investors are likely to get a break this week from concerns about the Chinese economy due to Chinese New Year, attention is now set to switch to Washington, D.C., when Fed chair Janet Yellen gives testimony to U.S. lawmakers and Wednesday and Thursday, and her comments are likely to be closely scrutinized for any evidence of concern about weakness in the U.S. economy, in light of some of the softness in recent U.S. data,” said CMC Markets chief analyst Michael Hewson.

CIBC’s recession barometer is flashing “worried, but not yet ready to wave a red flag.”

In this case it’s like golf, in that you want a lower score. 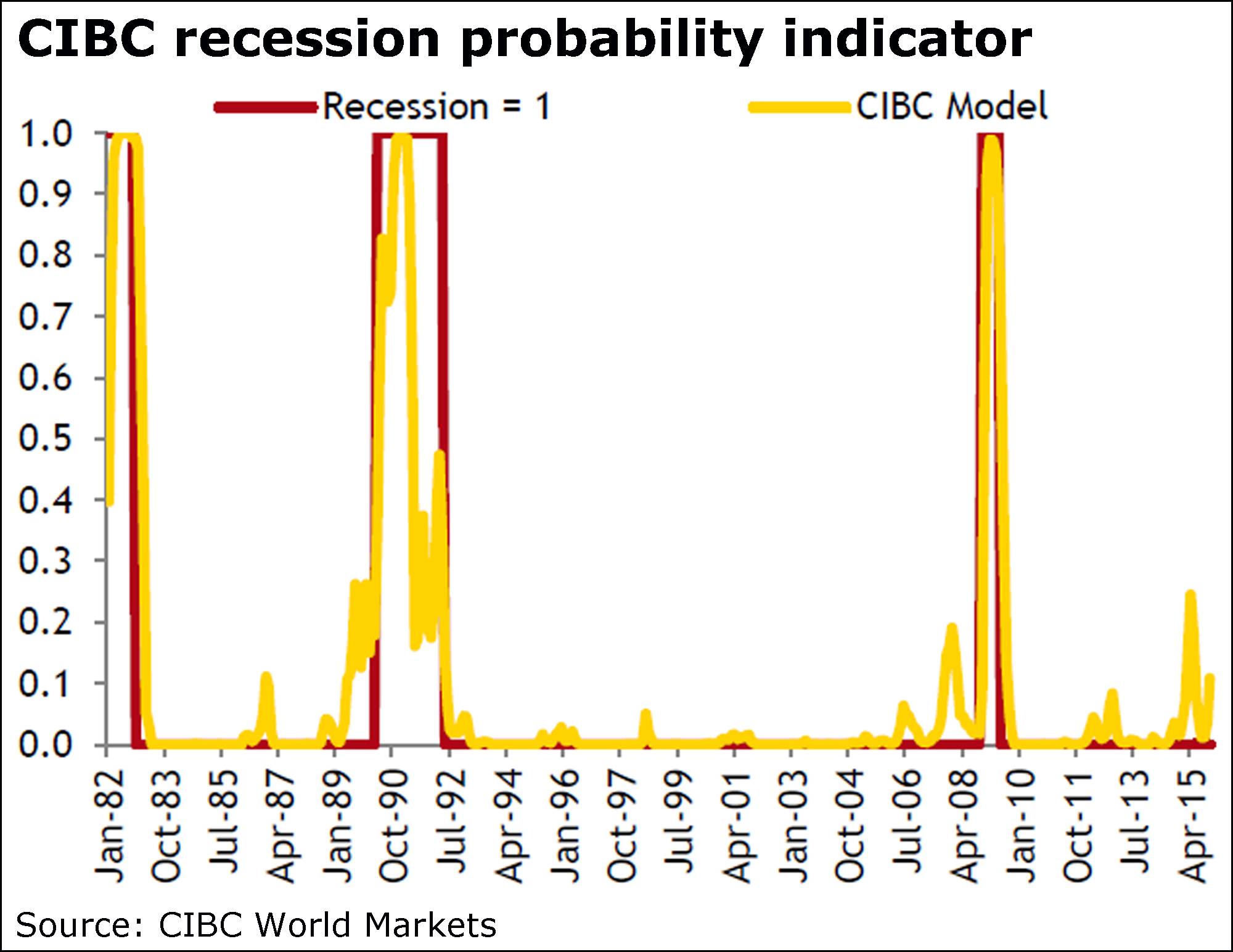 “Our CIBC CRPI sits at only 10 per cent, a level where we’ve been before without being in a full-blown national recession,” said chief economist Avery Shenfeld.

“Moreover, following November’s uptick in GDP, December featured a nice bounce in exports, even after stripping out the volatile aircraft category,” he added.

“But stay tuned as we update the model through the coming year, as we’re not yet through the resource sector slump.”