Canada now has a 70-cent dollar.

The loonie dipped under the 70-cent (U.S.) level, touching as low as 69.9 cents, having rallied earlier to as high as 70.5 cents. It was hovering at just above 70 cents by late afternoon.

The currency has been largely hit by oil prices, which dipped below $30 a barrel at one point today, the domestic economic outlook and the different timelines for interest rates in Canada and the United States.

The loonie is now at its lowest level since the spring of 2003. And it’s expected to go lower still before climbing again later this year, based on current forecasts for oil prices. Of course, analysts are now trimming those projections, as well.

Bank of America Merrill Lynch, for one, said it expects to see the loonie at just shy of 69 cents by the end of the first quarter.

“Amidst heightened geopolitical tension between Saudi Arabia and Iran - two staunch regional rivals - an intra-OPEC price war is likely to keep further pressure on oll,” Bank of America currency strategist Ian Gordon said in a report that dubbed the loonie “the perennial underperformer.”

“In our view, CAD’s correlation with oil will stay high or move higher, and with oil prices in the $25 to $35 a barrel range, Canadian oil sands projects need to justify keeping the pumps open,” he added.

In an interesting twist, Mr. Gordon said he believes the currency is nonetheless overvalued relative to prices on commodities, which mean so much to the Canadian economy.

“According to our commodity model which takes into account both energy and non-energy commodity prices, the Canadian dollar remains around 5-per-cent overvalued,” he said.

Currency traders, of course, focus on the other way of looking at the loonie and psychological impacts tend to come when the inverse hits a big round number.

But 70 cents (U.S.) will resonate among Canadian consumers.

When you go below that, said Scotiabank chief foreign exchange strategist Shaun Osborne, the realization of even higher costs for things such as imported fruits and vegetables, imported vehicles and that trip to the United States hits home.

The loonie, of course, has been buffeted time and again by the extreme gyrations in the oil market.

“Traders are still pushing oil prices around by as much as $3 within a matter of days just like when the price was $100 per barrel, but with prices now at $30 a barrel, what was a 3-per-cent move has become a 10-per-cent roller coaster,” said analyst Jasper Lawler of CMC Markets.

“We don’t have a recession. We don’t believe we will be in a recession. A recession is technically two consecutive negative quarters and we don’t have results from the second quarter ... We are still looking forward to renewed growth.”

“I’d like to start by saying I’m optimistic. The good news is we have a plan ... We do believe that these measures taken together will make an important difference on growth in this country and we believe that they will enable Canadian companies and organizations to be confident enough to invest.”

Mr. Morneau is suddenly sounding defensive, as Mr. Oliver did before him. And look how that turned out.

The economic gloom is mounting by the day as the price of oil plunges.

Just yesterday, as The Globe and Mail’s Barrie McKenna and Bill Curry report, a new Bank of Canada survey showed that the hiring and spending plans of companies across the country are the worst they’ve been since 2009.

Let’s flesh that out a bit by looking at the chart below. 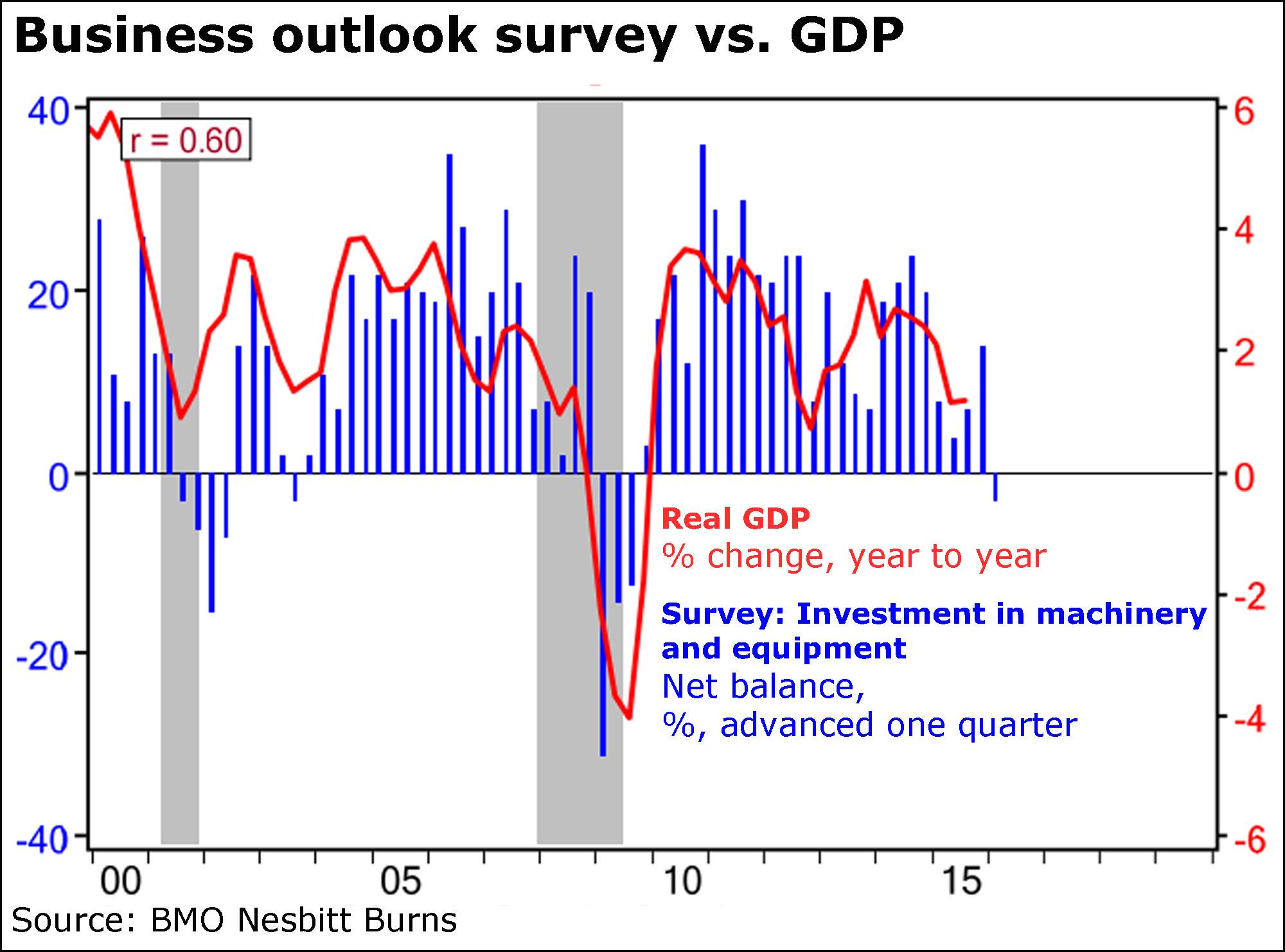 “In the BoC’s latest business outlook survey, a small majority of firms now plan on reducing investment in the coming year. That’s a rarity, outside of recession periods.”

Bank of America Merrill Lynch is also gloomy, so much so that it now expects the Bank of Canada to cut its benchmark rate again next week by one-quarter of a percentage point to just 0.25 per cent.

“Even a moderate 10-per-cent drop in energy production would cut GDP by 0.8 [of a percentage point],” said the bank’s North America economist, Emanuella Enenajor.

We know what the Liberals are planning, generally, but we don’t have the details, which would come in the next budget, whenever that might be.

We’re talking about words here. The Liberals have promised stimulus, while the Conservatives were more concerned with balancing the budget despite the gloom.

But Mr. Morneau might be wise to share his reasons for optimism sooner, lest a certain mentality set in.

He need not sound defensive given that he only just inherited this economic mess, and there’s nothing he can do about the price of oil.

But he need not offer platitudes, either. Any Joe can do that.

Lululemon updated its outlook ahead of an investor presentation today.

It now sees fourth-quarter revenue of between $690-million (U.S.) and $695-million, a hefty jump from a year earlier and better than its earlier forecast of up to $685-million.

Lululemon also projects fourth-quarter earnings per share of 78 cents to 80 cents, eclipsing the earlier prediction of up to 78 cents.