These are stories Report on Business is following Tuesday, Nov. 4, 2014.

Loonie sinks
The Canadian dollar is at its lowest level in more than five years today, hit by an oil price war sparked by Saudi Arabia and a "very dovish" Bank of Canada governor.

The loonie, as Canada's dollar coin is known, sank below 88 cents U.S., touching the lowest level since the summer of 2009, as crude prices tumbled again.

"I think what we have is really everything working against the Canadian dollar here," said chief currency strategist Camilla Sutton of Bank of Nova Scotia.

The loonie, which hit a low point of 87.51 cents at one point and sat at 87.64 cents by late afternoon, could falter even more given global and domestic developments.

The Canadian dollar has now lost more than 2 per cent over five trading days as blow follows blow.

"These developments include a disappointing GDP release last Friday, coupled with the collapse in oil prices and a dovish Governor Poloz, all of which have taken place in an environment of broad [U.S. dollar] strength," Ms. Sutton said.

"The near-term CAD outlook has deteriorated materially and the downward trend is too strong to fight," she added, referring to the Canadian currency by its symbol.

The collapse in oil prices, spurred on yesterday by Saudi Arabia's announcement of a cut in prices in the United States, diminishes the economic outlook for Canada, Ms. Sutton explained.

Add to that the fact that there's no bottom in sight.

As The Globe and Mail's Shawn McCarthy reports, there are now concerns that the world's major producers, which, of course, includes the Saudis, want to protect their market share, which could mean even lower prices.

This is rippling through global markets today.

"Oil prices are dropping fast again in European trading after Saudi Arabian Oil Co. stated yesterday that it will cut prices for all oil grades that is sells to the U.S., oil stocks in the U.K. including BP and Shell are trading lower which could see Exxon and Chevron under pressure in the U.S.," said analyst Jasper Lawler of CMC Markets in London.

Feeding into the erosion of the loonie were yesterday's comments from Bank of Canada Governor Stephen Poloz, which again suggested interest rates are on hold at rock-bottom levels for some time yet.

Which, of course, means the Canadian central bank will lag its U.S. counterpart, the Federal Reserve, in eventually hiking.

As The Globe and Mail's David Parkinson writes, Mr. Poloz defended his low-rate policy, which he said is key to bolstering Canada's economy in the post-crisis era.

Visa, MasterCard in voluntary deal
Visa Canada Corp. and MasterCard Inc. have agreed to reduce their credit card fees over the next five years, meaning lower costs for stores and, possibly, shoppers, The Globe and Mail's Jacqueline Nelson reports.

The two credit card giants, which represent about 90 per cent of the market in Canada, made separate, voluntary proposals to cut so-called interchange fees down to an average rate of 1.5 per cent through 2019. Interchange fees represent the charge to the merchant each time a card is swiped to purchase goods or services.

"In total, the two commitments represent a reduction in credit card fees of approximately 10 per cent," Mr. Oliver said in a statement Tuesday, adding that lower costs for merchants "should ultimately result in lower prices for consumers."

Scotiabank unveils restructuring
Bank of Nova Scotia kicked off its new fiscal year with a restructuring to slash jobs and branches, take additional loan-loss provisions, and cost the group $451-million in charges.

The bank, whose fiscal year began Nov. 1, said today it will eliminate 1,500 positions, two-thirds of them in Canada, and close or scale bank 130 branches outside the country.

This will allow Scotiabank to focus on high-growth markets such as Chile and Colombia, The Globe and Mail's Tim Kiladze reports.

"Today's announcement is a result of making some difficult but necessary decisions to support our long-term goals," said chief executive officer Brian Porter.

"We are confident that these initiatives will allow us to continue investing in high-growth areas of the bank," he added in a statement.

"Notwithstanding these unusual charges, we remain confident that our 2014 reported results will be within our financial objectives for the full year."

Ottawa, Beijing strike deal
The Canadian and Chinese governments have struck a deal that would see Canada designated as a trading hub for ‎the renminbi, The Globe and Mail's Steven Chase reports today.

The hub would probably be based in Toronto.

There are still details to be worked out but sources said it's expected to be announced during Prime Minister Stephen Harper's trip to China that begins this week.

‎This hub would mean a great deal particularly to small or medium-sized businesses looking for competitive advantages in doing business with China.

Canada swings to trade surplus
Chalk one up for the country's exporters.

Canadian exports rose 1.1 per cent in September, while imports slipped by 1.5 per cent, pushing the country's trade balance to a surplus of $710-million from a deficit of $463-million in August.

On the import side of the ledger, both volumes and prices slipped, the former by 1 per cent and the latter by 0.6 per cent, Statistics Canada said today.

The story was different for exports, though, as volumes rose 1.6 per cent and prices fell 0.4 per cent.

Exports of autos and parts, and to a lesser extent other consumer goods, drove the gains, The Globe and Mail's David Parkinson reports.

"Though the loonie has certainly been feeling the pain from the battering oil prices have been taking, Canadian energy exports are still able to support the nation's trade position," said Nick Exarhos of CIBC World Markets, noting the 0.6-per-cent move in energy exports in September.

EC cuts forecasts
We already knew that Europe is in the doldrums.

Today brings news that it's going to get worse.

The European Commission has cut its outlook for its economies, adding pressure to the European Central Bank as it heads into its key meeting this week.

As our European correspondent Eric Reguly reports, the EC projected today that the economies of the euro zone will grow next year by just 1.1 per cent, down from its earlier forecast of 1.7 per cent.

Germany, the economic hope of the region, is now forecast to eke out an expansion of 1.1 per cent, compared to an earlier projection of 2 per cent, while France has been downgraded to 0.7 per cent from 1.5 per cent.

The euro zone is already struggling amid low inflation, at 0.4 per cent, and high unemployment of 11.5 per cent.

"The new European Commission projections for growth and inflation would suggest that the upside in the inflation reading is not expected to be too great, despite the ECB's efforts, after it today announced that it sees inflation remaining below the 2-per-cent target until at least 2016," said Alpari's Mr. Erlam.

"This could encourage the ECB to do more, although I remain doubtful that we'll see [quantitative easing]," he added, referring to the asset-buying stimulus program that the Fed has just ended and which some observers think its European counterpart could launch.

"Growth forecasts were also revised lower but this can't come as a surprise to anyone given all of the data we've seen over the last six months."

WestJet profit slips
WestJet Airlines Ltd. is in today with a lower profit as Canadian companies pick up the pace of quarterly reports.

But on an adjusted basis, profit climbed to $85.4-million or 66 cents.

Revenue also rose, to more than $1-billion from just shy of $925-million.

Talisman Energy Inc. also posted results today, swinging to a profit of $425-million, or 41 cents, from a loss of $54-million or a nickel. Its shares plunged. 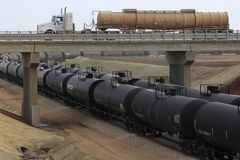 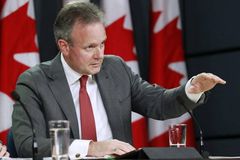 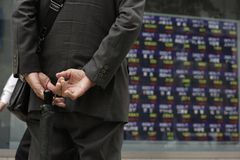