These are stories Report on Business is following Wednesday, March 11, 2015.

The Gospel According to John
Here's a stat that so perfectly highlights gender inequality in the corporate world: The number of chief executive officers named John outnumber all women in S&P 1500 companies.

According to a recent study published in The New York Times, CEOs named John accounted for 5.3 per cent, followed by chiefs named David, at 4.5 per cent.

The report, written by Justin Wolfers, a high-profile economics prof in the United States, looks at it another way, as well, via a "Glass Ceiling Index" that finds that "for each woman, there are four men named John, Robert, William or James."

This index, Mr. Wolfer writes, was "inspired" by an Ernst & Young study that showed gender diversity inching up only slowly on corporate boards of directors.

"Indeed, the proportion of women on boards has increased only 5 percentage points over the last 10 years," that Ernst & Young report says.

"Only 16 per cent of S&P 1500 board seats are held by women – less than the proportion of seats held by directors named John, Robert, James and Williams."

Another study, by the way, showed the United States and Canada well down a list for women on boards.

And separately today, Bloomberg reported that women account for just 1.5 per cent of board members in Japan, despite the efforts of Prime Minister Shinzo Abe to boost their representation.

All of these findings underscore the ongoing work of The Globe and Mail's Janet McFarland, who most recently reported that Canadian companies have been slow to announce their new board policies in the face of new rules on reporting gender diversity.

Paris in the springtime
It's all about currencies across global markets.

The euro is sinking ever lower toward parity with the U.S. greenback, while the Canadian dollar is stuck below 79 cents (U.S.) this morning.

As our European bureau chief Eric Reguly reports, the euro fell to a 12-year low today.

"Every man and his dog is long equities and long the U.S. dollar at this point in a massively overcrowded trade of not fighting the Fed (and ECB and all the other central banks who have cut rates this year)," said analyst Jasper Lawler of CMC Markets in London, referring to the Federal Reserve and European Central Bank.

"The result is an ongoing source of volatility in [foreign exchange], dollar-denominated commodities and commodity-heavy stock indices."

This is playing out in equity markets as well, as The Globe and Mail's Luke Kawa writes.

Stocks took it on the chin yesterday, but today is shaping up to be better.

Tokyo's Nikkei gained 0.3 per cent, European stocks are up, and New York is poised for a stronger open.

S&P 500 and Dow Jones industrial average futures were also up.

"Currency markets continue to cause havoc with the equity markets, as the relentless strength of the dollar continues to raise the spectre of U.S. corporates struggling under the 'currency headwinds' ailment that many European companies have complained about for some time," IG market analyst Alastair McCaig said of the overall mood.

If you happen to be planning a spring vacation, by the way, Paris is lovely this time of year. And the Canadian dollar sure looks better against the euro than it does against the greenback.

Indeed, noted chief economist Douglas Porter of BMO Nesbitt Burns, the Canadian dollar has gained about 13 per cent against the euro in the last year.

"But if oil prices recover even slightly, it could be doable in 2016."

Shattering the glass ceiling in the Canadian automotive industry
May 12, 2018 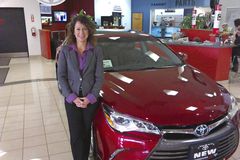 Canada third in ranking of female executives in financial services
May 12, 2018 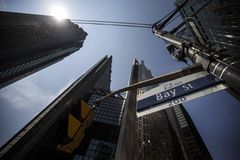