The Canadian dollar tumbled by more than a penny from its open today after the Bank of Canada cut its key rate and painted a picture of a troubled, oil-shocked economy.

“The perfect storm for the loonie has arrived - the Bank of Canada, weak oil, sluggish domestic growth, and an upcoming election,” Rahim Madhavji, president of Knightsbridge Foreign Exchange, said in a report titled “Bank of Canada cuts rate, guts loonie.”

“The Canadian dollar has reacted violently to the news - a rate cut means flows of funds out of Canada as yields are now lower in Canada,” he added.

“With expectations that the Fed will raise rates sometime in 2015, the U.S. dollar uptrend will continue.”

As The Globe and Mail’s Barrie McKenna reports, Bank of Canada Governor Stephen Poloz and his colleagues cut their benchmark overnight rate by one-quarter of a percentage point to just 0.5 per cent.

The central bank also cut its estimate of how the economy has fared amid the oil shock and softer-than-expected exports.

“The downward revision reflects further downgrades of business investment plans in the energy sector, as well as weaker-than-expected exports of non-energy commodities and non-commodities,” the central bank said in its statement.

“Real GDP is now projected to have contracted modestly in the first half of the year, resulting in higher excess capacity and additional downward pressure on inflation.”

The Bank of Canada did say it expects a pickup in the third quarter, and then again in the last three months of the year.

But for the year as a whole, the central bank now sees the economy expanding by just slightly above 1 per cent, though that should perk up to 2.5 per cent in 2016.

You can expect the loonie to sink further still, particularly when the Federal Reserve hikes rates later this year.

Like many other central banks around the world, the Bank of Canada has been on a much different path than that of the Fed, whose chair Janet Yellen signalled again today that she’s poised for a rate hike.

Mr. Poloz is still hoping for a rebound in non-energy exports, which are supposed to be helped along by the lower dollar.

“The clue is in the bank’s optimism for a shift in the drivers of growth towards exports, and the analysis it presents showing that exchange-rate sensitive sectors have already been outperforming,” Avery Shenfeld, chief economist at CIBC World Markets, said of the rate cut.

“Pushing Canadian short rates below where the Fed is likely to be at year-end is having the desired effect on the Canadian dollar,” he added.

“But there’s a long lag in getting the full benefit of the currency move in terms of waiting for a shift in plant location decisions in Canada’s favour, so monetary policy will have to be easy enough in coming years to allow the recent loonie trading range to become the norm.”

This is the second cut by the Bank of Canada this year after it surprised the markets in January. 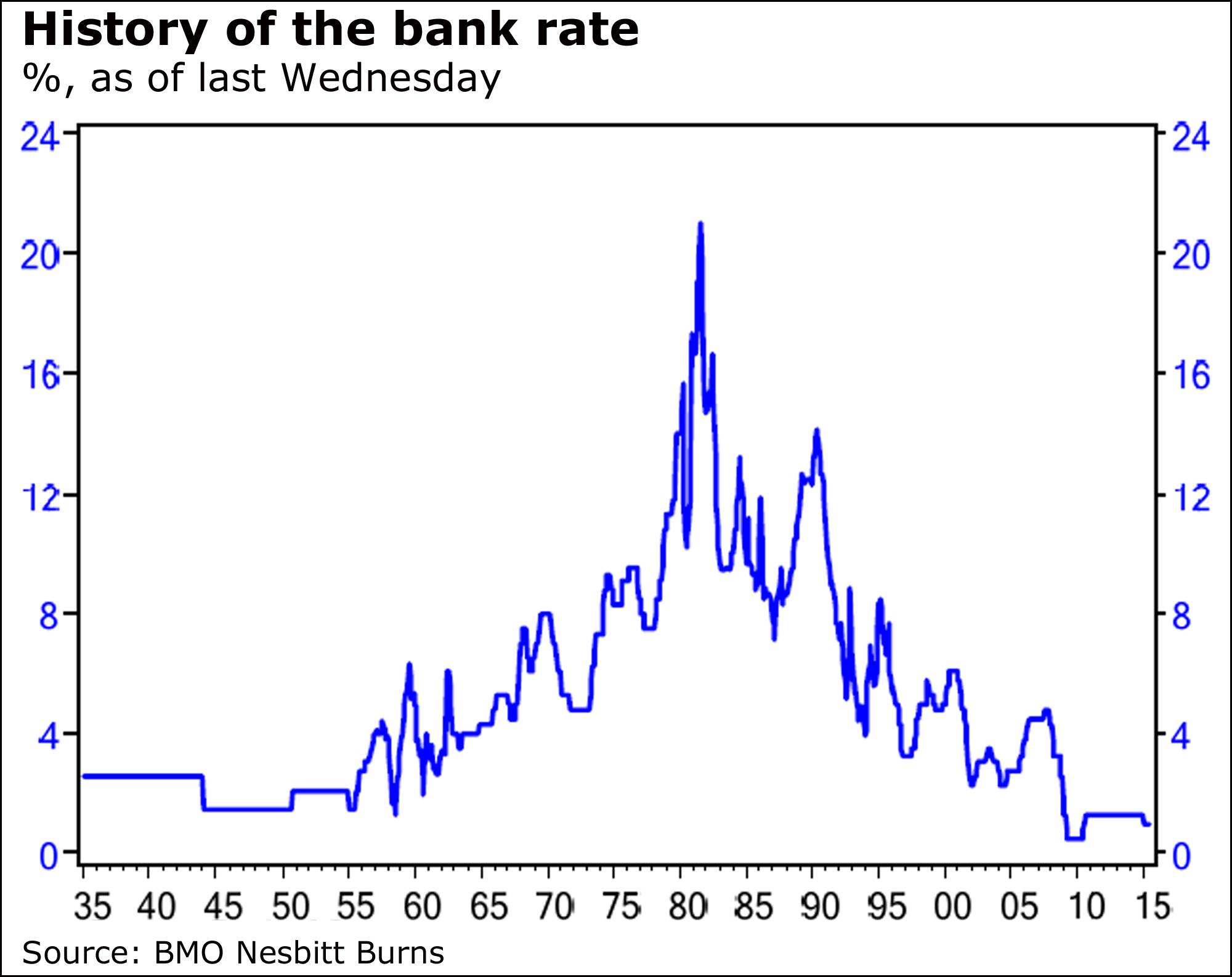 Some history, provided today by Bank of Montreal’s chief economist.

The chart above looks at the bank rate, which is one-quarter of a percentage point above the benchmark overnight rate and, as Douglas Porter noted, the only rate with such a long timeline.

It now stands at 0.75 per cent, though this chart reflects where it was before today's cut.

The rate goes back to the formation of the Bank of Canada.

And that peak cited by Mr. Porter drove unemployment up sharply and rates to levels where some people simply walked away from their homes.

Greece’s parliament is debating what voters have already decided, and the deputy finance minister has just quit in protest.

As our European bureau chief Eric Reguly reports, politicians began the debate over a proposed bailout deal this morning.

Several members of the ruling Syriza party, which swept to power vowing to fight the harsh demands of the euro zone, are opposed to the deal, which is actually harsher than the one voters defeated in a referendum.

“We are heading into another politically tense day in Greece,” said Ipek Ozkardeskaya of London Capital Group.

This comes, too, as the International Monetary Fund, raises troubling questions about the proposal, raising questions over whether it will, in the end, support it.

“Almost nothing has been straightforward in this Greek drama, but [Prime Minister Alexis] Tsipras’ admission that he signed a text he doesn’t believe in is sure to rile locals fresh from a referendum that categorically voted against any such action,” said market analyst Alastair McCaig of IG in London.

“Throw into the mix the leaked memo from the IMF stating that Greek debt can only be sustained with far greater relief measures than Europe is willing to consider and you have the perfect ingredients for chaos and confusion,” he added in a research note.

“Regardless of how the voting goes in the Greek parliament, it’s humanitarian relief that the country will need imminently.”

As always, you want to take Vancouver and Toronto out of the mix to get a picture of the rest of Canada’s housing market.

Home sales slipped 0.8 per cent in June from May, the Canadian Real Estate Association said today, but rose by 11 per cent on an annual basis.

Compared to a year earlier, average prices surged 9.6 per cent, while the MLS home price index, which is deemed a better measure, climbed 5.4 per cent.

But if you exclude the Vancouver and Toronto areas, the group said, average prices rose just 3.1 per cent.

“Those records would be even higher were it not for an ongoing shortage of listings for single-family homes in the area,” he added.

“The combination of strong demand and a shortage of listings is continuing to fuel single-family home price increases.”

Canada’s manufacturers scored a month of slightly higher sales in May, though lower volumes.

Shipments were up in only six of the 21 industries measured, or almost half of the sector.

Inventories slipped 0.5 per cent, while the inventory-to-sales ratio dropped a tiny bit to 1.44.

“The trend in real manufacturing continues to be down from levels reached halfway through last year, meaning that we’ll need more time for a more competitive exchange rate and a stronger trading partner to the south to influence the desired rotation away from the consumer and housing,” said Nick Exarhos of CIBC World Markets.

Well, that wasn't so bad

The economy expanded in the second quarter by 7 per cent, compared to a year earlier, above the 6.8 per cent projected by economists and buoyed by what were then strong stock markets.

Observers again raised their eyebrows over the data, with Capital Economics suggesting growth is “almost certainly” slower to the tune of one or two percentage points.

“Looking ahead, the support to growth from the financial sector is unlikely to last - current levels of growth in stock market turnover (over 500 per cent year-over-year in Q2) can’t be sustained for much longer, even if equity prices recover,” said Julian Evans-Pritchard of Capital Economics, projecting growth this year of 7 per cent.

“More broadly, with the drag from the structural slowdown in property and heavy industry now easing, we think that growth is on track to slow only gradually over the course of the next few years,” he added.

This, too, shall pass

You might get more than just a tummy ache if you try to eat the evidence in an insider trading case.

The Brooklyn mortgage broker has just settled a civil case with the Securities and Exchange Commission, having already pleaded guilty to criminal charges of insider trading in what the U.S. regulator said was a $5.6-million (U.S.) case.

A former stockbroker and law firm clerk were also charged in the alleged scheme.

What’s fascinating about the case, of course, is the way Mr. Tamayo is alleged to have passed tips on serviettes or Post-It notes in Grand Central Terminal.

(Given that he then ate them, they presumably, um, passed one more time.)

According to the SEC announcement, Mr. Tamayo was a middleman who received “material, nonpublic information” from a friend at a law firm who, in turn, was getting details of pending corporate deals from the law firm’s computers.

“The SEC alleged that after receiving the tips from the law firm clerk, Tamayo typically met the stockbroker near the clock at the information booth at Grand Central and chewed up or ate post-it notes or napkins after using them to show the stockbroker the ticker symbol of the company that would be acquired,” the regulator said.

“The stockbroker then traded for himself, Tamayo, and other customers.”

Under the settlement, Mr. Tamayo won’t be fined, though he will have to give up more than $1-million of his “ill-gotten gains” already subject to seizure or restitution in the criminal probe, because he has co-operated extensively with the SEC.

He also must continue as a witness in the ongoing case against the law firm clerk and stockbroker.

Canadian sales in cubic metres of refined petroleum products in April, up 2.8 per cent from a year earlier: Statistics Canada.

Video: Your phone is distracting you