It’s suddenly a lot more expensive to be a vegetarian, even moreso if you live in certain parts of Canada.

The reason, of course, is that this is a key time of year for imported fruits and vegetables, which cost more because of the low Canadian dollar.

But the surge in costs is particularly harsh in some provinces, notably British Columbia, according to the latest report from Statistics Canada.

As The Globe and Mail’s David Parkinson writes, the annual inflation rate jumped in January to 2 per cent, driven up partly by a 4-per-cent rise in food prices. 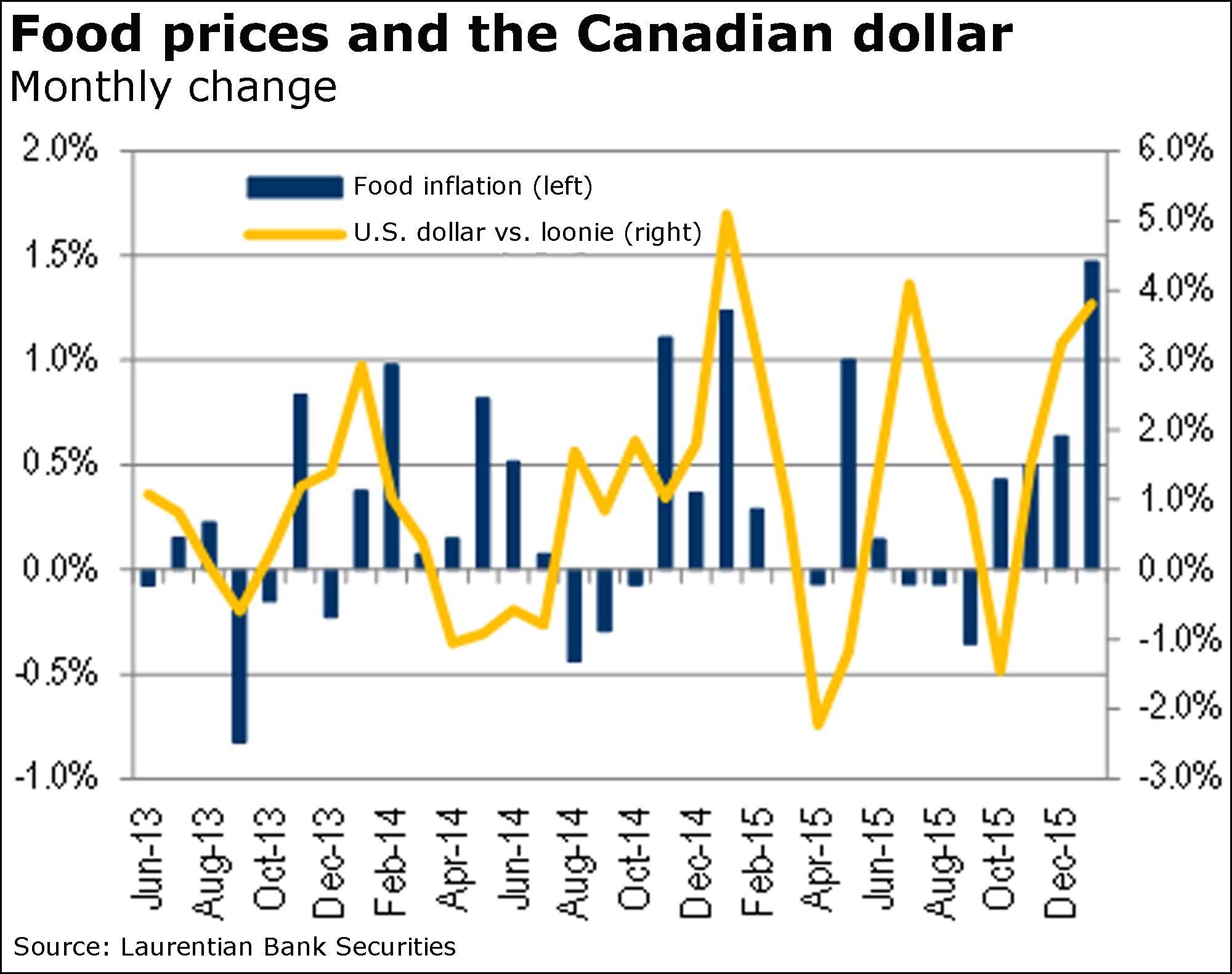 But that last number masks the surge in some products, particularly fresh vegetables, which soared 18.2 per cent from a year earlier.

One part of the measure, which takes in cauliflower, broccoli and celery, rose almost 23 per cent.

(The cost of canned veggies fell 1 per cent, but obviously they simply won’t do.)

“Prices of fruits and vegetables, imported for the most part at this time of the year, soared for a fourth consecutive month in January, reflecting the 9-per-cent cumulative depreciation observed in the Canadian dollar since October,” said economist Dominique Lapointe of Laurentian Bank Securities.

“For example, the 4.8-per-cent month-over-month increase in fruit prices is the second-largest monthly gain in more than 15 years.

Vegetarians in British Columbia and Saskatchewan should be particularly concerned, given the surge of more than 26 per cent and 31 per cent, respectively, in fresh vegetable prices, marking the steepest rise in the country.

Those in Newfoundland and Labrador had it much easier, at a 4.7-per-cent increase, for the lowest in Canada.

Stocks are on the upswing around the world this morning while so-called Brexit fears are playing out in the currency markets.

But the British pound is taking it on the chin, tumbling over the latest developments in Brexit, which refers to the possibility of the U.K. leaving the European Union.

Prime Minister David Cameron struck a deal with his EU counterparts last week, reforms that would keep Britain in the EU.

But on the weekend, London Mayor Boris Johnson said he’ll campaign against that agreement.

“So far, the London stock market is showing little concern about the Brexit debt, although as ever with such things, the [foreign exchange] market is already moving in response to the weekend’s many developments,” said IG senior market analyst Chris Beauchamp.

“The pound is down to four-week lows against the U.S. dollar, while against the yen it is looking to breach the lows of February, as the market decides that the U.K. currency is hardly the ideal place to be for the time being,” he added.

“Given that we have many weeks of this ahead of us, such falls in the pound are either a monumental value opportunity (if you think the gloomy case is excessive) or a chance to ride the speculative wave lower.”

Smartwatches have overtaken Swiss watches for the first time, according to Strategy Analytics, chalking up global shipments of 8.1 million units in the fourth quarter.

Swiss watches weren’t that far behind, with shipments of 7.9 million, but dropped in the quarter while smartwatch shipments surged, the research group’s findings showed.

“The Swiss watch industry has been very slow to react to the development of smartwatches,” Strategy Analytics executive director Neil Mawston said in a report.

“The Swiss watch industry has been sticking its head in the sand and hoping smartwatches will go away.”

Traditional Swiss brands represented just 1 per cent of smartwatches in the quarter, he noted, and are a “long way” behind the Apples and Samsungs of the world.

In fact, Apple and Samsung together represent eight in 10 of all shipments, Strategy Analytics director Cliff Raskind added.

The fast-growing markets for smartwatches include North America, Western Europe and Asia, he said.

In its latest report, the Swiss industry cited the decline in January exports of 7.9 per cent from a year earlier.

“An unfavourable environment continues to hold back results in the sector,” the Federation of the Swiss Watch Industry said.

The two biggest markets, Hong Kong and the United States, drove the overall decline measured in currency rather than volume, while shipments to Japan, Germany and Britain rose.

Exports to Hong Kong, the biggest market at 13.5 per cent of the total, plunged by about 33 per cent, with January marking the 12th month in a row of “steep decline,” according to the group.

For the United States, it was the fifth month of decline.

Having said that, exports to Japan surged almost 36 per cent, though that country accounts for just 6.6 per cent of exports.