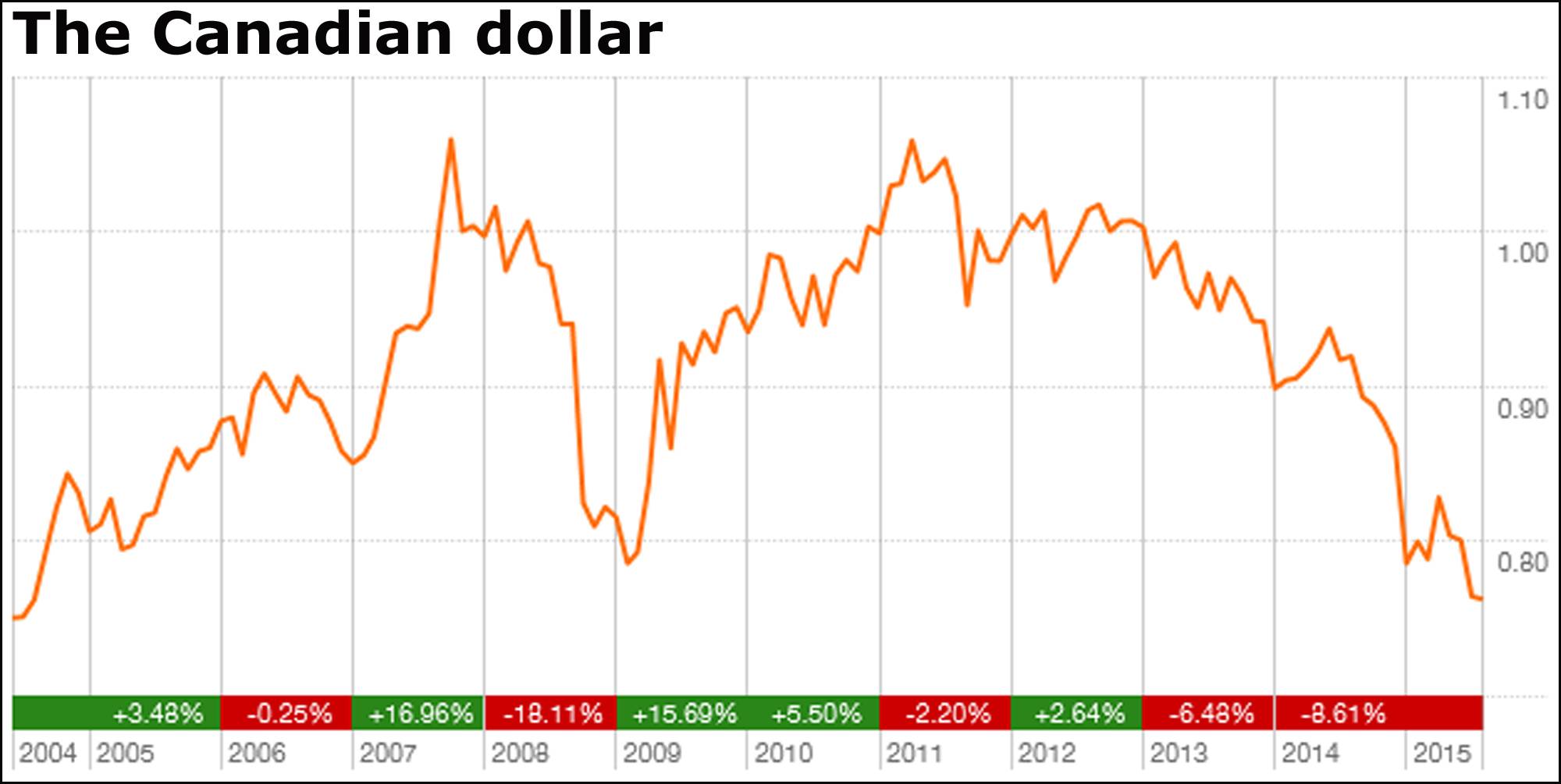 The Canadian dollar is under attack on several fronts, from the collapse in oil prices to the different paths being taken by central banks.

The loonie lost about 4 per cent in July, sank to below 76 cents U.S. at one point yesterday and again today, and won’t stop there, according to analysts who expect it to tumble further to about 73 or 74 cents.

The currency has been as low as 75.77 cents and as high as 76.30 cents today, trading below the 76-cent mark by late afternoon.

Here, then, are the five stages of grief for such an agonizing death:

The loonie has enjoyed its ups and suffered its downs, as have other commodity-linked currencies, since the collapse in oil prices began a year ago.

When the oil shock began, no one knew when prices would find their bottom, though some observers believed the currency would at least see a short-lived bounce back to about 85 cents.

“Within the global oil markets, oversupply has persisted as OPEC continues to produce above its target and U.S. shale output has yet to slow,” Toronto-Dominion Bank economists Leslie Preston and Brian DePratto said in a recent report, projecting the loonie will slip to 73 cents by the second quarter of next year.

“The sustained lower price environment is required to reduce investment in the sector further, eventually leading to the production declines necessary to work down the supply glut,” they added.

“This is also expected to sow the seeds of higher oil prices later in 2016.”

The lower loonie is supposed to be a boon to Canada’s beleaguered manufacturing export sector.

The Bank of Canada’s counting on that, and economists see some signs of it.

But at last count, in May, Canada’s trade deficit was a swollen $3.3-billion. 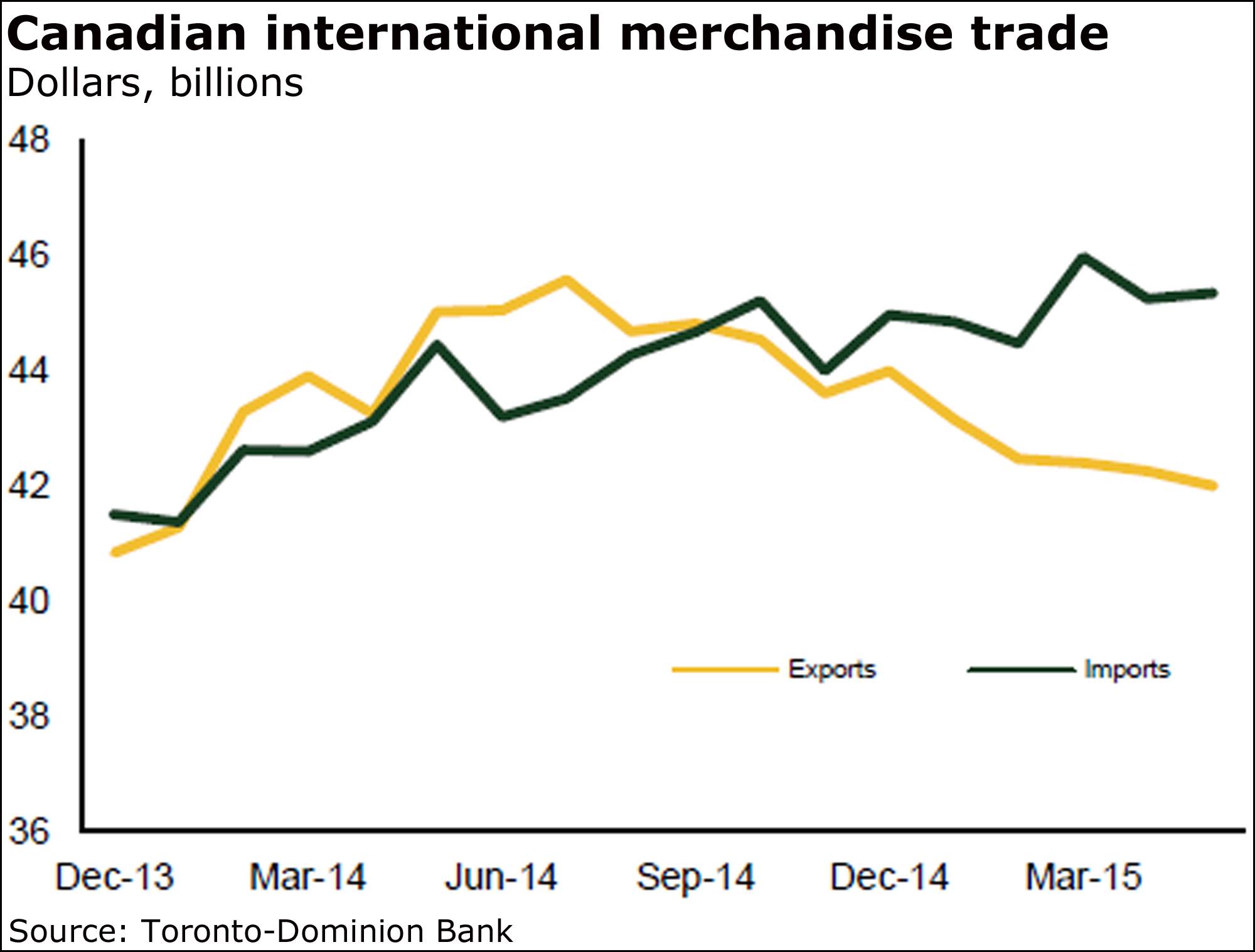 “A more competitive exchange rate should indeed lift export volumes in the quarters ahead,” said economists at CIBC World Markets.

“But we aren’t going to see all of those benefits just yet.”

Well, we can always take out our anger on the Americans by refusing to vacation on Cape Cod. 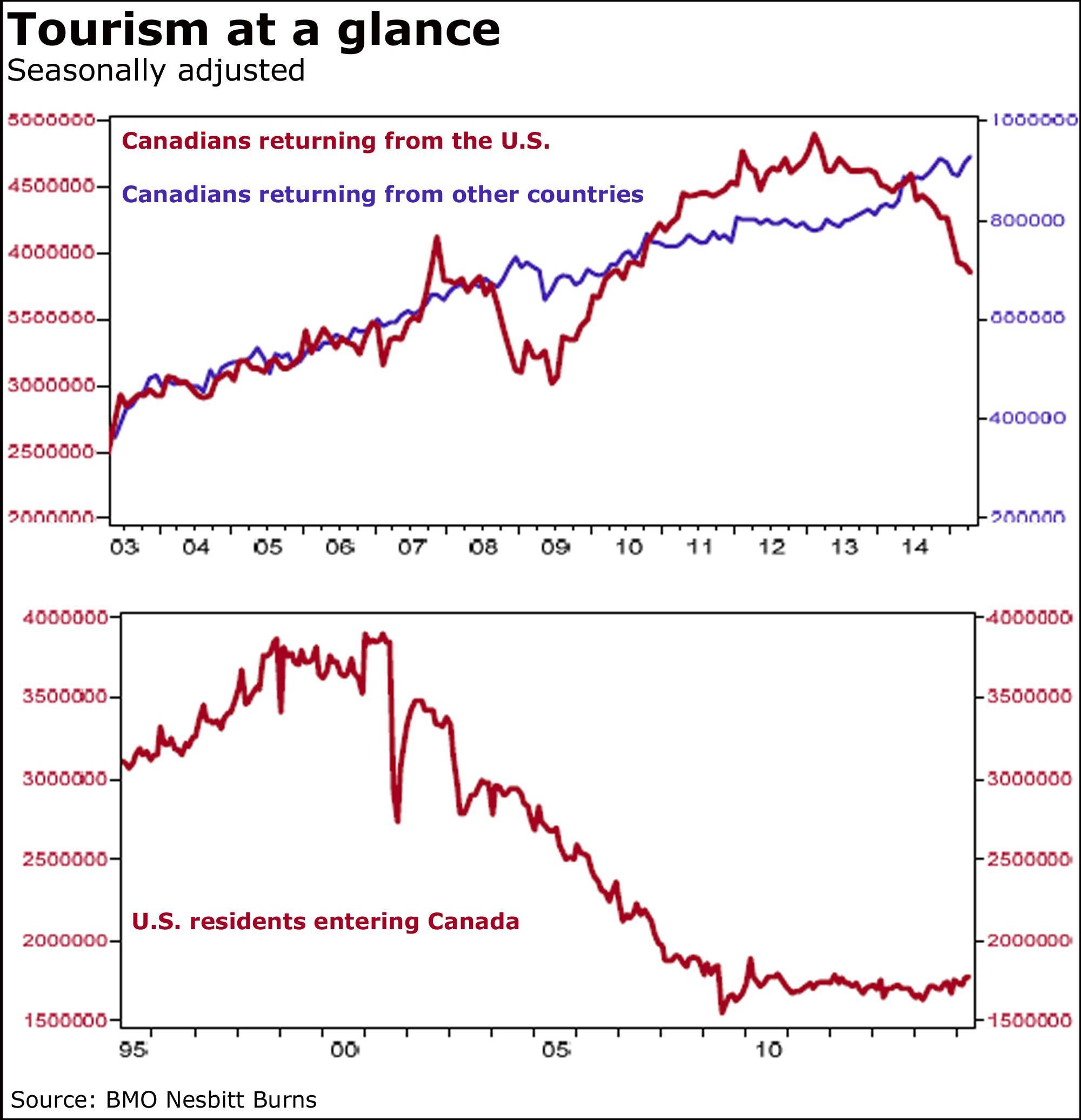 When you’ve lost almost 25 per cent of your buying power in the U.S., a summer trip to Charlottetown sure looks better than Chicago.

Ah, if only central banks negotiated their timelines.

The divergence between the Bank of Canada and the Federal Reserve is another big factor behind the rout in the loonie.

The U.S. central bank is heading toward its first rate hike, possibly next month, while Bank of Canada Governor Stephen Poloz and his colleagues have cut their benchmark rate twice this year.

The overnight rate now stands and 0.5 per cent, and some observers, though not all, believe a third cut could be possible depending on the outlook. 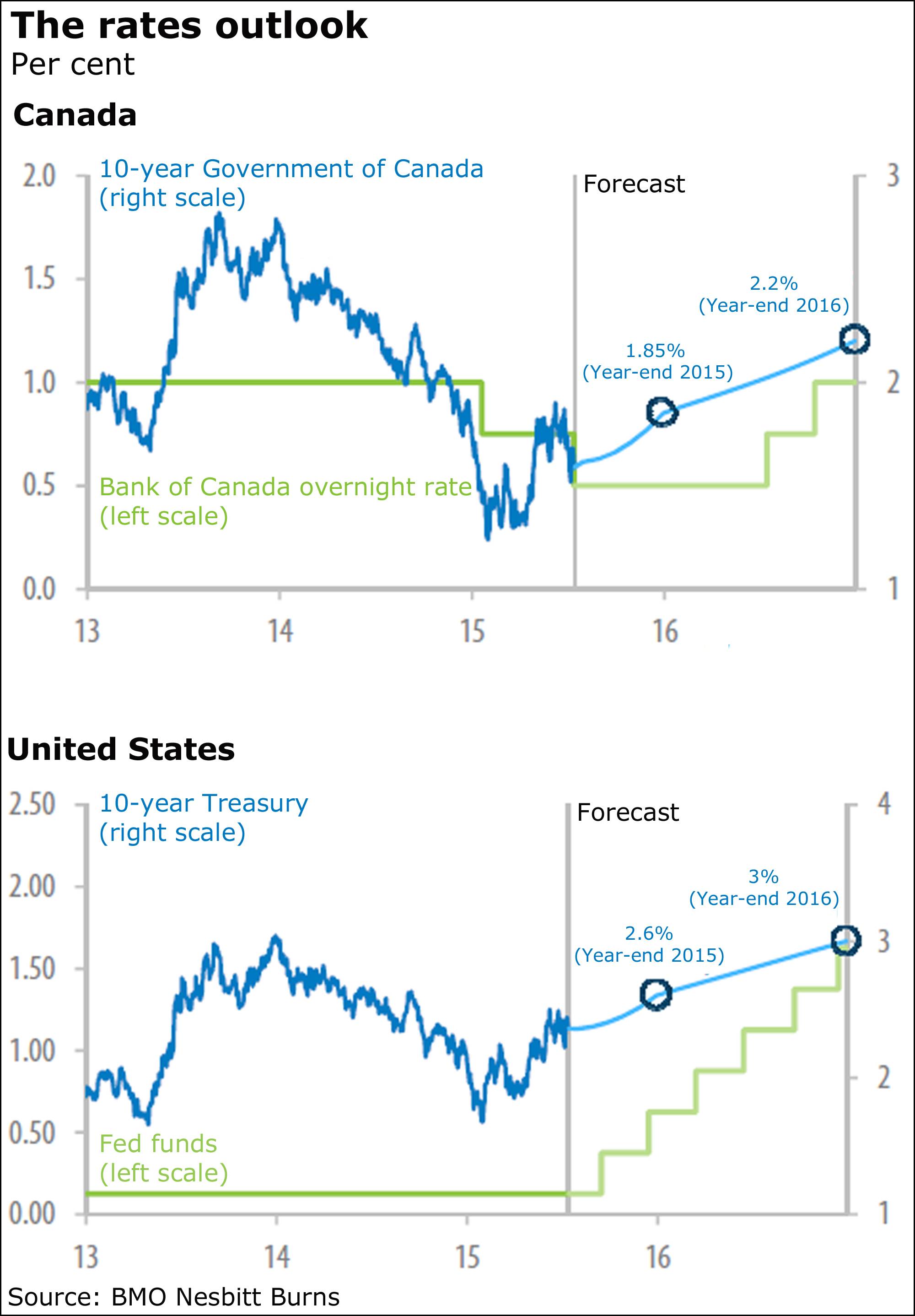 “In cutting rates in July, BoC Governor Poloz sounded less confident that the economy could re-balance through an expansion in non-oil exports and noted that the BoC still had a fair bit of room to manoeuvre on policy if downside risks to the economy started to materialize,” Paul Meggyesi, managing director of global foreign exchange strategy at JPMorgan Chase & Co., said in a recent report.

“The CAD curve certainly prices the risk of easing but with only 10 basis points discounted for this year there’s still some way for rate expectations to adjust should oil not find a floor soon,” Mr. Meggyesi added, citing the loonie by its symbol.

“A 25-basis-point rate cut this year would likely boost USD/CAD by another 2 to 3 cents,” he said, referring to the U.S. dollar versus the loonie.

Given that Mr. Poloz would like to see a loonie-related export boost, I’m sure he’d love to negotiate with Fed chair Janet Yellen to go for it sooner rather than later.

And not a real one, just a technical one.

Canada’s economic performance, and what that could mean for monetary policy, is also weighing on the currency.

Gross domestic product contracted at an annual pace of 0.6 per cent in the first quarter, and the Bank of Canada expects further shrinkage of 0.5 per cent in the second quarter. 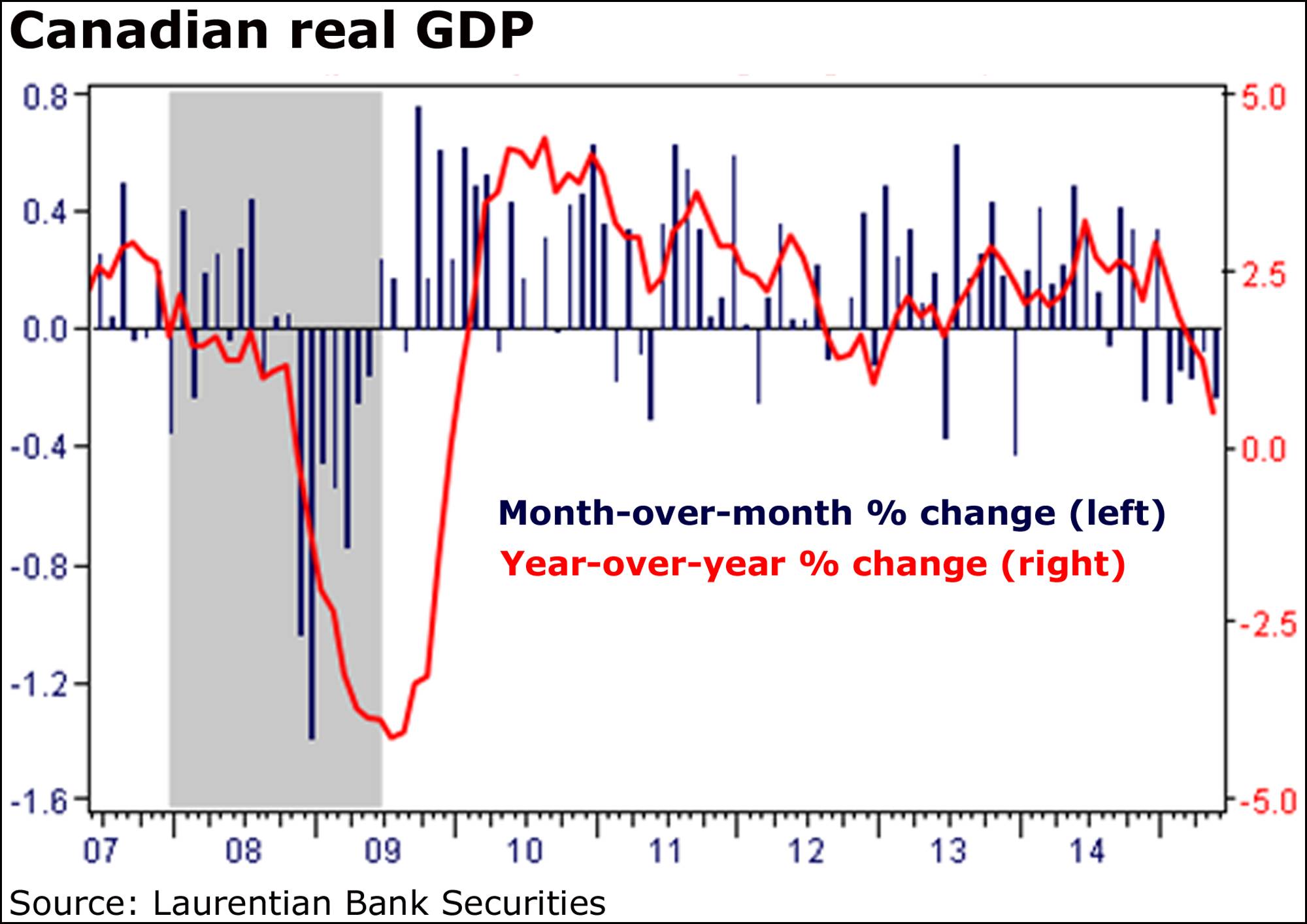 The central bank expects a pickup in the second half of this year, as do several economists.

“However, the severe drop in the businesses’ confidence index for the month of July, published [Thursday] by the [Canadian Federation of Independent Business], raises some doubts about the BoC’s scenario of a solid rebound in real GDP for the second half of 2015,” warned Sébastien Lavoie, assistant chief economist at Laurentian Bank Securities.

“Also, oil companies have announced another round of capex and jobs cuts [last] week,” he added.

“Finally, the residential construction and real estate services are unlikely to provide tailwinds to growth going forward since the higher level of unabsorbed inventories (new supply) should lead to a reduction in homebuilding activity.”

Even speculators betting on a rebound are throwing in the towel.

According to the latest report from the U.S. Commodity Futures Trading Commission, the net short position against the loonie had widened by almost $1-billion (U.S.) to $4.3-billion by last Tuesday.

That was deeper than short positions for the Australian dollar, Mexican peso, British pound, New Zealand dollar and Swiss franc, though trailed the euro and the yen. 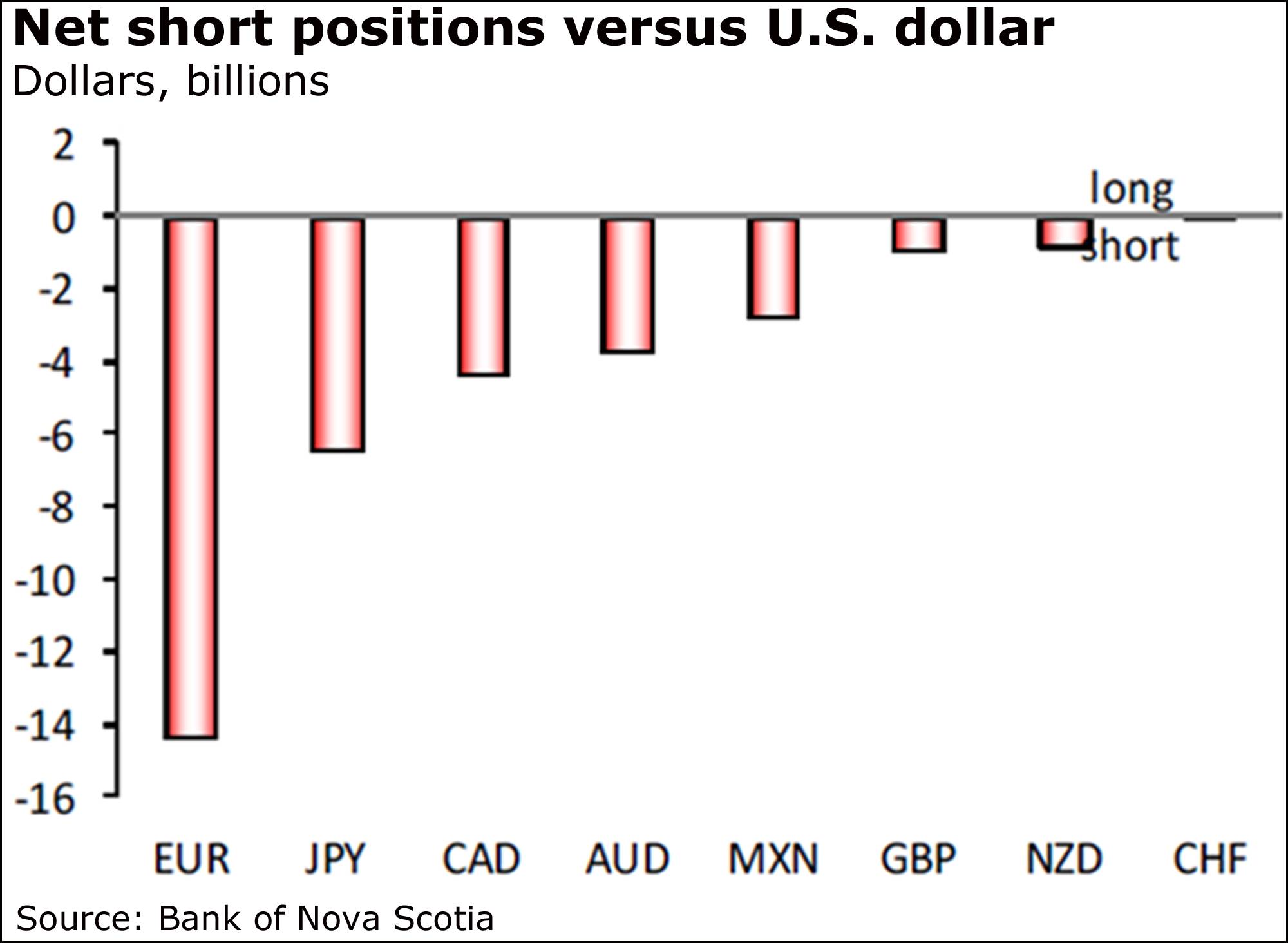 “The details are weak, showing an apparent capitulation on the part of CAD bulls whose position had built for four consecutive weeks prior to [last] week’s decline,” Bank of Nova Scotia currency strategist Eric Theoret said of the weekly CFTC report.

“CAD bears have also built their short positions steadily since late May, suggesting a rising expectation for continued currency weakness.”

“With a view to final trimester Fed tightening this year, unmatched by the BoC, we look for the currency to continue to depreciate, averaging C$1.33 in October [meaning about 75 cents]. Political uncertainty heading into the Oct. 19 federal election and continued global oil price volatility (but along a sideways trend) should reinforce the weakening trend. Presuming the absence of post-election policy uncertainty and more oil prices, we look for the loonie to average a cent or so stronger by 2015-end.”

“Whether the economy goes up or down, people are still going to get a colonoscopy.”Jason Donville, Donville Kent Asset Management

Shire PLC is going after Baxalta Inc., proposing a $30-billion (U.S.) deal that would mark yet another takeover in the pharmaceutical industry.

Shire said today it proposed an all-stock deal last month that values Baxalta at $45.23 a share.

Shire also released a letter to the U.S. company’s chief executive officer saying that his “lack of engagement has been surprising.”

Which means that Baxalta said no, and Shire’s now going public.

A movie poster I'd love to see

Trouble in China is weighing on two auto makers today.

Both Toyota Motor Corp. and BMW AG cited China as a trouble spot, the latter warning investors that it may have to trim its profit targets.

“For some time now, we have been drawing attention to the normalization of the Chinese automobile market,” BMW chief financial office Friedrich Eichiner said as the company unveiled its financial results.

Toyota is gaining on sales in China, but, as Reuters reported, managing officer Tetsuya Otake said today that “we can’t be optimistic.”

What better fodder to get a federal election campaign up and running than the economy and jobs?

You could say Statistics Canada got the jump, setting up the weekend election kick-off with Friday’s report showing the economy contracted by 0.2 per cent in May, marking the fifth straight month of shrinking gross domestic product.

The statistics agency will no doubt feed into the early campaign rhetoric again on Friday, when it releases the key jobs report for July. 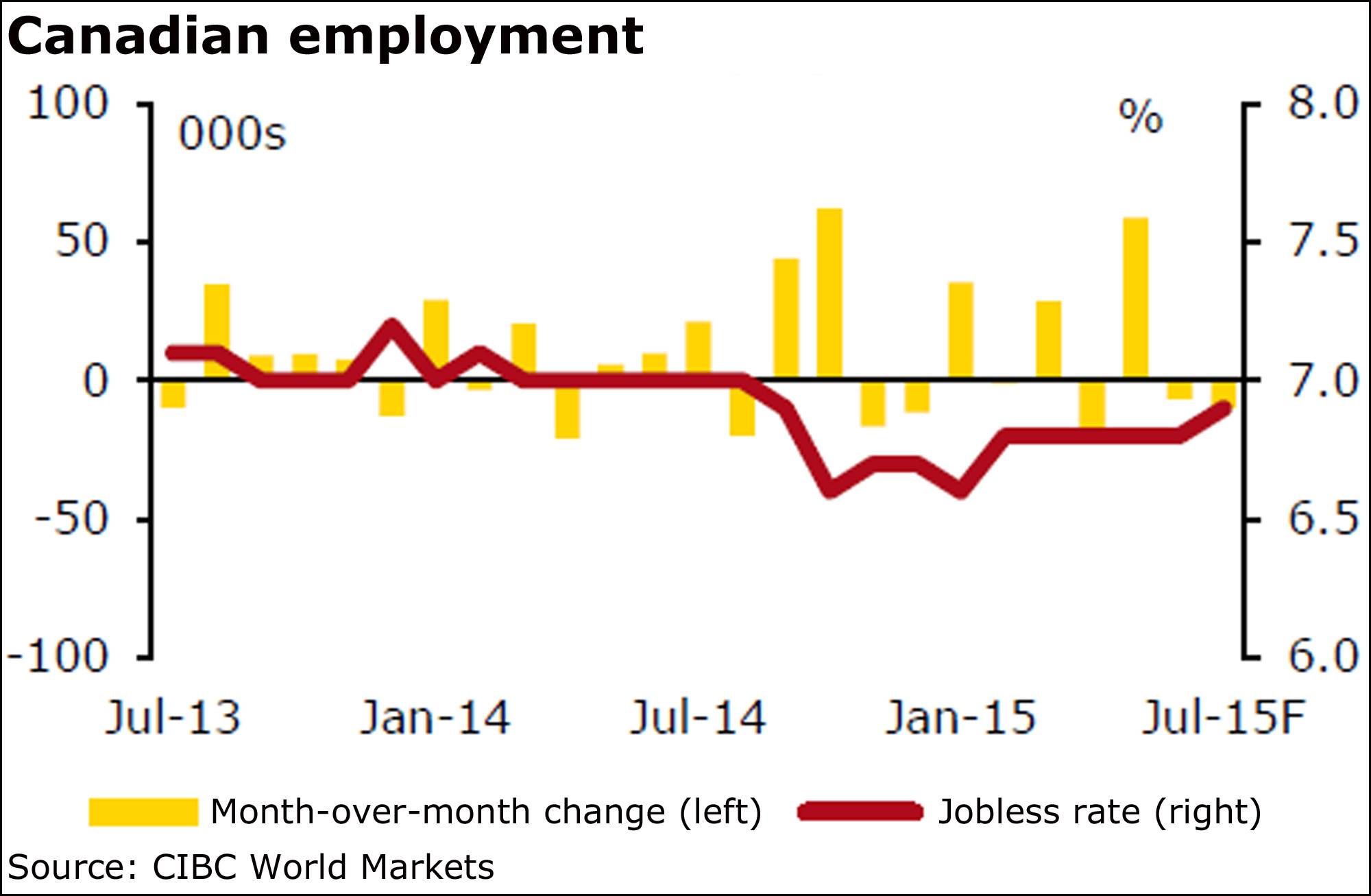 You can’t ever guess what a monthly Statistics Canada employment report will show, and projections among economists range for anything from a loss of 10,000 jobs last month to a gain of 15,000.

Some economists believe, too, that the unemployment rate will inch up to 6.9 per cent from 6.8 per cent in the Statistics Canada labour force survey, not a huge change but ever closer to 7 per cent in the midst of an election campaign.

It’s true that Canada has been gaining jobs, an average of 16,000 a month so far this year despite the hit to the economy. But CIBC World Markets, for one, says “there’s room for a deceleration” in that pace.

“Expect the labour force survey to add evidence to the headwinds facing job seekers out west.”

U.S. jobs numbers will be released the same day, with expectations of 225,000 new positions and an unemployment rate of 5.3 per cent.

But back to Canada, and another key statistic: Exports, which will be reported on Wednesday.

Economists expect to see that June’s trade deficit narrowed from May’s $3.3-billion, but was still rather fat at $2.5-billion.

Amount spent at Canadian “drinking places” in May, down 8.8% from a year earlier: Statistics Canada