Define bubble: “Used to refer to a significant, usually rapid, increase in asset prices that is soon followed by a collapse in prices and typically arises from speculation or enthusiasm rather than intrinsic increases in value,” according to Oxford Dictionaries.

Or, as Capital Economics sees it: When existing homeowners inflate prices “by leveraging their considerable housing equity to buy newer, bigger or more beautiful homes.”

Or, as Bank of Montreal puts it: When “even pigs are flying.”

For anyone who hasn’t followed the past several days of mounting angst over the Toronto area housing market, here’s a recap: 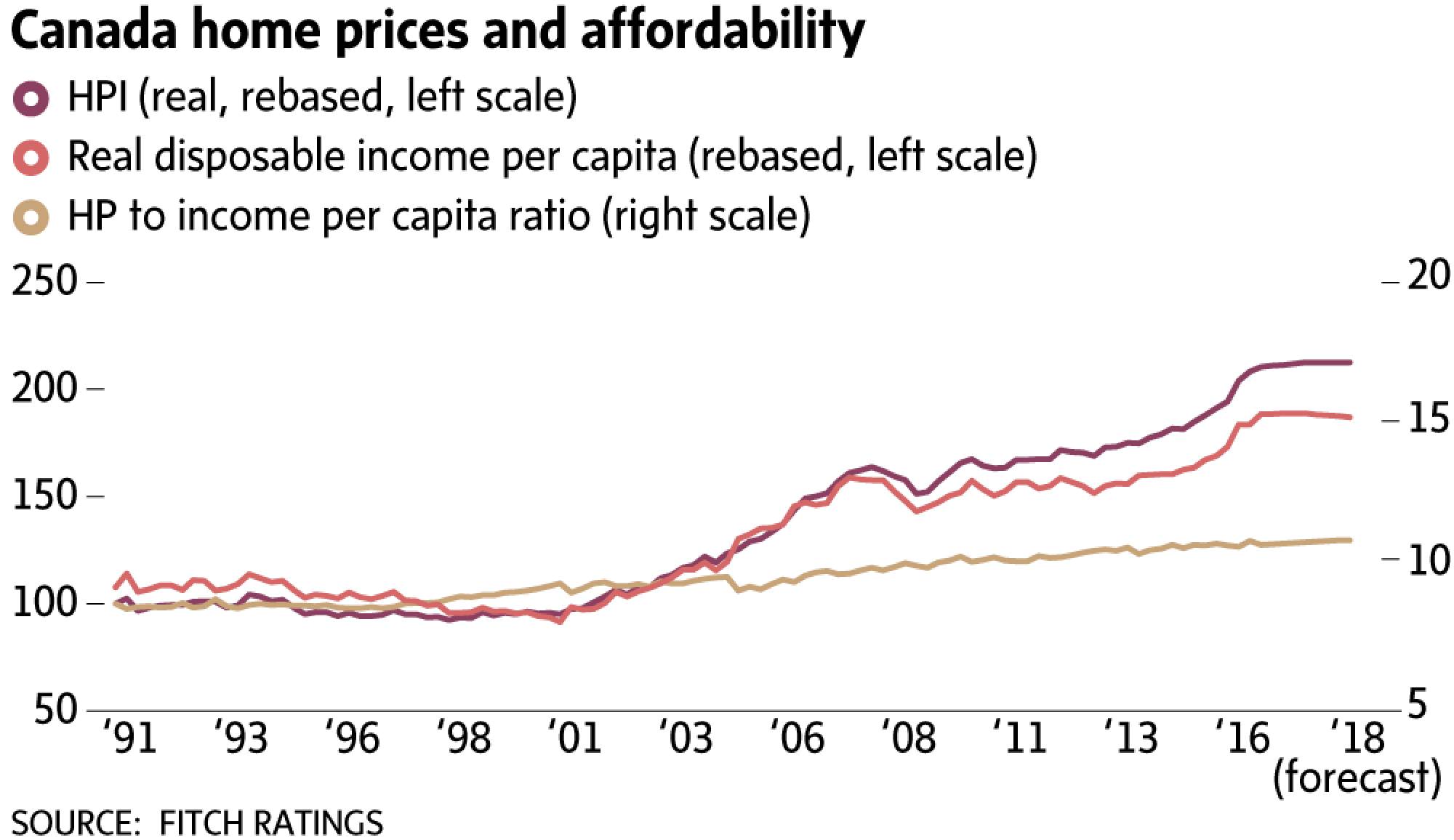 First, even though the point of a bubble is that it eventually bursts, Mr. Porter isn’t suggesting impending doom. Indeed, he said he warned of one in hopes of preventing a pop like the one in the late 1980s.

“Our only goal of calling Toronto’s housing market a bubble was to reinforce the message that it had become divorced from economic fundamentals and was becoming potentially dangerously overheated,” he said in his most recent commentary.

“This is not a near-term call on the market – in fact, given the outlook for interest rates and an improving underlying economy, there’s nothing obvious to meaningfully slow the market at this point.”

An asset bubble, Mr. Porter added, is in the eye of the beholder and can balloon for years.

“And to those who question whether it is a bubble, we can only hazard to guess that they haven’t been looking to buy or sell a home in the past year and are blissfully unaware of the reality on the ground,” he said.

“A random sample of homes that sold this month alone shows a median selling price of 25 per cent over asking, with not one staying on the market longer than eight days. Even pigs are flying in this hurricane of a market.”

Much has been made as to why this is happening. The realtors group, warning Ontario against a foreign-buyers tax like the B.C. government’s levy in the Vancouver area, says policy makers are targeting demand when they should put the focus on supply.

In particular, some observers suggest opening up the Ontario Greenbelt, the protected area that rings the city.

But one of Mr. Porter’s colleagues, among others, says that’s not the issue.

A dwindling supply of detached homes is an issue, said BMO senior economist Robert Kavcic, citing 2006 policies that restricted development around the Greater Toronto Area and included the Greenbelt.

“That effectively turned the GTA/Hamilton/Niagara region into an island with respect to housing development, and development in some areas has indeed begun to push up against the Greenbelt,” he said. 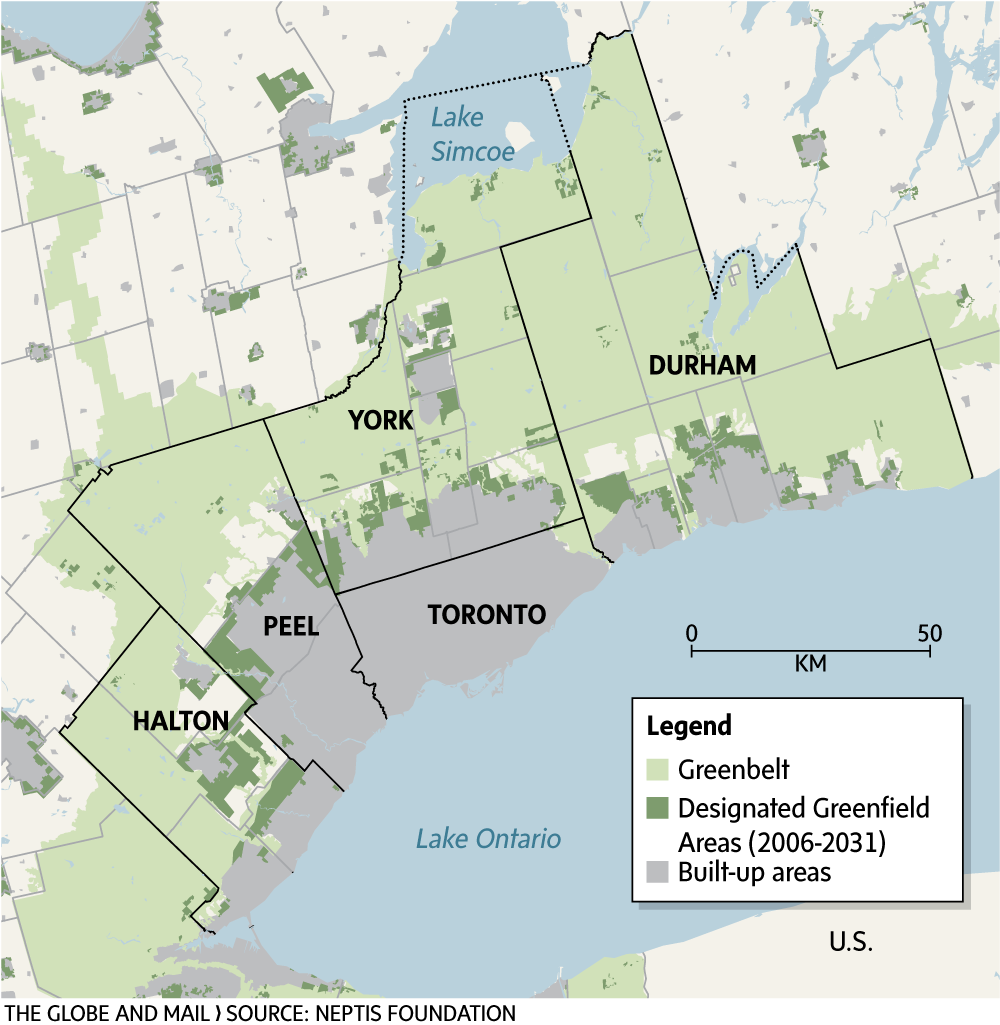 Mr. Porter backed up the supply issue, noting that the ratio of sales to new listings hit a record 93.5 per cent in January, compared to a norm of 40 to 60 per cent, with some nearby regions topping 100 per cent.

But “we are not out of land,” said Mr. Kavcic, citing estimates that just 20 per cent of designated development land has even been used in the past 10 years, and that “outward growth” can run for at least another 15 years.

“Simply removing the Greenbelt therefore won’t bring any more supply to the market.”

Rather, the issues are those of municipal policies related to intensification and densification.

“Densification requirements mean that today’s single-detached homes (the handful that are being developed) look nothing like the coveted properties that were developed through the 1970s and ’80s (see North Oakville versus South Oakville, for example),” Mr. Kavcic said.

“Some 26-foot wide lots are classified as detached today, which is half the norm of the 1980s – they might as well be semis.”

Developers are in fact meeting our needs, Mr. Kavcic added, but the straight numbers don’t necessarily tell the story.

“It’s about composition, as traditional detached homes become scarcer and scarcer within the overall GTA housing stock,” he said.

David Madani, the senior Canada economist at Capital Economics in Toronto, looked at things another way, crunching Toronto Real Estate Board numbers to see what types of homes were selling, and for how much.

“The upshot here is that first-time home buyers aren’t the ones driving the biggest gains in Toronto house prices, based on the simple logic that they simply don’t have high enough incomes to afford them, by any mortgage lenders' standard,” he said, suggesting that that demographic accounted for just one in five Toronto purchases last year.

“Existing homeowners, by leveraging their considerable housing equity to buy newer, bigger or more beautiful homes, are the primary driving force now boosting house prices in Toronto,” added Mr. Madani, who has been warning about real estate troubles for some time now.

“If that’s the case, then it also stands to reason that there cannot be a major shortage of houses for people to live in.”

All of this will play out across Canada’s economy. We’re seeing that now in British Columbia as Vancouver sales plunge, and we’ll no doubt hear more when the B.C. government unveils its budget later in the day.

So far in Canada, housing and consumption have been “unexpectedly resilient” despite the attempts of policy makers to cool things down, said Simon Deeley, fixed income strategist at RBC Dominion Securities.

“Looking forward, we are forecasting a slight dip in consumption growth and a meaningful contraction (0.3 of a percentage point) in residential investment in 2017, alongside a moderation in resale price growth,” Mr. Deeley said “However, while reports predicting a housing correction continue to abound, the above discussion highlights that we may well end up in familiar territory.”

It’s not the busiest few days, but there’s enough to keep interest alive.

Notably, we’ll learn how much Canadians have been spending, and how much more we’re paying for it all.

And, key for markets, the latest thinking from the Federal Reserve.

As for how we’re shopping, Statistics Canada releases its December report on retail sales Wednesday, and economists expect to see anything from a flat showing to a gain of 0.2 per cent. More, if autos are excluded.

Then on Friday, we’ll see the extent to which consumer prices have jumped when Statistics Canada reports on January inflation.

Observers expect an annual rate somewhere between 1.6 and 1.9 per cent.

“Much of that momentum will be the result of weak year-ago gasoline prices, with pump prices up nearly 20 per cent from January of last year,” said Nick Exarhos of CIBC World Markets.

Wednesday brings the minutes of the last meeting of the U.S. central bank’s policy-making group, the Federal Open Market Committee. Don’t expect much more insight, though, as Fed chair Yellen spent two days testifying to Congressional committees last week, so we already know what she thinks.

On the corporate side, there are still some quarterly earnings reports left to go. Notably, Canadian Imperial Bank of Commerce and Royal Bank of Canada kick off the latest results of the country’s major banks.