Mark Carney pretty much summed it up last week: “The result of the referendum is clear. Its full implications for the economy are not.”

The Bank of England Governor went to extraordinary lengths to calm markets, explaining that, while uncertainty rules for now, he is prepared to do whatever it takes in the wake of Britain’s decision to leave the European Union. 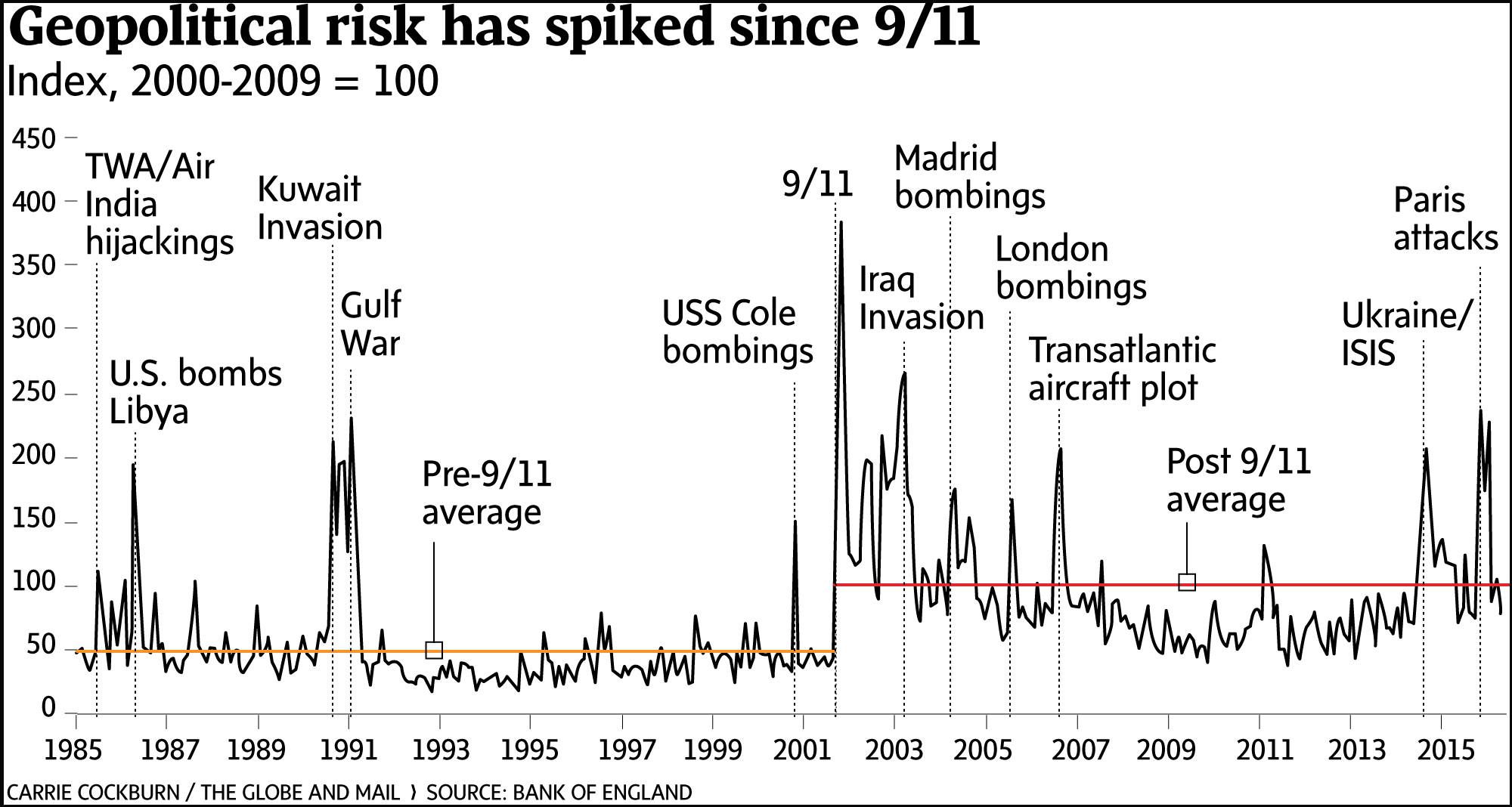 “All this uncertainty has contributed to a form of economic post-traumatic stress disorder amongst households and businesses, as well as in financial markets – that is, a heightened sensitivity to downside tail risks, a growing caution about the future, and an aversion to assets or irreversible decisions that may be exposed to future ‘disaster risk,” said Mr. Carney, the former Bank of Canada chief.

This morning, European markets are down somewhat, though Asian stocks gained.

As we’ve seen play out in the markets and among economists who are revising their projections, the Brexit vote is rippling across the world, with implications for Canada. Here’s how it played out across financial markets after the June 23 referendum: 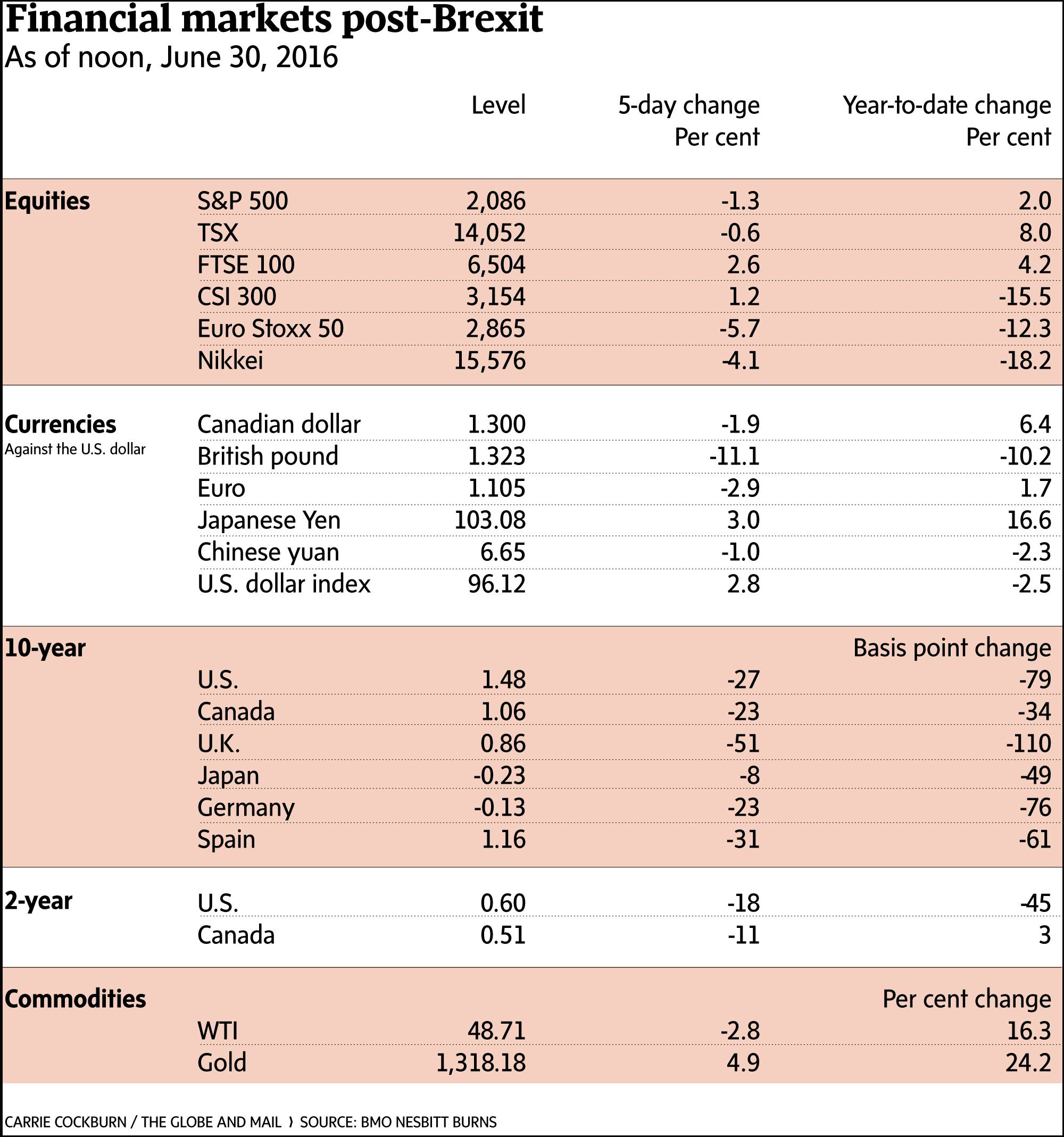 Of course, it’s what happens next that matters at this point. Here’s a sampling from far and wide:

Economists expect Britain to be hurt, with fallout across the globe, including in Canada, where they see a marginal hit. Marginal, yes, but it comes as the economy is already struggling through the oil shock. 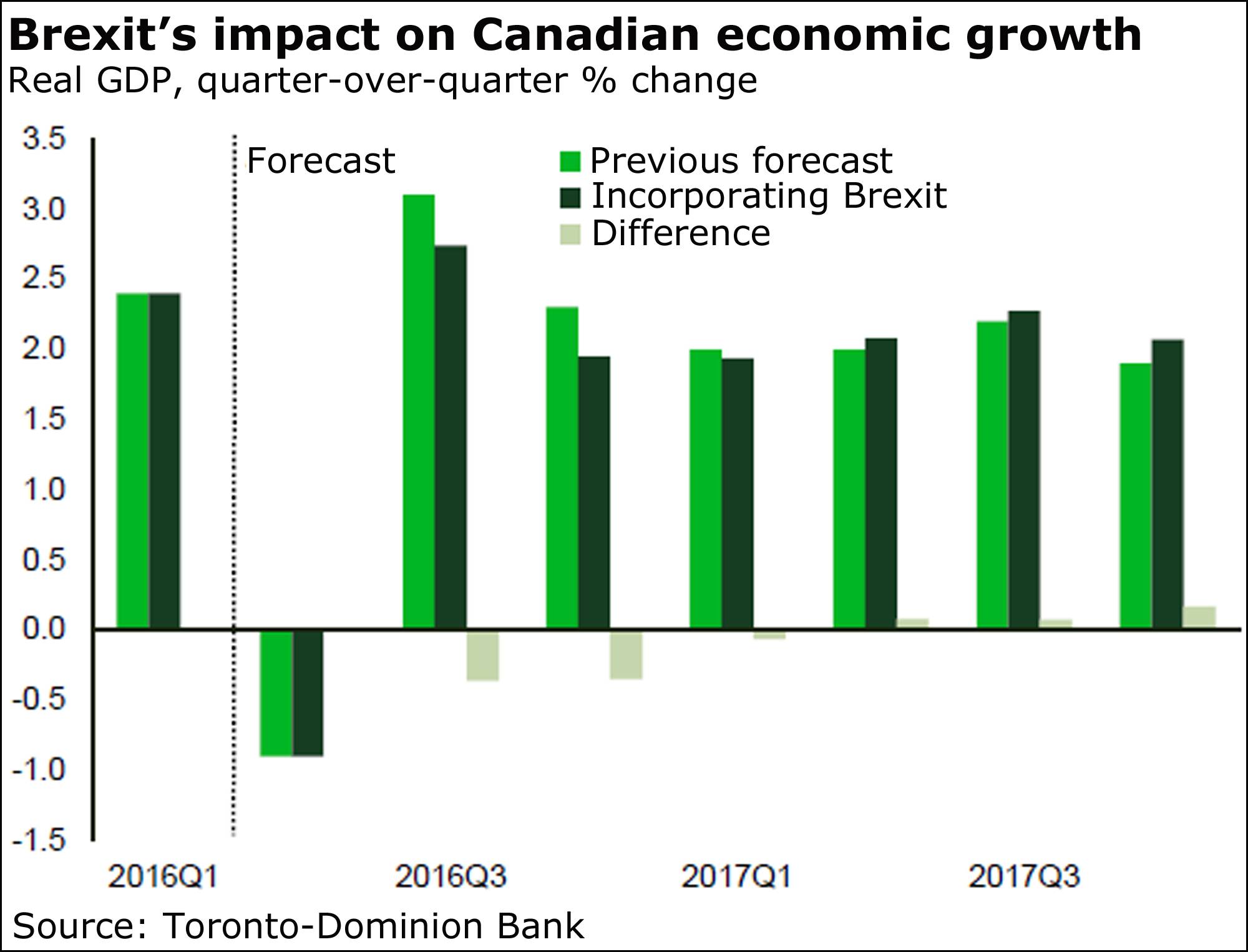 “It now seems plausible that uncertainty could remain elevated for some time, with a more persistent drag on activity than we had previously projected. Moreover, its effects will be reinforced by tighter financial conditions and possible negative spillovers to growth in the U.K.’s major trading partners.” Mr. Carney

“The greatest impact of the Leave vote on Canada will likely be via indirect channels – largely through weaker business and consumer confidence, and through the U.S. where business investment is likely to be weaker, reducing demand for Canadian exports. These impacts are expected to reduce second-half growth by 0.4 of a percentage point this year, pulling 2016 and 2017 annual growth rates down by 0.1 of a percentage point each year on net.” Dina Ignjatovic, Toronto-Dominion Bank

“After registering the strongest growth among G7 countries in [the first quarter], the Canadian economy is set to show a pullback in [the second quarter] due to bad handoff and the impact of wildfires. For 2016, we have trimmed our forecast by one-tenth to 1.2 per cent in light of uncertainties created by Brexit.” Matthieu Arseneau, National Bank

“May’s weak showing is expected to send the annualized [second-quarter] growth rate into negative territory, dropping 1 per cent. Though this hit to the economy will be temporary with growth expected to rebound in the third quarter, the recent Brexit vote and attendant uncertainty with respect to natural resource prices could limit this rebound and weigh on investment activity in the quarters beyond.” Paul Ferley, Royal Bank of Canada

The phrase on the lips of most observers is “lower for longer.” While projections for rate changes vary among observers, they expect the Bank of Canada will hold off for some time, with the Federal Reserve slowing down what would otherwise have been a faster timeline. Where Canada is concerned, economists don’t see the central bank moving higher until late next year or, possibly, as far out as 2018. And, who knows, might the Bank of Canada actually cut its key rate should developments warrant that?

“With the impact on the Canadian economy expected to be relatively contained, a rate cut is unlikely to be warranted. Hence, we continue to expect the [Bank of Canada] to leave rates on hold well into 2018.” Ms. Ignjatovic, TD

“We reiterate our call that the [Bank of Canada] would cut rates by 25 basis points to 0.25 per cent most likely in October. We don’t think that the bank need consider more aggressive action at the present time. The bank’s first line of defence to Brexit-inspired turbulence is most likely to be providing greater liquidity to the financial system to limit any heightened risks to financial stability.” David Watt, HSBC Bank Canada

“While a delay is likely, we remain of the view that the Fed will not sit on the sidelines indefinitely. In light of the relatively subdued impact, we expect the Fed to be in the position to raise rates in early 2017, or even squeeze in one rate hike in December should financial markets stay calm and U.S. economic data remain upbeat.” Ksenia Bushmeneva, TD

Stocks plunged in the wake of the vote, then staged an impressive rally. Where we go from here will, of course, depend on developments. But here are some initial thoughts: 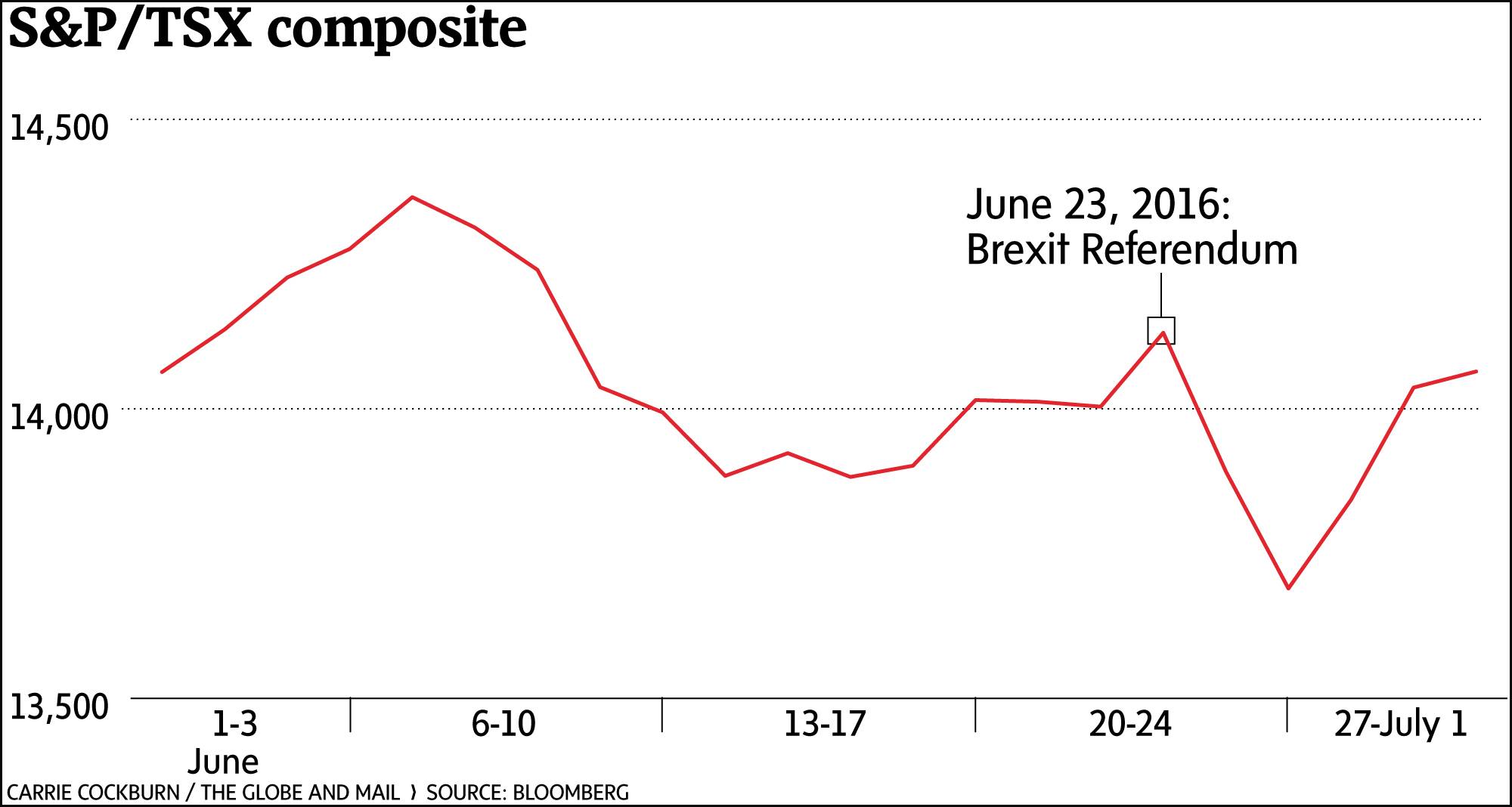 “Overall, while it is still early days, our view is that the more positive points about Brexit-lite and limited contagion should continue to reassure markets, both in the U.K. and the rest of the world.” Julian Jessop, Capital Economics

“We ... expect equities to hit new record highs in 2016 as global economic growth should pick up, interest rates will remain low for an extended period and corporate profits should gain traction with a strong rebound in energy prices during the second half of 2016. ... We still recommend that investors overweight Canadian equities. ... As for our sector allocation in Canada, we continue to recommend that clients overweight the consumer staples and materials sectors. However, we are replacing industrials, information technology and financials from our list of top overweights with the energy and telecommunication services sectors.” Eric Corbeil, Laurentian Bank Securities

“The markets’ perception of the impact of Brexit becomes clearer by looking at which indices are above their 10-day, 20-day and 50-day moving averages. There are only three European markets trading above their moving averages – U.K.’s FTSE, Switzerland’s SMI and Norway’s OBX – none of whom are part of the euro zone. This, I think, adds to the argument that Brexit raises greater concerns about the viability of the European Union going forward.” Angus Nicholson, IG

As BMO Nesbitt Burns senior economist Sal Guatieri notes, the market for government debt “arguably threw up the biggest surprises” this year. Yields on sovereign debt have been tumbling, some in negative territory. 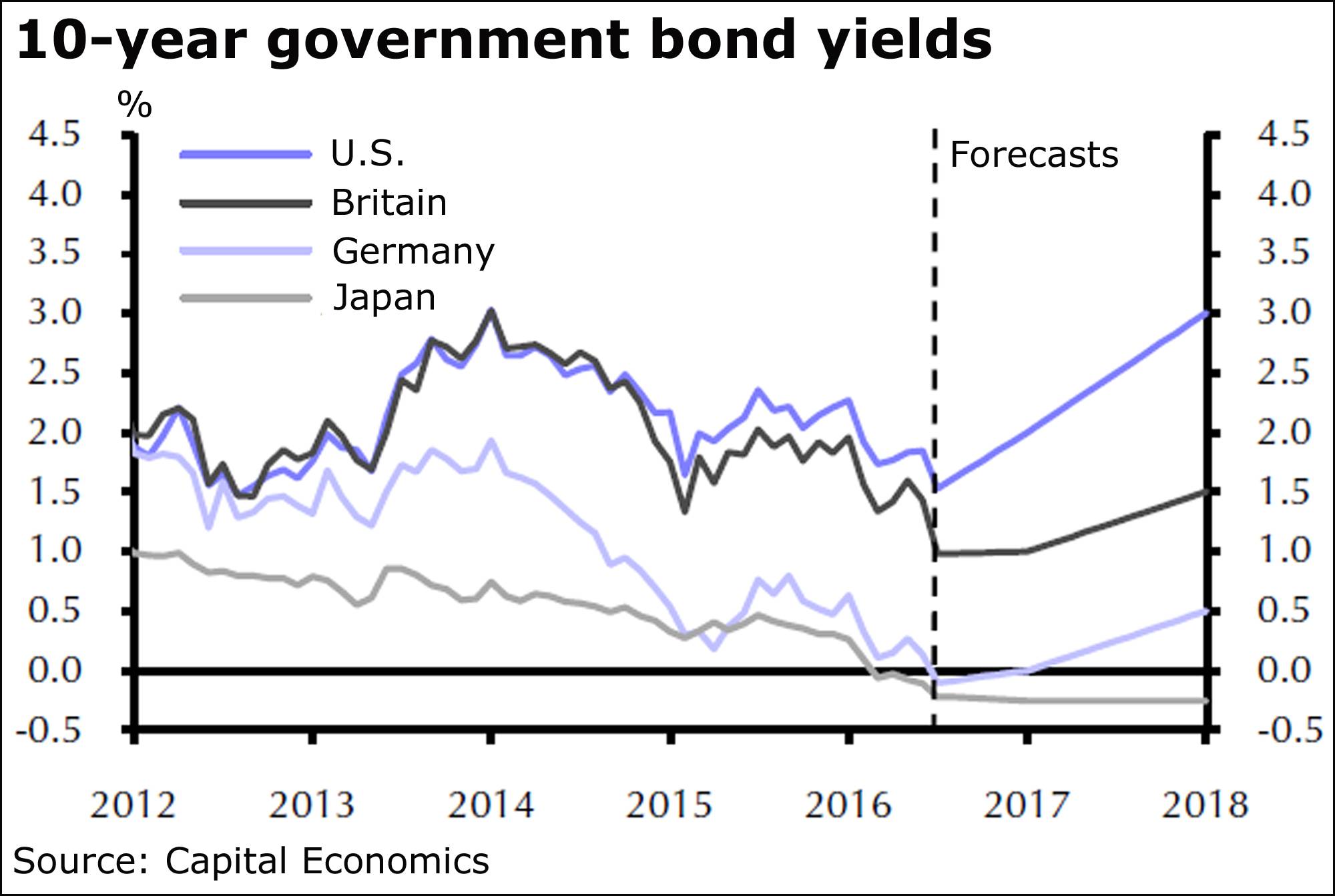 “The bond market performed very well since the beginning of the year but probably overextended itself. ... We maintain our overweight exposure to fixed income securities of corporate issuers versus Canadian government. ... We continue to expect the rebound in the S&P/TSX composite earnings growth to gain steam over the next few months, thanks to rising commodity prices. The S&P/TSX 12-month forward earnings growth is currently estimated at close to 10 per cent, up 3 per cent from levels reached at the end of March. Rising earnings growth historically coincided with relative outperformance for corporate bonds.” Mr. Corbeil, Laurentian Bank Securities

“While there is scope for [Government of Canada bonds] to outperform Treasuries, it may not be as pronounced as in a ‘pre-Brexit’ world – even with near-term indicators pointing to more sluggish activity in Canada. The dominance of international influences also suggests the shape of Canada’s yield curve will remain at odds with domestic fundamentals – at least relative to history.” Mark Chandler, Simon Deeley, Paul Ferley and Nathan Janzen, RBC Dominion Securities

“The rise in the 10-year gilt yield that we project next year is influenced by our end-2017 forecast for the 10-year U.S. Treasury yield, which we are keeping at 3 per cent. ... Elsewhere, the prospect of somewhat looser monetary policy in the euro zone has prompted us to lower our end-2016 and end-2017 forecasts slightly for the 10-year German bund yield (which is currently around -0.1 per cent) to 0 per cent and 0.5 per cent, from 0.25 per cent and 1 per cent.” John Higgins, Capital Economics

God knows, commodities have had their issues without Brexit being thrown into the mix. What happens here will, of course, be key to Canada’s outlook given our resource-based economy. 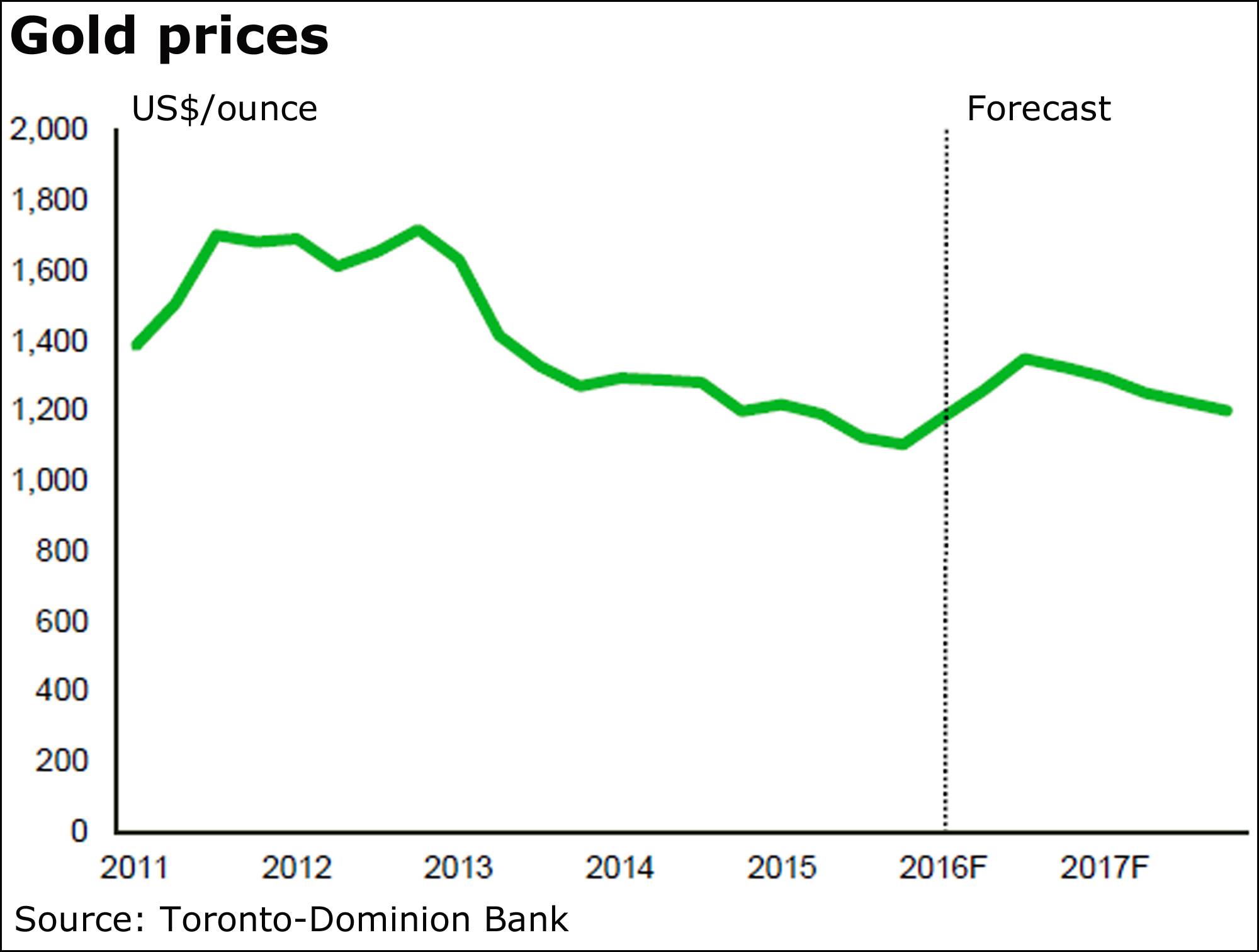 “While we remain steadfast in our view that [West Texas intermediate] will average $55.50 a barrel in the second half of this year, near-term oil prices will remain choppy as improving physical fundamentals clash with macro-based fear stemming from the paper trade. ... Physical oil fundamentals will retake the narrative once the short-term macro-driven volatility is absorbed by the market. We expect dips to be buying opportunities as we head into the back half of the year based on fundamentals rather than fear.” Helima Croft, Michael Tran and Christopher Louney, RBC

“Looking ahead, it seems that gold will remain one of the major beneficiaries in the current backdrop, as heightened volatility and lingering uncertainty will keep investors’ risk appetite in check. ... The elevated level of long speculative positions indicates that gold remains in a highly vulnerable state, as an even slight improvement in investors’ enthusiasm and a shift in sentiment towards gold to more bearish could trigger massive long liquidation and reverse gold’s impressive gains over the past month or so.” Robin Bhar, Société Générale

“Looking at commodity prices, energy and industrial metals are likely to be most adversely impacted by the Leave vote, with potentially slower global growth weighing on physical demand and a stronger U.S. dollar and lack of risk appetite limiting financial demand. ... The ongoing uncertainty, combined with loosening monetary policy conditions around the globe, should propel gold prices to an average of $1,350 an ounce in the third quarter – a level not seen in over two years.” Ms. Ignjatovic, TD

“The real star of the show has been silver, whose price has already jumped by nearly 20 per cent in U.S. dollar terms. ... After such rapid gains, we are wary of revising our forecasts even higher, but we continue to expect silver to outperform gold over the next couple of years. ... While we still expect activity and copper demand to pick up in the second half of the year, we have revised down our China economic growth forecasts. Accordingly, we are now expecting a smaller copper market deficit this year, and have nudged down our end-year price forecast from $5,500 to $5,000 per tonne.” Caroline Bain and Julian Jessop, Capital Economics

If there’s anything that has been bounced around this year, it’s the Canadian dollar, hit by the oil shock, diverging rate paths between the Fed and the Bank of Canada, a stronger U.S. currency and, most recently, the Brexit fallout. The British pound, of course, was really whacked. 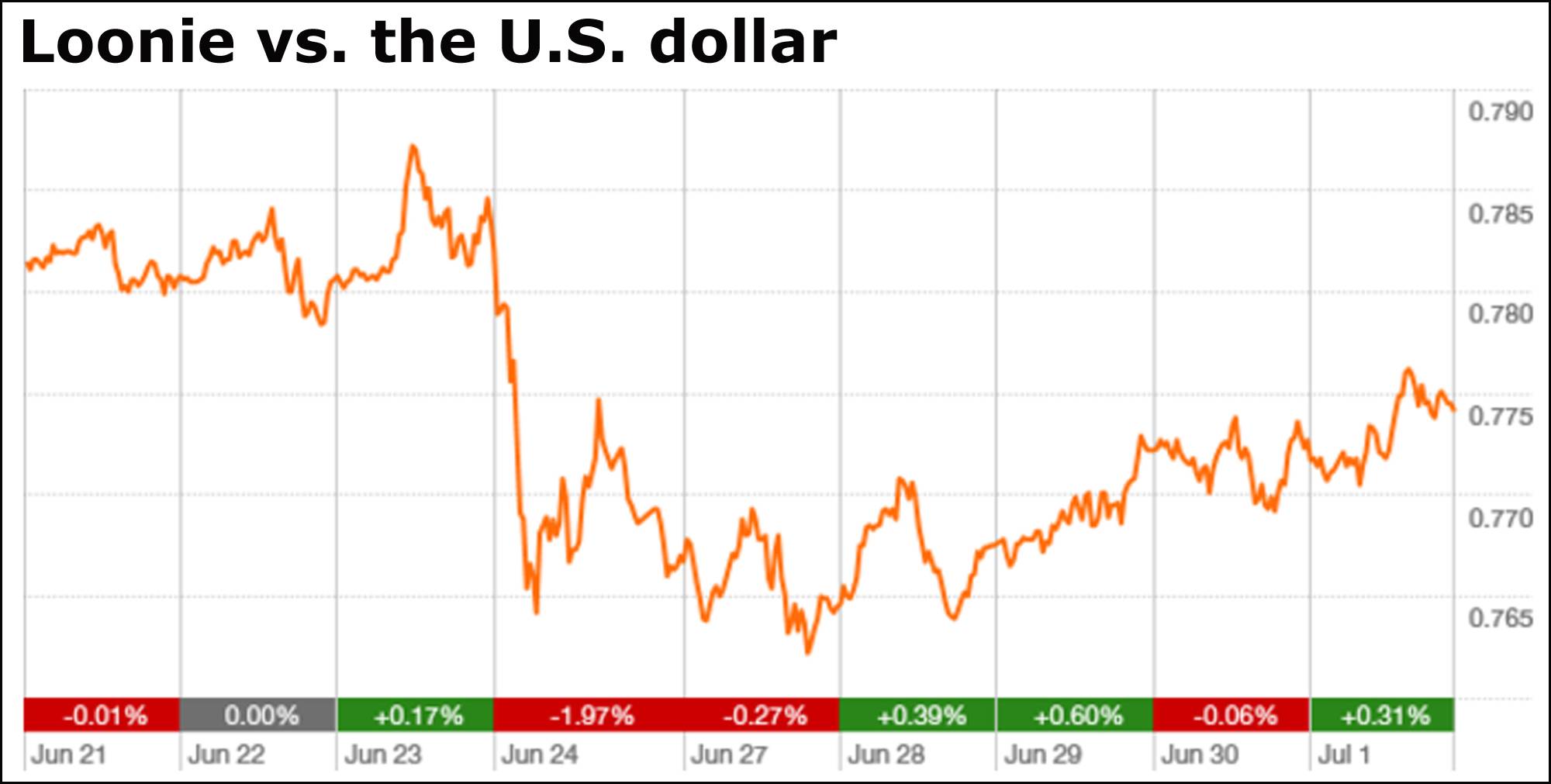 “While the Canadian dollar wasn’t as affected as other currencies, it has been trading weaker against the U.S. dollar in the days following the referendum. As uncertainty surrounding Brexit lingers, that pressure on the currency is unlikely to fully abate any time soon. ... A December rate hike from the Fed will see negative front-end spreads drive the Canadian dollar weaker against its U.S. counterpart. With oil prices expected to languish around current levels, look for the loonie to reach the 1.35 [74.1 cents (U.S.)] level by the end of the year.” CIBC World Markets

“[The Canadian dollar] is still a safe(r) haven against a number of other important currencies. ... The search for global yield, or perhaps more appropriately put as the search for bonds where one isn’t guaranteed of principal if held to maturity, positions Canada rather nicely against many others.” Derek Holt and Dov Zigler, Bank of Nova Scotia

More on the loonie

When all is said and done after a dramatic first half of the year, one wonders how many investors really are of the give-me-another-one-just-like-the-other-one mindset.

“Whether 2016 ends with a dazzling display of fireworks (post-U.S. election) is unknown,” said BMO’s Mr. Guatieri.

“But after all the pyrotechnics so far, many investors would be content with sparklers.”