Canada’s economy has now contracted for four months in a row, meaning Canada is flirting with another recession and again raising questions over whether the central bank will cut interest rates a second time.

The economy had been expected to kick off the second quarter on a somewhat better footing after the contraction of the first quarter.

But, Statistics Canada said today, gross domestic product inched down 0.1 per cent in April largely on the hit from energy.

So, too, did manufacturing, utilities and construction, though agriculture and forestry perked up along with services industries, The Globe and Mail's David Parkinson reports.

“Oil and gas extraction fell 3.4 per cent, mainly as a result of a decline in the non-conventional oil extraction industry, which experienced maintenance shutdowns and production difficulties in April,” the statistics agency said.

Economists have already written off the first half the year, but something better was still expected for April.

This also brings into question the outlook that had been painted by Bank of Canada Governor Stephen Poloz.

A recession is typically defined as two consecutive quarters of contraction, meaning May and June will have to be stronger to avert that in Canada.

Even if the May showing is flat, said Andrew Grantham of CIBC World Markets, there could still be a “modest negative” for the second quarter.

“It probably already feels like a recession for people in Alberta and Saskatchewan,” he said.

“Today’s data certainly raises the possibility of that,” he added.

CIBC is already projecting a flat reading for the second quarter, so it could well be slightly negative or equally slightly positive, Mr. Grantham said.

Which shifts the focus to Mr. Poloz after his surprise January rate cut, and whether he’ll do it again.

Others have suggested this, but Mr. Grantham calls it a “close call.”

First, he said, this is due largely to one specific sector, oil, and there are questions about how a rate could help on that front. Then there’s the fact that oil prices have rebounded.

“GDP came stumbling out of the gate in 2015 with four consecutive monthly declines, suggesting it will need some solid gains in the next few months just to keep it out of the red for the entire first half of the year,” said chief economist Douglas Porter of BMO Nesbitt Burns.

“The latest growth disappointment - along with the rumbling uncertainty surrounding Greece - has simply cranked up the odds of another Bank of Canada rate cut as some point this, and heaped renewed downward pressure on the Canadian dollar.”

Mr. Porter said he still believes economic growth will “recover modestly” going forward and the Bank of Canada will hold its fire, but the “odds of another rate cut have just improved.”

A remake I'd love to see

Rumours and speculation are rampant this morning over whether a truly last-minute deal can be reached in the Greek crisis, but Athens has made a fresh proposal to creditors.

Greek won’t make its payment to the IMF, and its bailout expires today.

But the government is now proposing a two-year aid deal amid a restructuring of its debt.

“Whatever the rights and wrongs of the Greek government’s position, what is playing out here is clearly a last throw of the dice in a high stakes game of chicken, with Greek Prime Minister Alexis Tsipras appearing to hint that he and his government would step down if Sunday’s referendum went against them,” said chief CMC Markets analyst Michael Hewson.

“EU Commission President [Jean-Claude] Juncker strayed a little too far into the realms of bad taste yesterday, urging the Greek population not to commit suicide by voting No, which in a country that seen suicides soar as a result of EU policies was crassly insensitive, and could well turn out to be a massive own goal, if the vote is indecisive,” Mr. Hewson added.

“Maybe that explains last night’s late move to make a fresh attempt at trying to reach a deal by the EU Commission president, but in any event the deal was rebuffed by the Greek PM.”

Fear not should the up-til-now unthinkable happen, economists say.

Yes, Athens is on the brink of collapse. Yes, it could well leave the European monetary union. Yes, markets have recoiled.

But no, it wouldn’t be catastrophic, observers say.

This comes as Greek Finance Minister Yanis Varoufakis confirmed today that Athens would squelch on the €1.6-billion payment due to the International Monetary Fund.

“If, as seems increasingly likely, Greece defaults and exits the euro zone within the coming months, the implications for the world economy should be fairly modest,” said Andrew Kenningham of Global Economics in London.

“Indeed, it could even turn out to be positive development, as the euro zone and Greece itself may be strengthened by a separation,” the group’s senior global economist said in a report.

Markets have been in an uproar over the failure of Greece and its creditors to strike a deal before its bailout expires today and the IMF payment comes due.

Athens has now called a referendum on the creditor demands, slapped on capital controls and closed its banks until next week.

Thus, markets fear a so-called Grexit, or Greece’s exit from the euro zone.

(An offshot word is “Graccident,” which is Athens missing today’s payment.)

A Grexit would surely spark more turmoil in stock and currency markets, observers say, but they see that ending in time, with little in economic ramifications.

Greece is now a tiny economy compared to others, Mr. Kenningham noted, and the financial links with the rest of the globe have declined.

The market reaction so far has been “appropriate,” said BMO's Mr. Porter, but investors shouldn’t “fear the worst” even if the Greeks vote No.

First, he noted, they may vote Yes and accept the demands so they can stay in the euro zone. Life is particularly ugly for them right now.

And it’s not even a given that a No vote would see them leave. 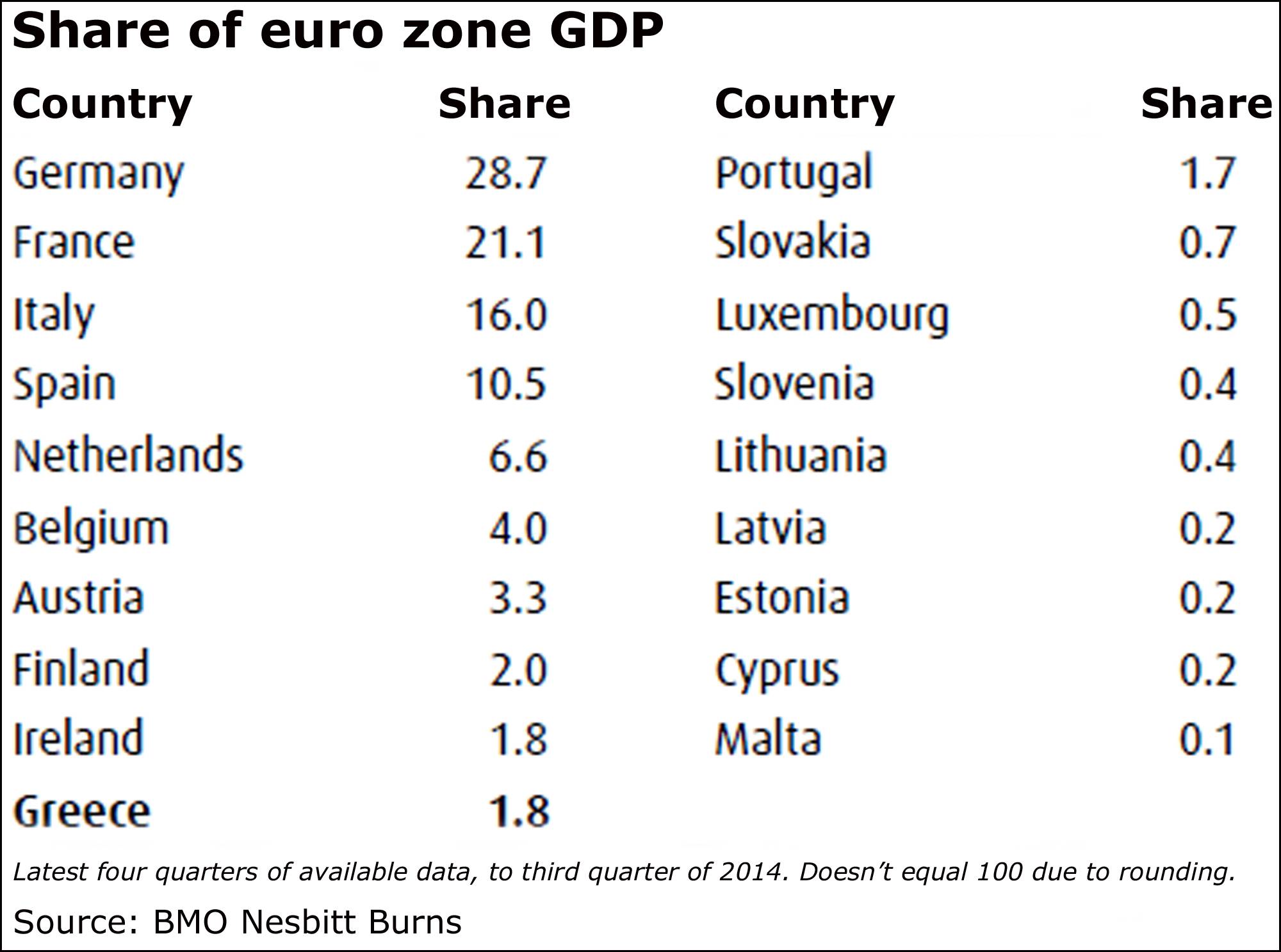 Like Mr. Kenningham, Mr. Porter noted that Greece’s economy is small, about one-eighth the size of Canada’s and accounting for less than 2 per cent of the EU economy.

Most of its debt is now out of the hands of the private sector, so the risk there is smaller.

As well, he noted, both the European Central Bank and other peripheral countries are in better shape now than they were a couple of years ago.

“In terms of contagion risks, this is far from 2012,” Toronto-Dominion Bank economist Andrew Labelle said in a report, referring to the earlier ugly episode involving Athens.

“Exposures of the European banks to the Greek banking system have been significantly reduced,” he added.

“A large majority of Greek public debt is owned by official European creditors. The ECB has the ammo to quell rising volatility.”

Both Mr. Porter and Mr. Kenningham see the possibility of a Grexit actually strengthening the euro zone, in the BMO economist’s view because “ridding itself of its weakest member may make the remaining union stronger.”

“After a default and devaluation, Greece should undergo at least a few years of rapid growth,” Mr. Kenningham said.

“It is also possible that confidence in the rest of the euro zone will be given a temporary boost once the uncertainty surrounding Greece’s future has lifted,” he added, though noted the still-troubled economies of Spain and Italy.

As an aside, Mr. Porter also noted that there would be little fallout in North America, as 0.05 per cent of U.S. exports and just 0.02 per cent of Canadian exports are bound for Greece.

Who's to blame for Greece's 'sink-or-swim' moment?

Cenovus Energy Inc. is selling its royalty business to the Ontario Teachers’ Pension Plan for about $3.3-billion.

The business holds about 4.8 million gross acres of land in Alberta, Saskatchewan and Manitoba, The Globe and Mail's Bertrand Marotte reports.

“The proceeds from this sale will strengthen our balance sheet and provide us with greater resilience during these uncertain times as well as the flexibility to invest in organic projects with strong returns,” chief executive officer Brian Ferguson said in a statement.

The company had toyed with several options, including an initial public offering for the business.

“The probability of Greece exiting the euro zone is now about 50 per cent.”S&P, as it cut Greece's rating to CCC- 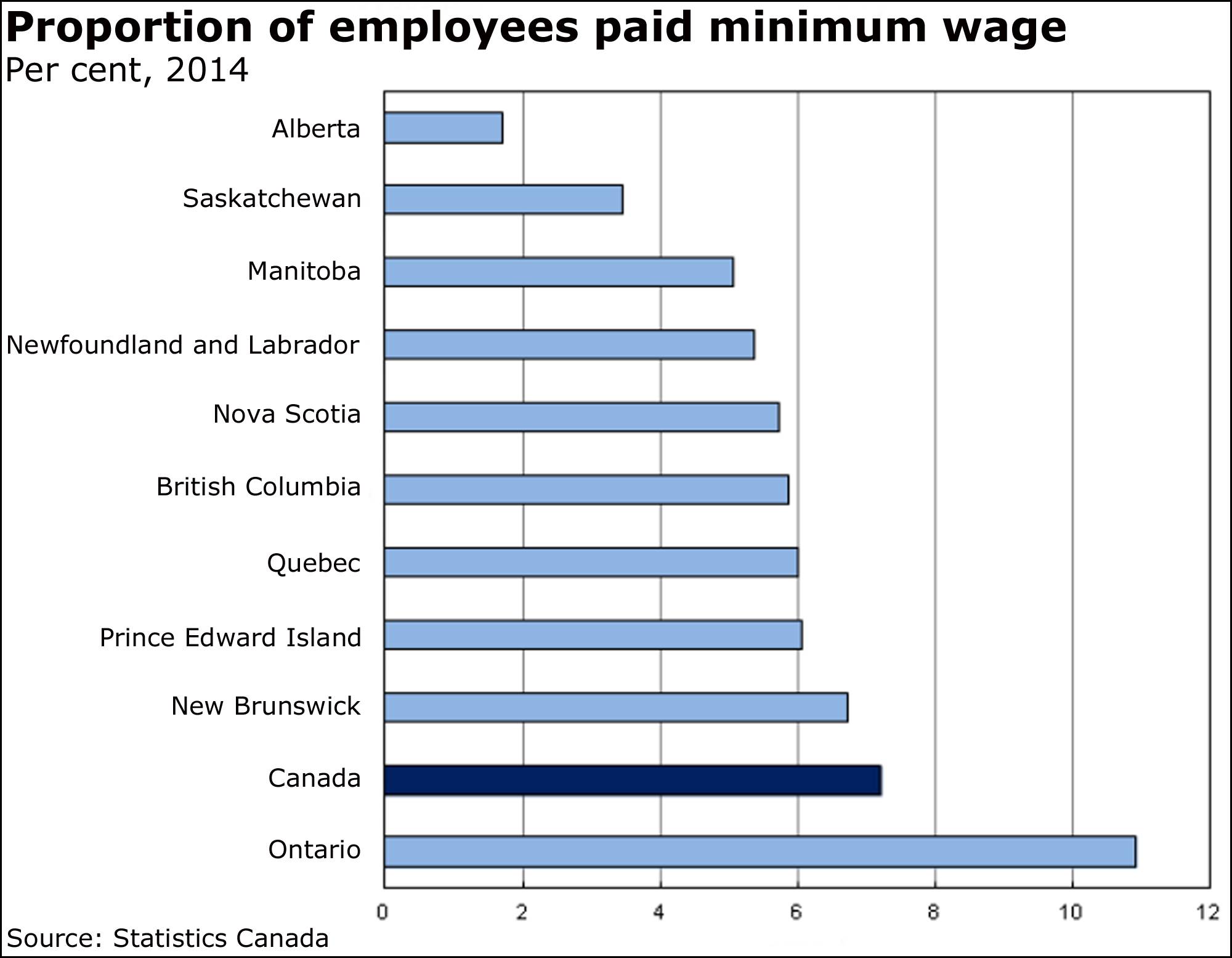