These are stories Report on Business is following Tuesday, May 13, 2014.

El Chapo and BlackBerry
The story of Joaquín Guzmán Loera reads like a perverse ad for BlackBerry Ltd. and its widely praised security.

Think something along the lines of: "If it worked for a Mexican drug kingpin, it'll work for you."

The capture of Mr. Guzmán, as told by The New Yorker, is a fascinating tale about the search for the chief of the Sinaloa drug cartel. But it also highlights one of the big selling points of BlackBerry, the embattled Canadian smartphone maker now being overhauled under a new CEO.

Mr. Guzmán, known as "El Chapo," or Shorty, originally was arrested almost 20 years ago, though escaped from a Mexican prison in 2001, only to be captured again a few months ago.

His life as a fugitive, reportedly at least partly spent in the Sierra Madre, is where BlackBerry comes in.

"Like many narcos, he was suspicious of satellite phones, because most of the companies that manufacture them are American and the devices are relatively easy for law-enforcement officials to compromise," according to the article.

"But the BlackBerry is made by a Canadian company, and Mr. Guzmán felt more comfortable using one."

The Drug Enforcement Agency, however, "homed in" on the wireless device, giving Mexican authorities a location.

Mr. Guzmán escaped that raid, handing his BlackBerry to one of his men, who took the authorities on a wild goose chase.

And talk about the stuff of a Hollywood movie: After that, according to the magazine, a woman dubbed "La Voz," or The Voice, handled his communications, but messages were only transmitted via BBM, BlackBerry's hugely popular messaging service.

"Although Guzmán continued to use a BlackBerry, it was almost impossible to track, because it communicated with only one other device," says The New Yorker.

Eventually, authorities arrested one of Guzmán's men – keeping with the theme here, his nickname was "El Picudo," or Pointy Nose – who told them Guzmán was with an associate dubbed El Condor.

Authorities had tracked Condor's BlackBerry, and, thus, in February found their way to Guzmán, who surrendered.

Valeant to boost bid
Valeant Pharmaceuticals International Inc. is raising the stakes in its quest for Allergan Inc., saying today it plans to boost its hostile bid but won't go overboard.

In a letter to Allergan shareholders, Valeant, which is backed by Bill Ackman and his Pershing Square Capital Management, was responding to its target's rejection yesterday of the cash-and-stock offer.

"Based on your feedback, at our May 28 webcast, we plan to improve our offer for the company – to demonstrate our commitment to getting this deal done," Valeant CEO Michael Pearson said in the letter.

"We are prepared to pay a full and fair price, but, consistent with our track record, we will remain financially disciplined."

"Our strong first-quarter financial and operational results demonstrate that we are making very good progress executing on our strategy and our teams are delivering on virtually all of the targets that we have set to date," said chief executive officer Doug Suttles.

Among those potential measures is a negative rate on bank deposits, the news organization said, quoting a source.

There has been widespread speculation surrounding what the European Central Bank may do at its June meeting, given persistently slow inflation.

The Journal report sent the euro tumbling this morning.

"The contradictions within the article make us skeptical about the accuracy of its details, but the point is that the Bundesbank, thought to be the most conservative monetary institution in Europe, isn't likely to block policy moves that have the support of the rest of the ECB governing council," said Derek Holt and Dov Zigler of Bank of Nova Scotia.

"And the way in which the ECB has done its version of [quantitative easing] in the past, namely by flooding the banking system with low-cost liquidity, could well be repeated at some stage."

BlackBerry targets business clients through their employees
May 8, 2014 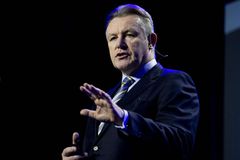