The good, the not-so-good and the ugly

Bank of Montreal’s new outlook highlights the jigsaw puzzle that is Canada’s economy in the wake of the oil shock.

The forecast by senior economist Sal Guatieri warns Alberta and Newfoundland and Labrador will probably remain stuck in recession this year, while Atlantic Canada ekes out just “modest” economic growth, and British Columbia and Ontario push ahead with “moderate” expansions.

All in all, hardly a stellar performance anywhere. Indeed, Mr. Gautieri expects the Bank of Canada will jump into the fray again with another cut to its benchmark interest rate in the spring.

“The Canadian economy remains weak due to sharp reductions in investment and income in the oil-producing regions and further declines in the mining sector,” Mr. Guatieri said. 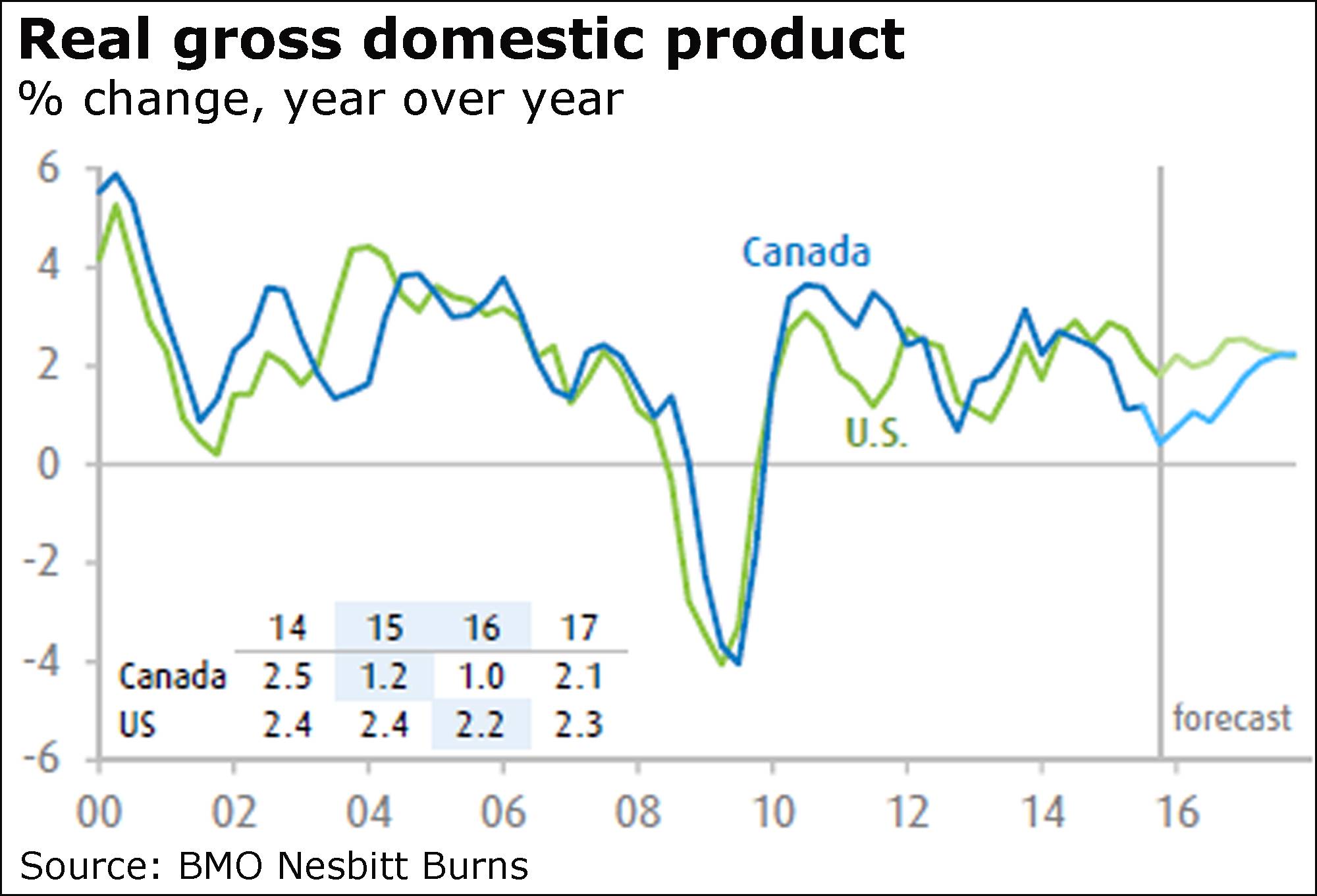 Mr. Guatieri projected economic growth of just 1 per cent this year, in line with several other forecasts, but a bounce to 2.1 per cent in 2017 amid gains in crude prices and the impact of the new government’s infrastructure spending plans.

He also forecast a better showing next year in Newfoundland and Labrador and Alberta, again because of oil gains but also, for the latter, the province’s decision not to change its royalties regime. 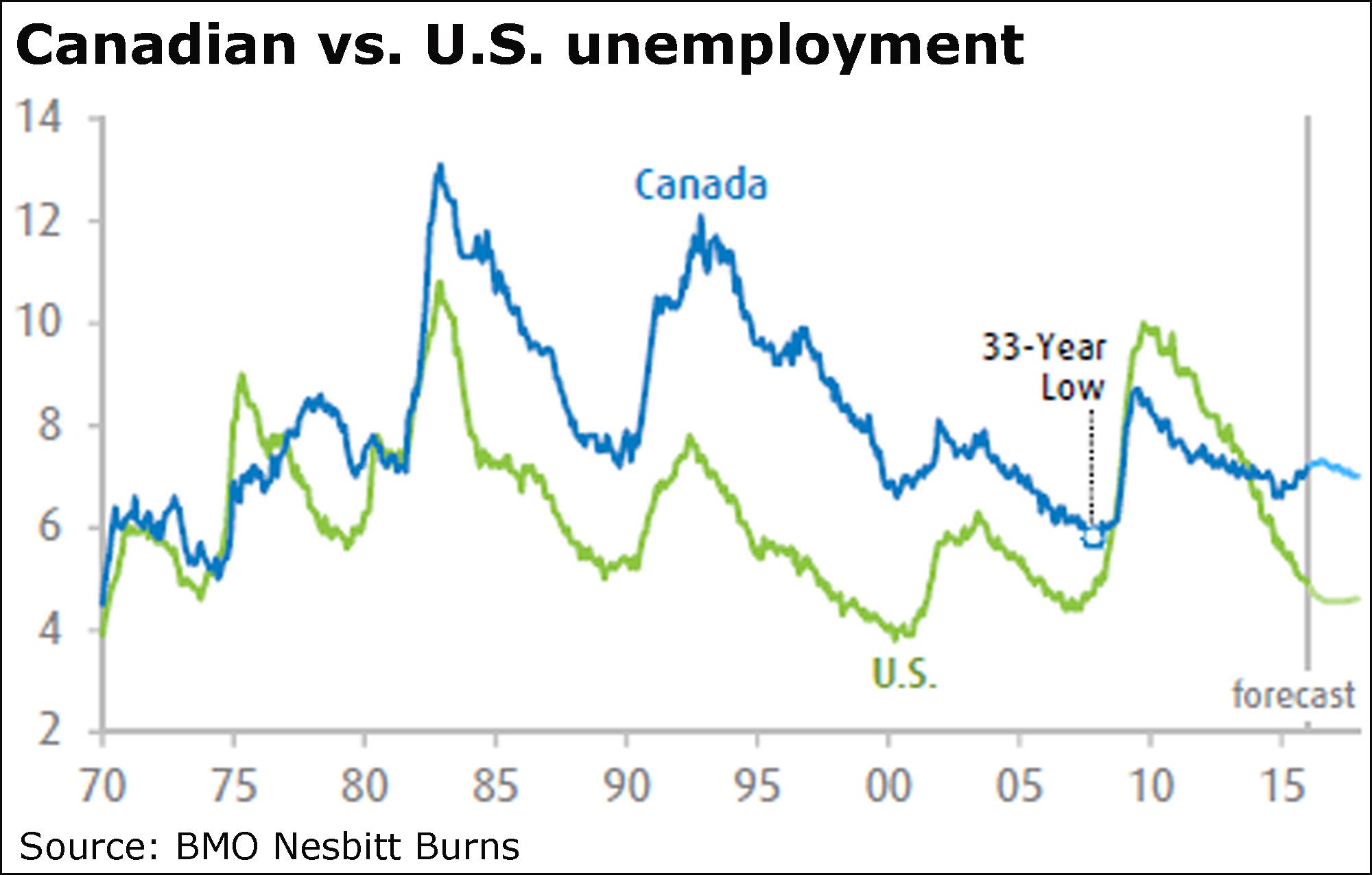 Unfortunately, he also suggested unemployment will continue to hold stubbornly above the 7-per-cent mark as companies in the energy provinces continue to cut jobs.

Canada’s jobless rate is now at 7.2 per cent. 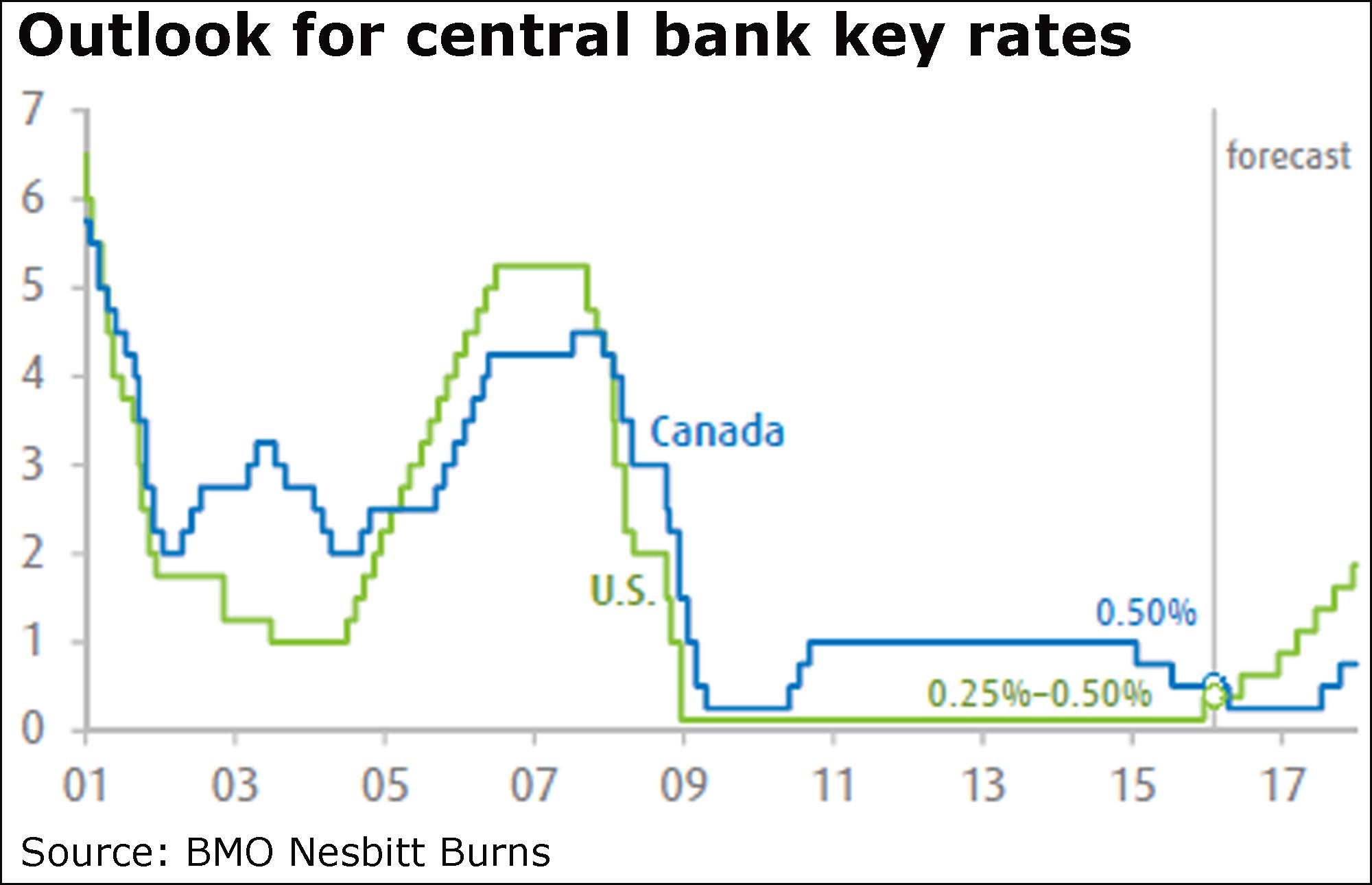 If all goes according to Mr. Guatieri’s suspicions, Canada could see a double-barrel approach from both fiscal and monetary policies.

“The Bank of Canada stepped back from reducing policy rates in January, possibly because it feared a speculative run on the currency could destabilize confidence and inflation expectations,” he said.

“However, a somewhat steadier currency and expected weak activity in the first half of the year should trigger a final rate cut in the spring.” 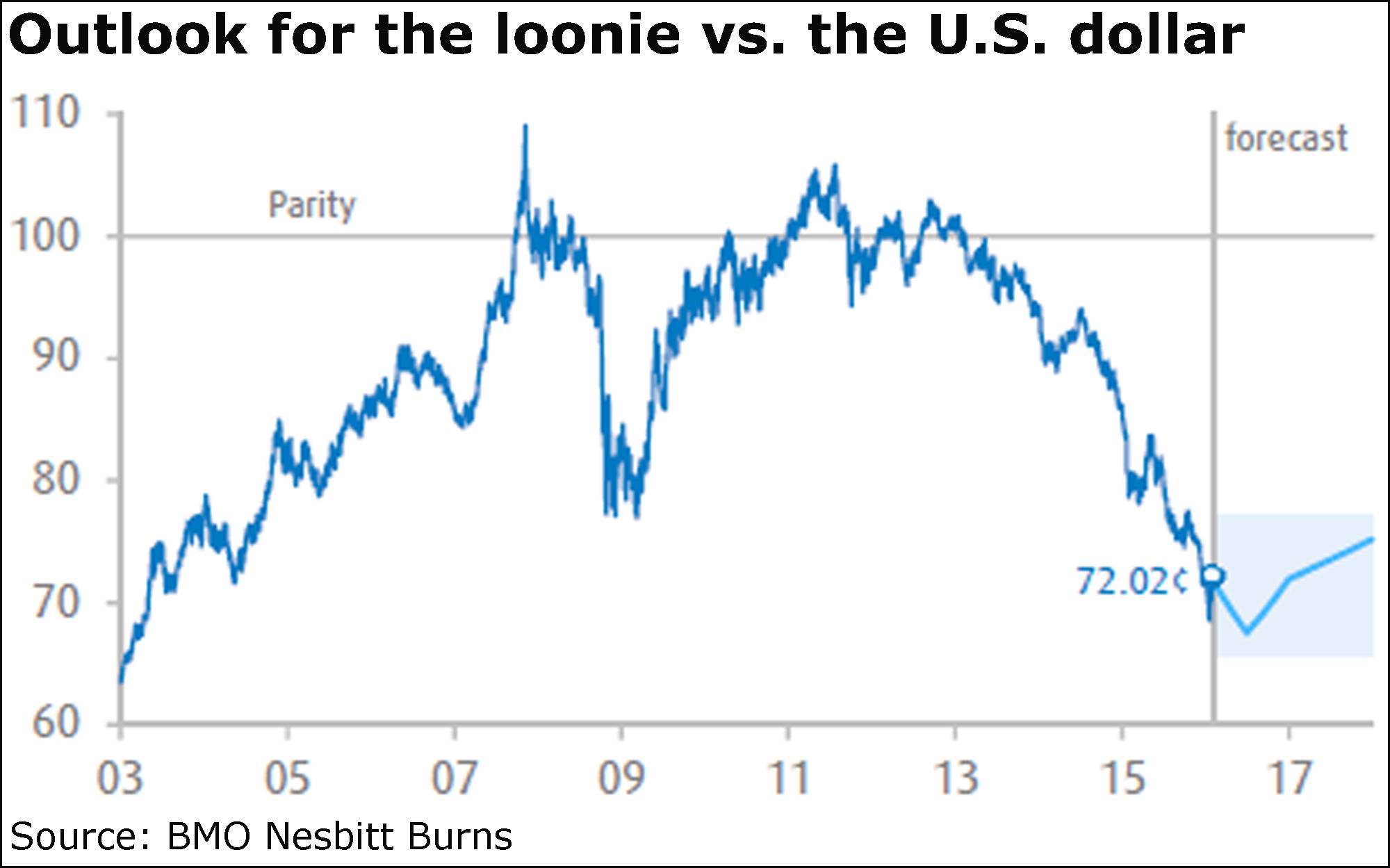 What he means by a steadier currency is a loonie that probably slumps to below 68 cents by summer, and bounce back to 72 cents by the end of this year. 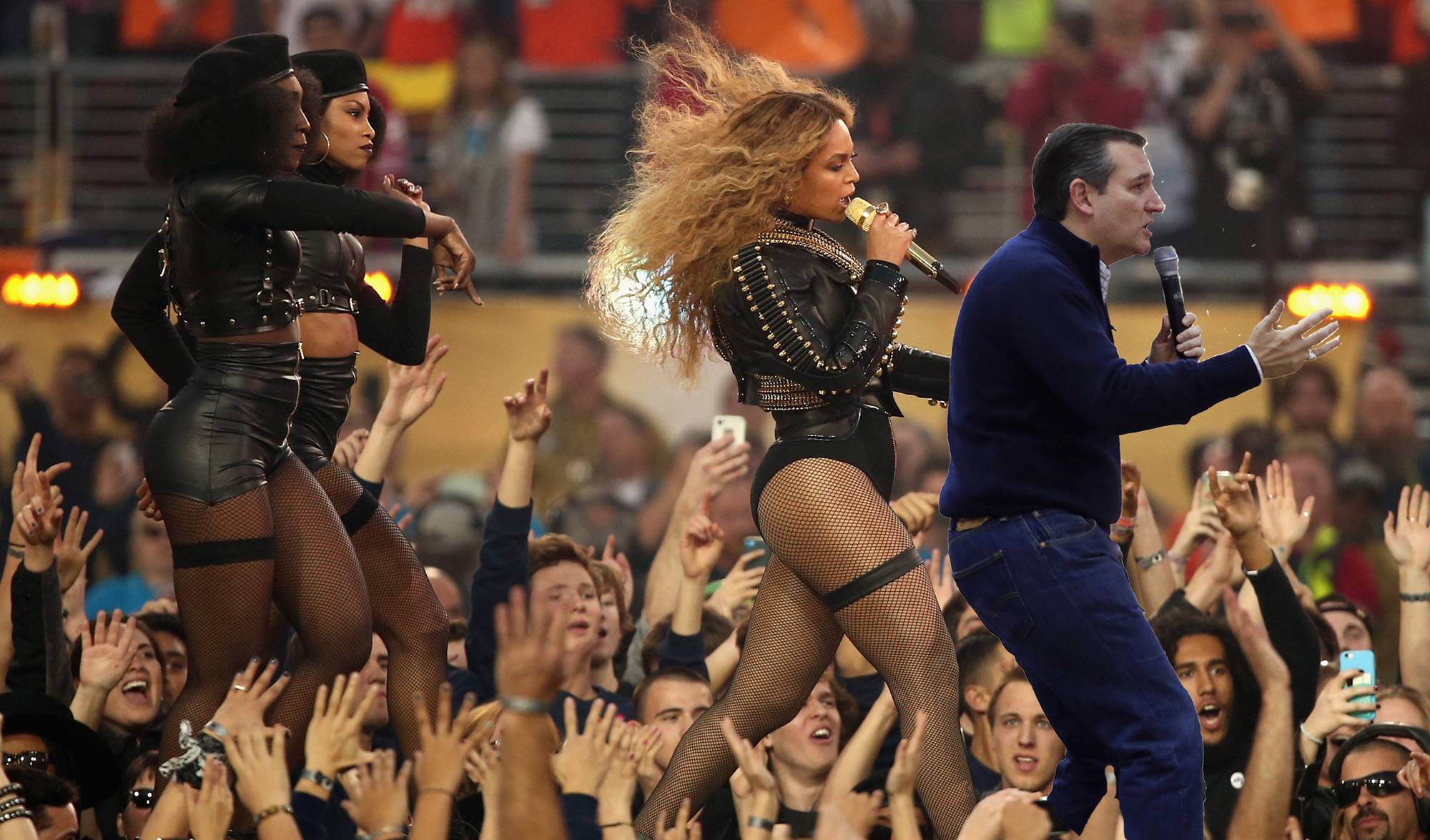 “Here's how we run a campaign in Calgary.”

Canada’s Fortis Inc. has struck a huge deal to swallow what it says is America’s biggest independent transmission utility.

The eastern Canadian utility, which will pick up operations in Michigan, Iowa, Minnesota, Illinois, Missouri, Kansas and Oklahoma, said it will become one of the top 15 public utilities in North America, based on an estimated $42-billion (Canadian) in enterprise value.

Toronto-Dominion Bank economists expect Canada’s economy to get a bit of juice from the impact of the falling loonie on travel patterns.

A “back of the envelope calculation” by deputy chief economist Derek Burleton and economic analyst Admir Kolaj suggests it could come in at between $4-billion and $5-billion for 2015-16 when all is said and done. 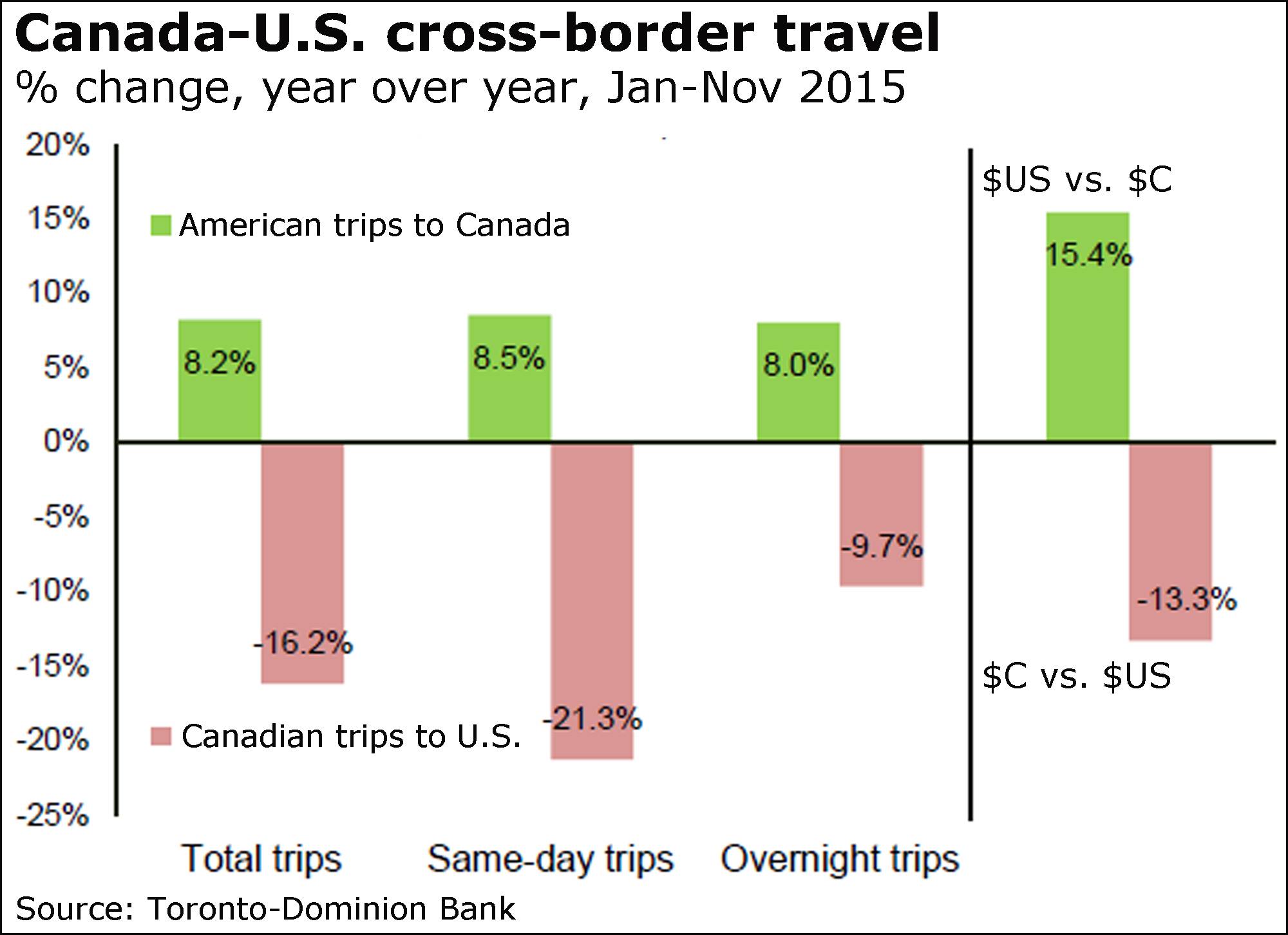 “Over the last few years, cross-border flows of spending have been heavily tilted toward the south,” they said in a report.

“However, the tide has begun to shift, as the declining Canadian dollar has been weighing on the number of Canadian visits to the U.S. and stimulating more American visits to Canada,” they added.

“We see little stopping a continuation of this trend in 2016, providing a modest but welcome tailwind to Canada’s economic growth.”