A global banking body is warning of a threat to Canada’s banking system, flagging likely “stress” from the runup in credit.

The Bank for International Settlements (BIS) isn’t saying that trouble down the road is a certainty. But its “early warning indicators” signal that stress is likely, according to a spokesman for the group.

The BIS, which is made up of central banks across the globe, uses a rather complex formula in determining this.

But the bottom line is that Canada has an elevated credit-to-GDP “gap” compared to most other countries.

That gap, the difference between credit-to-GDP compared to its long-term trend, stood at 12.1 in the first three months of the year, according to the group’s just-released quarterly review.

That’s up from 11.6 in the same period of 2015, and certainly in keeping with Canada’s angst over record household debt, although down from earlier this year.

To put that into perspective, that put Canada at just about on par with Belgium at 12.2. But only five other countries outpaced Canada of the 42 measured, excluding Belgium, one of them being China, at a stunning 30.1.

While the focus domestically is on household debt, which stands at an elevated 167.7 per cent of disposable income, the BIS measured all credit to the non-financial sector, including loans and other instruments such as debt securities.

Canada got something of a special mention in the BIS text.

“According to the BIS early warning indicators, which are intended to capture financial overheating and potential financial distress over medium-term horizons, credit growth continues to be unusually high relative to GDP in several Asian economies as well as in Canada,” it said in the quarterly report.

Servicing the debt is manageable, of course, given current low interest rates, but that measure would spike if rates climbed by 2.5 percentage points.

“Estimated debt service ratios, which attempt to capture principal and interest payments relative to income, appear to be at manageable levels at current interest rates for most countries, although they point to potential concerns in Brazil, Canada, China and Turkey,” the BIS said.

No matter how you measure it, said Charles St-Arnaud of the Nomura economics group, credit is rising at a much faster pace than gross domestic product.

“This is mainly the result of weaker nominal GDP growth as a consequence of the negative terms-of-trade shock from lower commodity prices, but continued increase in both household and business credit ... also plays a role,” Mr. St-Arnaud said.

“What it tells you is that debt is increasing at a faster rate than income (maybe to compensate for weak income growth, keeping up with the Joneses and buying a more-and-more overvalued house),” he added.

“Nothing new there; it has been the case for years. Like an elastic, it’s being stretched more and more. The questions are: Will it snap? And when?”

General Motors Co. has agreed to a key union demand to protect jobs in its Canadian operations.

As The Globe and Mail’s Greg Keenan reports, GM and Unifor agreed to a tentative labour contract that includes, among other things, a commitment to 2,500 jobs that were under threat in Oshawa, Ont.

The tentative pact, part of pattern bargaining with the Detroit Three auto makers, averted a strike. The main economic parts of that deal will next be taken to Ford and Chrysler to match. 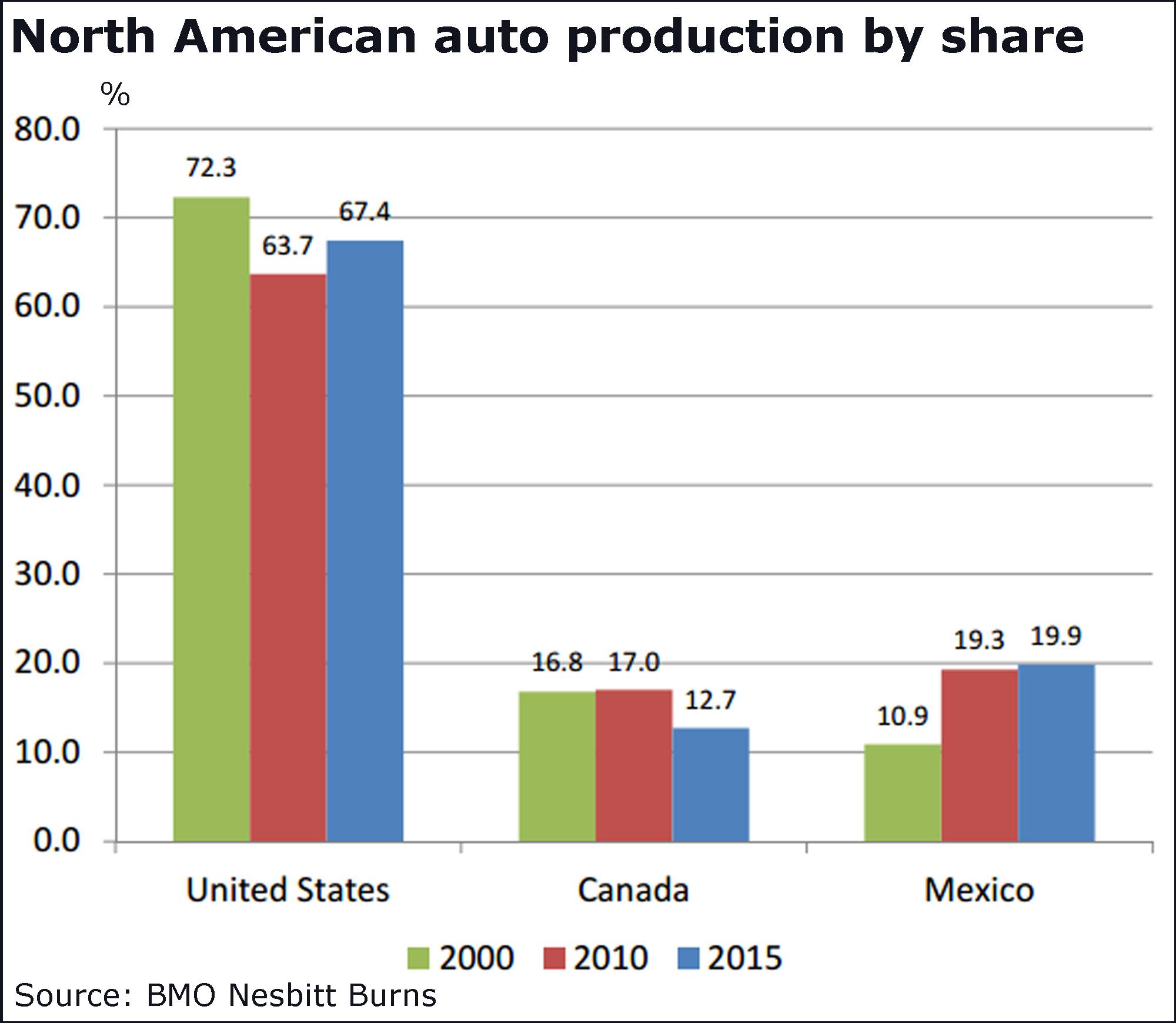 As this chart shows, protecting Canadian auto jobs is a crucial issue.

“Canada has lost close to a four-point share of North American production ... with Michigan and, more importantly, the southern U.S. being preferred locations for investment,” he added.

“Worse yet, these figures actually underestimate the loss in market share from the union’s perspective - they would be much lower if not for increased activity at Toyota and Honda’s non-unionized plants.”

Bank of Canada Governor Stephen Poloz is signalling that a move to raise interest rates will likely be delayed again as the Canadian economy struggles to gain traction, The Globe and Mail’s Barrie McKenna reports.

Mr. Poloz acknowledged that the central bank’s current projection that the economy will get back to full capacity near the end of 2017 may be too optimistic.

“It is quite evident that our economy is still facing strong headwinds, and we need stimulative monetary policy to counteract them and move us closer to full capacity,” he said in remarks prepared for a speech to a group of economists in Quebec City.