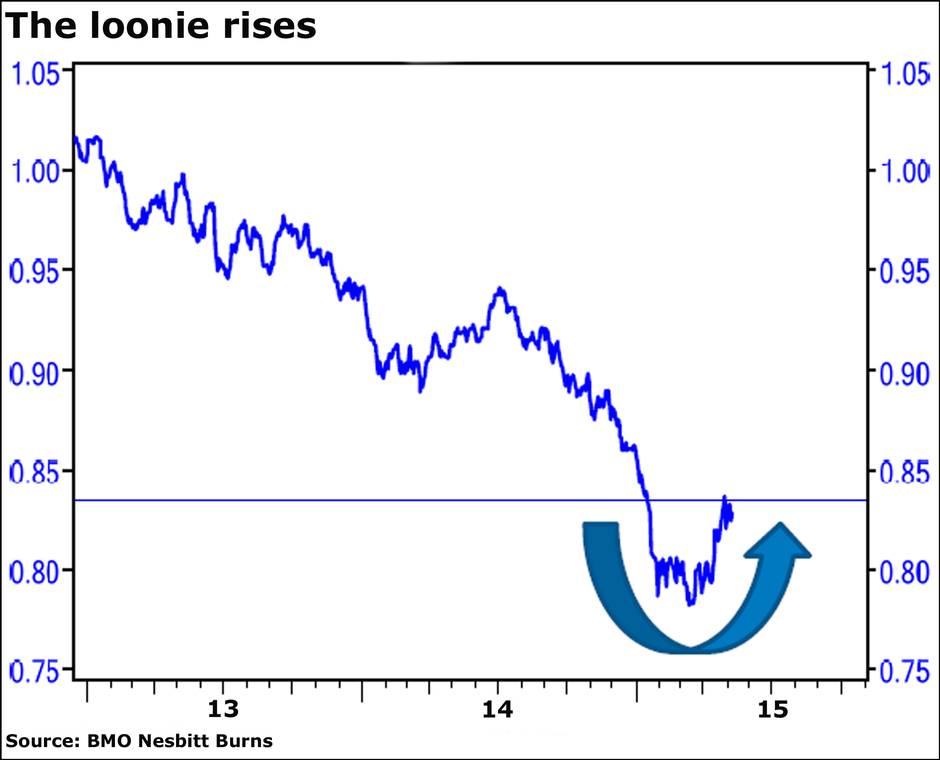 The Canadian dollar is almost back to where it began the year.

But if you’re savouring the suddenly stronger loonie, enjoy it while it lasts.

The Canadian currency, which touched a high of 83.82 cents U.S. and a low of 83.14 cents today, has been climbing along with oil prices.

It has also been buoyed recently by a weaker U.S. dollar and a brighter outlook from the Bank of Canada.

“While a touch below its recent high, the loonie has now gone almost full circle this year, and is now within shouting distance of where it started 2015 (86 cents),” said chief economist Douglas Porter of BMO Nesbitt Burns.

That’s good news for Canadian travellers heading south, and should ease some of the higher prices for imported goods that we’ve seen of late. It’s not the best news, however, for Canadian exporters, whose products are suddenly that much higher when sold into the United States.

But like other observers, Mr. Porter believes the currency will sink again.

He projects the Bank of Canada will continue with its more upbeat message, but that the U.S. dollar will strengthen. And oil prices are the “wild card,” he added in a research note.

“We suspect that, at best, [West Texas Intermediate] will average $60 through the rest of this year,” Mr. Porter said.

“With the U.S. economy and U.S. dollar likely to be rejuvenated in coming months, we look for the [Canadian dollar] to ease back toward the 80-cent level by year-end.”

Trican Well Service Ltd. is in rough shape amid the oil shock.

It said it slashed 2,000 jobs in the first quarter of the year. It cut its “active equipment” in Canada by 35 per cent in March, and “downsized our U.S. pressure pumping operations substantially.”

The company suffered elsewhere in its global operations, as well, and is now negotiating to sell its Russian and Kazakhstan pressure pumping business after an unsolicited offer.

Trican, whose oil and gas services and equipment business operates around the world, had been paying a semi-annual dividend of 15 cents.

“Management has prepared forecasts for the remainder of 2015 and 2016 and forecasts a breach of its interest coverage ratio debt covenant during the second half of 2015 and first quarter of 2016 due to current North American pressure pumping activity and pricing being at cyclical lows,” the company said.

“I hope the United States administration sees that changing the Volcker Rule is in its own best interests and that of its biggest trading partner,” Joe Oliver told a conference in New York, according to Reuters.

He was referring to regulations named for former Federal Reserve chairman Paul Volcker in the wake of the financial crisis that bars banks from certain types of trading with their own money.

Canadian home prices rose in April for the fourth month in a row.

But hold that thought.

Here’s what National Bank senior economist Marc Pinsonneault said today as he released the Teranet-National Bank home price index which showed a rise of 0.2 per cent from March:

“Excluding the recession year 2009, the monthly change is tied with that of April 2013 for the smallest April advance in 17 years of index data. The slightness of the gain in 2015 came from the component indexes for Vancouver and Toronto, which were both flat from the month before and which together account for the 54 per cent of the composite index.”

Vancouver and Toronto, of course, have been the two hot Canadian markets.

On an annual basis, prices rose 4.4 per cent, a slower pace than in March.

“As the much anticipated spring market unfolds, Toronto and Vancouver home prices are expected to remain hot while other markets will likely catch the home-buying fever,” said economist Diana Petramala of Toronto-Dominion Bank.

Some of Europe’s economies are picking up, but there are a couple of sour notes today.

The euro zone economy expanded in the first quarter by 0.4 per cent, according to the Eurostat agency, a better showing than the fourth quarter’s 0.3-per-cent pace.

Among the bigger economies, France had a nice bounce, at 0.6 per cent, and Italy did better than expected at 0.3 per cent, marking its first growth since late 2013.

But the pace of growth in Germany, the powerhouse of the monetary union, slowed to just 0.3 per cent, compared to 0.7 per cent in the last three months of 2014.

Greece suffered, too, sinking back into recession.

“The return to stronger growth across the euro area marks a significant improvement from a year ago and will help to buttress optimism that deflationary forces are ebbing away,” said economists at Société Générale.

“Though the euro area outperformed the U.K. and the U.S. in Q1, there is no reason to get carried away that this will be repeated in Q2.”

Separately, the Bank of England today trimmed its outlook for the U.K. economy, projecting economic growth of 2.4 per cent this year. 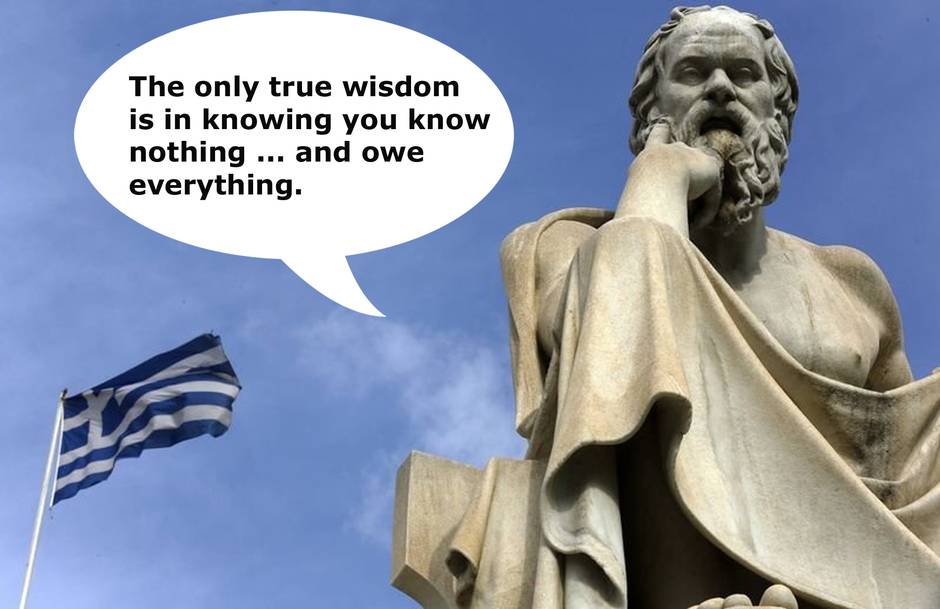 Analysts are raising the spectre of a Greek default as the crisis morphs from dreadful to an “Alice in Wonderland” saga.

That doesn’t mean it’s still not dreadful, just that the latest developments show a government borrowing from the bank to pay off the same bank.

According to several reports, Athens headed off a default by tapping €650-million from its emergency International Monetary Fund reserves so it could make a widely watched €750-million payment to the IMF yesterday.

“Greece was only able to pay the IMF by raiding its emergency reserves at the fund itself and the finance minister has warned that the government can only finance itself for another two weeks. We doubt that a deal can be made in that time.”

She’s not alone in that assessment, as negotiations between Athens and its international lenders have so far proved fruitless.

“Greece has been living hand to mouth for the past five years, and now that the last bailout is due to expire next month there is the very real prospect of a default,” said market analyst David Madden of IG in London.

“The country scrapped together what little free cash it had to meet the latest repayment, and is now living on a shoestring budget. If the Greek government doesn’t meet the demands of its creditors over reform, a default is in the pipeline.”

What’s interesting here is that the finance ministers of the euro zone, meeting in Brussels, had on Monday signalled positive developments.

And markets had heralded Greece’s announcement a day earlier that it was getting its payment to the IMF in the pipeline.

But then investors learned where that payment came from.

“The emergency funds available to all nations that deal with the IMF are legitimate, but it’s doubtful the original intended use of the facility was for countries to pay the IMF itself,” said analyst Jasper Lawler of CMC Markets.

“If anything, the fact that Greece couldn’t find the funds itself shows just how close to the brink it is.”

Which brings us back to the bizarre sequence of events.

“The [Greek crisis] continues to transform itself into an ‘Alice in Wonderland environment, as the ever-more complex web of payments and transfers baffles all but the hardiest of market watchers,” Chris Beauchamp, senior market analyst at IG in London, said in a research note.

A speech too far: What to do if you bomb like Elizabeth May