What the tax did

The evidence to date leaves no doubt that the tax on foreign buyers is doing just what it’s supposed to do to Vancouver home prices.

Here’s how it looks in living colour, courtesy of BMO Nesbitt Burns: 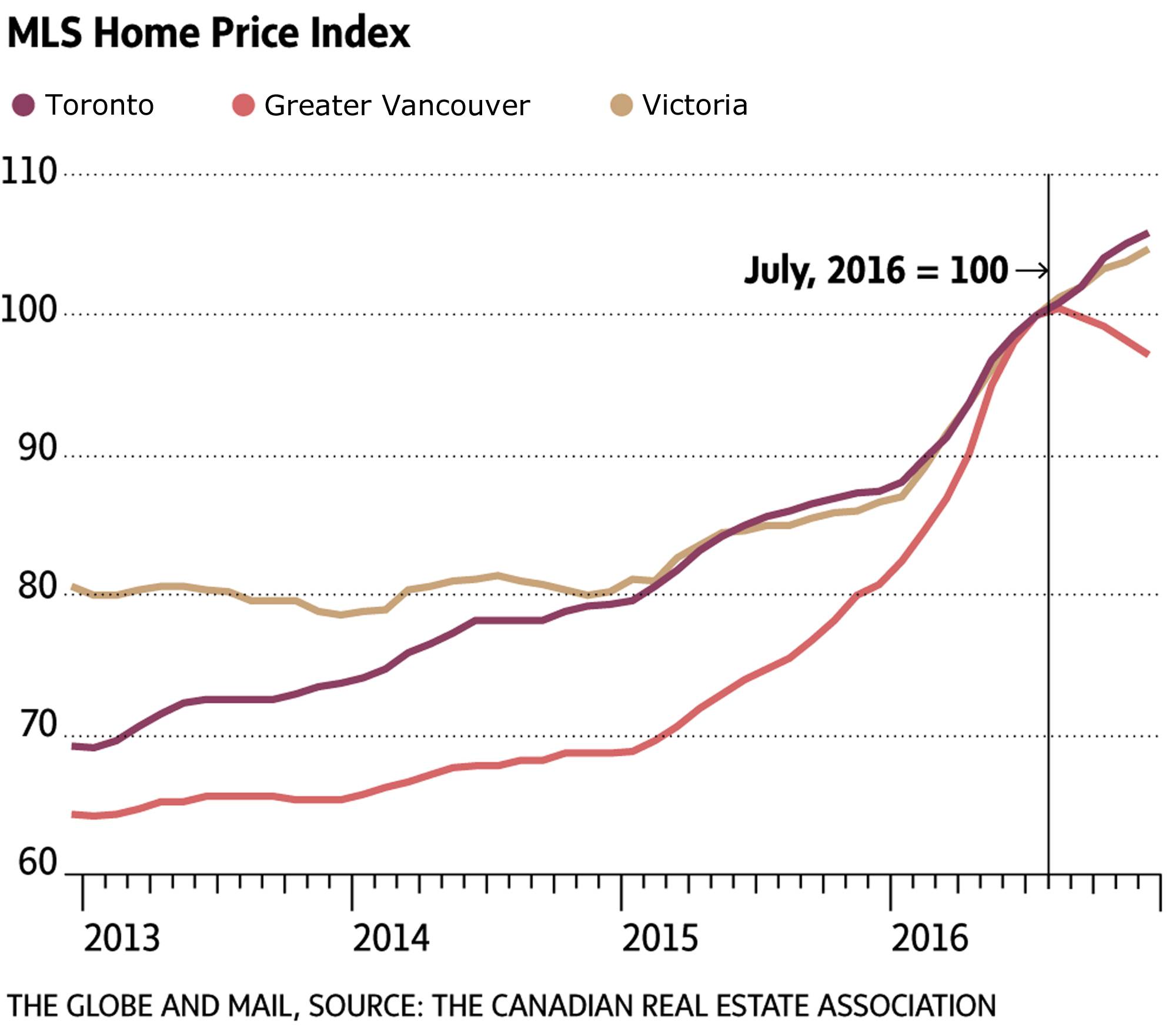 “The vertical line marks the spot at which the non-resident tax went into effect in the Greater Vancouver area,” said BMO chief economist Douglas Porter.

“We have enough history now to distinguish the clear divergence between Vancouver (down) and Toronto (still straight up),” he said in a research note.

“And, in case there was any doubt what force is at play, note that Victoria has tracked closer to Toronto’s behaviour than Vancouver’s (no tax in Victoria either). Note that if we instead looked at average transaction price, the gap is much more extreme.”

The B.C. government brought in the 15-per-cent tax on foreign buyers of homes in the Vancouver area to cool down a market that was raising eyebrows around the world.

Homes in Vancouver were out of reach for many potential buyers - and still are, for that matter - and there were fears of a burst bubble in the making.

The federal government then followed that up with national tax and mortgage changes of its own.

Now, economists project that Vancouver sales and prices will continue to slump this year.

In a just-released look at Canada’s housing markets, Royal Bank of Canada chief economist Craig Wright and senior economist Robert Hogue noting that Vancouver is still “adjusting” to the various policy initiatives, and that poor affordability is still a big issue.

“To date, the market has cooled significantly and home prices are coming under downward pressure; however, a crash is unlikely given still-solid economic underpinnings,” they said.

“Poor affordability is likely among the factors that have contributed to nine straight months of moderation in home resales in the area since a peak was reached in the winter of 2016,” they added.

“Policy changes - including the surprise implementation of a new tax on purchases made by foreign buyers in August - also likely contributed.”

And here’s a key point from the RBC economists: “Downward pressure on prices is likely to dominate in the near term despite recent indications that foreign buyers are returning gradually to the area after moving to the sidelines in the months following the introduction of the foreign-buyer tax.”

Across the country, Mr. Wright and Mr. Hogue see little sign of any widespread slump.

“Affordability-related vulnerabilities continue to be major concerns in Vancouver and Toronto,” they said.

“Such vulnerabilities are now being tempered (somewhat) in Vancouver, however, by rapidly moderating price increase. On the other hand, Toronto is showing increasing signs of overheating.” 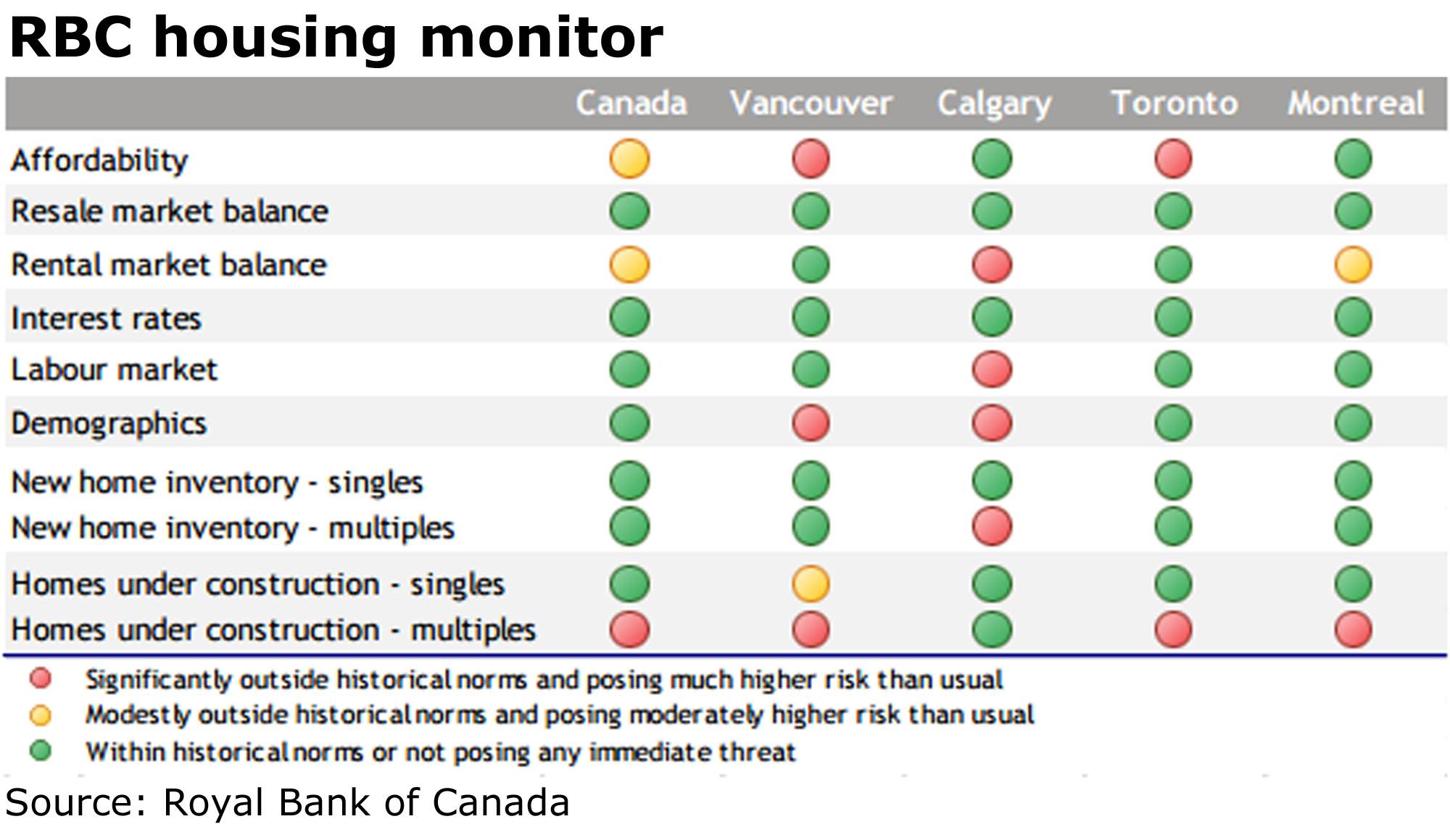 What was it that President Donald Trump said about pharmaceutical companies again? Oh, right, that they’re “getting away with murder” on prices.

Johnson & Johnson has struck a $30-billion (U.S.) deal for some very high-priced drugs with a bid for Switzerland’s Actelion Ltd.

J&J is offering $280 a share in cash, with Actelion first planning to spin off its R&D operations.

“The addition of Actelion’s specialty in-market medicines and late-stage products is consistent with Johnson & Johnson’s efforts to grow in attrtactive and complementary therapeutic areas and serve patients with serious illnesses and significant unmet medical need,” J&J said in a statement.

Several companies are reporting quarterly results as markets continue to eye both earnings and the latest from Mr. Trump.

TransCanada Corp. is racing to resubmit its application for the Keystone XL pipeline after Mr. Trump’s revival of the controversial project, The Globe and Mail’s Kelly Cryderman reports.

“We’re obviously very, very pleased with that announcement, and I can tell you we’re working very hard and diligently to complete that application as quick as we possibly can,” chief executive officer Russ Girling said late Wednesday.

Grafton-Fraser Inc. got court protection from its creditors this week after having racked up debts of more than $100-million, according to documents filed with Ontario Superior Court.

It is now preparing to close some of its 158 stores, liquidate inventory and find a buyer, the filings say.