But relax, says National Bank of Canada, we’re still a “far cry” from where the U. S. was in the runup to the financial crisis.

“Underwriting standards for mortgage debt in Canada have become an issue for many investors following the troubles of an alternative-mortgage lender at a time when home price inflation in Ontario is ahead of fundamentals,” said Stéfane Marion, though he didn’t name Home Capital.

“Fortunately, the Ontario government has recently stepped in with a number of measures to cool its housing market,” Mr. Marion added, referring to a recent tax on speculative foreign buyers and an expansion of rent controls, among other things.

British Columbia has also put a levy on foreign buyers of Vancouver area homes, while the federal government has introduced its own tax and mortgage measures.

“In the meantime, we take solace from the fact that lending standards for first-time homeowners in Canada have remained strict in recent years,” said Mr Marion.

His point, as this chart shows, is that “the share of first-time home buyers with a low credit score on this side of the border recently fell to a multiyear low of 4 per cent.” 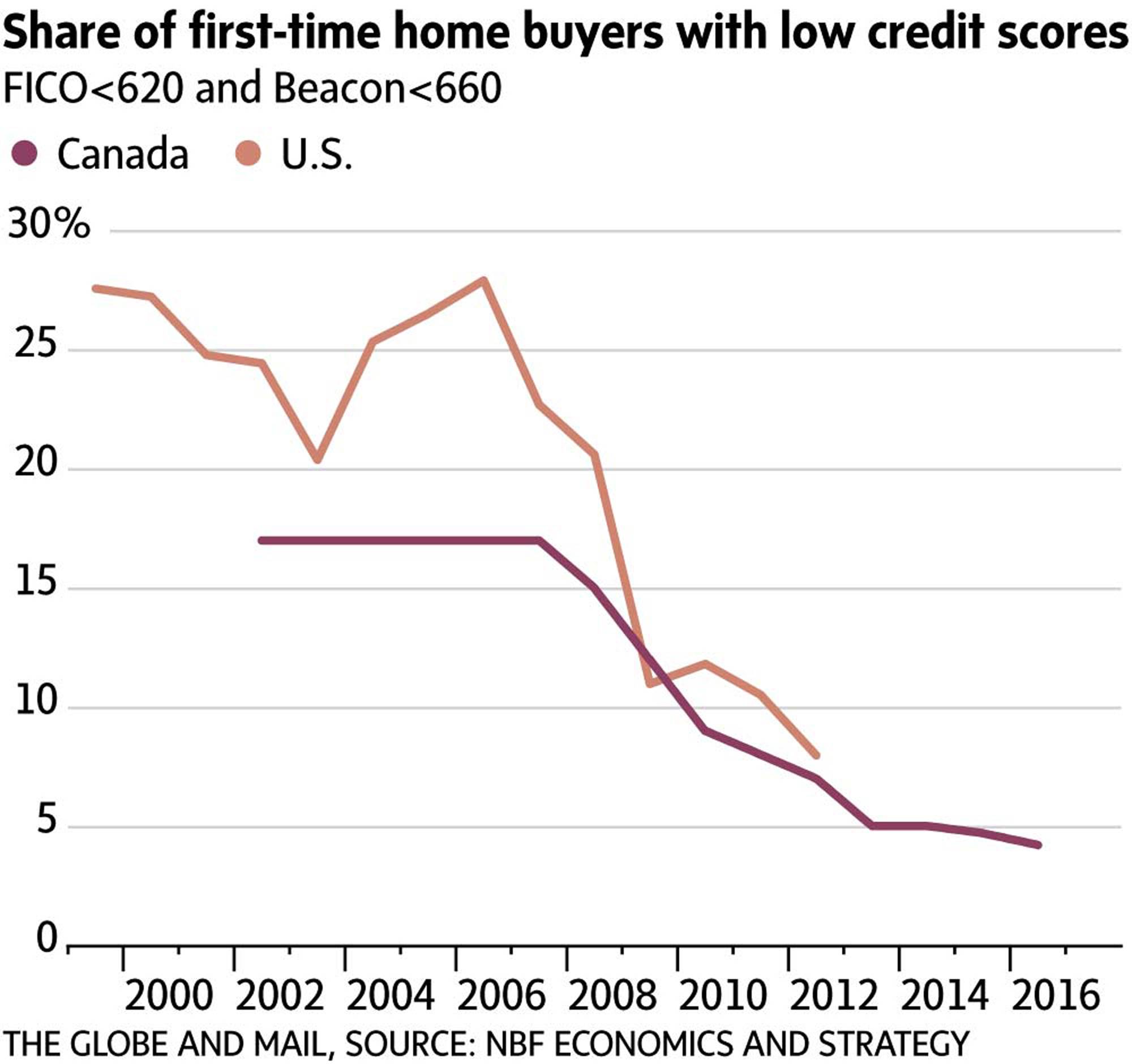 “That is a far cry from the peak of 28 per cent observed in the U.S. at the height of its housing bubble,” Mr. Marion added.

Some of the “froth” is already coming off the Toronto market, said David Rosenberg, chief economist at Gluskin Sheff + Associates, citing a Globe and Mail report.

“Rare is the day that housing bubbles get resolved smoothly but then again, what typically bursts them are central bank rate hikes,” Mr. Rosenberg said.

“And while the Bank of Canada sounded less dovish last week, it seems unlikely that a tightening in monetary conditions is coming any time soon,” he added.

“So maybe it will be left up to shifting tax and regulatory policy to do the job of letting helium out of the balloon.”

As for Canada’s big banks and their downgrade, Mr. Rosenberg noted that four of them have already “smashed through” profit targets in their latest quarterly reports. Not all had reported by the time Mr. Rosenberg released his note to clients.

“Lost in the debate as to their exposure to the local mortgage market is that these institutions are extremely well diversified and their capital markets and wealth management lines of business are doing just fine even as consumer credit growth and housing-related activity softens,” he said.

“Not just that, but lower credit losses were a key factor behind the solid [second-quarter] performance.”

Bank of Nova Scotia posted a stronger second-quarter profit as it announced a share buyback.

The year-earlier period included an after-tax restructuring hit of $278-million. If you adjusted for that, Scotiabank said, profit rose 11 per cent, while return on equity rose to 14.9 per cent from 14.4 per cent.

“This quarter’s results were driven by strong operating performances in all three business lines,” chief executive officer Brian Porter said in an announcing the results.

Scotiabank also plans to buy back up to 24 million common shares, or about 2 per cent of those outstanding.

Canada’s current account is now covered in “red ink,” the deficit swelling by $2.3-billion to $14.1-billion the first quarter.

The international trade balance fell to a deficit of $1.8-billion from a tiny surplus in the first quarter, Statistics Canada said.

The services deficit, meanwhile, rose by $300-million, and the investment income deficit didn’t change all that much.

“There’s a lot of red ink in Canada’s current account, a reason why the recovery in crude prices hasn’t yielded much of a rebound in the [Canadian dollar],” said CIBC World Markets chief economist Avery Shenfeld.

“Canada needs to remind Trump that Canada runs a $5.6-billion quarterly deficit in services, much of that with the U.S.,” he added.

“Markets don’t react much to this series, but its flow of red ink, and a lagging Bank of Canada in terms of rate hikes, are a reason we see the C$ rangebound even if oil stages a further recovery next year.”