As if there isn’t enough going on with Canada’s housing market already, now comes “Trumpflation.”

The impact on Canadian housing could happen in a roundabout way, and there are different scenarios for how it could play out. But we’re already seeing the ripple effect in bond markets.

President-elect Donald Trump’s stimulus proposals are fuelling expectations of stronger inflation, pressing up Treasury yields and, in turn, those of Government of Canada bonds. 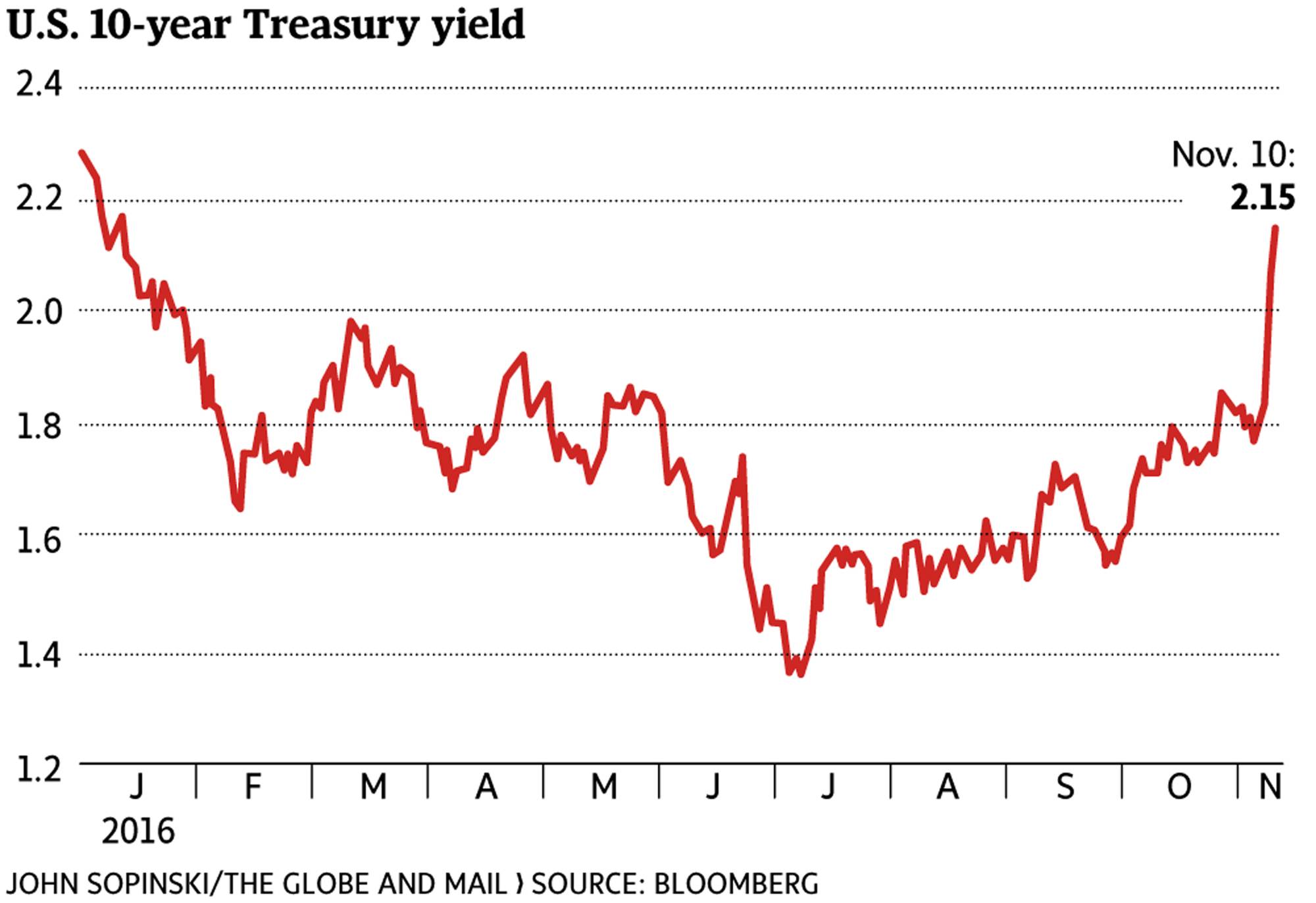 “Bond markets have interpreted a Trump win as one that will make inflation if not great again then at least rise again,” said Toronto-Dominion Bank senior economist Leslie Preston.

“Market-based measures of inflation expectations have reached their highest level since the middle of last year, driven by the prospects for fiscal expansion, as well as the risk of higher inflation due to an increase in trade protectionism,” she added.

“Higher import tariffs, of the sort discussed by Trump during the election campaign, typically raise prices for imported goods for consumers.”

She wondered, though, about just how this will play out; for example, the extent of “fiscal discipline” other Republicans will demand.

“Markets may be getting a bit ahead of themselves, as it very much remains to be seen whether this ‘Trumpflation’ will pan out,” Ms. Preston said. 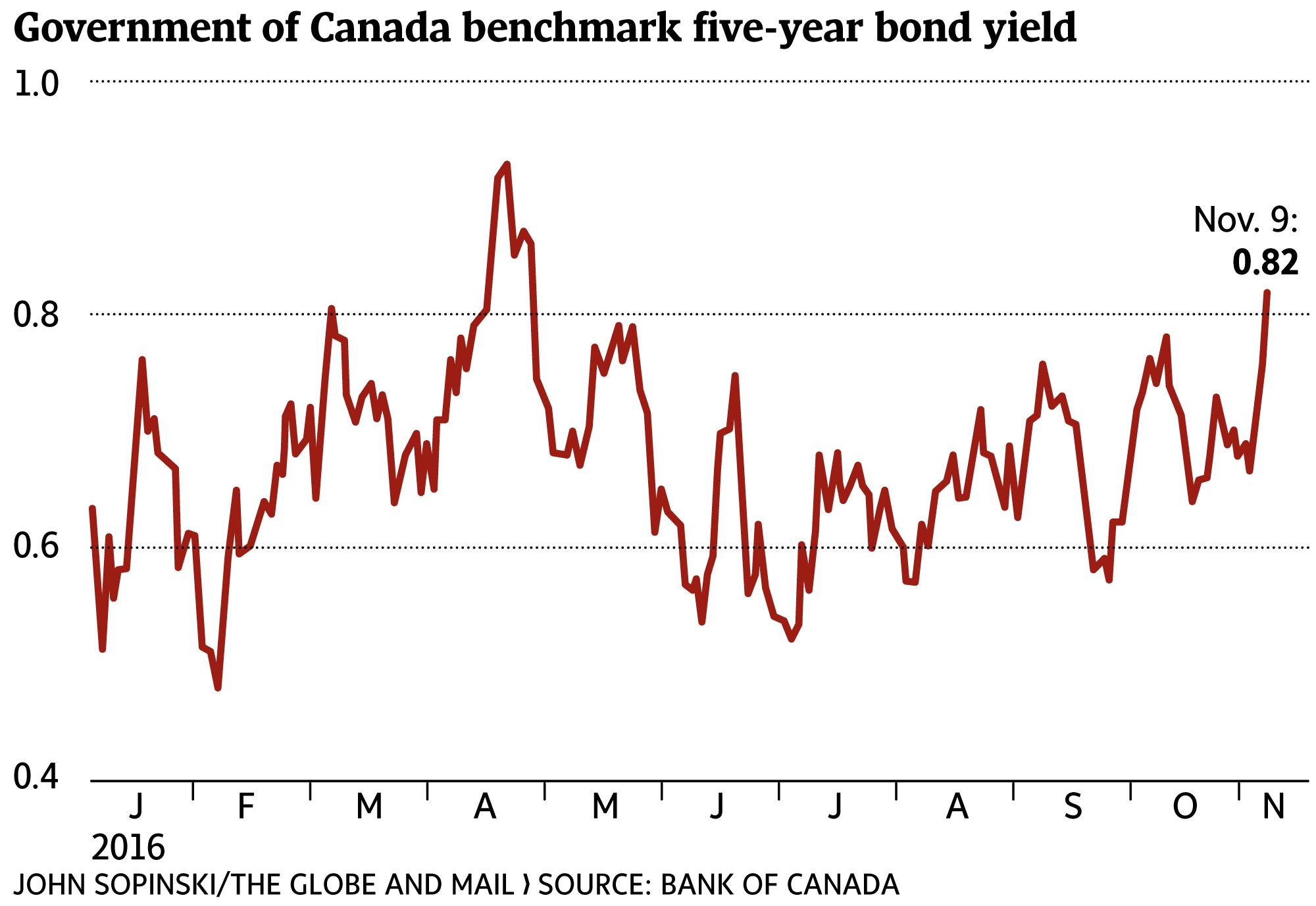 Yields rose in Canada last week, though not to the same extent as in the U.S.

“We did indeed see some upward pressure on GoC yields ... but to a somewhat lesser degree than what we saw in Treasury yields post-election,” said BMO Nesbitt Burns chief economist Douglas Porter.

“And I would expect that underlying trend to be the case for many more months – an underlying upward trend in U.S. yields, with Canada pulled along in tow, but to a lesser extent,” he added.

“The ’lesser extent’ is due to the fact that the Bank of Canada is highly unlikely to hike rates in the foreseeable future.”

There are different scenarios for how this could ripple into Canada, with mortgage rates tied to the bond market.

“For mortgage rates and the housing market, the upswing is unlikely to be significant enough to take a serious bite,” Mr. Porter said.

“However, the point may well be that finally – finally! – the tide may be turning on borrowing costs, and that rates will become a small headwind for housing, rather than the gale-force tailwind they have been for years.”

Of course, Mr. Trump’s policies could also juice the U.S. economy, which is his goal and was behind the surge in stock markets, after some initial fear, in the wake of his victory. Which brings us to a different scenario.

“Given record high household debt levels in Canada, any material increase in bond yields and, in turn, household borrowing costs would be unsettling,” said Mr. Madani, who has been down on Canada’s housing market for years.

“As we have highlighted several times before, Canadian household debt obligations as a share of disposable income are fairly high, despite the current low level of household borrowing rates ... So, any increase in mortgage rates, for example, would cause these debt obligations to grow, clouding the outlook for consumption and investment in the severely overvalued housing market.”

Prime Minister Justin Trudeau is pushing big investors to put their money to work in Canada.

As The Globe and Mail’s Bill Curry reports, Mr. Trudeau and some of senior ministers are spending the day in Toronto with the likes of pension funds, banks and, notably, BlackRock Inc.

Observers say this type of appeal may well be unprecedented in Canada as the Liberal government forges ahead with infrastructure plans to juice the economy.

David Baazov, the former chief executive officer of global online poker company Amaya Inc., has made a $3.48-billion offer to buy the company, The Globe and Mail’s Bertrand Marotte reports.

The $24-a-share offer comes more than nine months after Mr. Baazov first announced his intention to take the company private with a group of investors.

Amaya did not immediately respond to the offer. It announced adjusted net earnings of 42 cents (U.S.) per share for the third quarter, compared with 35 cents in the year-earlier period, on revenue of $270.8-million, up from $247.3-million.