These are stories Report on Business is following Monday, April 28, 2014.

Keystone and the dollar
To borrow a movie title and now oft-heard phrase, a Canadian currency analyst has what may be an inconvenient truth for TransCanada Corp.: Its controversial Keystone XL pipeline may no longer be as crucial as it once was.

In a recent report, senior currency strategist Greg Moore of Royal Bank of Canada was actually examining the effect of energy exports, and Keystone in particular, on the Canadian dollar.

"Energy exports are important to CAD through their impact on Canada's current account balance, terms of trade, and capital investment," said Mr. Moore, referring to the currency by its symbol.

"While Keystone XL is still a very relevant and important project, it no longer appears to be as crucial as it once did to shaping Canada's energy export future. Its impact on CAD has thereby likely diminished."

Keystone XL, of course, is the oft-delayed project that has become a political football and target of environmental activists in the United States.

Canada has been pushing hard for approval of the project, a $5.4-billion pipeline that would carry almost 850,000 barrels of oil from Canada and the northern U.S. to the refining hub on the Gulf Coast.

As The Globe and Mail's Shawn McCarthy has documented, a decision now probably won't come before the U.S. congressional elections in November.

"The project has long been considered one of the few shorter-term solutions, preferred especially because it would bring Alberta's heavy oil director to the refineries of the U.S. Gulf Coast, where most crude imports from other foreign countries are currently refined," he added.

But amid the years of wrangling, oil companies have not "been waiting idle" for the project's approval, particularly in the last year, and have scrambled for alternative methods of delivery, notably rail.

"More impressive are the proposed capacity additions for this year, which are set to create capacity of up to 750,000 barrels a day," Mr. Moore said.

Barrick-Newmont talks end
Newmont Mining Corp. is blaming Barrick Gold Corp.'s incoming chairman John Thornton for the dissolution of their merger talks, saying that the "respectful" relationship necessary to realize the potential benefits does not yet exist.

In a letter to Barrick's board and Mr. Thornton, who is currently the Canadian miner's co-chairman, Newmont called the former Goldman Sachs banker unconstructive, The Globe and Mail's Rachelle Younglai reports.

"While our team has found your management team's engagement to be constructive and professional, the same constructive nature cannot be said of our discussions with your co-chairman on certain fundamental strategic and structural issues over the past two weeks," Newmont's chairman Vincent Calarco said in the letter, dated April 25.

Barrick shot back, however, saying the two companies had negotiated a term sheet in early April, but that Newmont has "sought to renege" in three areas, including the location of the head office in Toronto, identification of specific assets to be spun off, and certain governance arrangements.

Barrick had been trying to renew talks with Colorado-headquartered Newmont last week, a source had said.

Pfizer rebuffedd
For AstraZeneca PLC, a takeover by Pfizer Inc. is too bitter a pill to swallow at this point in the game.

Pfizer, the American pharmaceutical giant, disclosed today that it approached its rival about the possibility of a merger valued at almost $100-billion (U.S.), but was rebuffed after "limited high-level discussions" that ended in mid-January.

AstraZeneca said today, in response to the Pfizer announcement, that the offer "very significantly undervalued" the company and its outlook.

"AstraZeneca's share price has performed strongly and consistently since late last year as AstraZeneca has continued to deliver on its clearly stated strategy, in particular the strengthening of its diabetes franchise and the progression of its oncology pipeline," the company said.

Bank of America shares sink
Shares of Bank of America Corp. sank today after the U.S. bank suspended its $4-billion (U.S.) stock buyback plan and a hike in its quarterly dividend.

The bank today disclosed a "downward revision" to its regulatory capital amounts and ratios because of what it said was a faulty adjustment related to how it treated certain structured notes it got in its takeover of Merrill Lynch & Co. in 2009.

Bank of America said it alerted the Federal Reserve when it learned of the issue and, thus, suspended its capital plans at the request of the U.S. central bank.

It will resubmit plans, it added.

Among what it had planned was the stock buyback program and an increase in its quarterly dividend to 5 cents from a penny.

Growing unease
Mounting controversy over the Temporary Foreign Workers program and unpaid internships highlights how the system as we knew it is breaking down, at least in some quarters.

But here's how it is playing out: Some companies instead want cheap or free labour in these exceptionally uncertain times.

This comes at a time when youth unemployment is raging at more than 13.5 per cent, and national unemployment is just shy of 7 per cent. More than 1.3 million people can't find work, about 385,000 of them young Canadians. Wage hikes, in turn, are running at just more than 2 per cent, compared to what Bank of Montreal research shows would normally be about 3 per cent at the current jobless rate.

First, let us not tar everyone with the same brush, and remember that investigations into alleged abuses have yet to be completed.

But to recap, federal Employment Minister Jason Kenney is cracking down on the TFW program, a scheme meant for companies that can't find Canadians with the right skills. (Like how to flip burgers.)

At the same time, the province of Ontario is moving against unpaid internships.

Where the TFW is concerned, Canada has shut down some parts of the program for now. McDonald's Corp., the fast-food company at the heart of the current controversy, though not alone, has suspended use of the scheme while an independent audit is conducted.

At the same time, though, the CBC says that it got its hands on the recording of a conference call during which John Betts, the chief of McDonald's Canada, reportedly told franchisees that the "attack" on the fast-food chain is "bullshit."

In a statement, McDonald's did not address the comment in question, saying that it was a "confidential" call. It did, however, express its sincere "regret" if anyone was offended by the comments.

"McDonald's Canada has built a strong reputation for being open, honest and transparent in all our communications and dialogue with consumers," the company said, adding it moved quickly and aggressively to probe allegations and would not tolerate abuse of the system.

"We do not shy away from accepting responsibility and taking ownership in areas where we can do better. We recognize that we have work to do to make things right with regard to our use of the Temporary Foreign Worker program."

Then there's the question of unpaid internships, which Toronto law professor David Doorey describes as "surprising complicated" given the issues.

"On the one hand, employers could easily exploit a law that permitted them to simply call people interns and thereby avoid employment standards laws," the York University professor said.

"Also, unpaid interns could replace real jobs, which is not good for the economy," he wrote this weekend in his Law of Work blog.

"On the other hand, the state wants young people to gain work experience, and some employers who would not otherwise provide workers with experience to develop skills might allow interns to gain some experience by hanging around the workplace if they don't have to pay them. Therefore, the state is trying to write a law that protects against the first two 'bad' aspects of internships while permitting the third 'good' aspect. Try writing a law that does that."

While the issues are complex, "I suspect there are a lot of employees in Canada being improperly called 'interns' by their employers," he added.

Bank of Montreal's chief economist has yet another take on all of this.

"Yes, weak productivity is a problem, but the currency has been the competitive killer." 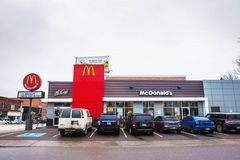