Economists are divided over whether Canada’s housing market crackdown may be too wicked or too wimpy.

One thing is certain: Policy makers are in uncharted waters when it comes to taming the “Terrible Two” of Vancouver and Toronto., as BMO Nesbitt Burns dubbed the cities whose home prices have surged.

“This is the sixth time in eight years that the government has implemented stricter mortgage regulation, with activity declining 6 per cent on average in the four quarters subsequent to their implementation,” said Toronto-Dominion Bank economist Diana Petramala, referring to new mortgage insurance rules and tax measures unveiled last week as Finance Minister Bill Morneau moved to cool overheated markets.

“The rules ... could take a bigger bite out of activity next year given their breadth and the fact that they are being introduced at a time when many markets have become increasingly sensitive to any shocks.”

BMO chief economist Douglas Porter makes no bones about it: Something had to give in the Greater Toronto Area, where sales and prices have gone beyond what the economy can justify.

“While many analysts, and some officials, argue that ’we need more data’ before acting, or ’the evidence is only anecdotal,’ the reality on the ground is that prices continue to spiral nearly out of control and far beyond income growth,” Mr. Porter said.

“It’s the modern-day equivalent of Nero fiddling for data amid the raging inferno of GTA housing prices.”

Vancouver had already been cooling, even before the federal measures and a new 15-per-cent tax on foreign buyers of area homes, who are believed to be helping to drive up prices.

We’ll get more information later this week with the release of the Teranet-National Bank home price index.

Are the rules too wicked?

The impact will be felt far beyond Vancouver, Toronto and the communities that surround them.

Among other things, as The Globe and Mail’s Rachelle Younglai reports, the measures will hit first-time buyers, in particular. Of course, they were already priced out of the Vancouver and Toronto markets.

There will also obviously be an impact on the real estate industry, which Finance Canada believes could suffer a hit to home sales of as much as 8 per cent in the first 12 months.

A key question is how deep the retrenchment could go.

Paul Ashworth, the North American economist at Capital Economics, fears it could be deep. 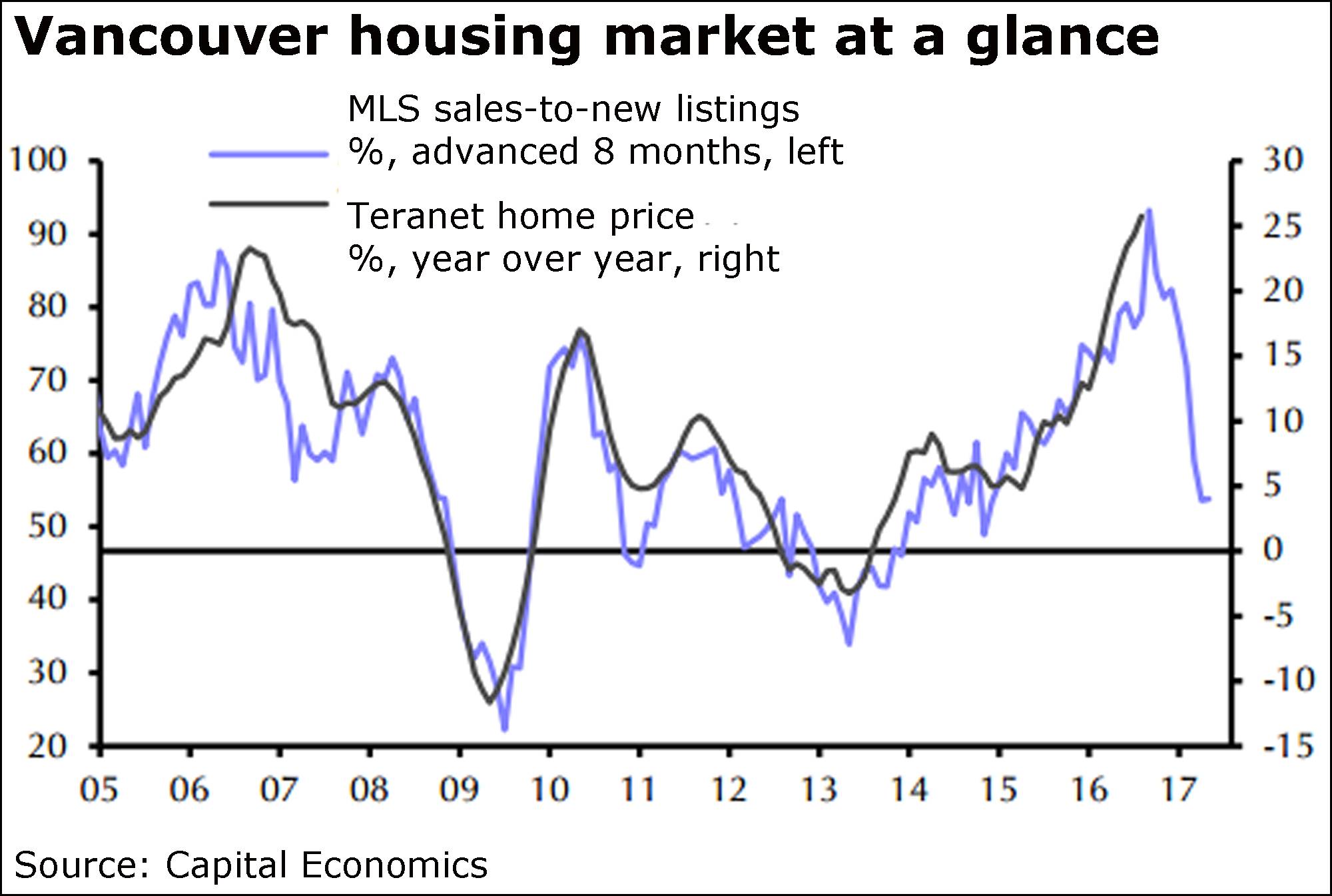 Mr. Ashworth, whose group has been down on Canada’s housing market for some time, said there should be no worry about an actual fall in Vancouver prices. You’d expect the pace of increase to slow sharply but not actually decline. Yet.

“Unfortunately, after such an unprecedented surge in home prices, the chances of a soft landing like that are fairly small,” he said.

“The much more likely scenario is that the latest tightening of mortgage rules, announced last week, will trigger an even deeper slump in home sales, which will eventually lead to a sharp decline in prices.”

Among other measures, borrowers will now have to qualify for mortgage insurance at whatever’s higher, the contract rate or the posted conventional five-year rate that is currently more than 2 percentage points higher.

The “seismic shift” in the new rules came in the area of how Ottawa insures mortgages, both high-ratio loans and mortgage-backed securities that bundle low ratios, or those whose loan-to-value measure is below 80 per cent, Mr. Ashworth said. The latter enabled non-bank lenders to grab an increasing share of the market.

Now, given the expansion of mortgage stress tests, those at the low ratio will have to meet the same test, which Mr. Ashworth argued will kill government-backed securitization in the two cities.

Now, that couple could only look at a home valued at $677,000 because they have to qualify at a higher fixed rate with a shorter maximum amortization of 25 years.

Added to that is the $1-million cap on mortgages, given that the average price of a detached home is now $1.6-million in Vancouver and $1.3-million in Toronto.

Those mortgage-backed securities now stand at $440-billion, or a hefty 30 per cent of outstanding mortgages, Mr. Ashworth said, citing the good and the bad of the changes.

“It is unquestionably good for taxpayers, who will no longer be on the hook in the event of a housing collapse (except for the existing $440-billion!),” he said in his report.

“But it could be very bad for the housing market. It is possible that lenders will simply decide to forego mortgage securitization and use their own balance sheets to continue offering ridiculously low interest rates and long amortization periods on what would then be uninsured mortgages.”

“It’s still too early to tell how impactful these rules will be on housing activity, but for now, we see only a temporary, modest slowing of the housing sector for a few reasons,” said Emanuella Enenajor, the North America economist at Bank of America Merrill Lynch.

Her reasons: Earlier measures have already “weeded out” low-quality borrowers, and aggressive lending isn’t the problem to begin with.

Not only that, it’s uncertain as to whether closing a tax loophole, meant to stem the flow of foreign money, can work, “particularly if foreign investors are able to evade the rule by finding others to purchase properties on their behalf or if the rule is based on self-reporting.”

Moody’s Analytics economist Adam Goldin agreed that the tax changed aimed at foreign buyers “will likely have a minimal impact on the pace of price gains,” though the expansion of the stress test should help.

As in, just right.

Mr. Porter’s colleagues at BMO, senior economists Sal Guatieri, Robert Kavcic and Benjamin Reitzes, believe it could do the trick.

“The new mortgage rules will pour a bucket of ice water on a quickly cooling Vancouver housing market, and should take some steam out of the piping hot Toronto market,” they said in their study.

“Lower-priced regions, including depressed Alberta and Saskatchewan, should be less affected than the Terrible Two,” they added.

“Longer-term, by reducing the risks of a destabilizing price correction and a sharp retrenchment in household spending, the new rules should help sustain Canada’s economic expansion.”

They believe two of the new rules will have a marginal impact, but the change to qualifying for a mortgage, at more than 2 percentage points higher, is another matter.

“It’s hard to say exactly how many borrowers will be affected, as some will settle for a smaller mortgage and lower-priced house. But the pool could be deep.”

It would still be okay in a city such as Ottawa, which they see as a typical market. For Vancouver and Toronto, where benchmark prices are more than 11 times and eight times income, respectively, not so much.

“The higher qualifying rate raises carrying costs for the typical family in Vancouver from an already high 65 per cent of income to 79 per cent,” said Mr. Guatieri, Mr. Kavcic and Mr. Reitzes.

“Most buyers will even be turned away from Vancouver’s condo market, as carrying costs will rise from 39 per cent to 47 per cent,” they added.

“For those buyers who were already pressing up against the limits of the carrying-cost ratio and still want to buy, they will need to settle for a mortgage on a home that’s 17-per-cent lower priced than before the rule change. This could push more buyers to the outer rim of the metro region.”

It’s a bit different in Toronto, where the typical house carrying cost would rise to 59 per cent of income from 49 per cent, though for a condo would be “still below the radar” as that cost rises to 36 per cent.

Which means, the BMO economists said, that “condos are virtually the only game in town for most families looking to buy within the GTA.”

Troubles at Samsung Electronics Co. are mounting by the day as it stops producing and selling its Galaxy Note 7 smartphone and its shares tumble.

Samsung halted sales and told Note 7 users to shut them off amid reports of fires.

“Because consumers’ safety remains our top priority, Samsung will ask all carrier and retail partners globally to stop sales and exchanges of the Galaxy Note 7 while the investigation is taking place.

Those using the phone, or a replacement Galaxy Note 7, should “power down and stop using the device,” the Canadian unit said.