Toronto is leading the country in sales of luxury real estate, a new report says.

Of course, you’ve got to define luxury.

Which Sotheby’s International Realty Canada does in today’s report on how the top-tier markets fared in the first half of the year.

Luxury had been taken to mean more than $1-million, which is interesting given that the average price of a detached home in Toronto is almost $1.1-million. But Sotheby’s gave a nod to what’s happening in the market, changing the price point for what’s deemed luxurious.

Toronto led the way with sales of $1-million or more homes surging 56 per cent in the first six months compared to the same period last year.

Vancouver was next at 48 per cent, while Montreal chalked up a gain of 20 per cent.

“Both cities face growing domestic and international demand for top-tier housing, along with inventory shortages in prime neighbourhoods, particularly for single-family homes,” Ross McCredie, chief executive officer of the company, said in a statement.

“These two cities are set to lead Canadian luxury residential real estate in the coming months.”

In Calgary, where the oil shock has driven down the market, such sales plunged 36 per cent.

Given the unrelenting rise in Toronto and Vancouver prices, Sotheby’s also reset the bar.

“As the benchmark price of conventional real estate continued to rise, surpassing $1-million for many product types in these two markets, the entry price point for luxury housing also increased,” Sotheby’s said.

“As a result, performance of the luxury market in the [Greater Toronto Area] and Vancouver is better indicated by the sale of properties in the $2.4-million and $4-million-plus range, in which both markets saw significant gains.”

In Toronto, sales of homes over the $2.4-million mark rose 46 per cent, while those topping $4-million climbed by “a notable” 72 per cent.

The respective numbers for Vancouver were 52 per cent and 71 per cent. 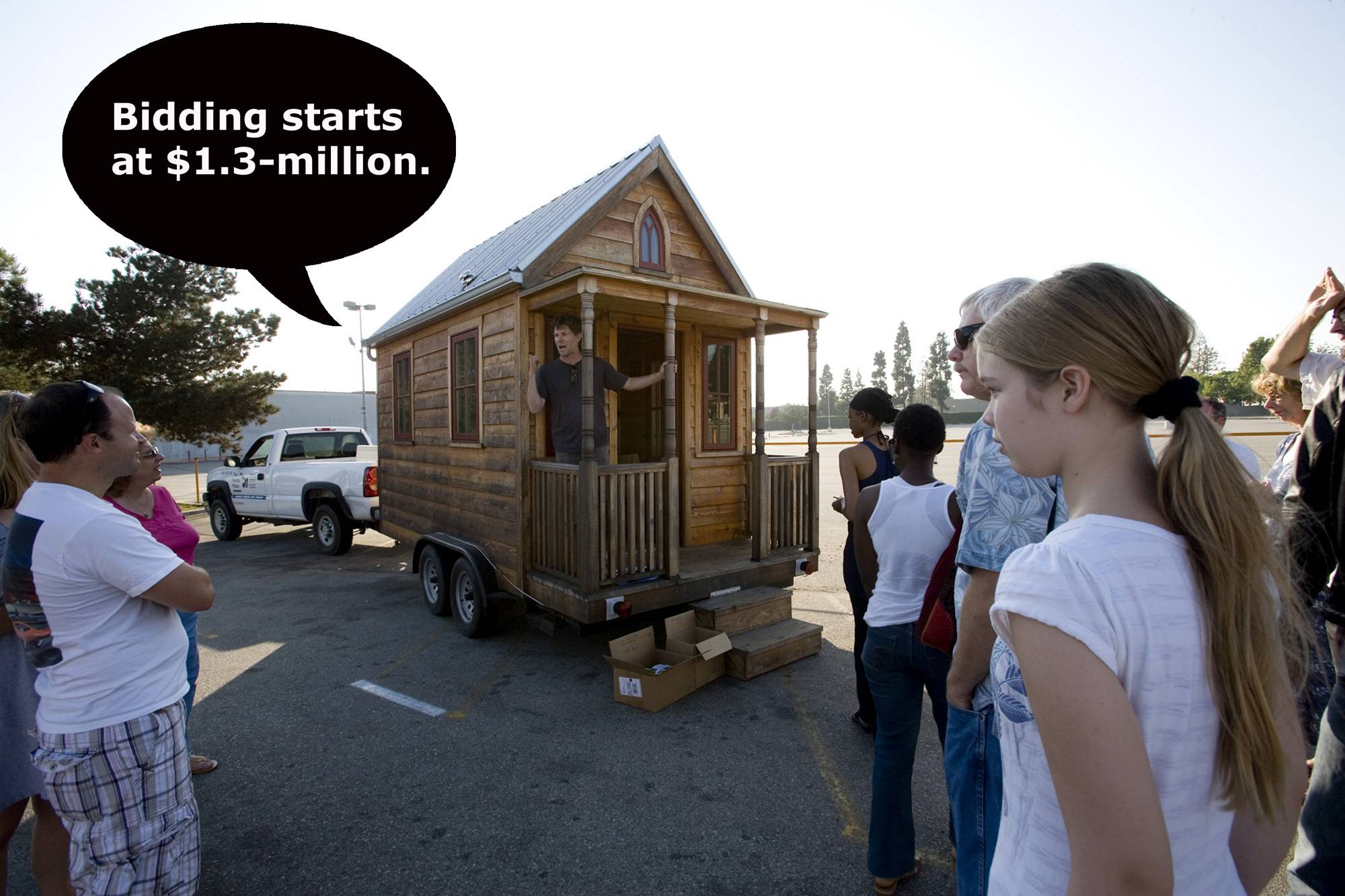 Video: Could this be China's 1929 market moment?

Chinese stocks perked up today in the wake of the extraordinary measures taken by authorities to prop up the market.

There’s a big caveat with that, though.

“China has bought itself a temporary respite ... with markets rallying on news of government instructions to major shareholders to hold off on share sales,” said Chris Beauchamp, senior market analyst at IG in London.

“If this is followed up by fresh liquidity measures then further panic selling may be averted, but the turmoil of the past week is a salutary reminder that the still-immature Chinese equity market is not an area for the faint-hearted.”

The Shanghai composite rallied 5.8 per cent, and Hong Kong’s Hang Seng 3.7 per cent.

“Near-term risk remains skewed to the downside here, however, as the demand outlook looks shaky in the face of a slowing Chinese economy,” she added.

“One also has to question the compass of mind of the Chinese authorities in relation to the ban on stock sales. We have now seen everything thrown at this equity market volatility bar the kitchen sink.”

The International Monetary Fund has again cut its projection for both Canadian and global economic growth this year, citing the unexpectedly weak North American performance early in the year and the slump in energy investment brought on by the oil price shock.

In its latest World Economic Outlook Update, the IMF forecast global growth for 2015 at 3.3 per cent, The Globe and Mail's David Parkinson reports.

It pegged Canadian growth this year at a thin 1.5 per cent, down from 2.2 per cent in its April forecast, while nudging its 2016 forecast up to 2.1 per cent from 2 per cent.

Greece got a one-day break from the headlines as China’s market melted down yesterday, but Prime Minister Alexis Tsipras is back in the spotlight today.

Mr. Tsipras and his bargaining team are racing against the clock to present a new proposal to creditors after Sunday’s referendum and before another emergency summit of EU leaders on the weekend.

“Equity markets have rebounded this morning, with evident relief among investors that the Greeks have actually managed to submit their loan application,” IG senior market analyst Chris Beauchamp said of the latest bid for funding from Athens.

“Now we have to wait for the creditors to decide whether Athens has made enough concessions,” he added in a research note.

“Signs of unhappiness at the proposed deal could easily reverse the good feeling seen so far this morning ... Having stared into the abyss, there may now be just enough willingness to strike a deal that will take the Greek problem off the agenda for a few months, at least.”

Cineplex Inc. shareholders got a dividend hike of 4 per cent, and I’m getting 27.3 per cent less pop.

Hey, how fair is that?

Cineplex has decided to downsize its soft drinks at theatres across Canada, though not the price.

“These sizes are more reflective of what our customers want, as well based on testing of these changes over the past two years,” a Cineplex spokeswoman said.

“Additionally, we have not increased ticket prices or concession prices in any meaningful way for years and have dealt with the added operating costs by trying to gain more operating efficiencies and through the use of added technology where possible,” she added.

“It is always a last-case scenario to increase prices for us.”

The movie chain also put the blame - if you want to call it that, and I do - on the new Making Healthier Choices Act in Ontario, which comes into effect in a couple of years and demands that food service establishments display calories.

“We’re making a change to help prepare for that,” a spokesman told the Canadian Press.

I scanned the new act, Bill 45, and it indeed says just that, along with a bunch of other things.

I also looked specifically, but couldn’t find, any recommendation for smaller sizes at the same price.

Cineplex also cited its higher costs, adding that it has been working to make things consistent - what it offers, their sizes, etc. - across the number of old companies, such as Famous Players, Cineplex Odeon and Galaxy Entertainment, that now make up the business as it is.

“During this time, many other factors have come into play including significant increases to our costs including minimum wages increases to the tune of a 25 per cent plus increase over the past few years with future planned increased still to come,” the spokeswoman told me.

So costs are up but so, too, are concession revenues, or the money we spend for things like pop and popcorn.

They’re not just up. They’re at record levels.

In its last quarterly report, when it announced the annual dividend hike to $1.56 from $1.50, Cineplex boasted of record first-quarter food service revenue of $90.8-million, up $3.6 million from a year earlier.

Chief executive officer Ellis Jacob lauded the results at the time, adding that he was “excited about the strategic opportunities ahead.”

He didn’t cite the pop downsizing as one of those opportunities.

So the bad news is that there won’t be as much to quench your thirst from salty popcorn.

The good news is that you won’t have to pee as much.

Housing starts across the country rose in June to an annual pace of 202,818 units, up from May’s 196,981 and defying the projections of economist who had predicted a drop, Canada Mortgage and Housing Corp. said today.

Citing the six-month trend, CMCH’s chief economist Bob Dugan said construction starts on multiple units, such as condos, is offsetting a “downward trend” for singles. But that’s expected to moderate, he added.

“We expect the housing market to keep its recent pace for the rest of the year and into 2016, though because we won’t see an acceleration, home building isn’t likely to be a meaningful source of economic growth going forward,” said economist Nick Exarhos of CIBC World Markets.

Chart of the day: Come visit us. Please 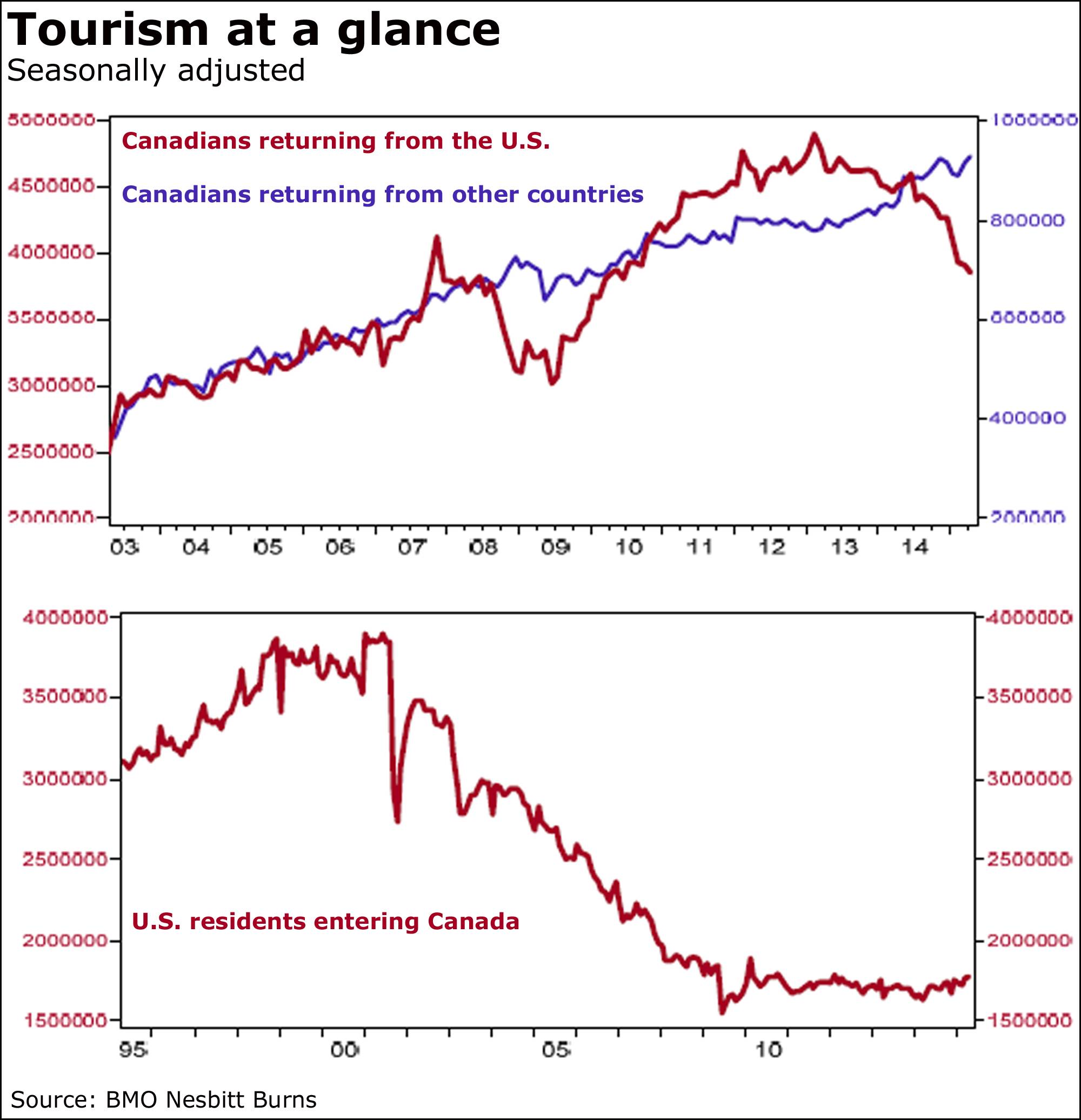 Canadian tourists to the United States are hunkering down as their buying power shrinks with the erosion of the loonie.

Unfortunately, Americans aren’t flocking north despite the fact they can buy that much more.

Interestingly, though, Canadians are finding they can still see the world.

Over the past two years, noted BMO Nesbitt Burns, the number of Canadians travelling to the U.S. has declined by 16 per cent.

“This is mirrored by a similar percentage increase in the number of trips to other countries (where the loonie has more or less retained its spending power),” said BMO senior economist Sal Guatieri.

“However, because four times as many Canadians still visit the States than other countries, the total number of foreign trips is down 12 per cent ... which is one of the few bright spots in an otherwise bleak trade picture,” he added in a recent research note.

On the other side of the ledger, or border as it may be, the 1.8 million Americans who travel to Canada each month “remains depressingly low, despite a 20-per-cent increase in their spending power,” Mr. Guatieri said.

Percentage of Canadians polled by CIBC who haven’t talked about inheritance with the beneficiaries.