These are stories Report on Business is following Tuesday, March 3, 2015.

The chief North America economist for Capital Economics was referring to today's report from Statistics Canada, which showed gross domestic product expanding at an annual pace of 2.4 per cent in the fourth quarter of 2014.

Not only that, the third-quarter showing was revised up to 3.2 per cent.

But observers believe the oil crash has yet to show up in this key economic measures, but will at some point, and that growth is poised to slow markedly, putting the country on course for two moderate years.

"This represents the calm before the storm, i.e. before the full extent of the slump in energy prices begins to feed through," Mr. Ashworth said in a report titled "Q4 GDP growth as good as it gets."

The report, which drove up the Canadian dollar, showed most of Canadian industry boosted production in the fourth quarter, while consumers did their part by spending more, though at a slower pace. Government spending also played a role, though businesses lagged on investment and exports slipped. And much of the strength came from a build in inventories.

Still, it's the final piece in the puzzle and suggests that the Bank of Canada won't follow January's surprise rate cut with another one tomorrow.

In December alone, the economy grew by 0.3 per cent, though the oil bite began to show. And for 2014 as a whole, the economy expanded by 2.5 per cent.

Mr. Ashworth isn't alone. Many other economists also expect that 2015 won't be a repeat.

Here are some comments:

"The twin GDP reports are encouraging and highlight that the Canadian economy was doing pretty well even amid the initial drop in oil prices. However, that strength isn't expected to last, with the early 2015 data likely to soften." Benjamin Reitzes, BMO Nesbitt Burns

"Over all, there is not much in the report that would provide comfort to the Bank of Canada (BoC), especially as most of the impact from the drop in oil prices should be evident in Q1. We continue to believe the BoC will need to cut rates later this year, but will leave them unchanged at tomorrow's meeting." Charles St-Arnaud, Nomura Securities

"Although Canada's economy ended 2014 in reasonable shape, that's water under the bridge for the Bank of Canada's decision-making as it decides how much protection is needed to offset the drag from oil's fall … And even if a revision to Q3's growth pace to 3.2 per cent from 2.8 per cent meant that growth in the back half of 2014 came in hotter than what the bank had initially forecast, the true damage to the Canadian economy caused by crude's collapse will only be understood in upcoming data releases given the lags involved in employment and capital spending." Avery Shenfeld, Nick Exarhos, CIBC World Markets

"Nominal GDP (+0.1 per cent) posted the weakest advance since the second quarter of 2009. This weakness was largely the result of a decline in prices (-2.4 per cent), as export prices (-6.2 per cent) fell off a cliff due to lower oil prices and a weaker loonie. Meanwhile, corporate profits (-11.3 per cent) also took a plunge in Q4, following five consecutive quarterly increases. At the same time, employment earnings (+2.1 per cent) posted their weakest quarterly advance in more than a year and the second weakest since 2009." Randall Bartlett, Toronto-Dominion Bank

Scotiabank boosts payout
Yet another Canadian bank has hiked its dividend.

Bank of Nova Scotia became the latest today, boosting its quarterly payout by 2 cents to 68 cents, The Globe and Mail's David Berman reports.

That came as Scotiabank posted a 2-per-cent gain in first-quarter profit, to $1.73-billion or $1.35 a share, falling shy of the estimates of analysts, who had called for $1.38.

A new BlackBerry
I can't live without my BlackBerry keyboard, but the company thinks others can.

BlackBerry Ltd. today launched a new device, aimed at the middle of the market, called the Leap, which has an on-screen keyboard, rather than the physical one I know and love.

Having said that, my employer pays for mine. The new one's meant for emerging markets at a lower cost of about $275 (U.S.).

BlackBerry described the Leap as an "affordable all-touch smartphone that is built for companies and mobile professionals who value security and privacy."

Toronto costs rise
It's getting easier to own a home, or at least not rising markedly, in some regions of the country.

Not so fast, Toronto.

The swelling cost of buying a home in Canada's biggest city is outpacing that of other cities, while the slump in oil prices is easing the burden in Calgary, a new Royal Bank of Canada report shows.

And as for Vancouver, it's still the least affordable city in the country.

There has been much angst over inflated home prices in Canada, notably in Toronto and Vancouver, while the steam is certainly coming out of the Calgary market fast since oil prices began to plunge.

"We are watching Toronto pretty closely as it's a market that time and time again shows deteriorating affordability – indicating that owning a home in the area, especially a single detached, is a stretch for many local homebuyers," RBC chief economist Craig Wright said in today's report.

"While we've seen some improvements over the past couple of years, Vancouver still takes the top spot for the least affordable market in Canada," he added as the bank released its Housing Trends and Affordability Report for the fourth quarter of last year.

On a national basis, the cost of owning a home grew "slightly less affordable" in the last three months of 2014, marking the second consecutive quarter of that occurring.

Indeed, the bank said, affordability has been "relatively flat" for four years now.

"Meaning, ownership costs represented no more of a burden at the end of 2014 than in 2010 for a typical household," the report said.

"Still, one major local market had a far-reaching impact in the latest period, pulling down affordability data nationally."

That would, of course, be Toronto, where the affordability measure climbed by 0.8 of a percentage point.

Launched in 1985, the index tracks the "calculated costs" of owning a detached bungalow.

While affordability became harder in Toronto, it eased by 0.6 of a percentage in Calgary, rising nonetheless by a shade in Edmonton.

"Calgary became a buyers' market in the fourth quarter following a prolonged period of nearly three years when sellers had the upper hand," Mr. Wright said.

In fact, the latest report from the Calgary Real Estate Board showed resales plunging more than 34 per cent in February, from the same period a year earlier, and average prices sinking 4.2 per cent.

"Demand-supply conditions in most other local markets remained generally balanced with the exception of Vancouver, which stood out as a sellers' market," Mr. Wright said.

Vancouver also showed a dip, of 1.2 percentage points from the previous quarter, though it's still the highest.

Just today, the Real Estate Board of Greater Vancouver reported that home sales in the area surged 21 per cent last month to 3,061. That's more than 20 per cent above the 10-year average for a February.

The MLS index price, as opposed to the average, climbed 6.4 per cent.

Montreal was unchanged in the RBC measure, and Ottawa up slightly.

Looking forward, the bank cited "limited upward pressure" on prices in most of Canada's markets, given lower interest rates.

At some point, though, the Bank of Canada will begin to hike its benchmark rate, though not at any time soon.

"Any rise in interest rates would threaten to erode affordability conditions and weigh on homebuyer demand in Canada," said Mr. Wright. 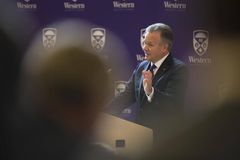 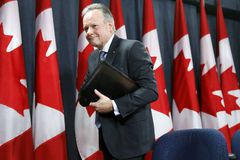 Why Canada's manufacturing sector is so depressing
March 2, 2015