Canadian businesses have gained so much from the North American free-trade agreement that killing the pact would be a “scary proposition,” economists warn.

And it’s not just Canada, they say. Both the United States and Mexico have also gained.

Which is why, Royal Bank economists Laura Cooper and Nathan Janzen said, NAFTA’s demise would have such widespread ramifications.

Their report comes as the three countries prepare for renegotiating the agreement after President Donald Trump said he’d kill the deal if it’s not to America’s benefit.

A negotiating tactic, to be sure, and an obvious one at that, but Ottawa now heads into talks with that cloud over its head.

“Canadian goods and services exports to the U.S. have more than doubled in size since NAFTA’s inception in 1994,” Ms. Cooper, an RBC economist, and Mr. Janzen, a senior economist, said in a new study.

“The U.S. and Mexico were also beneficiaries, with trilateral trade increasing more than three-fold over the period, clocking in above $1-trillion (U.S.) in 2015,” they added.

“Over this time, businesses have benefited from lower tariffs, greater clarity on trade rules and lower technical barriers to trade, making the outright dissolution of NAFTA a scary proposition. The consequences would be significant across all three countries.”

The softwood duties may have been “a shot across the bow,” they warned.

“But President Trump has shown a willingness to reverse an earlier position. He may have a change of heart once again.”

Here’s their look at where things stand, which underscores the potential impact on Canadian businesses and just how much is at stake: 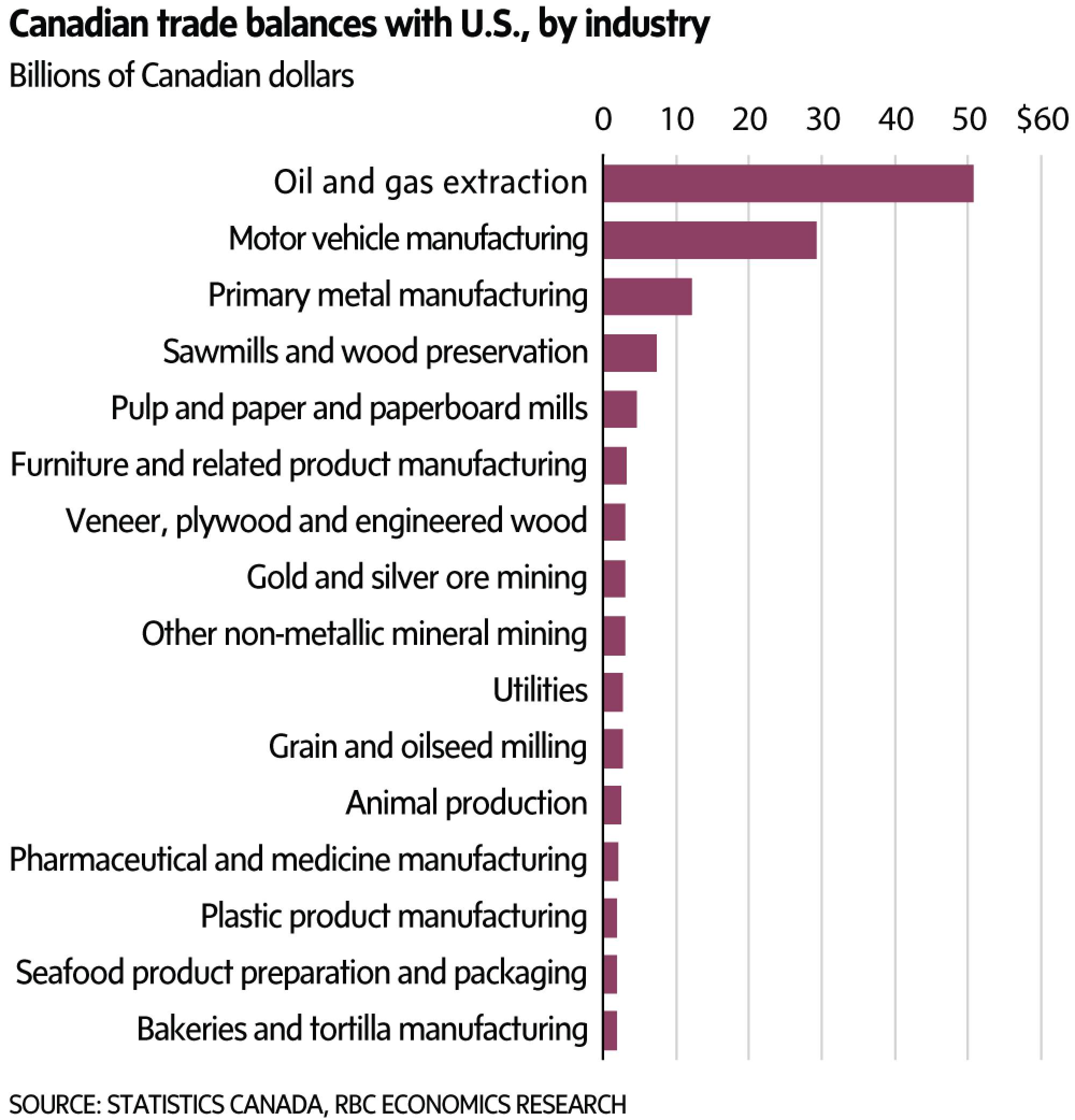 Canada boasts a goods trade surplus with the U.S., pumped up by energy exports, but has run a deficit in overall trade in goods and services.

Just this morning, Statistics Canada reported that the country’s goods trade deficit with the world narrowed much more than expected, to just $135-million, as exports climbed 3.8 per cent in March to record levels. Imports rose 1.7 per cent.

Canada’s surplus with the U.S. dipped to $4-billion from March as our exports inched up just 0.1 per cent while imports rose 2 per cent.

March also marked a record for exports to countries other than the U.S., a 15.3-per-cent gain, led by shipments to China, India and South Korea.

It’s not just the possibility of NAFTA’s death, noted trade lawyer Peter Kirby, a partner at Fasken Martineau. Just the threat is enough to dissuade businesses that want NAFTA-related access to the U.S. from locating or investing in Canada.

“During last year’s election campaign, much of the trade talk focused on Mexico and China,” said Ms. Cooper and Mr. Janzen.

“But the administration’s first major import duties were against Canada - the latest salvo in the long-running softwood lumber dispute between the countries,” they added.

“The trade action didn’t come as much of a surprise, and is likely to have a limited impact on the broader Canadian economy. But with the U.S. even threatening a full withdrawal from NAFTA, further signs of a breakdown in the bilateral trade relationship are significant.”

Canadian Imperial Bank of Commerce has increased its bid for Chicago-based PrivateBancorp Inc. a second time, adding cash to the offer eight days before shareholders cast a decisive vote on the deal, The Globe and Mail’s James Bradshaw reports.

CIBC said the new bid is its “best and final offer,” infusing an extra $3 in cash per PrivateBancorp share into its cash-and-stock proposal.