Economists don’t believe the Canadian government’s new housing market rules will spark a meltdown, but they do expect the measures will “harden” the landing.

The first of the tax and mortgage measures are just coming into effect, with the second phase slated for the end of next month.

“We estimate that roughly one-in-five housing sales could be affected by these changes, although we expect a proportion of exposed borrowers will still have the ability to qualify, thereby minimizing any decline in sales,” said Royal Bank of Canada economist Robert Hogue.

“We expect the impact from these new rules to be immediate.”

Among those in effect now are mortgage-qualification rules.

As The Globe and Mail’s Brent Jang reports, and as Canada Mortgage and Housing Corp. chief Evan Siddall writes, this comes as CMHC is poised to issue its first ‘red’ warning for the country’s housing market. 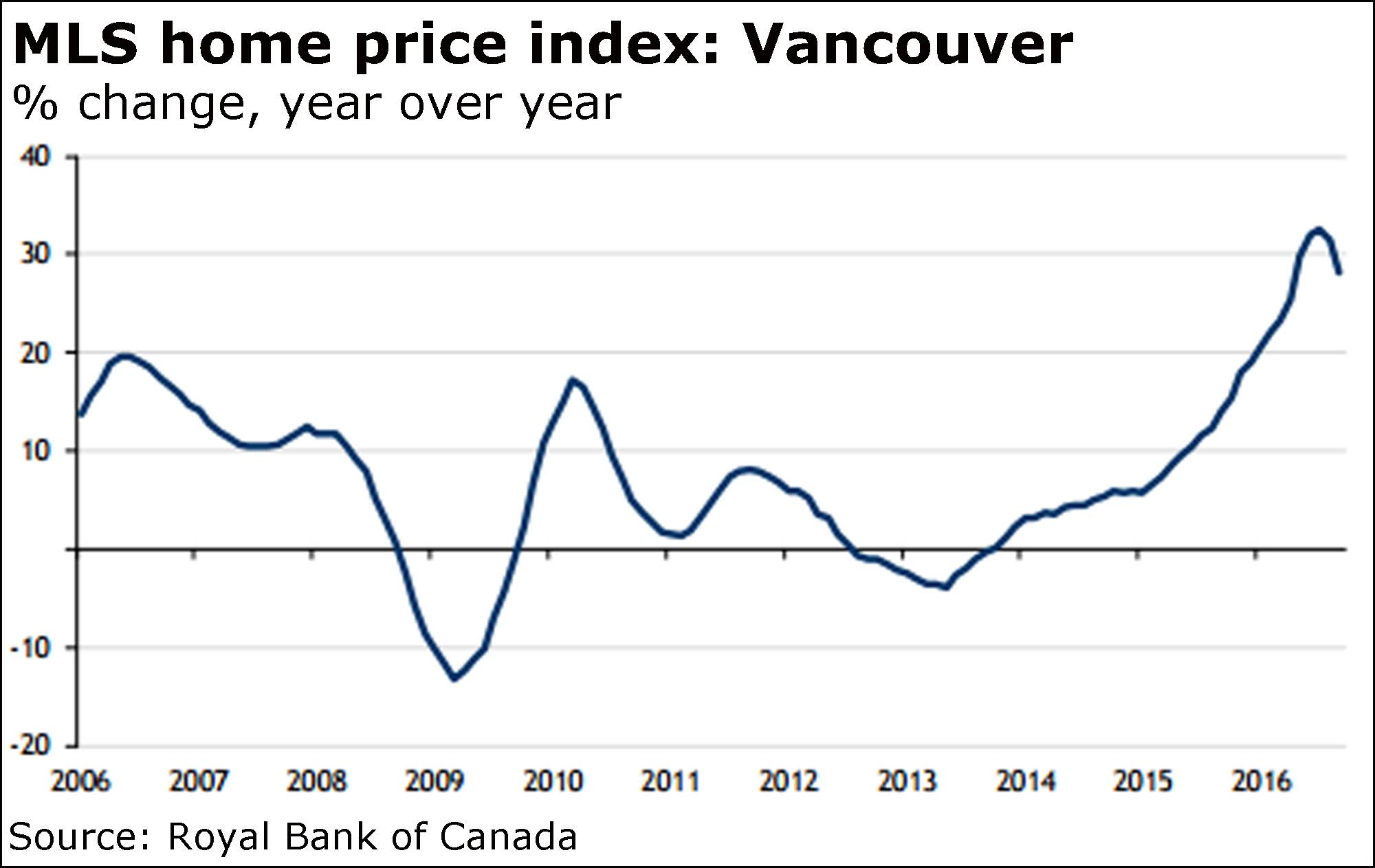 The Vancouver market, hit by a separate 15-per-cent tax on foreign buyers of area homes, is already fading, leaving Toronto and surrounding regions as the country’s only hot properties. 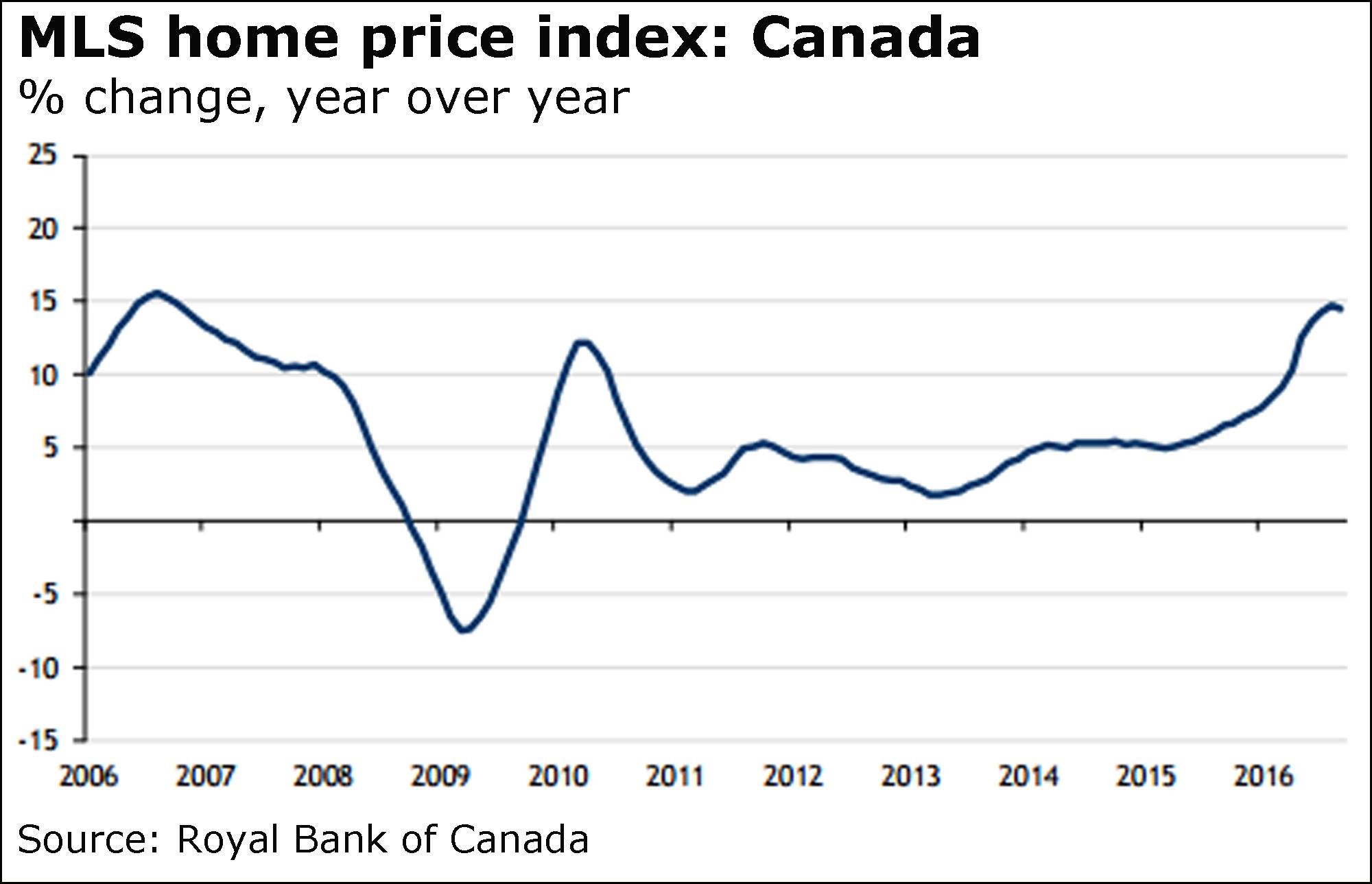 “The new measures are likely to both speed up and harden the ‘landing’ in our base case scenario for Canada, although they are unlikely to cause a ‘crash,’” Mr. Hogue said.

“We believe that the dampening effects will be felt in all regions of the country,” he added in a recent report.

“Our preliminary estimates show a projected decline of nearly 11 per cent in home resales in Canada in 2017 compared to our previous forecast for a 3.7-per-cent decline, and a small price decline of 0.2 per cent compared to a rise of 2 per cent previously.”

Toronto-Dominion Bank, in turn, expects a decline of up to 10 per cent in resales next year, and a drop in prices of as much as 1 per cent.

“The impact is expected to be more pronounced in Toronto, where activity is starting to look a little frothy, but should be spread across the country,” said TD economist Diana Petramala.

Then there’s the toll on economic growth. And we may hear more about that on Wednesday, when the Bank of Canada releases its rate decision and accompanying monetary policy report.

Observers believe there will be an impact on the pace of economic expansion, with some suggesting it could be as high as half a percentage point.

“We’re a bit more conservative with a 0.1– to 0.3-percentage-point hit to growth, depending on how mortgage rates evolve,” said BMO Nesbitt Burns senior economist Benjamin Reitzes.

There’s some good news there for the Bank of Canada, he added, because the new rules will help keep record household debt burdens in check. This has been a big issue for the central bank.

“However, we won’t see any evidence on that front for some time, so don’t expect those concerns to evaporate,” Mr. Reitzes said.

“Rather, expect some constructive talk [from the Bank of Canada] about the measures, while noting there remains uncertainty about the full impact.”

While the central bank won’t be changing its benchmark rate from its current 0.5 per cent for quite some time, “longer-term borrowing costs are likely to tick up as U.S. interest rates rise,” said TD economist Brian DePratto.

“This appears likely as markets increasingly price in a December interest rate hike south of the border,” he added, referring to what the Federal Reserve is expected to soon do.

“It may ultimately be U.S. policy that puts a lid on Canadian housing markets.”

Since we’re now down to basically just Toronto, where average prices have surged by about 20 per cent in the last year, it’s worth looking at how far the heat is spreading in Ontario. 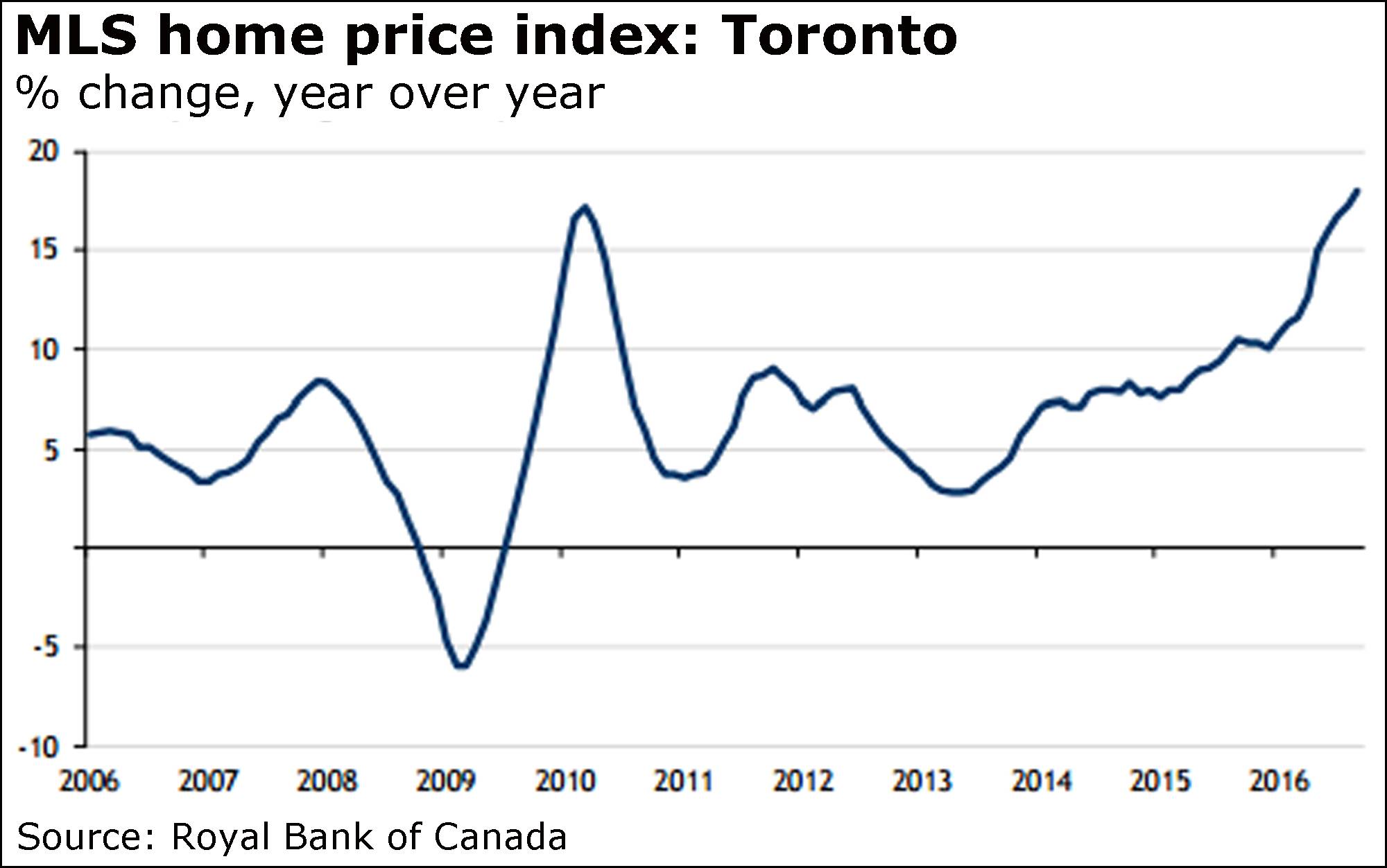 “We haven’t seen year-on-year price gains this big in Toronto since the late-80s boom (and we don’t want to revisit that episode),” said BMO chief economist Douglas Porter.

“Note also that strength continues to spread outside the GTA into markets such as Kitchener-Waterloo, Niagara Region, and Hamilton, with all posting double-digits gains in sales, or prices, or both.”

Niagara came in for special mention, given that sales have surged 24 per cent in a year, and prices 26 per cent.

What is it about the Niagara area?

“We may also be witnessing the long-awaited exodus of retirees out of the high-priced TO market, to (slightly) warmer and (slightly) less expensive regions nearby.”

Guy Laurence is leaving as chief executive officer of Rogers Communications Inc., to be replaced by an import most recently at rival Telus Corp.

Mr. Laurence is leaving the Canadian telecommunications giant immediately, the company announced and Joseph Natale, the former chief of Telus, will take his place as soon as he can.

His tenure at Rogers will be delayed by a non-compete arrangement, The Globe and Mail’s Christine Dobby reports.

Mr. Natale left Telus in the summer of 2015, the company saying he didn’t want to move to western Canada. As a result, former CEO Darren Entwistle returned.

“We believe Mr. Laurence has done a very good job re-energizing the company since his arrival and repositioning it for the future, and his departure could be perceived as a negative,” said Desjardins analyst Maher Yaghi.

“However, we believe Mr. Natale is also a very capable operator and commands a high level of credibility in his role to lead Rogers going forward.”

Rogers said little in its announcement, citing Mr. Laurence’s achievements and how he prepared the company “for its next phase and growth” over the past three years.

“Following the transition, the board will look to Joe to take the company forward and continue the momentum we’ve established in the past couple of years,” said chairman Alan Horn, who will act as interim CEO.

Rogers also released third-quarter results showing a drop in profit to $220-million, or 43 cents a share, basic, from $464-million or 90 cents a year earlier. It blamed higher investment-related costs for the decline, largely its planned shutdown of its Shomi service.