The OECD is cutting its outlook for Canada’s economy, also issuing a new warning on inflated home prices.

It’s certainly not the first time the Organization for Economic Co-operation and Development has openly worried about Canada’s housing market, but it is another voice in the growing chorus.

It’s also not the first to take a dimmer look of Canada’s economic prospects.

In updating its forecasts, the OECD cut its projection for 2016 economic growth in Canada to 1.2 per cent, down by half a percentage point from its June prediction.

And as this chart shows, Canada was among those singled out for its housing market, which has been driven up by price surges in the Vancouver and Toronto areas.

“Over recent years, real house prices have been growing at a similar or higher pace that prior to the crisis in a number of countries, including Canada, the United Kingdom and the United States.”

Here’s an interesting twist: The threat may be “less severe” than before the crisis when the rise in home prices doesn’t go hand in hand with higher consumer debts.

That, of course, isn’t the case in Canada, where the key measure of household debt to disposable income has climbed to record heights.

“Some countries should more actively use macro-production regulation to mitigate potential risks,” the OECD said.

Wealth at record. But wait

To twist the slogan of one of Canada’s big banks, here’s why you won’t be richer than you think: House prices.

The latest numbers from Statistics Canada show household net worth now at a record $9.8-trillion, or $271,300 on a per-capita basis.

That’s more than 830 per cent when measured against disposable income.

But. And there’s a big but here.

We’re wealthier in large part because of hot property values and stock investments.

Forget the latter, and focus on home prices, which Statistics Canada says was the primary driver of net worth in the second quarter of the year.

While the Toronto housing market is on fire, it and its surrounding regions are just about the only hot ones left.

The Vancouver market is cooling rapidly, and is expected to do so in the wake of a new 15-per-cent tax on foreign buyers of homes in the area.

Other markets have also cooled, and observers expect Toronto will get there, as well, in time.

While the Statistics Canada report showed net wealth at a record, the “value of assets can fluctuate considerably,” noted Paul Ashworth, the chief North American economist at Capital Economics.

“In this case a large part of the surge in net wealth over the past couple of decades is due to the rise in housing values,” Mr. Ashworth said in a recent report.

“When house prices fall, so will households’ net wealth.” 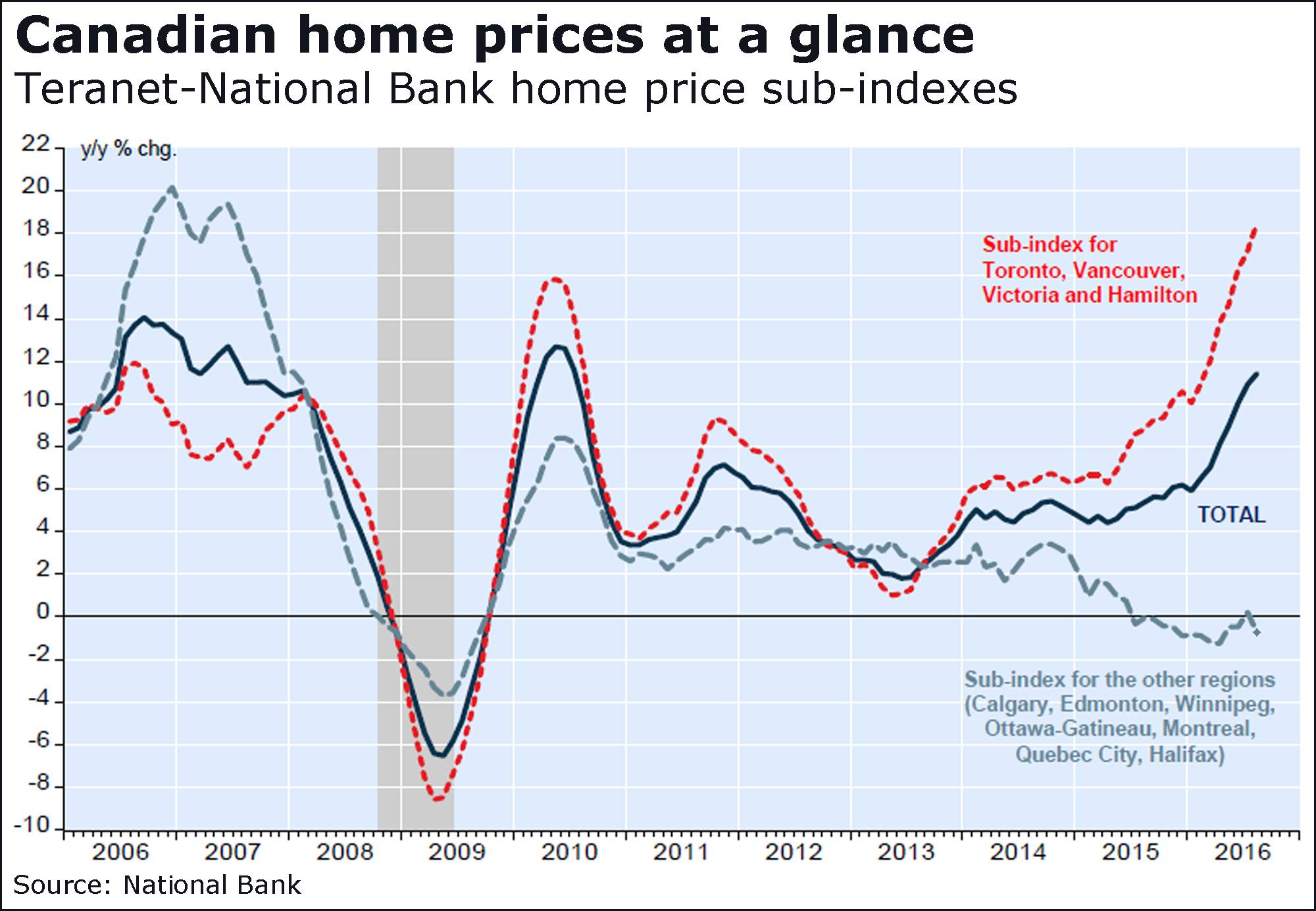 The drop in average Vancouver home prices has “already exceeded our expectations for a 10-per-cent peak-to-trough correction,” said Toronto-Dominion Bank economist Diana Petramala, projecting that market will “remain weak” through to at least early next year.

As for Toronto, “relatively tight market conditions and a lack of new initiatives to tax foreign real estate activity should keep Toronto home prices in the black, with home price appreciation to cool in line with inflation beginning in mid-2017,” Ms. Petramala said.

“Low interest rates coupled with modest economic gains are expected to keep housing activity fairly stable elsewhere in Canada. Still, following a 10-per-cent gain this year, weakness in Toronto and Vancouver are expected to pull the average Canadian home price down 1 per cent next year.”

The Ontario government has anointed Bedrock Industries Group as its choice to take over U.S. Steel Canada Inc., which has been operating under creditor protection for two years, The Globe and Mail’s Greg Keenan reports.

Bedrock Industries LP, a private equity fund that specializes in metals and mining investments, has signed a memorandum of understanding with the province to “facilitate the restructuring” of the company.

The terms of the agreement are confidential, the government and the company said in a statement, but the restructuring is intended to protect jobs, pensions and post-employment benefits as well as keep operations in Hamilton and Nanticoke, Ont., operating.

The Bank of Japan shifted its policy today, but economists aren’t so sure that’s going to help all that much.

Rather than cutting its key interest rate, the central bank chose instead to target 10-year government bond yields, with purchases aimed at keeping them at about zero.

“This morning’s actions by the Bank of Japan in tweaking its monetary policy framework appear to have had the desired effect in weakening the yen, and boosting the Nikkei, with sharp rallies in bank and financial stocks, but one can’t help feeling that it may not last,” said CMC Markets chief analyst Michael Hewson.

“While Japanese policy makers kept their options open with respect to further cuts to the headline rate into negative territory, they appear to have focused their attention on targeting the shape of the yield curve in order to take the pressure off banks as a flatter yield curve took its toll on bank profitability.”

Mr. Hewson said that while the decision may help commercial banks, “it’s doubtful they will help the Japanese economy that much, and in some ways it shows how little flexibility the central bank has, given how experimental policy is now becoming.”