One is expected to lead, the other to lag.

Such is Canada’s new reality in the wake of the oil shock.

Economists generally believe Ontario and British Columbia will lead economic growth among the provinces this year, while Alberta suffers a second year of recession.

In a new forecast, Laurentian Bank puts Ontario a shade above B.C., citing “a new period of sustained economic prosperity” for the central Canadian province.

And like other observers, Laurentian assistant chief economist Sébastien Lavoie and economist Dominique Lapointe project Alberta will trail the country amid the sustained collapse in oil prices.

Here are six charts behind the forecasts in their recent report: 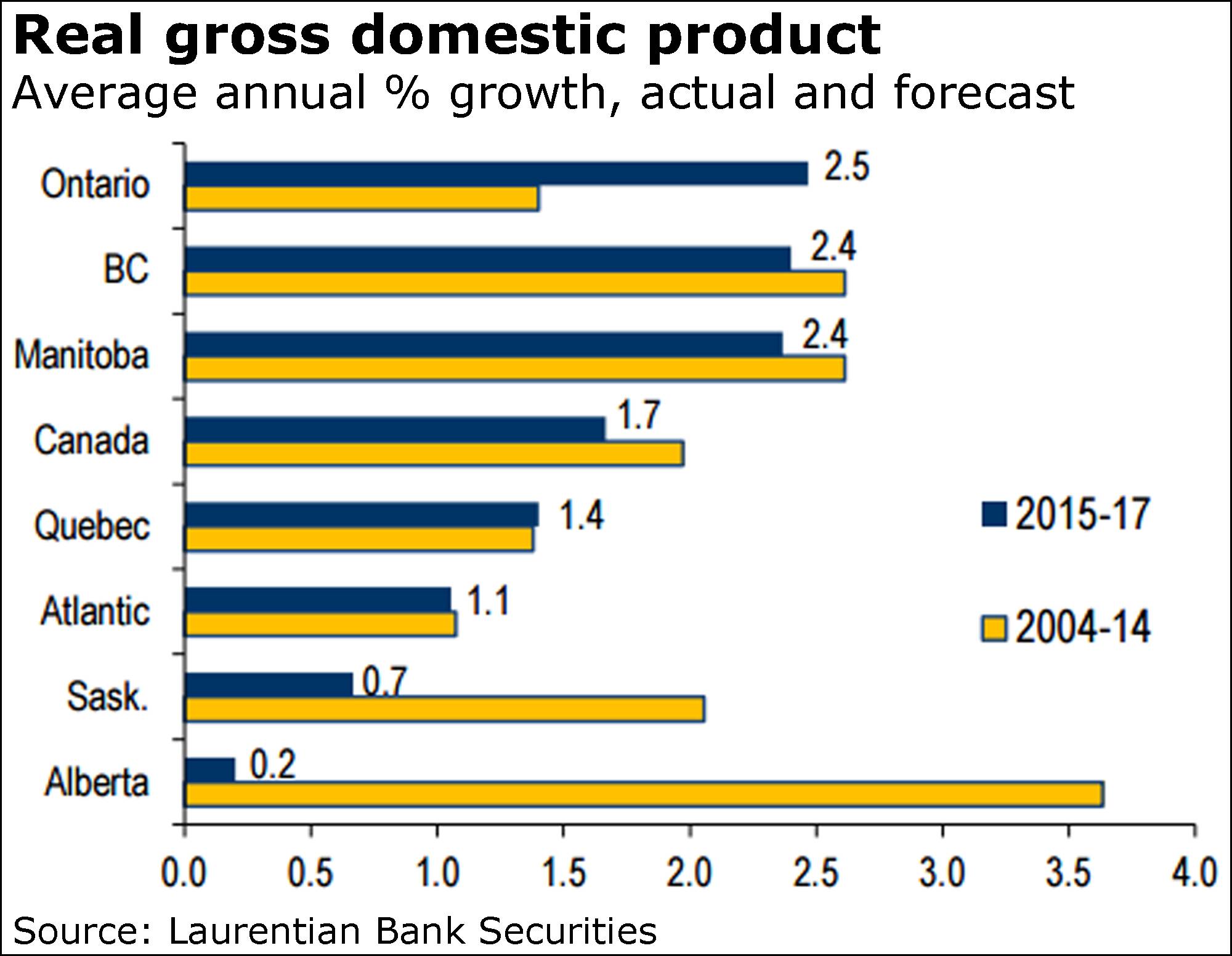 This chart says it all.

“Most major economic indicators are pointing towards a contraction, as the downsizing of the oil industry trickles down to other sectors of the economy,” said Mr. Lavoie and Mr. Lapointe.

In Ontario, on the other hand, the economy “is entering a new kind of prosperous period, thanks to the low loonie that is notably improving the competitiveness of the overlooked services export sector.”

Bank of Nova Scotia, in a new forecast released late yesterday, pegs economic growth in Ontario at 2.2 per cent this year, compared with a contraction of 1.9 per cent in Alberta.

Scotiabank believes Alberta’s jobless rate will spike even further, to 7.3 per cent, while Ontario holds steady at a still-elevated 6.8 per cent. 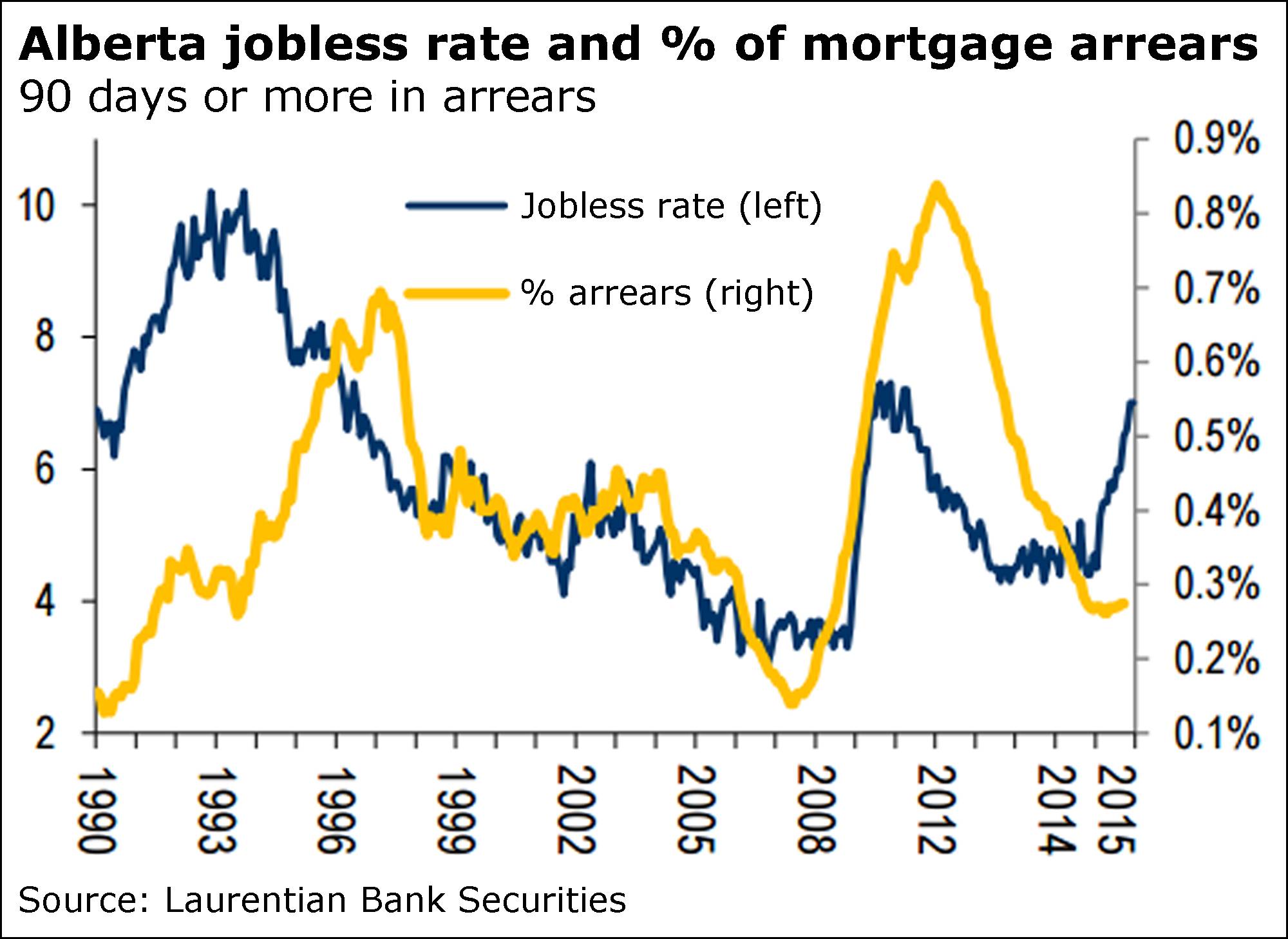 The Bank of Canada has already raised red flags about the borrowing habits of Albertans.

Mr. Lavoie and Mr. Lapointe flagged the recent decline in home prices as possibly leading to defaults, noting that “the share of highly vulnerable households in Alberta (those with a debt-to-income ration at 350 per cent or above) is similar to that in the U.S. in 2007.” 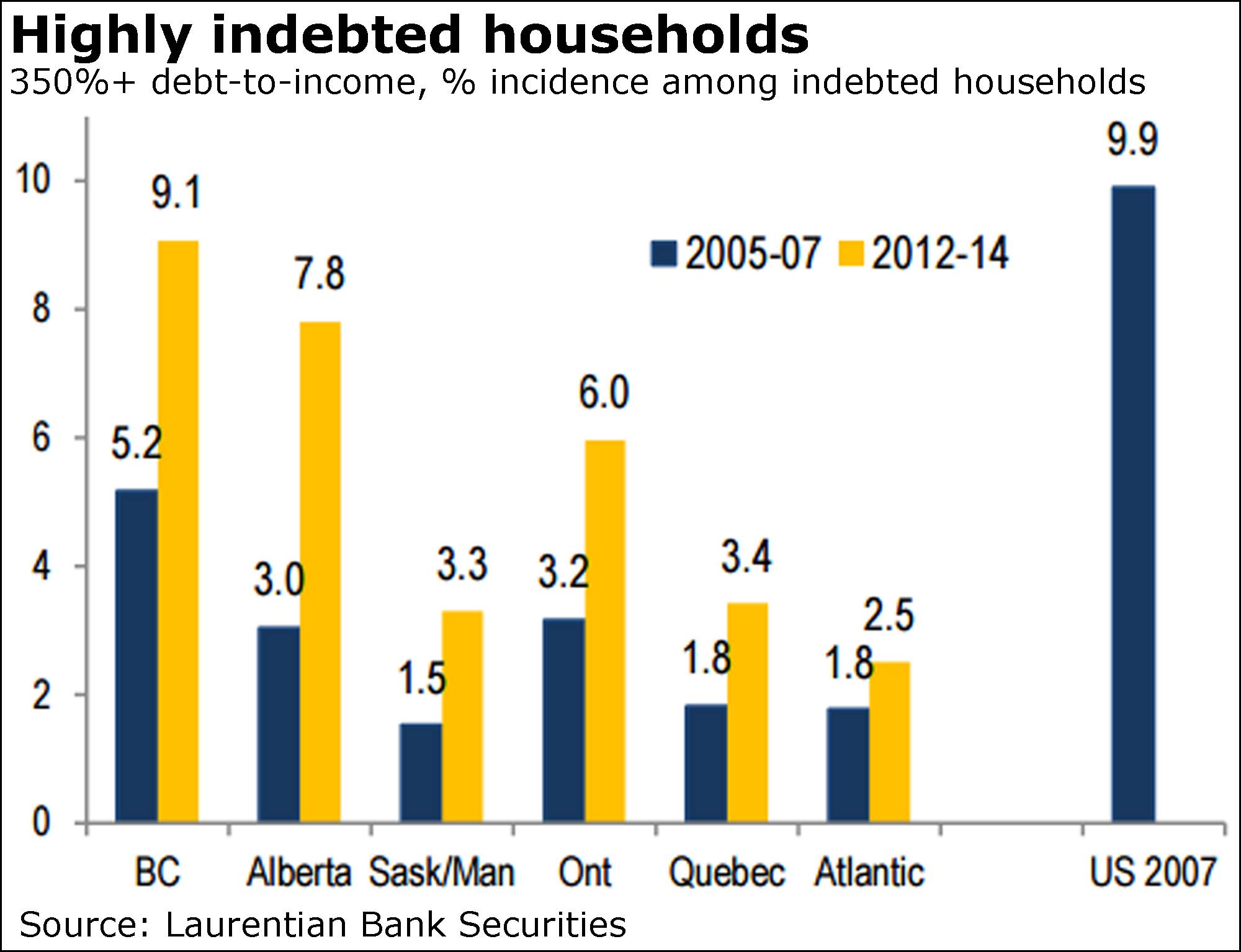 Of course, British Columbia is higher, and strikingly close to that 2007 mark. But, as Mr. Lapointe noted, its economy is growing.

And Ontario is nowhere near the mark. 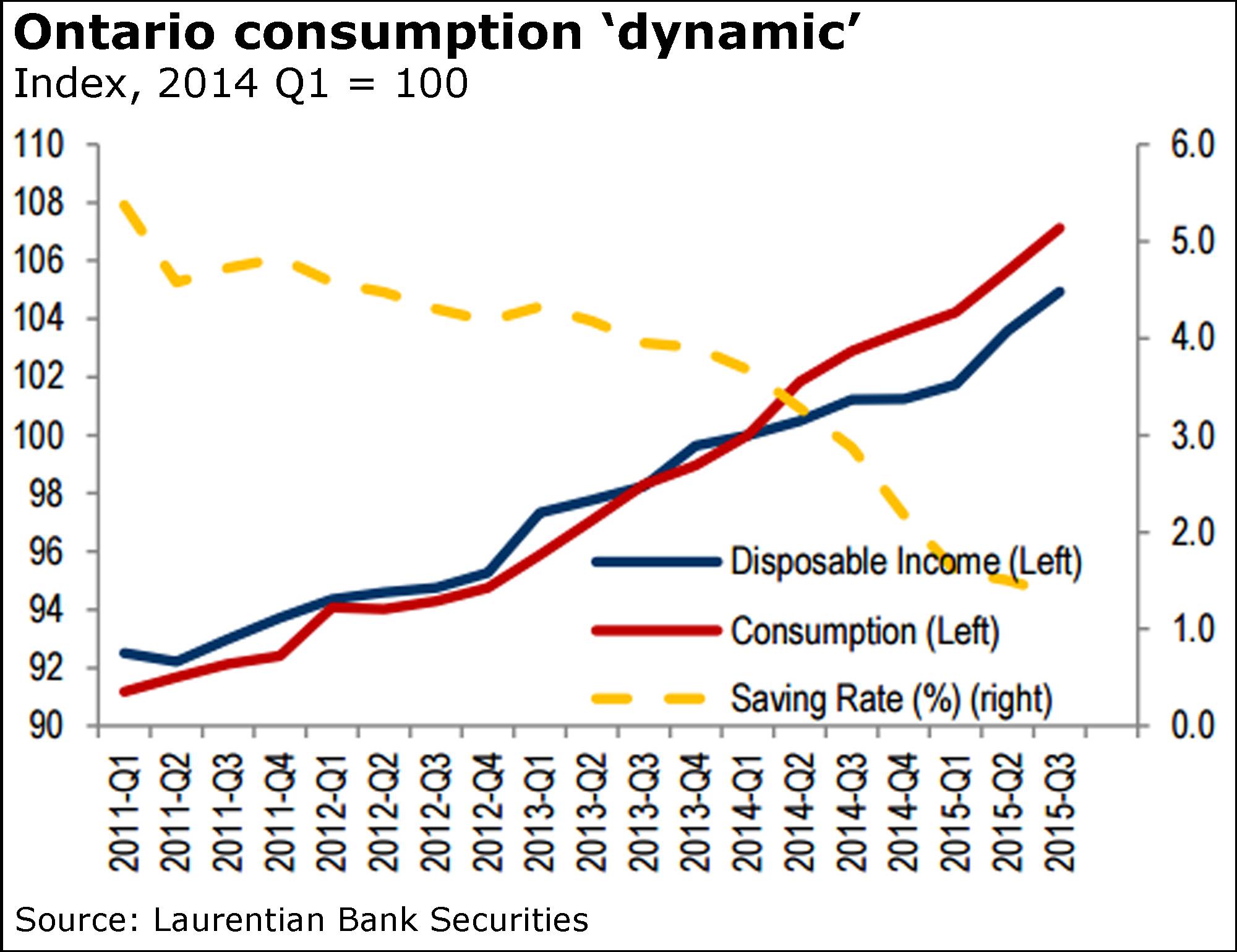 Compare that to Ontario, where families are expected to “channel a larger part of their income gains into savings rather than spending,” the Laurention economists said.

“The latter outstripped incomes to a greater extent than usual during the last two years, leading the saving rate to falter to its lowest level in nine years in 2015 (1.4 per cent).” 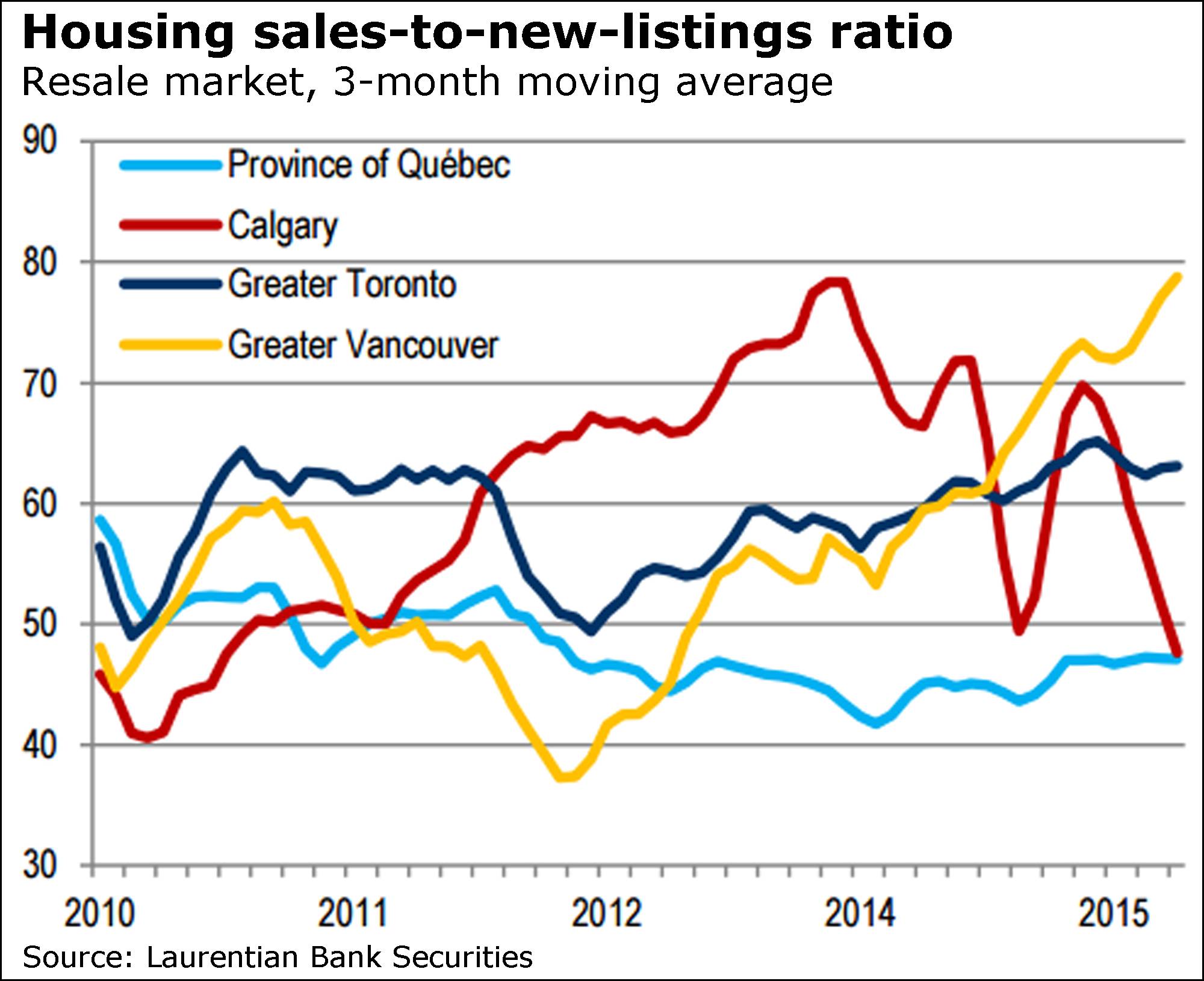 Calgary’s housing market has faltered along with the oil shock, while the Toronto market, like that of Vancouver, has boomed.

“Moreover, the population growth rate, still positive, is diminishing fast as potential home buyers and current homeowners are looking for work out of the province. In 2015, resale transactions were already 23 per cent lower than in 2014.” 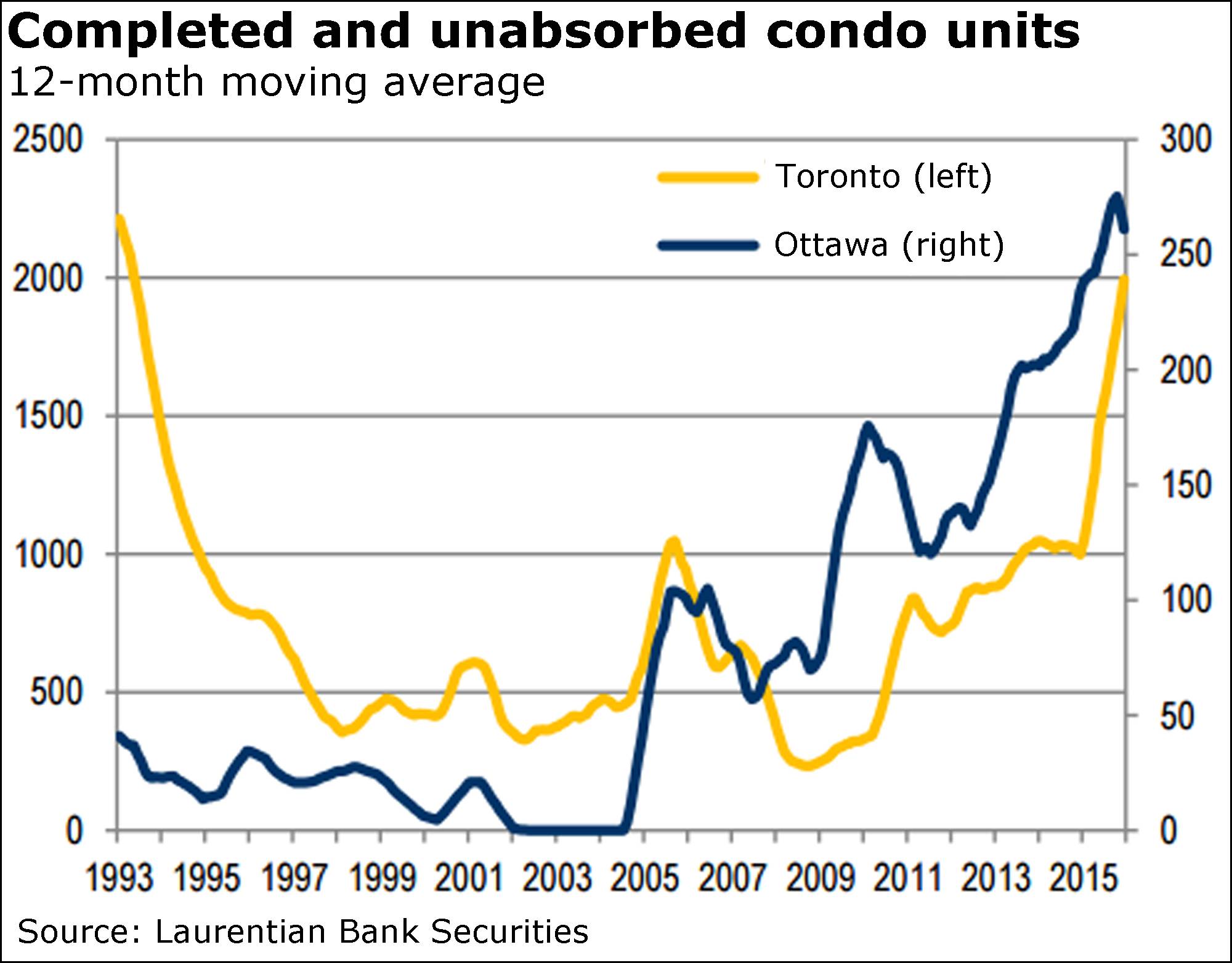 Toronto, of course, like Vancouver, has oft been the source of warnings over the frothy nature of housing.

So its boom is obviously something to watch, though Laurentian appears untroubled.

“With strong full-time employment gains and an unemployment rate running below the [rest of Canada] for the first time in a decade, housing demand and home building have trended higher,” the economists said.

“The growing number of completed and unabsorbed condos in the [Greater Toronto Area] and Ottawa markets should prompt a moderate decline in housing starts for the upcoming years.” 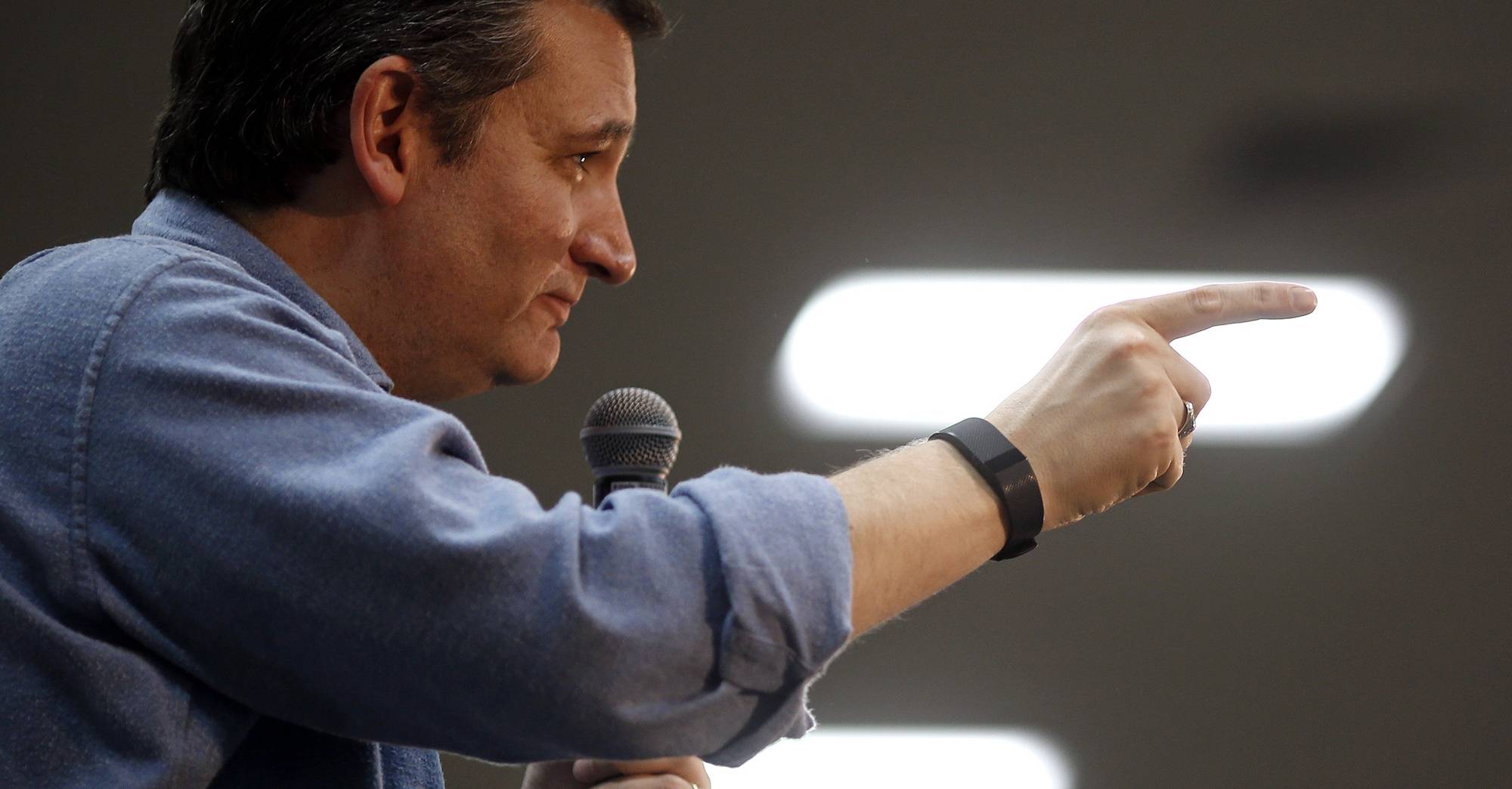 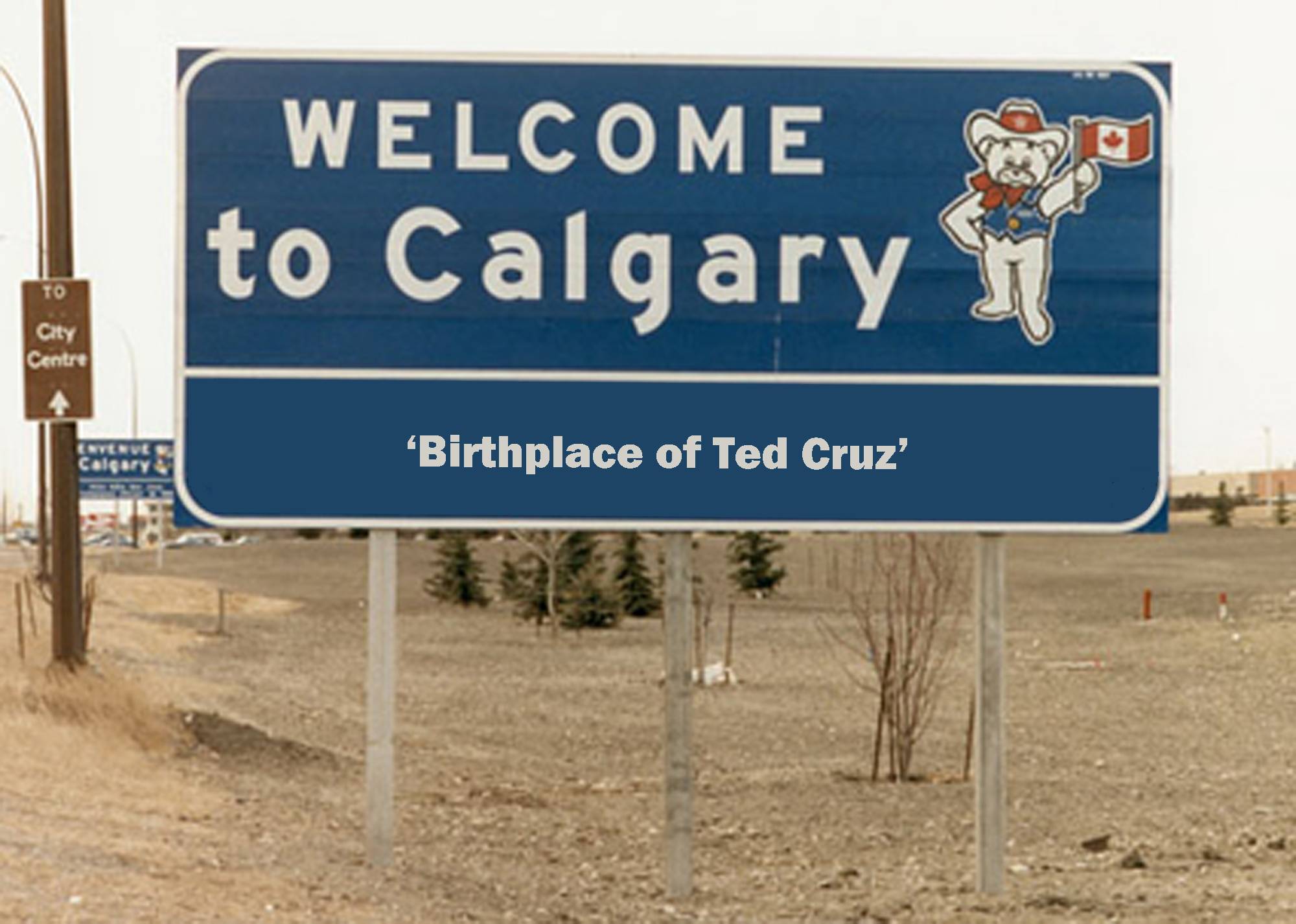 Investors soured today, with stocks sinking across the globe and oil prices falling.

Only the Shanghai composite was a winner, gaining 2.3 per cent, while Tokyo’s Nikkei lost 0.6 per cent, and Hong Kong’s Hang Seng 0.8 per cent.

“It would seem that central bank impact is really beginning to lose its charm and the days of buying the dip on the back of stimulus expectations is no longer the winning strategy it once was,” she added.

“We’re back to the same old story today, with materials and energy providing a drag on the FTSE as BP delivered what was frankly a terrible set of results.”

For a fresh take on the severity of the fallout from the collapse in oil prices, look no further than today’s results from BP PLC.

The global energy giant posted a hefty loss of $6.5-billion (U.S.), its biggest in two decades.

“The only positive to be taken away from BP’s results was the maintenance of the dividend,” said CMC Markets analyst Jasper Lawler.

“Profits before and after adjustments both significantly undershot, which reduces the capacity for BP to pay future dividends,” he added.

“It seems likely BP will have its credit rating downgraded in the not-too-distant future as the company slashes [capital spending] and increases leverage to sustain the same dividend it was paying when oil prices were more than double what they are now.”

Exxon Mobil Corp., meanwhile, posted a drop in quarterly profit of 58 per cent, and Canada's Imperial Oil a plunge of 85 per cent.