These are stories Report on Business is following Tuesday, April 16, 2014.

The central bank and the dollar
Stephen Poloz likes a lower loonie. And that's just what he got today.

It was nothing major, and nowhere near the impact of last month when the Bank of Canada governor helped send the currency reeling. But enough to put a smile on a Canadian exporter's face.

The loonie, as Canada's dollar coin is known, was sitting at 91.05 cents U.S. just before the central bank released its rate decision and monetary policy report, and Mr. Poloz held a news conference.

By late in the day, the currency was down to 90.78 cents as some market players took the comments and outlook as notably dovish, even though the central bank did not change its stance.

"Did they actually say anything that should have caused it to weaken?" said chief currency strategist Camilla Sutton of Bank of Nova Scotia.

"No. They maintained their stance, and I think they're quite comfortable with CAD at $1.10."

What she meant by that is that Mr. Poloz and his colleagues are okay with the Canadian dollar, read the other way, at just about the 91-cent level.

Last month, comments from Mr. Poloz and his U.S. counterpart, Federal Reserve chair Janet Yellen, knocked the loonie below 89 cents. It has since regained some ground.

As The Globe and Mail's Barrie McKenna reports, the central bank today left its benchmark rate unchanged at 1 per cent, and again gave no hint of when that might change.

The erosion of the Canadian dollar will help juice the economy, but that's taking time, the Bank of Canada said.

"A wide range of export sectors are expected to benefit from the continued strengthening of the U.S. economy," the Bank of Canada said.

"This realignment of export growth with foreign activity will also be aided by the recent depreciation of the Canadian dollar. To date, however, the anticipated rebound in non-energy exports has proven to be elusive."

Some observers believe the central bank has engineered a lower dollar, and won't do anything to put that in jeopardy.

"If we take the bank's forecast at face value, with 2.5-per-cent growth and inflation getting to 2 per cent by early next year, you can't really argue that it is neutral in its rate outlook (i.e. as much chance that the next move is a cut or a hike)," said chief economist Avery Shenfeld of CIBC World Markets.

"Clearly, the bank is trying to avoid changing that stance for as long as possible, until we are closer to Fed hikes," he said in a research note after the statement, referring to the timing of a U.S. central bank rate increase.

"That's an effort to retain the current valuation of the Canadian dollar, which it sees as important in promoting growth where it really wants to see it, in exports, noting that even in its current range, the C$ has only reversed 'a small part' of the earlier decline in our export competitiveness. We share the view that a reversal of the C$ decline would be detrimental to getting back to full employment."

The new proposal would split Osisko's flagship Quebec gold mine between Yamana and Agnico and spin out some of the miner's exploration assets into a much smaller company, The Globe and Mail's Rachelle Younglai and Bertrand Marotte report.

"We think that this bid would offer [Osisko] shareholders sufficient enticement to tender their shares as they would receive a significant premium to the previous market price of [Osisko] shares," Desjardins analyst Michael Parkin said in a research note.

CPPIB sells unit
The investment arm of the Canada Pension Plan is selling its Air Distribution Technologies Inc. unit for about $500-million more than it paid a couple of years ago.

The Canadian Pension Plan Investment Board announced today it has struck a deal to sell the company to Johnson Controls Inc. for about $1.6-billion (U.S.), having purchased it for $1.1-billion from Tomkins in 2012, The Globe and Mail's Bertrand Marotte reports.

"We have developed a close partnership with the management team of Air Distribution," said Andre Bourbonnais, a senior vice-president at CPPIB.

China's growth slows (a little bit)
While there's always skepticism over the official data from Beijing, today's reading of first-quarter growth in China suggests the economy is holding its own.

As The Globe and Mail's Nathan VanderKlippe reports from Beijing, the official numbers today show economic growth slowed to 7.4 per cent from 7.7 per cent in the final quarter of last year.

That was a tad better than many economists had expected.

"There is always a degree of skepticism about the accuracy of these headline figures," said Julian Evans-Pritchard, the China economist at Capital Economics.

"Our China activity proxy (CAP) suggests that the pace of growth is somewhat slower than the official figures show but points to a similar trajectory, with growth holding up relatively well last quarter."

Quarterly growth, Mr. Evans-Prichard said, appears to have been buoyed by activity in March, in particular.

"Policy makers appear comfortable with the current pace of growth," he added.

"Li Keqiang presumably already had a good idea of where Q1 growth would come in when he ruled out major stimulus last week," he said, referring to comments by the Chinese premier.

Bank of America was hit by $6-billion in legal expenses in the wake of a settlement with the U.S. Federal Housing Finance Agency, and pumped up reserves, on previously announced mortgage-related issues.

"The cost of resolving more of our mortgage issues hurt our earnings this quarter," said chief executive officer Brian Moynihan. "But the earnings power of our business and customer strategy generated solid results and we continued to return excess capital to our shareholders."

Britain's jobless rate dips below key mark
Britain's jobs market is on the mend, with unemployment down to 6.9 per cent.

The jobless rate, meanwhile, is now down a full percentage point from a year earlier, marking the first time below 7 per cent in about five years. 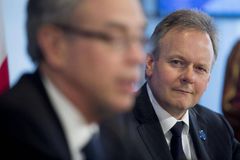 How speculators made a killing on the Canadian dollar
April 10, 2014
Bank of Canada appointment highlights Western’s economists
April 14, 2014 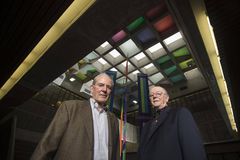