These are stories Report on Business is following Monday, April 7, 2014.

"If anyone truly believes that acquisitions of the type of WhatsApp aren't overvalued, they must be living in some form of parallel universe."

Mr. Hewson was referring to the recent $19-billion (U.S.) acquisition of the messaging service by Facebook Inc., which soon after also struck a $2-billion deal for Oculus VR Inc., which makes virtual-reality headsets.

The Nasdaq composite sank by 2.6 per cent on Friday, and a further 1.2 per cent today. Several notable tech stocks were hit, though the broader market was also hurt badly.

"Perhaps the key equity story now is the horrible price action in the momentum/growth stocks; especially ones that trade (or at least did trade) on outrageous valuations," said chief market strategist Chris Weston of IG in London.

"Anyone who has been watching price action on Twitter, Facebook, Tesla and Amazon, among others, would not see this as a particularly new story, as they are all in or around bear market territory."

What happens next is anyone's guess, of course. As Mr. Weston sees it, there could be a notable "correction," or, just as easily, a return of "buy-the-dip" investors.

"If you had said you would have seen some of the runs we've seen 12 months ago, many would struggle to believe you," he added.

"Especially if you told them about potential multiples."

"It seems investors have finally had enough of the sky-high valuations of these companies and have made a decision to deflate this bubble before it bursts," Mr. Erlam said.

"It looks as though the sell-off is not over yet either, with the Nasdaq seen opening another 23 points lower, or 0.7 per cent, around double the losses expected in both the S&P and the Dow," he added.

"This has been a long time coming really but I'm not convinced anything too extreme is going to happen. I think the decision to offload tech and Internet stocks is healthy for the market and will only be a temporary move."

Over all, investors were in a generally foul mood today. Tokyo's Nikkei lost 1.7 per cent, and Hong Kong's Hang Seng 0.6 per cent. In Europe, London's FTSE 100, Germany's DAX and the Paris CAC 40 were down by between 1.1 per cent and 1.9 per cent. The S&P 500 and Dow Jones industrial average lost more than 1 per cent, and Toronto's S&P/TSX composite 0.9 per cent.

As The Globe and Mail's Tim Shufelt reports, this comes just as a fresh earnings season is set to begin tomorrow when Alcoa Inc. reports. And playing into all of this is the Federal Reserve and its gradual pullback from stimulus measures, notably its bond-buying program known as quantitative easing, or QE.

"The next few weeks are shaping up to be fairly gloomy, with earnings season reminding investors that not only is the Fed taking a step back from its ultra-supportive stance, but corporate America is not yet ready to fill the void," said Mr. Erlam.

'Monumental' change
While the rest of the world was lamenting the absence of a new episode of The Good Wife last night, Potash Corp. of Saskatchewan stepped in with some excitement by naming a new chief.

In July, Jochen Tilk will take over from Bill Doyle, who, among other things, led a fierce defence against a hostile takeover by BHP Billiton Ltd.

Mr. Tilk, a 30-year veteran in mining, comes into the job at a dramatic time for the industry after the break-up of a Russian cartel drove down prices.

Raymond James analyst Steve Hansen referred to it as a "monumental changing of the guard," as an outsider comes in after a three-year search for Mr. Doyle's replacement.

That Mr. Doyle is stepping down isn't that surprising, said Mr. Hansen, though his replacement may be.

"Irrespective of all prior foreshadowing, it's hard not to be a little taken aback, that such a monumental 'changing of the guard' will unfold on the heels of one of the potash industry's most volatile periods (i.e., the recent collapse of BPC) and, despite recent signs of recovery, during a period wherein the industry's long-term challenges arguably remain formidable (i.e., overcapacity, lackluster demand growth, powerful/disruptive new entrants) - all points which make the decision to bring in an industry 'outsider' somewhat perplexing, in our view," he said.

Mr. Doyle, who has been with Potash Corp. for almost three decades, will stay on with the title of senior advisor until mid-2015.

Business sees boost from currency
The sharp slide in the Canadian dollar is giving companies a boost in sales, but it's also stoking fears that costs will rise, according to the Bank of Canada's latest quarterly business outlook survey.

For the first time since the Spring 2013 survey, more businesses reported sales increases than declines over the previous 12 months, the central bank said Monday.

And that bodes well for the economy going forward, The Globe and Mail's Barrie McKenna writes.

"An improving U.S. economy and recent depreciation of the Canadian dollar, together with firms' efforts to create new opportunities, are helping to support expectations for better growth prospects," the bank said. 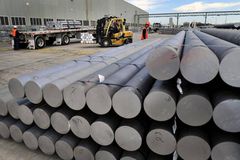 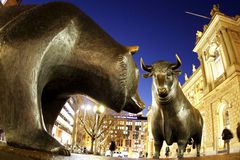