Being able to afford a house has become so difficult that saving for a down payment takes years in Toronto and possibly decades in Vancouver, new research suggests.

Toronto is troublesome, and Vancouver positively out of sight, according to a National Bank Financial study, although it is far easier in other Canadian markets such as Montreal and Calgary.

Indeed, in Toronto and Vancouver, affordability for homes other than condos is the worst in National Bank records dating back to 2000, based on first-quarter data.

National Bank senior economist Matthieu Arseneau and associate economist Kyle Dahms compared house prices, incomes, required down payments and the mortgage payment required as a percentage of income, or what they called MPPI.

There are huge differences across the country as the Vancouver and Toronto markets, in particular, continue to surge.

Homes in Montreal are the most affordable in 10 years, the economists said, while the MPPI for Calgary is the lowest on record amid the oil slump.

“The story is radically different in Vancouver and Toronto, the country’s two largest markets as measured by aggregate value of dwellings,” they said in their report.

“Vancouver’s MPPI is now very close to the top of its range of recent years and Toronto’s is at a 20-year high,” they added.

“In both markets, non-condo affordability is the worst on record, and this at a time of record-low interest rates.”

Striking, too, is the amount of time it takes to save for a down payment, as this table for singled detached houses, semis and townhomes shows. 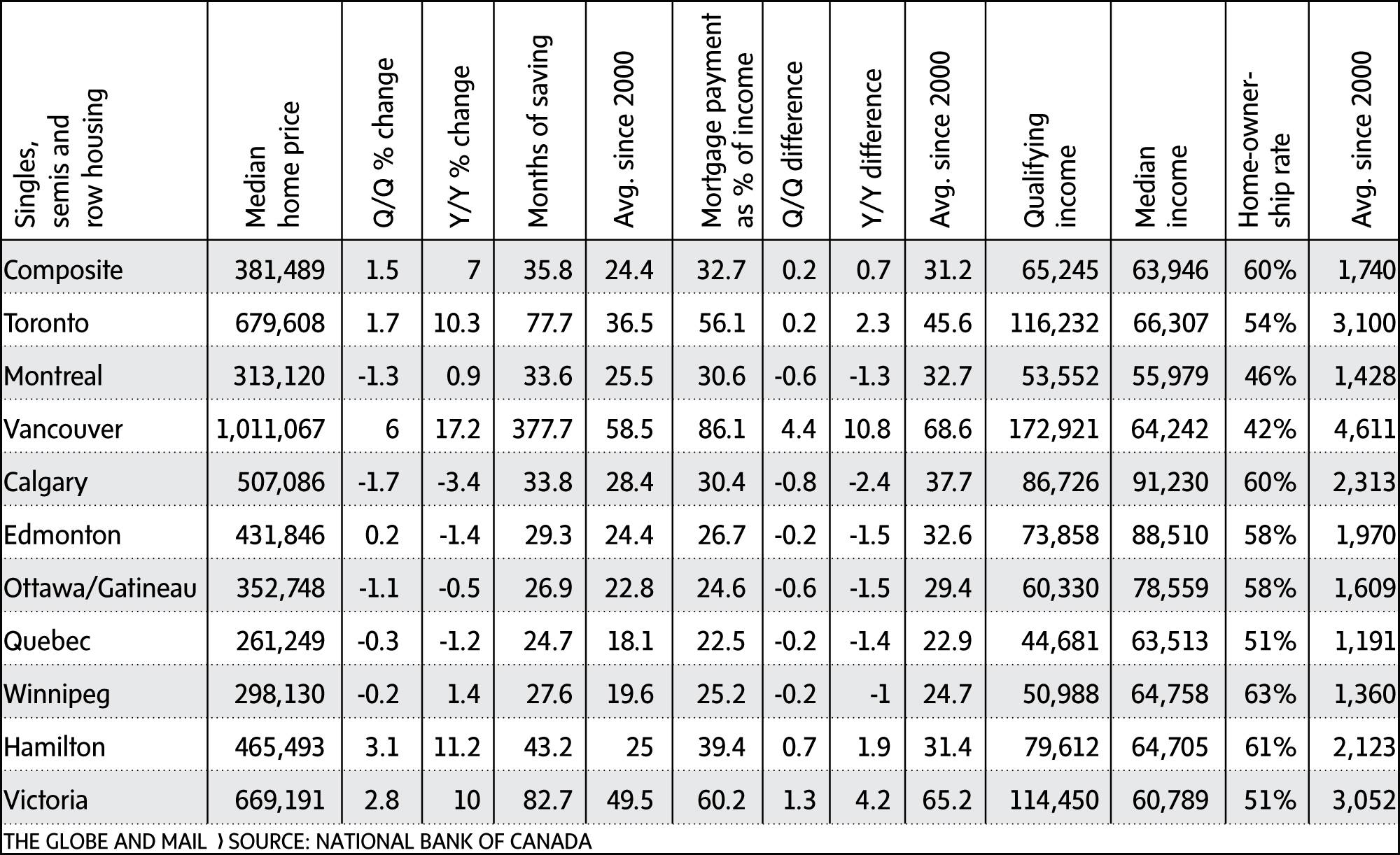 So that you don’t have to do the math yourself on the fifth column from the left, the table suggests it would take about 31.5 years to save up for the down payment required in Vancouver, almost seven years in Victoria, and about 6.5 years in Toronto.

At play here, Mr. Arseneau said in an interview, are also federal insurance rules. The first $500,000 in the price of a home requires a 5-per-cent down payment, with 10 per cent needed on that portion of the overall price between $500,000 and $1-million.

Above that, though, it soars to 20 per cent of the entire amount, which is why Vancouver, as the only city above $1-million, stands out.

These are based on medians, of course, and everything from price to income will differ from city to city and person to person.

European Central Bank president Mario Draghi unveiled no new stimulus measures today even as he warned that interest rates could soon turn negative again but said the bank is ready to intensify its fight against deflation if the euro zone economy falters.

His message that the ECB has not run out of ammunition to fight deflation was accompanied by a robust defence of the ECB’s independence and its mandate to ensure price stability in the 19-country euro zone, The Globe and Mail’s Eric Reguly reports.

In recent weeks, several prominent German politicians have attacked the ECB and its stimulus policies for stoking the rise of right-wing populist parties and damaging the savings plans of millions of Germans.

The commodities shock continues to hit home in Alberta and Saskatchewan, where the number of people receiving jobless benefits is climbing.

That number rose in February by 3.5 per cent in Saskatchewan, and 2.4 per cent in Alberta, with little change in Newfoundland and Labrador, Statistics Canada said today.

Saskatoon suffered a 5.2-per-cent increase, and Regina 1.5 per cent.

The number of recipients is now up by almost 79 per cent in Alberta.