Americans are flocking to Canada at a pace we haven’t seen in years, helping to pump up the retail and tourism industries.

No, they’re not Trump refugees, but rather shoppers enjoying the automatic discount from the low loonie.

Over the course of the last two years through to February, noted BMO Nesbitt Burns, the number of American visits north has surged 20 per cent. That’s more than two million for the first time in eight years, said BMO senior economist Sal Guatieri. 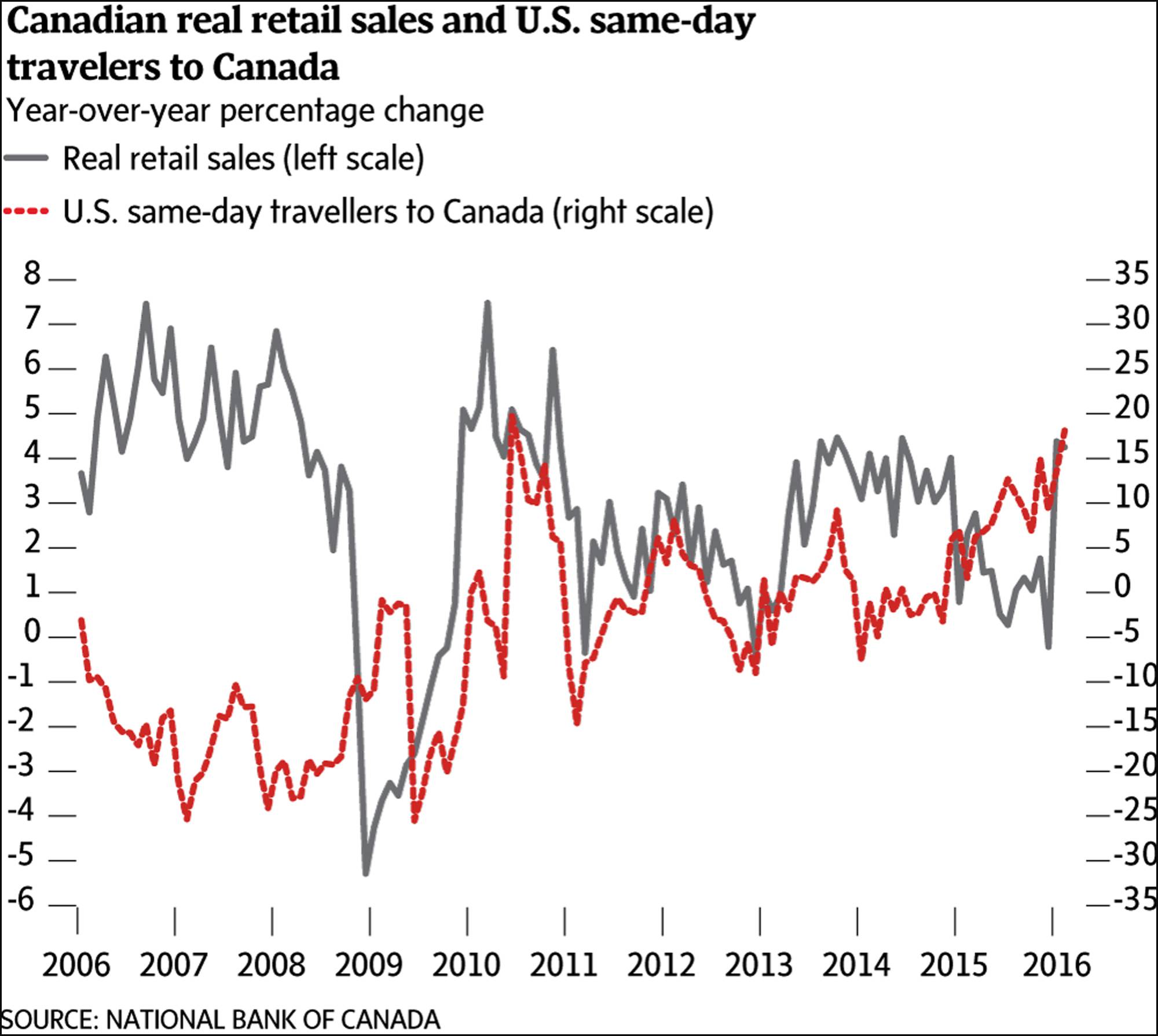 One of the gauges of cross-border shopping are same-day trips, which Mr. Rangasamy’s research shows is now on the rise from the U.S. at the fastest pace in six years.

As both Mr. Rangasamy and Mr. Guatieri noted, there’s a dual impact from the devalued Canadian dollar, which is at about 79 cents U.S. today, having rallied from an oil-shock-induced low near 68 cents in January.

Not only do Americans get a discount when they cross the border, Canadians lose buying power when they visit the U.S.

Which at least partly accounts for why Canadian trips to the U.S. have tumbled by 26 per cent over two years.

That's an important point given that summer vacations are almost upon us.

Of note is that New Brunswick has chalked up the fastest increase in retail sales among the provinces. 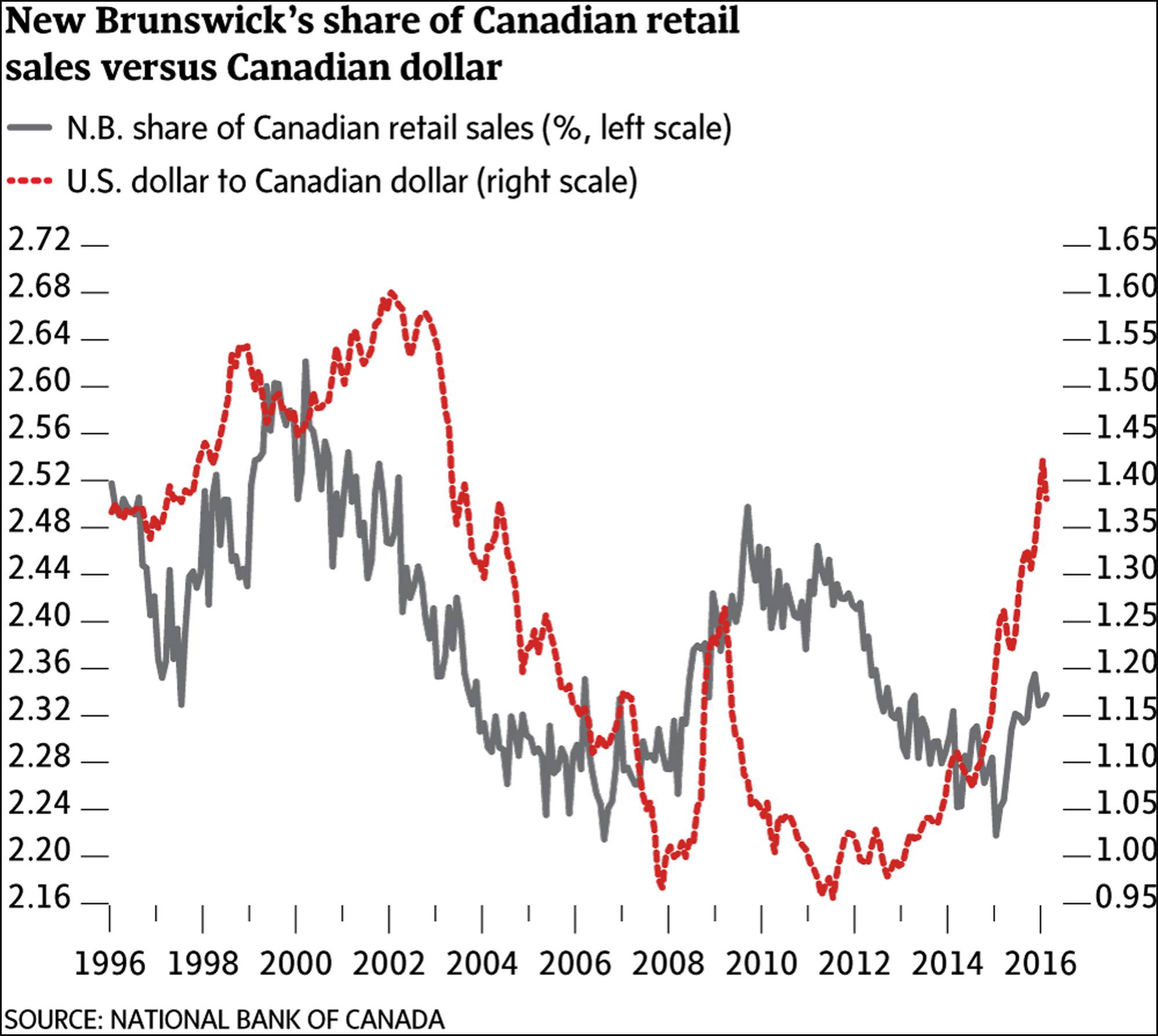 “New Brunswick gets the largest amount of same-day U.S. travellers as a share of its population than any province, which explains why its retailers tend to benefit disproportionately from the loonie’s depreciation, the only exception being during 2011-2014 when the province was going through harsher-than-usual domestic economic conditions.”

And while the loonie has rallied of late, there’s little to worry about unless the Canadian dollar tops its purchasing power parity level of about 85 cents.

That’s not likely to happen any time soon, CIBC World Markets said in a new currency forecast yesterday, projecting a loonie will be worth just shy of 75 cents by late this year, and just above that a year later.

“The best is likely behind for the loonie,” CIBC said.

“The Bank of Canada took aim at the currency in its most recent rate announcement by saying that the outlook for non-energy exports was weaker as a result of the stronger Canadian dollar, and it can be expected that the bank would use firmer language if the currency continued to gain ground on its U.S. counterpart.”

Barrick Gold Corp. swung to a loss in the first three months of the year, but continued to reduce its debt at a rapid rate while making impressive progress in reducing its costs, The Globe and Mail’s Ian McGugan reports.

The Toronto-based gold producer reported on Tuesday that it lost $83-million (U.S.) during the first quarter, which it said primarily reflected the impact of one-time foreign currency losses. In the same quarter last year, the company made $57-million.

Trade growth around the world is unlikely to regain the torrid pace of the years before the global financial crisis, Bank of Canada Governor Stephen Poloz warned today in New York.

That means the days of 7-per-cent annual growth in international trade are gone, perhaps for good, Mr. Poloz said in remarks prepared for a speech to Wall Street financial professionals, The Globe and Mail’s Barrie McKenna reports.

Several other companies are reporting corporate results today, too.