Analysts expect the Canadian dollar to continue its record-setting performance from here on in.

That’s record-setting in terms of down, having hit a decade low last week when it lost a further 0.6 per cent.

Just about everything is feeding into the loonie’s slide, from sinking oil prices to the expected divergence on interest rates by the Bank of Canada and the Federal Reserve. Add into that a coming election.

“The renewed slide in oil, with [West Texas Intermediate] moving below $50 for the first time since April, weighed heavily on the beleaguered currency,” senior economist Benjamin Reitzes of BMO Nesbitt Burns said of the loonie’s showing last week.

“The broad drop in other commodities isn’t helping either,” he said in a research note today.

“Pile on top of that markets pricing about 50 per cent odds of another BoC rate cut and the Fed likely moving the other way by year end, and the outlook isn’t good for the loonie. Political uncertainty heading into October’s federal election is just one more negative.”

While forecasts differ, Bank of America Merrill Lynch now sees the loonie tumbling to about 74 cents by early next year along with another Bank of Canada interest rate cut.

While some other observers see it perking up to about 80 cents by the end of next year, Bank of America’s Emanuella Enenajor doesn’t see it that way.

“Instead, we think the Street is simply underestimating how much more room USDCAD has to run higher in an environment of weak Canadian growth and divergent monetary policy,” she said in a report, referring to the U.S. dollar versus the loonie by their symbols.

Bipan Rai, director of foreign exchange at CIBC World Markets, agreed that the loonie could well sink to 74 cents as the “path of least resistance” still suggests a softer currency.

“Simply put, incoming economic data are still weak and suggest that the effects of the crude price shock are still filtering through,” he added. “Additionally, we expect further weakness in the loonie to be driven by a stronger USD as we approach rate hikes from the Fed that should see yield spreads move against the CAD.”

Much is at play this week, said Alvin Tan of Société Générale, citing a “fitful dollar trend” where the U.S. currency is concerned.

That’s because the Federal Reserve meets on Wednesday, and the U.S. government reports on second-quarter economic growth a day later, both potential signals of when the central bank will raise interest rates for the first time.

A plunge in Chinese stocks today is rippling through global markets.

The Shanghai composite lost 8.5 per cent, its sharpest drop since 2007, despite earlier measures to calm China’s exceptionally volatile markets.

“It can only be called a complete capitulation considering the unprecedented government support,” analyst Jasper Lawler of CMC Markets said of the Shanghai plunge.

“Data showed China industrial profits fell 0.3 per cent in June after a year-over-year gain gain of 0.6 per cent last month. Although more government intervention is expected, the data show there is some link between stock market performance and real company profits.”

Feeding into all this are fresh concerns over Greece, an upcoming meeting of the Federal Reserve, and a flood of U.S. corporate earnings.

Teva Pharmaceutical Industries Ltd. has struck a $40.5-billion (U.S.) deal for the generics business of Allergan PLC, a move it says will catapult it into the top 10 in its sector.

“Our respective portfolios of generic medicines and applications are highly complementary, providing Teva with high-quality growth and earnings visibility, and the scale and resources to expand our specialty capabilities,” the Israeli company said.

The biggie is Wednesday’s Fed meeting, of course, and what the U.S. central bank signals on rate hikes.

But corporate earnings will also be flooding in throughout the week.

Where the Fed is concerned, markets will be watching for a signal on whether “lift-off” comes at its September meeting, as The Globe and Mail’s David Parkinson reports.

“The upturn in economic data and diminished downside risks from international developments are likely to be recognized in the communiqué accompanying the Fed’s interest rate announcement on Wednesday, which we expect to set the stage for a gradual normalization in rates beginning in September,” Toronto-Dominion Bank economist Ksenia Bushmeneva said in a lookahead to the meeting.

For Canada’s economy, it almost doesn’t matter what Friday’s report on GDP shows.

The Bank of Canada has already said it believes the economy contracted again in the second quarter, and the Statistics Canada reading should bear this out, with a sluggish showing in May.

A monthly contraction - economists expect it will be flat or down by perhaps 0.1 per cent - would be the fifth in a row. 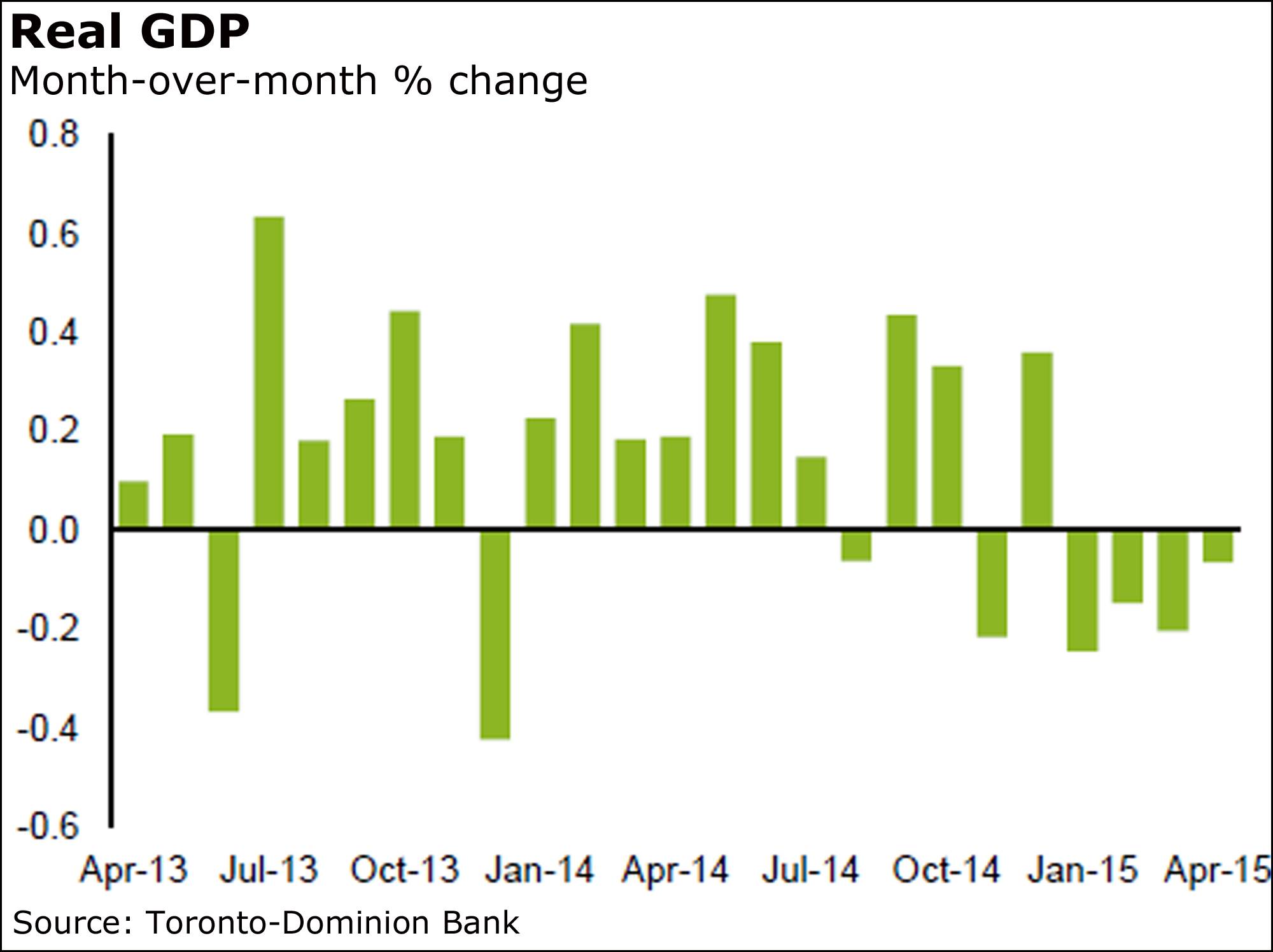 “We already know from monthly reports that volumes were down significantly in the manufacturing and wholesale sectors,” said National Bank of Canada economists.

“Oil and gas output may also have dropped considering disruptions brought by Alberta wildfires. However, we’ll probably get some offset from the retail sector if the reported improvement in sales is any guide.”

Aside from the Fed, and the Statistics Canada report, earnings season continues in full force, with several major U.S. and Canadian companies reporting quarterly results.

“The consumer and technology sectors have been strong on the whole, while health care has been the real standout with more than 90 per cent of companies beating expectations.”

The Canadian government’s child benefit payments will help juice the flagging economy to some extent, but longer-lasting growth will depend on more than just this new “shiny cheque,” CIBC World Markets calculates.

How it all plays out over the next year will be determined by what families do with these newly found billions, but the overall boost over four quarters won’t be huge, CIBC economists Avery Shenfeld and Royce Mendes said in a recent report.

“It will help, no doubt, but for sustained growth, we’ll need more than just a shiny cheque to an already indebted household sector,” they said.

Their findings are important because Canada is believed to have just come through straight quarters of economic contraction in the wake of the oil shock.

And with provincial governments holding the line, and some hiking taxes, the heavy lifting is now being done by the Bank of Canada via two interest rate cuts this year.

There are different scenarios where the monthly child support payments are concerned.

Remember, the payments for the first six months of this year are coming in a lump sum worth almost $4-billion.

So if consumers spend all of that money on Canadian goods and services, which CIBC described as an “extreme” scenario, gross domestic product would benefit by 0.8 per cent in the current third quarter, or 3.2 per cent at an annual pace.

That extreme is relative to what economic growth would have been had the previous child tax credit system continued, explained Mr. Shenfeld, CIBC’s chief economist.‎ But the fourth quarter would then suffer, by 2 per cent, if consumers are still “that myopic” after the next election because payments would then be monthly, rather than the earlier six-month bonanza.

There would be another hit in the second quarter of next year “as families end up paying taxes on these new benefit cheques, and Canadians no longer get to claim a child tax credit as they file their 2015 taxes.”

Under another scenario, of course, consumers would be more “far-sighted,” planning their spending through four quarter, which would mean a boost to GDP of just 0.3 per cent over the course of 12 months.

Or just 0.2 per cent when you take into account the impact of provincial tax increases, primarily in Alberta.

“So whether it’s a roller coaster or a ripple, don’t count on a huge lift to overall growth in GDP over the next four quarters as a whole,” said Mr. Shenfeld and Mr. Mendes.

Remember all this on Friday morning when you see the latest Statistics Canada report, which is expected to show that the economy flatlined again in May.