Toronto’s housing market is on fire, with prices projected to surge higher still.

June marked a record month for housing in Canada’s biggest city as sales climbed 18.4 per cent from a year earlier to 11,992, the Toronto Real Estate Board said today.

The benchmark Multiple Listing Service price climbed 8.9 per cent in the same period, while the average price rose 12.3 per cent to $639,184.

“High-end homes have accounted for a greater share of overall transactions this year compared to last year,” the realtors group said.

“This is the key reason why the average selling price has increased at a greater annual rate than the MLS HPI composite benchmark,” it added, referring to the home price index that is deemed a better gauge of market action.

The average price of a detached home in Toronto’s 416 region, so-named for its telephone area code, surged 14.2 per cent to $1.05-million.

Along with Vancouver, Toronto is the city most deemed to be frothy.

Vancouver is also coming off a record month.

“No doubt, galloping home prices in two of the least affordable cities in Canada have supported demand in these two regions,” said senior economist Sal Guatieri of BMO Nesbitt Burns.

“But the bigger question is whether the ‘side effects’ of the current (and future) low interest-rate environment will send the patient back to the emergency ward if (and more likely when) prices correct lower,” he added in a research note.

“Both cities will get another shot of adrenalin if the [Bank of Canada] cuts rates next week.”

And across the country, home prices are believed to be inflated by between 10 per cent and 30 per cent, according to Bank of Canada models.

Things you can do with a Greek bank machine

Wonder what it might be like to be back in school and labelled a “sustained and projected underperformer” by your teacher?

As The Globe and Mail’s Jane Taber reports, Standard & Poor’s Ratings Services cut Ontario from AA- to A+ yesterday, citing its deficits and debt.

(In this case, by the way, an A+ definitely does not mean the same thing as in school.)

“The downgrade reflects our view that Ontario is a sustained and projected underperformer on its budgetary performance and debt burden versus domestic and international peers,” S&P said.

Ontario’s net debt is projected to near 40 per cent of gross domestic product by the next fiscal year, noted senior economist Robert Kavcic of BMO Nesbitt Burns, adding that the ratio has climbed faster than any other Canadian province since before the recession.

“Note that 10-year yield spreads versus Quebec (also A+) have been gradually narrowing for the past two years, as the latter has taken a more aggressive tack toward fiscal restraint and political uncertainty has faded after the PQ defeat,” he said.

“What good is a Greek holiday with no money?”IG analyst Joshua Mahony

Officials of the euro zone were back at the table today as Greece struggles for a new deal after Sunday’s referendum rejecting the demands of its creditors.

First up were finance ministers from the monetary union, to be followed by political leaders.

“How long we’ll have to wait until we get credible reports of how the talks are going isn’t clear but despite signs of a gap between French and German positions - with the former more sympathetic to the notion of debt restructuring - it’s hard to get optimistic about the outcome of these talks or about the future of Greece in the euro zone,” said the chief of foreign exchange at Société Générale.

“With the creditors divided amongst themselves and the combative Alex Tsipras back to the negotiating table, today’s emergency summit could go either way,” he said.

“On the one hand, news that France has joined the [International Monetary Fund] and alluded to possible debt relief should be a bullish point,” he added.

“On the other hand, however, Merkel is facing huge domestic pressure to just cut Greece loose.”

Canadian exports slumped 0.6 per cent in May, driving the country’s trade deficit to $3.3-billion.

Today’s report from Statistics Canada is more evidence as economists piece together how the economy fared in the second quarter of the year, after a contraction of 0.6 per cent in the first three months.

“After a run of GDP declines through to April, the trade data were the first major indicator for May activity, and it ain’t look’ good,” said CIBC World Markets chief economist Avery Shenfeld.

The May deficit widened from April’s $3-billion as imports inched up 0.2 per cent.

On the export side, volumes fell 2.5 per cent, while prices rose 1.9 per cent. Import prices dipped 0.1 per cent, though volumes rose 0.3 per cent. 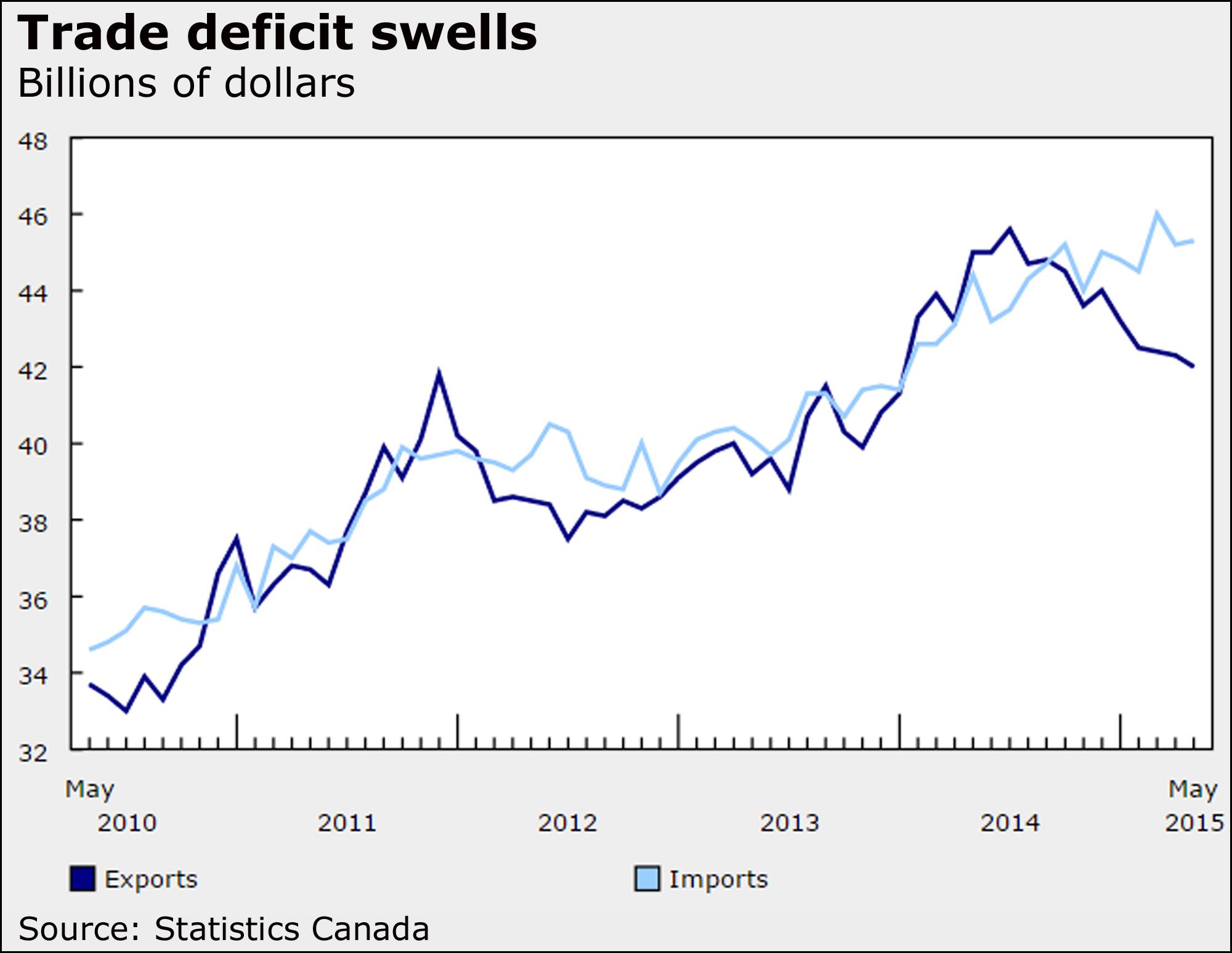 The export slump was the fifth in a row.

Energy exports rose, though those in several other areas dropped.

“All told, the weakness in volumes on the export front will have markets worried about May GDP, although we still expect better news from other categories like retailing,” Mr. Shenfeld said.

“That’s one more chip on the side of our forecast for a rate cut by the [Bank of Canada] next week, with Friday’s employment data still one more hurdle to cross.”

Will they or won't they?

Indeed, a growing number of market watchers now believe the Bank of Canada will cut its benchmark rate as early as next week given the sour readings on the economy.

Some others don’t see that happening, and still others say it’s a crap shoot.

But David Tulk, for example, the chief Canada macro strategist at TD Securities, is among a handful who have projected over the past week that Governor Stephen Poloz and his central bank colleagues will trim a further quarter of a percentage point from their overnight rate.

That would bring the key rate down to just 0.5 per cent, given the similar cut in January that took markets by surprise.

Such predictions have mounted since Statistics Canada reported last week that the economy contracted 0.1 per cent in April, kicking off a second quarter that was supposed to have marked a rebound from the first-quarter slump.

The fear is that the entire second quarter will show a contraction, thus meeting the technical definition of a recession, though one that presumably ended last month if there was one at all.

“While oil prices are no longer in freefall, the hit to the economy has been larger than what the bank had forecast while the positive offset expected from stronger non-energy export volumes has yet to materialize,” Mr. Tulk said.

“With a very real risk of a technical recession over the first half of the year and an outlook for the second half that remains tepid and laden with downside risk, we now expect that the bank will cut its overnight rate by 25 basis points to 0.5 per cent at the July fixed announcement date.”

Deputy chief economist Benjamin Tal of CIBC World Markets noted that the economy would have needed to eke out monthly economic growth of 0.2 per cent and 0.3 per cent in May and June, respectively, just to make it to the zero mark.

“But can the BoC really save the day?” Mr. Tal said.

“With rates already so low, one must question the effectiveness of another rate cut.”

Canada’s pain, Mr. Tal said, is “narrowly based,” and there’s some doubt that Alberta could be helped by a rate cut.

He’s not so sure of the broader impact of another cut, either.

“Perhaps monetary policy is as loose as it can be and it’s time for fiscal policy to lend a hand,” he added.

“For now, however, it seems that for the federal government, balancing the books is more important than helping a central bank that gets more and more depleted with every basis point of easing.”

Don't know your spouse's salary? You're not alone